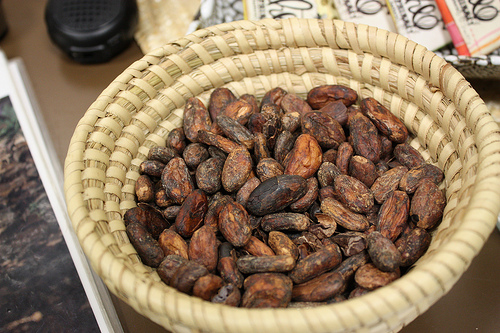 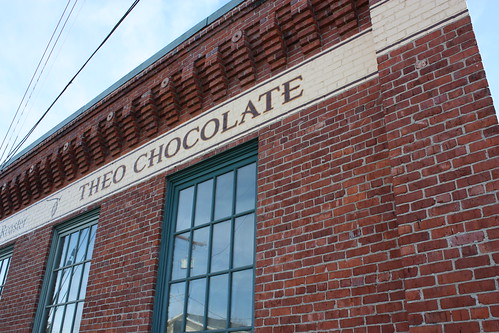 I have a confession. It’s kind of a doozy. Are you ready? Here goes …

Is that a straight jacket? OH DEAR GOD WHY DO YOU HAVE A STRAIGHT-JACKET?

No, no – don’t tell me. I don’t want to know. The point is, I’m not wearing that thing. I haven’t gone completely bonkers, okay? Plenty of people don’t like chocolate. Courtney Love recently went on a rant about how she can’t touch the stuff.

Okay, fine. I realize that example doesn’t really work in my favor.

It’s not that I hate the stuff. I appreciate a good s’mores, and I can make a chocolate cake that will literally make your head spin (provided you eat it while swirling around in the spin cycle of my washing machine). But I’m not obsessed with chocolate. Truth be told, it gives me a headache, eating it makes me weirdly hungry for EVERYTHING IN MY FRIDGE, and frankly, I prefer vanilla.

There. I said it.

What? No, NO I DO NOT THINK THAT LAST STATEMENT MAKES ME A RACIST.

And yet, despite all of my reservations against chocolate, I enjoyed the Theo Chocolate Factory Tour. While my friend Katie was visiting Seattle from California, we decided to check it out. Though I had had Theo chocolate before, I’d never been to their plant (which is located in the quirky little hood of Fremont), so I braced myself for awesomeness of Willy Wonka-esque proportions.

But we did get to wear hair nets, so there’s that.

Our tour guide was a cheerful woman who was incredibly sweet, upbeat, and competent. She explained that most chocolatiers in the U.S. aren’t chocolate makers – they are merely chocolate melters. Melters purchase their chocolate already made and then melt it, adding in flavorings and ingredients.

Theo however, is a chocolate maker – meaning they handle every step of the creation of their chocolate from bean to bar. 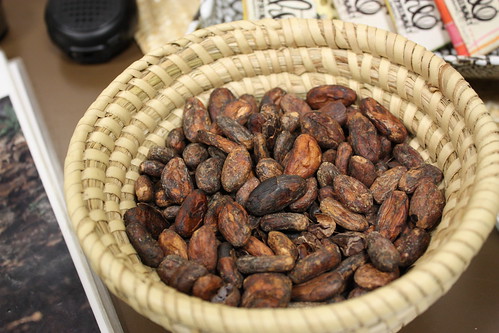 And yes, they let you sample everything. It was quite lovely right up until it gave me a raging headache. 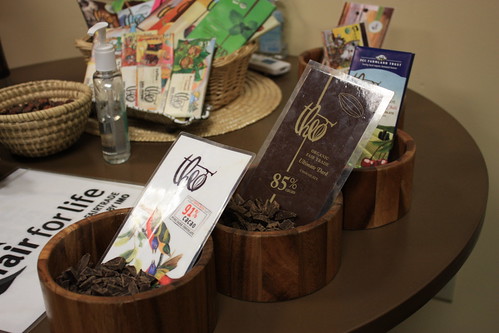 The tour took us right on to the factory floor where we encountered giant tubs of cocoa beans: 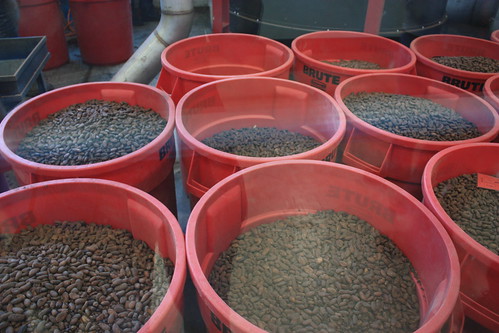 And where this cheerful fellow was scraping melted chocolate out of a machine: 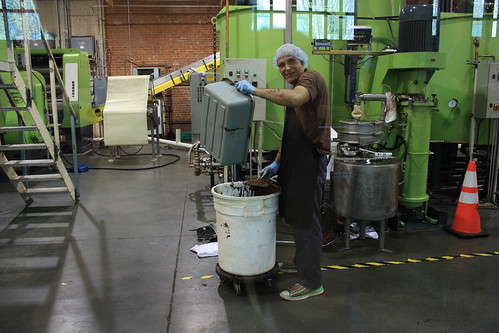 We gained all sorts of knowledge that’s useful to have during chocolate-themed trivia nights (of which there are none). Like how white chocolate isn’t really chocolate (which, not to brag, but I already knew). And that chocolate is actually a fermented food. That’s right: the beans used to make chocolate are left to ferment for about a week (don’t dwell on the thought).

Fear not: if this happens, it is still safe to eat. I repeat, you can still eat your bloomin’ chocolate.

The tour walked us through the entire chocolate-making process. Here’s the abbreviated version: 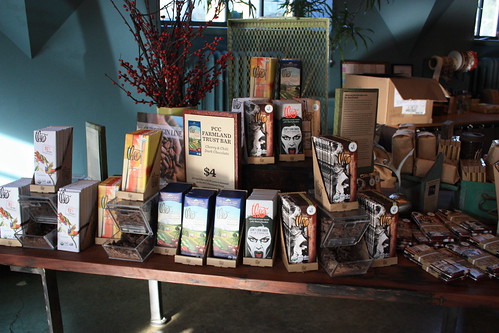 The finished product, some of which, rather inexplicably, are covered with vampires despite it being the middle of spring.

The tour took us about 45 minutes, and includes a discount for any of the handmade confections on sale in the store. Plus, you get to try nearly every single chocolate bar that Theo makes. It’s perfect for a chocolate lover.

And for a gal who’s merely a chocolate liker? Well, I got a kick out of it, too. And lots of free samples. And a headache. But let’s not dwell on that last part.

The Essentials on the Theo Chocolate Factory Tour: