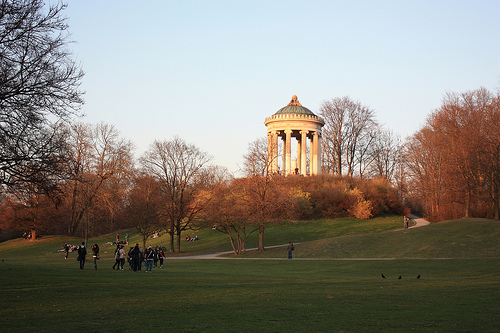 The English Garden (or Englischer Garten, for those of you who insist on showing off the B you earned in high school German class) is a massive public park located near downtown Munich.

It is called the English Garden because it harkens back to a sort of informal landscaping style that was popular in the U.K. during the 1800s. But mostly the name just served to confuse me because 1.) I was leaving for London the next day, and I kept thinking I was already there, 2.) I didn’t understand why everyone in London was speaking German, and 3.) I really, really wanted some tea with scones, and THERE WEREN’T ANY.

The level of disappointment I felt was severe, but not so bad as the time I found myself in Rome and realized that there were no churros to be found anywhere near the Spanish Steps. That was a dark day indeed. (Shudder.)

And still, despite the dearth of English sweets, I found the park to be delightful, which is no small thing. It may have helped that I had spent the afternoon eating my weight in candied almonds which I had purchased downtown. And it might have helped that Rand was there, too. That afternoon was one of the rare ones where my husband caught me as I was dashing in and out of our hotel room, learned where I was off to, and, after staring at his computer for a few long moments, said the words I always love to hear:

Next to “Let’s get gelato” and “I’m still hungry, let’s order something else,” there are few things that come out of his mouth that make my heart flutter more. You must forgive me, then, if my impression of the English Gardens is a little bit biased. If it seems like I saw the entire place through rose-colored glasses, it’s because I did. The sky was coral, the grass was green, and the air smelled of smoke and leaves and flowers.

We climbed up to the Monopteros – a small Greek temple on a hill. Dusk was approaching, and the temple was practically glowing in the later afternoon sun. There were clusters of people hanging around, smoking cigarettes and having intense conversations about (I assume) the deep and profound things that occupy the minds of Europeans. The light was near perfect. Had I been able to take a single in-focus photo … well, just imagine how amazing it would have been. Instead, I took these, which I’m still pretty happy about: And I took a series of photos during which I forgot that I was zoomed in: This is kind of amazing.

The view of the rest of the park from up there was pretty fantastic, too … But I kept getting distracted, because in the fading light, Rand looked like the star of a black-and-white movie. Eventually, we headed down, to see more of the park. We walked by the creek … And past the Chinese Tower … And for a good while, we just wandered. Someone played a guitar, and someone juggled, and under a tree two people sat kissing. Believe it or not, it wasn’t even us. The English Garden is lovely. I can’t guarantee that you’ll like it as much as I did. But go on a sunny day, and go with someone who you love, and you might find that it’s the best place ever. Even if they don’t have scones.

The Essentials on the English Garden in Munich, Germany