Today’s post is by my friend Dan, on whom I have a little crush. You might remember Dan from my account of our trip to the Oregon coast a million summers ago, or from his other brilliant guest posts on the blog.

Sadly, it won’t work out between us. Dan’s already madly in love with my friend Mike, and besides, I kind of want to see where this thing with Rand goes. Oh, well. We’ll always have Astoria, Dan.

(Oh, and psst! If you want to read more of his adventures, check out his blog, Speak of the Daniel).

One of the things I love about travel is that it’s always an adventure. And like any great adventure, the best journeys are full of exploration, discovery, and surprise (just not the “Surprise! We sent your bags to Tbilisi!” kind of surprise).

It was during one such adventure that I uncovered what was possibly the most delightful surprise in all of my (rather limited) experience as a world traveler.

My first time in Italy was also the first time I ever heard of a place called Cinque Terre. It happened two summers ago while my boyfriend Mike and I were vacationing in Florence. Mike had assumed the task of putting together a list of potential daytrips. Having spent a college semester in Florence, he was fairly well acquainted with the city and surrounding region. I, on the other hand, was clueless …

Dan: “Cool. Maybe we can check it out while we’re here.”

Mike (to himself): “Well… at least he’s handsome.” 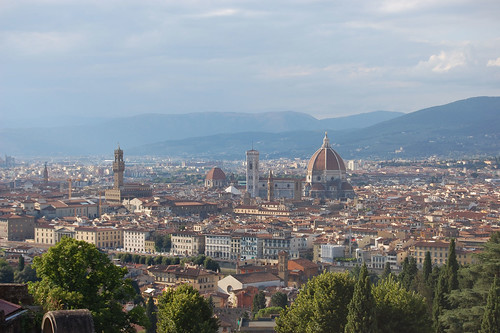 To me, “Cinque Terre” was just another Italian-sounding name on Mike’s list. I vaguely recognized the other names on the roster. There was the place named after the brownish crayon. And the other place from that movie with Cher. (I know. The culture just oozes out of me). But the name Cinque Terre failed to ring any of my oh-so-worldly bells. All I had to go on, really, was Mike’s cursory description of “five picturesque coastal villages linked together by a series of scenic hillside hiking trails.”

Now, even though the words “hillside” and “hiking” and “trails” were right there in the description, my imagination conjured a slightly different image. I envisioned something akin to a long, leisurely walk along the sea; a village-by-village stroll down some gently winding path that played the role of charming alternative to paved road and rigid walkway. We’d meet carefree couples on tandem bicycles, playful pups chasing tossed rubber balls, and barefoot children racing each other to the next gelato cart (that’s a thing, right?). The idyllic serenity washed over me just thinking about it.

But, in a manner predictable to no one (except, you know, anyone with access to a weather report), this sunny fantasy began to dissolve the morning of our departure. The heavy rain clouds that chased our train all the way from Florence to Monterosso were threatening to wash away any hopes of an enchanting outdoor excursion. Not a promising omen, but we pushed forward anyway.

Arriving in Monterosso around lunchtime, and in the midst of a drenching downpour, we ducked into a small cellar-bistro for both food and shelter. 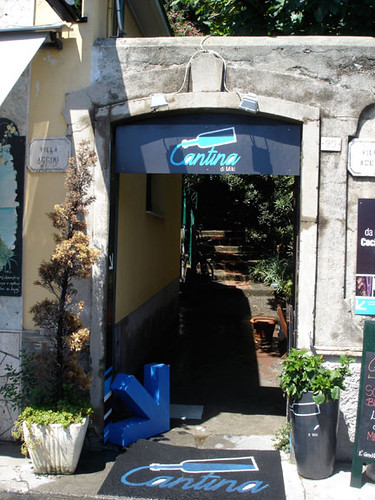 We just followed the blue arrow.

Resigned to the nasty weather, we reluctantly prepared to scrap our day of breezy seaside exploration. The disappointment was palpable, and the rest of our afternoon looked pretty gloomy. But it wasn’t all folly – the food was outstanding. 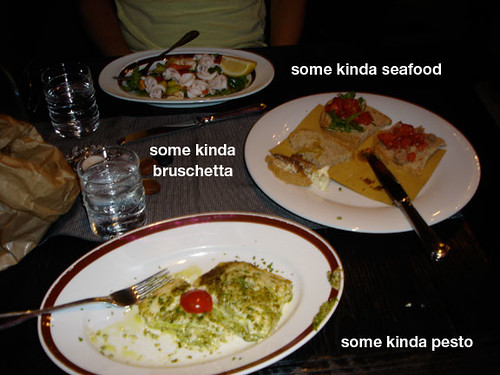 All kinds of awesome.

A mere hour later, Mike and I emerged from our windowless eatery squinting in the glare of a newly clear sky. Suddenly, the street was teeming with sunglass-clad villagers. From seemingly nowhere, dozens of sunbathers and surfers had taken to the nearby beach. The grey, cloud-draped surface of the Mediterranean had turned deep blue and now stretched all the way to the horizon. For Mike and me, it was a gay-cation miracle. “Game on,” we declared. 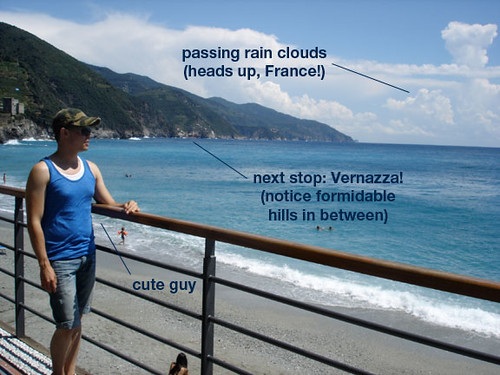 Our ensuing hike – and I do mean hike – began much as I’d imagined it. As we strolled toward the outskirts of town, everyone seemed to be making the most of this picture-perfect summer day. But as we started up the trail, we began to realize what we were getting ourselves into: “Um, where are all the bikes? And the dogs? And the children? And why is this trail getting so narrow? And rugged? And steep? And when did it get SO DAMN HOT today?”

Neither of us was prepared for what soon felt like a treacherous expedition. Ninety-plus minutes of slippery rocks, muddy slopes, prickly overgrowth, ancient and near-vertical stairways, and sparse shade from the unforgiving August sun proved an unexpected challenge. I know. We were hardly scaling Kilimanjaro. But this hike was a far cry from the graceful waltz down the beach I’d anticipated earlier. It was like expecting a side salad and then being run over by a produce truck. But on the plus side, the coastal scenery was breathtaking. Also, Mike took off his shirt.

It was at the end of this trek that we stumbled across my incredible surprise. Having burned through every carb absorbed at lunch, we approached the next village, Vernazza, sweaty, exhausted, and parched (because some fool decided that lugging clunky water bottles along the trail would be an unnecessary burden). But I found myself instantly revived by the sight I beheld from the hillside overlooking Vernazza.

A bit of preface: A year or so before our trip, I was thumbing through some random magazine when a full-page ad caught my eye. I have no idea what it was advertising, but it was the image that grabbed me: A tiny, picturesque village nestled on a rocky seaside outcrop. A cozy, boat-filled harbor lapping at the town’s central square. And a pastel rainbow of quaint facades softly glowing in the setting sun. I’d never seen the place before, and had no idea where it was. But I remember being amazed that such a place existed somewhere on Earth. It looked, for lack of a better word, heavenly. But it seemed so small and obscure and unattainably perfect that I couldn’t imagine ever actually finding the place. Part of me even doubted the place existed at all – just a Photoshopped mirage, perhaps. This enchanting image escaped my consciousness soon after.

As I’m sure you’ve guessed by now, the picture was of Vernazza – the very real village I was now gazing into with unbelieving awe. There it was, right in front of me. I had discovered my vision of Heaven on Earth without even looking for it. It was like suddenly finding that one great song whose name you never bothered to learn, but had spent ages shuffling around in the back of your head. (This also happened to me recently, and it was a genuine thrill. I’m a man of simple joys).

In a near-ecstatic trance, I just stood there, taking it all in. I explained to Mike what I was so worked up about, and fortunately, he had the presence of mind to snap some photos of me and my new special place. We were still thirsty and exhausted, but Mike got it. He gave me all the time in the world to savor this magical moment.

Now, as a world traveler, I’m a relative novice. And I know nothing of the future travel adventures that await me. But fairly I’m certain that this one moment will forever place high among my all-time greatest travel experiences. 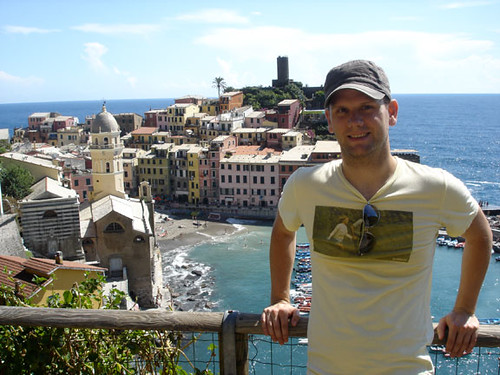 Dan and his special place.

After one long last gaze, Mike and I wandered down into the village for much-needed water and much-craved gelato. We poked around a few of the little shops, and sat for a while on the beach. It was a rejuvenating respite. I was still basking in my surprise elation, while Mike was basking in gelato-filled contentment.

When it was finally time to move on, one of us asked the other if we were ready to make our way down the rest of the trail, and through the remaining three villages.

The look on both of our faces said it all. Not a chance.

We hopped onto the next train, and made our way back to Firenze.

Vernazza and Monterosso suffered a major landside and significant damage in the fall of last year. The towns have recently reopened, after months of rebuilding (which is still ongoing). The local businesses there need tourism revenue now more than ever to get back on their feet – as if you needed more of an excuse to visit the Cinque Terre.