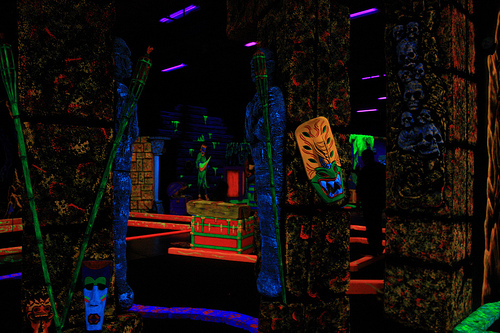 You won’t believe how many words I need to describe what this is.

It’s not easy being Portland. Staying on the cutting edge of weird, on the forefront of WTF, can only be exhausting. The city is constantly inventing, perfecting, and growing tired of things that won’t reach the rest of us until months or even years later.

They are the connoisseurs of pastimes we don’t yet know exist.

The problem is, everything’s been done already. The pressure to come up with something new must be overwhelming. I’ve a theory of how Portlanders deal with this.

First they grab two top hats (obtaining said top hats is relatively easy. Most people who live in the Northwest have at least one, and I’m pretty sure the city sends you another when you move into the greater PDX area). In one hat, they put a bunch of slips of paper, filled with a myriad of nouns. Olives. Kabuki. Rumspringa. The other hat is similarly filled with slips of paper, this time with descriptive words written on them. Freestyle. Solo. Cold-pressed.

To find the next great Portlandian hobby, one must merely pick a slip of paper at random from each of the two hats.

Occasionally, though, there’s a glitch in the two-hat system. Someone gets a little crazy. Instead of one slip of paper, they reach in and pull out five, or six. At least, this is what I assume happens. Otherwise, there’s no other explanation for Glowing Greens (caution: open that link, and you’ll hear shrieking seagulls). The list of descriptive words before the avocation is just too random, too absurd. No, I’m not kidding.

On our last trip to Portland, some friends invited us there (we were joined by some short freeloaders who cheated the entire time). About halfway through the list of adjectives, we’d already said yes. If it’s underground and glow-in-the-dark, I’m in. Make it 3-D, pirate, and miniature, and I’ll buy a season pass. I don’t care what is it. It could be a laundromat (and knowing Portland, it probably soon will be). The funny thing about Glowing Greens is that once you get all those ridiculous descriptors out, there’s little else left to say about the place. It’s fun. It’s silly. It’s moderately creepy for small children, and the 3-D glasses give you a miserable headache if you leave them on for too long. And skulls. Lots of skulls.

The balls glow-in-the-dark, too, which is convenient, particularly for the all the little ones who keep stealing or moving them (at one point, I didn’t even have to keep sinking my putts, because a tiny pair of hands kept rolling my ball in for me. I’m not complaining. That must be how royalty golfs). No one kept score, and there was a large amount of cheating going on. Purists would cringe, I’m sure.   But then again, who’s to say that Glowing Greens isn’t the truer version of the sport?

Maybe real golf is the imposter here. Maybe it’s too regular-sized. Too above-ground. Too … not glow-in-the-dark. And there is definitely a dearth of pirates. Definitely.

In fact, regular golf is so weird, with its pom-pom club protectors and argyle socks, I suspect it might become the next rage in Portland. It will take months, maybe years, before the rest of the world catches on. And by then, Portland will have moved on to something even crazier, I’m sure.