Skip to content
Posted in: Loving the Entrepreneur, Nothing to Do With Travel, Random Musings 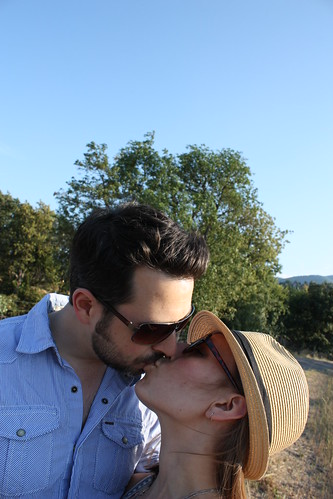 We are at a get-together with friends. Let’s say a birthday party for … whoever. It doesn’t matter, really – it’s happened so many times that it could be any event. We’re having fun, but as the night trickles on, I’ll see him check his watch nervously, and then his phone. He might answer a few emails. Or possibly take a quick call.

And finally, with a half frown he’ll say, “I’m sorry, guys. I have to get going.”

I sigh, but since I know it’s coming, I’m not too upset. If I’m tired, I’ll turn in as well. Often, I stick around without him. If I stay, people will ask where Rand’s gone.

My husband, obviously. The CEO. The entrepreneur.

All of those words sound funny. Like they should be used to describe someone much older. Someone who doesn’t pout when I accidentally wash brownie batter out of the bowl before he can eat it. But weirdly, they apply to Rand. And have for years.

“Do you miss him?” A few considerate folks will ask, when they learn of his schedule.

It’s a fair question, I suppose. But the thing is, I’m with Rand a lot of the time. We live together. We go on the road together. The answer really should be no. And yet, when they ask, all I can say is yes.

Holy crap, yes. I miss him constantly. I miss him when he’s in the other room. I miss him right now, even though I just spent the last two weeks with him and he’s only gone to California for a few days. He’s always working, always running off somewhere. Always tugging at those damn heartstrings of mine when he leaves a room. The ass.

There are times when he is hugging me close and I will say, “Come here.”

And he’ll reply, “I’m here. I literally could not be more here than I presently am.”

But I insist. If I press the point too much, he will get up and sit on my chest. I laugh and struggle to breathe and toss him off me. And then, within seconds, I start scooting over to him again. 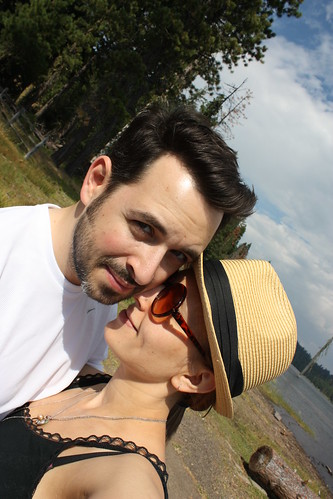 I was in serious danger of being sat upon.

That I still can miss him so acutely, even after ten years, has been perhaps the biggest surprise. But it’s not the only one. Our relationship grew alongside his company. In a lot of ways, I knew exactly what I was getting into. But there were things I didn’t anticipate. Some of them wonderful. Some not quite as. I’m grateful for all of them, though. Because if any of these things were missing, our relationship would be different. And I like it just the way it is.

Here are the things I didn’t know when I started dating an entrepreneur.

1. I would miss him constantly.

There’s a song that reminds me of Rand. The chorus goes, “I love you like a madman. I miss you all the time.” It’s that simple, really. But I’ve reasoned that the minutes I spend with Rand are better than hours spent with anyone else. So how, really, can I mind?

2. Haters are gonna hate.
I have my own share of them on this site. They’ve told me everything from how I don’t deserve Rand (Well, duh, assholes.) to what a talentless moron I am (Meh. That’s not a requirement to be successful on the internet). I deal with them. I don’t mind them nearly as much as Rand’s haters. Mess with me, and that’s one thing. But mess with him? With his twinkly-eyed sincerity? It’s all I can do not to scream and heave my laptop down the stairs, before I remember: they’re wrong. I know him better than they do. This is undeniable. They aren’t the experts on the innerworkings of his soul and brain. They don’t know how he looks when he wakes up in the morning. They don’t know his face when he’s happy. I do. And I know he’s wonderful. So screw anyone who thinks otherwise. 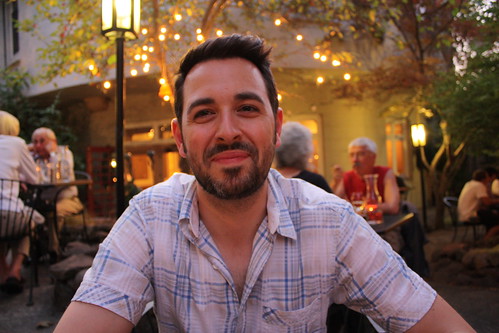 I’m the expert on this topic.

3. We’d rarely go to bed at the same time.
I fall asleep to the glow of of his office light creeping in around our closed bedroom door. If I listen carefully, I can hear the click of his computer. It helps me sleep. On the rare night that he goes to bed before me, or at the same time, I have trouble nodding off. It’s too quiet.

4. I’d feel envious of him.
I’m ashamed to admit it, but it’s true. It wasn’t that I wanted to be doing what he was, or that I wanted what he had. It’s just that he’s always known what he wanted. Always been so sure of it. He’s never sat on a stair with his head in his hands, wondering what the hell he was doing with his life.

5. I’d learn to speak his language.
I’m not fluent in startup, mind you. Or SEO. But I pay attention. I read his blog, I get to know his friends from work, I sneak into a session or two at the conferences where he speaks. I know enough that, when we go out to dinner with his colleagues and they talk shop, I am not left out. This was as much for me as it was for Rand. I don’t like not being able to understand the locals.

6. There would be times that I wouldn’t be able to help.
I would feel powerless. There would be – and still are – things that I can’t fix. So instead, I listen. And offer stupid suggestions. Not because they’ll help, but so he knows I care. And then I make him brownies, and when I do, I’m careful not to wash the batter out of the bowl until he’s done with it.

7. I’d need to find an equivalent passion.
For a while, it was my job. But after getting laid-off, I realized I needed to be as excited about something as Rand was about his work. So I started blogging. I did my own thing. And, as I stayed up late, working on a post that I couldn’t ignore until it was done, I understood. This is what drives him. It’s a kind of wonderful madness. 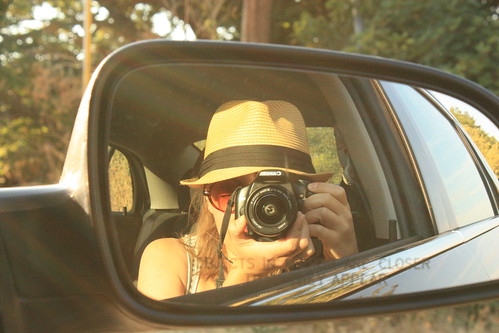 8. Our problems didn’t amount to a hill of beans.
“What did you mean when you said that?” “I thought you were ignoring me.” And on, and on. God, it’s all so stupid. I suspect Rand starting his own company is why we fight so rarely. Because time is scarce, and you can’t spend it arguing. Not when he needs to figure out how to be profitable. Not when so many other people are involved, working days and nights to make sure things are okay. You forgot to mail the letter I gave you? So what. Screw it. Let me edit that blog post for you. I think I saw a typo.

9. I’d become very good at meeting new people.
When I started traveling with Rand, we’d walk into a room filled with his colleagues, and he’d disappear. Run to say hi to someone, or get dragged into a conversation with a group. And I’d stand there, unsure of what to do. My only choice was to walk up to a group of strangers, introduce myself, and start talking. Or I could have run away, I guess. But god, I hate running. So instead I’d talk. It was excruciating. And it was one of the best skills I’ve ever acquired. Now when I go somewhere and know no one? I feel invincible.

10. Not everyone wants to be my friend.
This was one of the harder things I’ve had to accept, and I’m still not there. I want to know all of Rand’s coworkers. I want to hang out, find out what makes them tic, to learn all about the people who created this amazing, wonderful company he’s so passionate about. But not everyone wants to hang out with me – and yet, how can they tell me that? It’s such an awkward thing to say. So I force myself to step back. I let other folks set the terms of what our relationship will be. Friends. Acquaintances. Unspoken nemeses.

11. Prenups are par for the course.
His board of directors said that we needed one. In the unlikely event of our divorce, they didn’t want me to have voting rights over his company. So Rand and I agreed to split everything down the middle: Shares. Money. Websites. Cakes. Hearts. I relinquished voting rights. We signed forms. I don’t particularly mind. Neither does he. The bomb shelter is secure, but I figure we’ll never have to use it.

12. I could complicate things for Rand.
I’m lucky: my husband finds the nonstop stream of vitriol emerging from my mouth to be adorable. Other people not so much. I once told the board member of a prestigious national newspaper that modern journalism was “a bunch of crap” (I didn’t realize he was in the field at the time). I once had another high-profile CEO (one who, coincidentally, I worked for back when I was an admin) stare at me blankly before saying, “You don’t have much of a filter, do you?” I’ve occasionally made things worse for my husband, professionally. I know this. I’ve tried editing my thoughts. Tried being just a little more palatable. It’s hard. And he doesn’t seem to care, either way. But I do.

14. It never ends.
I once asked Rand what he’d do when it was over. When his company finally sold, or went public, or came to a close through some other, less desirable means. Without missing a beat, he replied, “Do it all again.” And that’s when it hit me: there will never be free weekends. There will never be a party that he attends until the end. But that’s okay. Because he will always have a twinkle in his eye. And I will always fall asleep to the sound of his keyboard clicking.

15. I couldn’t, and shouldn’t compete.
Look, my husband loves me more than the sun, but the sun is objectively more important than I am. There’s no disputing this. It’s the same with his company. I suppose if I made him choose, I might win, but what, really, would be the point? He loves what he does. It gives him meaning, is part of who he is. I could no more ask him to give it up than I could ask him to cut off his own arm. If I did, I’d be left with an incomplete Rand. Why do that, when I can have a whole him?

I didn’t know these things when I met him. They came up slowly, over the course of our relationship. And I’m grateful for them. These are the things that make us us.

There’s one last thing, too. I hope you’ll forgive me for how earnest it is. How stupidly sappy. But it’s this: Rand will often hug me and say, “I love all the parts of you.” 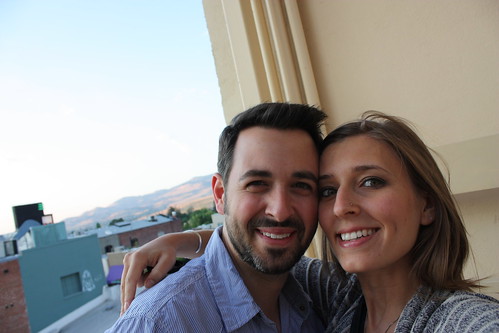 And that’s when I realize his company is part of him. It’s inexorably tied to his soul, his identity, his life.

So when I smile at him and say, “I love all the parts of you, too,” I know he understands exactly what I mean.