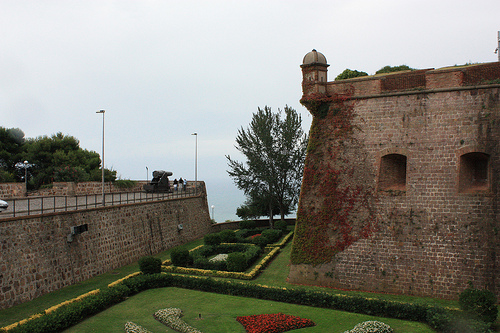 I hate making split decisions. They send me into a panic.

“AUGGGGGHHHHH! PUT IT ALL IN A BURLAP SACK.”

This tends to be problematic when, during our travels, I need to make an executive decision, and quickly.

Like when we found ourselves on a red bus tour in Barcelona. I’d been on one before when I went to Glasgow a while back. They’re kind of fantastic and tacky and touristy – just my thing. You hop on and ride the bus on a predetermined route throughout the city. Plug in your headphones and you’ll be able to hear an audio tour about all the destinations you pass. Notice that English is on channel 3, and I’m listening to channel 15. Which I think was Klingon.

You get to see tons of stuff, and can get off at any number of stops. Also, the buses can be the setting for a lovely bromance.

The only hitch is this: if you do want to get off the bus, you’ll only have a couple of seconds to do so. This becomes even more complicated if you are with a group of people.

Often, it’s hard to tell what exactly you’ll find when you step off the bus. Sometimes the route stops at something that sounds interesting, and then turns out to be a desolate and closed Olympic site.

And lest you think that last sentence is hypothetical: If you are lucky, you may get a photo opportunity out of the whole thing. I made everyone run up the steps while I hummed “Chariots of Fire”, so our visit wasn’t pointless. We were lucky enough to be standing so that it looks like Rand has an antenna coming out of his head.

Don’t worry, though – if you realize you’ve made a mistake and gotten off at the wrong stop, you’ll have plenty of time to turn around and watch your bus take off in a cloud of dust and exhaust. And then you’ll have anywhere from 15 minutes to a half hour to stand and think about this and countless other bad decisions you’ve made. “I shouldn’t have listened to Geraldine.”

Naturally, I wanted to avoid this as much as possible on the rainy day that we found ourselves exploring Barcelona (and I mostly managed to, after the Olympic Stadium debacle). I stared at the map as we rode through the city, trying to figure out where we should get off. And then I heard the announcement. We were at Montjuic.

And in an instant, a flood of memories of when I had visited it last, as a teenager, came back to me.

“Here?” he said, staring at a vacant roadside drenched in the falling rain.

“NOW!” I yelled. My split decision was made.

And we rushed off. The bus sped away, and as we stood in the drizzle, I felt a small wave of panic rush over me. Why hadn’t more people gotten off at our stop?  What had I gotten us into?

Taking a deep breath, I started walking to the only thing that looked like it might be a tourist destination.

“So, if we get tickets, we can take the funicular up the mountain to a castle that’s on top,” I said. I was bluffing, mostly, but no one seemed to noticed. And as it turned out, I was right.

The funicular is ridiculously cheap – about 5 euros for a round-trip ticket, and the views are glorious. Even on a grey and rainy day. I love how nervous everyone looks. I call it the “putting your trust in a lunatic” face. Or maybe it’s merely the “putting your trust in a very thin cable” face. And then we arrived, at the top of Montjuic, and the castle that was (fortunately) exactly as I had remembered it. For about 30 seconds, I was revered as a genius, right up until I proved unable to answer any of their follow-up questions in a satisfying manner:

Who built the castle? (No idea.)

What’s its function? (Um … it competes with EuroDisney.)

Can I have some of your Bugles? (For the third time, NO.) That’s the problem with split decisions during travel. You don’t actually get to do any research on the place you’ve suddenly decided to visit. But you still get to see something grand, that you wouldn’t have otherwise. For us, it was Montjuic. Even though we didn’t really know what we were doing there or what we’d find.

Later, I was able to fill in some of the gaps. Montjuic castle was built in 1640, by the Spanish. Its presence, high upon the hill, overlooking the water and the town was as much tactical as it was psychological. They were keeping an eye on the residents of Barcelona. It’s quite menacing, actually. During the Spanish Civil War, both sides took control of the site at different times, and so the Republicans and Nationalists both executed political prisoners here. Later, over the course of Franco’s regime, it served as a military prison, an army base, and lastly as a museum (which it presently is, though it is now under the control of the Barcelona City Council). Pretty sure this is a scene from a Bugs Bunny cartoon.

Because of the rain, we had the place mostly to ourselves. We walked around. We posed for as-yet-unrecorded album covers. We heeded the warning signs, which were delightful. I love that his camera goes flying.

And then we left the castle … Took the funicular back down to the bottom … And hopped back on the next bus. Ready, once again, to make another split decision. To risk another mistake. To have another adventure.