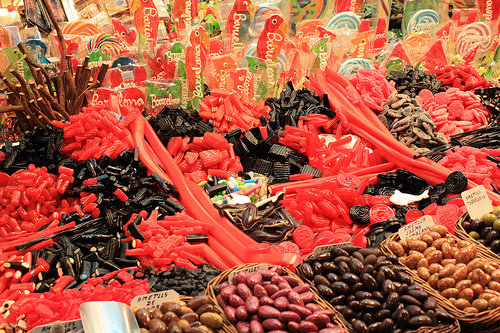 The gateway to temptation.

I am occasionally faced with a temptation that I, fortunately, have yet to act upon. My husband delicately describes it as “socially unfeasible.” I simply think it’s madness. Delicious, delicious madness.

The temptation is this: I want to eat food that doesn’t belong to me.

Now, before you start telling me that everyone feels this way, let me make myself clear. I don’t mean picking off the plate of some dear friend who is having lunch with me. Not at all. That’s completely fair game, and if we ever go out for a meal, you should expect that this will probably happen, and that your entree is mine for the taking (and vice versa … unless we’re talking about dessert, at which point you might lose a finger. Consider yourself warned).

No, I mean that every time I’m at a restaurant, and I pass a stranger’s table at which a plate of fresh, hot french fries has just been delivered, it requires all my willpower to not steal one. Or when someone I do not know is seated next to me at the movie theater, eating popcorn, I very much want to jam my hand into the tub and start shoveling the contents into my mouth. And when they stare at me, aghast, I will simply look at them, my mouth full, and mumble, “What?”

I’m not really sure what the penalty for this sort of behavior is. I don’t think I’d get arrested. I might be asked to chip in for the price of whatever I had stolen. But really, it’s only one fry. One handful of popcorn. One bite. What’s the worse that could happen? I haven’t tried. But it is so damn tempting, I suspect it’s only a matter of time.

If you are like me, and touched with a similar sort of gastronomical kleptomania, it might be best that you do not visit Mercat de Sant Josep de la Boqueria – a large public market in Barcelona.

The market, known often as simply “La Boqueria”, is located along La Rambla – the large walking street that cuts through the heart of the city. It’s been in operation in some form or another for nearly eight hundred years. In that time, I can’t have been the only one who walked through its aisles, nearly overcome by the temptation to plunge my hands into the bins. I wonder what happened to the others. Were they flogged? Exorcised? Sent to Portugal? (Note: I know nothing about Spain’s penal system.)

Because, surely, there must have been others. This place is so damn tempting. I mean, look at the candy stands: Half of these don’t even look edible and STILL I WANT TO EAT THEM. –
I mean, are you FLIPPING KIDDING ME? It’s an ENTIRE TABLE FULL OF CANDY AND IT’S NOT EVEN IN PACKAGES.  How, exactly, am I suppose to resist that? I struggled to not fall face forward onto it. We were sufficiently mesmerized. We left the candy aisle, only to encounter an entire row of shops dedicated to jamon. I could totally go for one of these in my house. In the interest of authenticity, I am completely okay with it being staffed by a handsome Spaniard. Something along the lines of Javier Bardem or Miguel Angel Silvestre will suffice (I’m not picky). There is a strict dress code in my home, by the way. If you look at all like Javier Bardem or Miguel Angel Silvestre, you have to go shirtless at all times.

I just completely lost my train of thought. What were we talking about? Oh, yeah. Temptation. Riiiight.

The rest of the food stands were, mercifully, less seductive. I felt no overwhelming impulse to start gnawing on whatever these fruits are. I only kind of wanted to dig my hands into this pile of snails. And desired to pet this ginormous dead fish only a little bit. (WARNING: GRAPHIC, BLOODY PHOTOS OF DEAD MAMMALS COMING UP NEXT. Vegetarians, may I suggest that instead of finishing this post, you take some time to enjoy this picture of noted-Vegetarian Peter Dinklage, looking spiffy at the Golden Globes?

And to be absolutely honest, I didn’t really want to touch these sheep’s heads at all. Except maybe I wanted to poke one of them in the eye a little bit. I say this not to be disrespectful. I just kind of wanted to, in the name of science. Maybe jiggle these brains around in their convenient plastic carrying cases (again, in the name of science). I managed to resist the urge, though. I touched absolutely nothing. I think I deserve some kind of reward for this. Something along the lines of a serrano ham stand run by Javier Bardem. I’ve proven that I have willpower. I’m pretty sure I could handle it.

I can look, but not touch. Really.