Note: Due to yesterday’s SOPA blackout (which I spent in my pajamas, eating M&M cookies and I REGRET NOTHING) this week’s WTF Wednesday is appearing today. Which, I’m told, is a Thursday. But really, who’s keeping track? 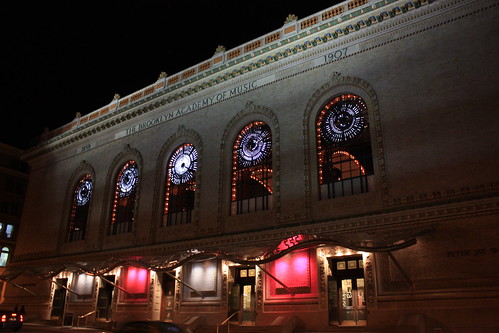 I began questioning authority at a tender young age. This is in no small part due to my Floridian primary school education, which could have caused the most obedient of children to stand up and scream, “WHAT IN THE HELL IS GOING ON AROUND HERE?”.

Like the time we had a musical performance about pioneer life, and we had to (I SWEAR TO HIGH HEAVEN THIS IS TRUE) recite the following lines:

And with each Native American tribe that we named, we were instructed to (and again, I’m not making this up, because even my imagination is not perverse enough to invent this) PRETEND WE WERE SWINGING A HATCHET.

It took me a few years before I was able to articulate how wrong the scene of a bunch of cute little kids singing “fighting off injuns” really was. Even at the time, though, I knew there was something amiss. And I put it in the only terms I knew how: “My mom,” I told a friend of mine, “is not going to like this play.”

And, bless her, she did not. (I believe her words were, simply, “Sweetie, that was really racist.”)

The experience left me with a lasting realization: sometimes institutions and people of authority (like my school and teachers) mess up big time when it comes to matters of race, and ethnicity, and not being total douchebags.

But I was still rather shocked when I saw this bit of stonework on the facade of the Brooklyn Academy of Music in New York: 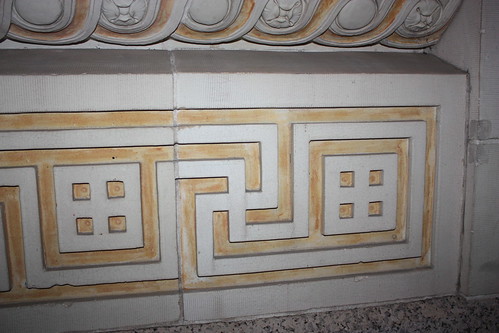 You can begin feeling uncomfortable now.

“The swastika right there.”

Just a design? JUST A DESIGN?! How was he not enraged? Why wasn’t he already mobilizing a protest to camp out on the steps on the venue and demand that they sandblast that white supremicist bullshit off the front of the building, immediately? Why didn’t he just tell his music teacher that he didn’t want to say ‘injun’ and sit out the rest of the play?

Err. Okay, that last one might be about me. But still.

I soon realized, though, that Rand was right. The Brooklyn Academy of Music was built in 1907 (as I stepped back and took a look at the entire building, I could see the date right across the front) – years before the Nazi party starting running around ruining things for everyone. At most, the design on the front of the building was homage to the Hindu symbol.

It was, theoretically, no less creepy than this pudgy cherub, which adorns the front of the building just adjacent to the swastikas: 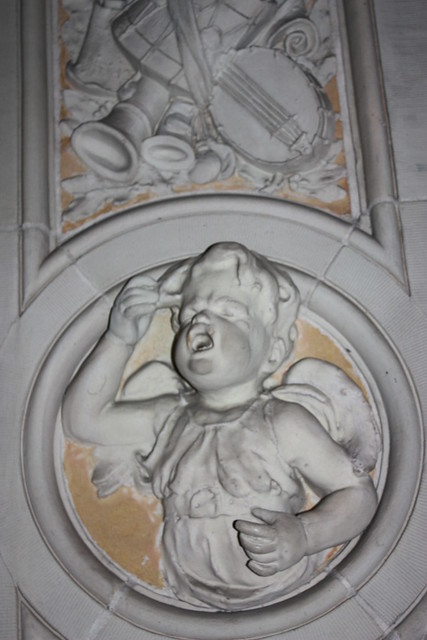 Actually, that might be a bad example. This cherub is really friggin creepy.

So the decor on the front of the BAM turned out to be all completely innocent, and easily explainable – unlike my fifth-grade school play, which still baffles me. Seriously, the script required a bunch of kids to run around repeating a racial slur while pretending to kill Native Americans.