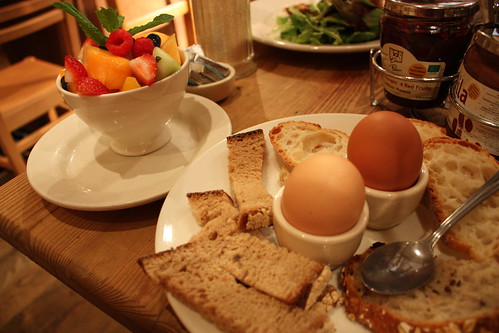 In high school, I ate fast food nearly every day.

While my colon now involuntarily spasms at the thought, I lunched at Burger King on Mondays through Fridays for the better part of my junior and senior years. And yet, miraculously, I was far thinner than I am now. It was clearly a superpower of youth, one that I am unable to explain. In the words of Madonna, life is a mystery.

I gave up fast food, almost entirely, after watching SuperSize Me. I have Morgan Spurlock to thank for saving my arteries, and for almost succeeding in bringing back the Hulk Hogan mustache. Well done, sir.

Since then, I’ve often said you should never eat at a chain or fast food restaurant, particularly while traveling. Once Rand had to physically restrain me from running into an Olive Garden in Manhattan and shouting at the diners therein, “WHAT IS THIS BLASPHEMY?” while upturning their baskets of endless breadsticks. It’s only a matter of time before I chain myself to a TGIFriday’s, and go to prison for the noblest of crimes: protecting my fellow Americans from mediocre food.

And yet – (much like the time I noted that Billy Crystal was kind of hot towards the end of When Harry Met Sally, I CANNOT BELIEVE I’M SAYING THIS) there are times when I think that eating fast food is entirely forgivable, particularly while traveling. There are a couple of caveats, of course:

During our last few trips to New York, I actually sought out two chains, voluntarily and while sober. No, they aren’t the best places to eat in New York. But they are world’s better than the mutant KFC/Taco Bell/Pizza Huts that are popping up everywhere (Seriously? You aren’t even going to dedicate a storefront to one single crappy cuisine? You have to foist three upon us at once? That’s like punching someone, eating the last brownie in the pan, and revealing the twist to The Sixth Sense all at the same time. So not cool.)

Here are the two chains at which I will forgive you for eating. They can be found in New York and London, amongst other places, and they’re branching out quickly. Pray they don’t come to Seattle, or my all my plans will be ruined.

The number of times Rand and I have landed in London, bleary-eyed and starving, is now too many to count. It was on one of those days that we first wandered into a Pret, at the recommendation of our friend Jane.

And perhaps it was the jetlag and the British Airways chicken curry talking, but we found it to be FRIGGIN AMAZING. It’s like 7-11 for foodies. They have shelves and shelves full of sandwiches, and not those god-forsaken egg-salad-with-wilted-lettuce-on-white-bread abominations that you find at an actual 7-11. NO. They have the sandwiches those sandwiches could have become if they had applied themselves more and gone to a good college. A Vietnamese baguette with grilled chicken and cilantro. Brie, basil, and tomato on crusty bread. And yes, they even have an egg salad sandwich but it would smack the eggs from that other egg sandwich BACK INTO THEIR SHELLS WITH ITS AWESOMENESS (I say this as someone who has not eaten the sandwich in question. Because I don’t like egg salad. But still, I know the one from Pret is better).

And there’s more. I once had a salad there studded with tiny little crayfish and thin slices of salmon – a particular variety which I suspect is only available in the U.K. Another had tabouli and olives and roasted red peppers, and by the time I was done with it, my undying affection, too. 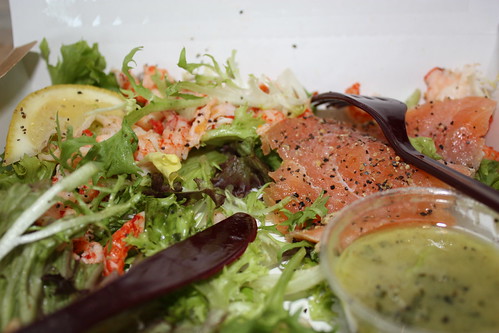 They have little bags of popcorn with sea salt, and all manner of cookies and cakes and bars, including a gingerbread man that I bought in London that was later eaten in Barcelona by this man: 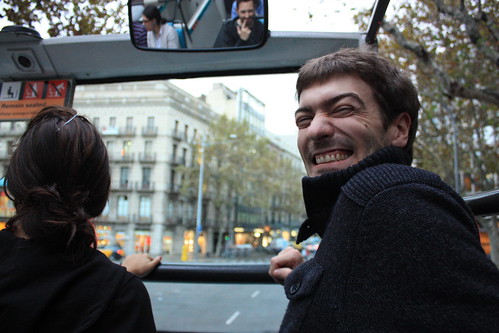 Damn it, Kenny. You owe me a little cookie man with chocolate buttons.

And, as if that wasn’t enough, the copywriting on the packaging is phenomenal. That’s right: EVEN THE NAPKINS ARE BRILLIANT. 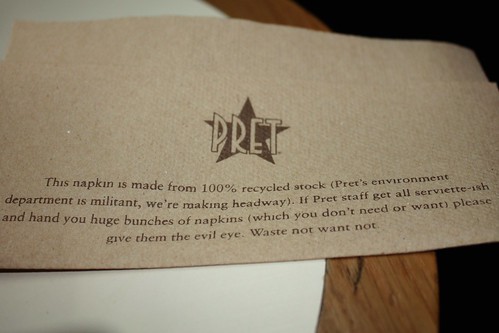 This is what happens when you let writers be awesome.

Clearly, when I’m starving and looking for a bite in New York or London, I’ve no reason to go anywhere else.

Unless, say, there’s a Le Pain Quotidien close by.

Originally started in Brussels, Le Pain has stores in Europe and beyond (currently more than 18 countries), and I’ve visited locations in London, New York, and Los Angeles. They have vegan options, too, and I can tell you firsthand that they don’t suck. This, coming from a girl who endeavors to eat bacon at every meal, is high praise. 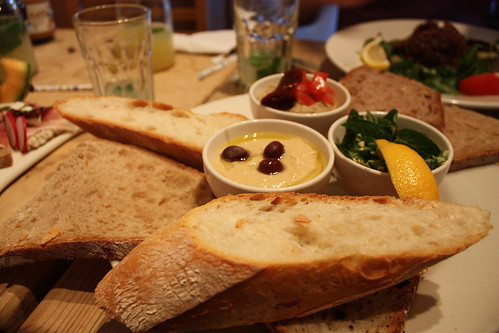 They have salads and tartines (which is a fancy word for open-face sandwiches) and a pastry selection that nearly made me pee. The food is good, if a little pricey -I once paid $20 for a salad at the Covent Garden location. It was a really good salad, but still. 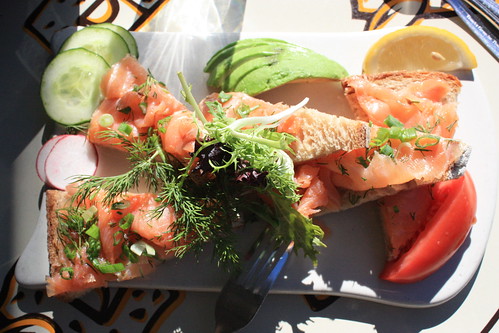 The salmon tartine at Le Pain.

But what’s really magical is this: 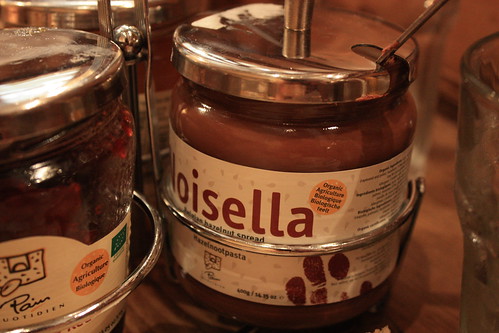 I love that the label actually includes a little chocolatey fingerprint design.

They call it Noisella, but that’s only because they don’t want to get sued. It’s basically Nutella, which is pretty damn magical on its own, but it’s ORGANIC. And they bring A WHOLE FRIGGIN JAR OF IT TO YOUR TABLE AND THEN THE MISERABLE FOOLS JUST WALK AWAY.

I mean, they just leave it there. And you can do whatever you want to it. Presumably, everyone is respectful and responsible and doesn’t reach in with their bare fingers (even though no one is watching and you totally could) because that would be wrong. So deliciously wrong. 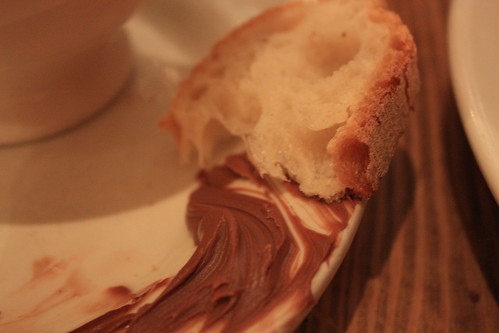 I just licked my monitor.

So instead you simply dip your spoon in as far as it will go and pluck it out, so that it is so heavily coated with chocolate awesomeness that it in no way resembles a spoon. And after a frenzy of eating during which your mate can’t actually bear to look at you, you fall into a blissful sugar coma, while still managing to threaten to cut your husband if he tries to pry the flatware from your cold, sticky hands. You will be buried with that spoon. Along with several jars of Noisella.

It’s what the pharoahs would do if they lived in modern times.

“Ramses, I swear to me, I’d better find at least three crates of that off-brand Nutella in my tomb when I die, or I will send a plague of locusts on your ass. None of that dessicated cat in jar crap, okay?” ***

***I clearly know nothing about ancient Egypt. Moving on …

The point I’m trying to make is this: Sometimes you eat an entire jar of chocolate hazelnut spread and forget what your point is.

No, wait. That’s not it. Maybe … sometimes Billy Crystal is hot? Yes. That was my point. Sometimes he is. Sometimes a stopped clock tells the right time. And sometimes chain restaurants are good.