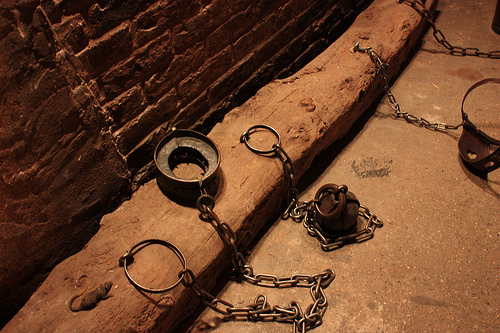 It’s official: The Clink is not now, nor has it ever been, a good place to visit.

I am easily scared.

The first time I saw The Sixth Sense, even though I knew the twist thanks to a big-mouthed teacher of mine, I nearly peed my pants. Thankfully, as far as you know, I did not.  And once, years ago, Rand and I spent the night at a hotel near the Oregon Caves that was supposedly haunted. I literally spent the night with one eye open, convinced that if I closed it, I’d wake up dead (in the early morning hours, this logic made sense).

On occasion, I find myself at odds with my chicken-sh!t disposition, and my curiosity as a traveler wins out. Like our visit to Sleepy Hollow, New York, or the Old Operating Museum in London. Yes, these places are somewhat creepy, but they’re also downright fascinating.

This is what originally drew me to the Clink Prison Museum in London. The Clink Prison was in operation from the 1100s up to the 1700s, and was known for being a rather unpleasant place. All manner of torture and suffering happened there, usually to members of whichever religious group the reigning monarch at the time was not a part of. The jailers and guards were entrepreneurial in their corruption, accepting bribes and charging prisoners exorbinant amounts for food and other necessities. Prisoners were flogged, or strapped to the rack, or boiled in oil, which I understand makes for a lousy week.

I anticipated that the Clink would be a worthwhile visit – creepy and entertaining. The reviews were solid (edit: I don’t know where I got this idea. The reviews are awful and hilarious), and it sounded legit. Even when I saw a gentleman in a terrible period costume handing out fliers in front of it (which is a pretty clear sign that you should run in the opposite direction), I was still convinced it wasn’t going to be an awful tourist trap. After all, there were street signs pointing to this place. The civic planners for the city of London wouldn’t lead me astray, would they? There should be a warning underneath that reads: “This place is so not worth your money.”

Spoiler: they totally would. Those bastards.

While plenty of genuinely horrifying things happened on this spot, the museum feels like a bad house of horrors at a county fair. In an effort to truly hammer home the atrocities that happened here, the purveyors somehow cheapen them. A few sharpened pikes are scary on their own, because of what our imaginations add to the scene. But with the addition of a couple of fake, bloodied heads, and it becomes absurd almost to the point of being funny. Part of the reason I think I didn’t love the Clink was because of my expectations – had I expected something ludicrous and funny, something that I could have ridiculed in the company of a friend, I suspect I might have gotten a kick out of it. Instead, I found the whole thing to be kitschy, and not in a good way.

The museum started out promisingly enough, with real, genuine artifacts! Scraps of shoes that had been uncovered at the site were on display. The different sizes and shapes made it clear: men, women, and children had all spent time in The Clink. But it soon descended into corniness. In the background was audio of a man yelling in agony. Problem was he sounded like Bert from Mary Poppins.

Want to know how to create your own authentic Clink Prison dummy? Take a regular dummy, add a Pilgrim costume, and smear the whole thing with blood. Done! The idea that children were imprisoned along with their parents was incredibly disturbing. Fortunately, the zombie Pilgrim helped brighten the mood.

Reproductions of implements of torture, like this metal mask, were genuinely frightening: Though I bet wearing this is more comfortable than having to sit through the 1998 film version of “The Man in The Iron Mask.”

This, however, was not: I see Curly and Moe, but I’m having trouble placing the other two. Chains and locks found at the site of the Clink Prison.

Outtake from a Barbie bondage video: It’s meant to illustrate one of the torture devices, but I’m pretty sure it’s a huge G.I. Joe. And he’s not wearing pants.

This next part of the museum was legitimately disturbing. It’s a recreation of a debtor’s cell. This scene sent one poor little girl screaming out of the room.

Notice how the bed is raised? Apparently the prison would often flood, filling with ice cold, putrid water and sewage, and the prisoners would struggle to not get soaked while they tried to sleep. Oh, and see the bowl of round, red things in front of him? Those are rats. Since he’s a debtor, and unable to procure any money to buy food, that’s what he’s going to feast on.

Now, considering all this talk of rat-eating, what, pray tell, do you think an appropriate mascot for the museum would be?

Soon, you will be eaten.

He’s actually quite sweet, what with his buck teeth and bright-eyed demeanor. Shame, really, that he’ll end up skinned and eaten by some innovative debtor. But wait … what’s that on his foot? Um … he’s attached to a ball and chain? Seriously?

The idea that the rat is a Clink prisoner tells me that the early English legal system was far more thorough than I had previously imagined. Still, it’s cute, and probably plays well with younger visitors who haven’t yet run screaming from the museum. And I bet he’s sharing lots of kid-friendly facts! Or, you know, just facts about how former monarchs were really BIG on torture.

Okay, you know what? That’s just messed up.

The Clink isn’t a particularly big museum – just a few rooms. Apparently it was once the basement of a warehouse, and it still largely feels like it – there are no windows, the lighting is dim, the air stale and hot. I guess that’s the one bit of authenticity about the Clink: when you’re there, you really do feel like you are imprisoned. When I left, my wallet ten dollars lighter than it had been, and stepped out into the bright, crisp London afternoon, I couldn’t help but breathe a little more deeply, walk a little more lightly, and enjoy the city just a little more.

My hard-earned lesson was this: Freedom has its merits, even if the Clink Prison Museum does not.