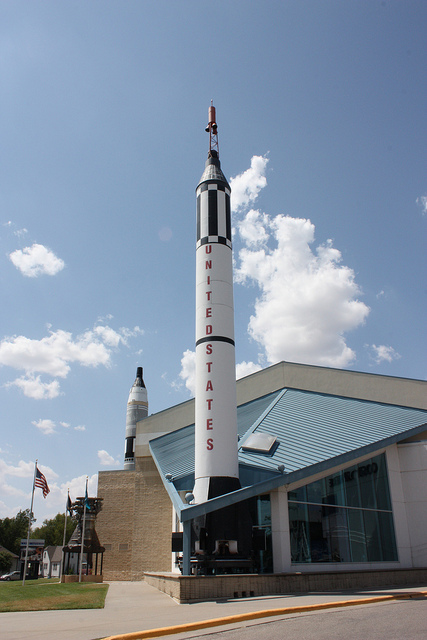 History is not always kid-friendly. It lacks happy endings, victorious protagonists and punished villains. It’s not really something we have the grounds to complain about. History wasn’t created by a bunch of underpaid writers in the basement of a Hollywood studio. We can’t threaten to boycott Disney until they get the story right. We’re the ones who contributed to the narrative. It’s our history. And sometimes, the facts are just downright dark and, for lack of a better phrase, effed up.

Actually, let’s stick with that phrase. “Effed-up” works really well. It came to mind more than once when I visited the the Kansas Cosmosphere and Space Museum in Hutchinson. I’d stare blankly at an exhibit and think, “Man. That’s effed up.” (Only, you know, I actually said the word.) To its credit, the museum does not pull any punches. Not a one. The facts are these: Hitler played a big part in getting us to the moon. In his quest to build ballistic missiles, he brought together some of the finest engineers in Europe. After the war, the work of those German engineers was used by Americans to get to the moon. A feat which we probably would not have attempted had it not been a way to best the Soviet Union, who was racing us to get there. That’s the ugly historical truth: Nazis and the Cold War helped get us to space.

The exhibits are equally jarring. Behold: One this is certain: the Cosmosphere is not subtle.

We saw this when we first walked into the museum, and found ourselves staring blankly at it.

“Um … creepy.” I managed to mutter to Jason.

“So … yeah,” was his only reply, which summed up precisely how we were feeling.

The Treaty of Versailles (which ended World War I) forbid Germany to build any offensive weapons, but omitted mention of ballistic weapons. This loophole allowed Hitler to assemble a group of engineers and scientists to develop such weaponry. Countless Jews died working in factories while building the missiles. And yet … a giant swastika? Imagine the poor general contractor who had to drag that thing into the museum in the first place. Did he stop and chat with his colleagues on the way in? What if he spotted a neighbor – would he pause to say hello?

“Hey, Fred! How are your tomato plants growing? …What, this thing? Oh, it’s just an oversized Swastika. No, it’s not mine. They just pay me to hang it on a wall for a bunch of kids to see.”

There was more, too: I couldn’t capture the entirety of this bomber, but here’s a close-up on the decal on the tail fin. Nazi flag captured during the surrender of the German town of Chemnitz, days before the official end of the war. Donated by one of the U.S. soldiers who was there.

We’d seen half of one exhibit, and we were already sufficiently shaken.

The museum followed the course of history, moving from the end of WWII to the Cold War. Apparently, after Hitler was defeated, a large number of his rocket engineers went on to work for the U.S. government – a fact which had Stalin infuriated. The Soviet leader had lost out on years of research and technology that had gone straight to the Americans. Despite this, the Russians would be the first to launch an animal into space. Laika would only live for a few hours after launch, but the New York Times nevertheless printed that the Soviet Union had bested the United States. A recreation of Laika in her capsule.

Laika’s capsule is a replica, obviously (her body and the original capsule burned up upon re-entry), as are most of the pieces in the collection as the Cosmosphere. Apparently the Smithsonian was purging many of their space-related artifacts during the 1970s, and city of Hutchinson, Kansas, in a rather brilliant move, offered to take the items off their hands. Though the location is unexpected (while plenty of planes and jets were built in Kansas, the state’s only real relationship to outer space is Clark Kent), the collection is worth seeing.

There’s an extensive exhibit that traces the history of the Space Race and the Cold War. This portion of the museum was was significantly more light-hearted than the other exhibits we’d seen up until then, in part because of the obvious biases prevalent, which made the whole thing inadvertently comical. Two huge statues, representing the dueling ideologies of Communism and Capitalism, faced off against one another. The statues were, I kid you not, of Lenin and UNCLE SAM. Forgive me, but I may have laughed at this pairing. It’s like a themed wrestling match.

Just for the record, Communism gets the head of the Bolsheviks, and Capitalism gets a fictional character who doesn’t even represent Capitalism. There were other more suitable match-ups further along in the exhibit, like Kennedy poised against Khrushchev. Considering that these two actually had an adversarial relationship, and neither was fictional, it seems slightly more appropos and slightly less WTF. The placement and staging of the statues is in no way impartial: check out Khrushchev, captured in a moment of anger and frustration as he waves his fist while suffering from a mild case of camel toe. That’s right- the statue looks like it’s been emasculated: Incidentally, he’s also standing next to a section of the Berlin wall, lest you forget that Communism failed.

And here, by contrast, is Kennedy, sitting down, looking relaxed and happy, and no doubt more capable of pleasing a woman than his Russian counterpart. Adjacent to the statues was a huge portion of the Berlin wall. In the context of the museum, this wasn’t all that shocking until I remembered: we were in Kansas. Portions of the Berlin wall are sitting in a museum in Kansas. The state had proved to be nothing but surprises. I was rather mesmerized by this sphere. A bit larger than a softball, it’s identical to one  that was launched into space by the Soviet Union in the late 1950s, designed to break apart into hundreds of little disks upon impact with the moon. Each disk is marked with the year (1959) and the name of the Soviet Union. It was supposedly a success, and when the disks were scattered across the lunar surface, the Soviets were able to claim that they had reached the moon first. Naturally, the Americans were pissed.

The Americans, though, would eventually feel vindicated. It’s roomier than most NYC apartments. It was interesting – once we reached the point in the exhibits’ timelines where man walked on the moon, the mood of the museum seemed to change. We’d done it! We had succeeded! No more thoughts of dead dogs, of concentration camps, of Nazis. Jason and I noticed this shift – it was when we started having fun and goofing off. I pretend to be jettisoned in this ejection seat. Please ignore my thighs. They are not my best feature. What’ll happen if I press this button? And rather amazingly, we did not make a single fart joke about this: I KNOW. I’m surprised, too.

There was little mention of more recent space tragedies. No real talk of Challenger or Columbia. I don’t think the museum’s curators were simply glossing over the unpleasant parts of history (clearly, they hadn’t in the exhibits pertaining to Nazis and the Cold War) – rather, I suspect it’s because the museums collection doesn’t extend too much past the mid-1970s. It ends on a happy note in NASA’s history, and given all the darkness that leads up to that point, and the eventual demise of the space program, it seems like a good place to stop.

The Essentials on The Kansas Cosmosphere and Space Center:

Verdict: Recommended. Expect to spend at least 90 minutes in this Smithsonian-affiliated museum to really appreciate all it has to offer. If you have extra time, consider an IMAX show.

Ideal for: history buffs, space nerds. I particularly enjoyed it – it gave additional historical context to my visit to the Kennedy Museum and Library in Massachusetts (Wow. I’m a dork.)

Insider tips: we went on a weekday after lunch and found we had the museum mostly to ourselves. Unfortunately, we’d already been to the Salt Museum that day, so we were too tired to appreciate everything the Cosmosphere had to offer. Make sure you have ample time and energy, and consider getting an All-Day Mission Pass if you want to see multiple attractions (the Planetarium, an IMAX show, etc.) The gift shop is also worth a visit. Where else can you find astronaut ice cream, knock-off Lego building sets, and geeky t-shirts? I mean, besides my husband’s office.

Nearby food: We headed to Bogey’s, which is also in Hutchinson. The museum also offers food service.

Good for kids: The Cosmosphere would resonate best with slightly older children (ages 10 and up) who are interested in the Space Program. Younger ones may find certain exhibits (like the WWII-era artifacts) confusing or boring.

Update 10/04/11: The CEO of the Cosmosphere was kind enough to comment on the blog and let me know that a lot of the artifacts we saw were originals, and not replicas. Sweet! Also, it looks like their collection now spans past the 1970s (getting trapped in that era only works for Disco Stu).