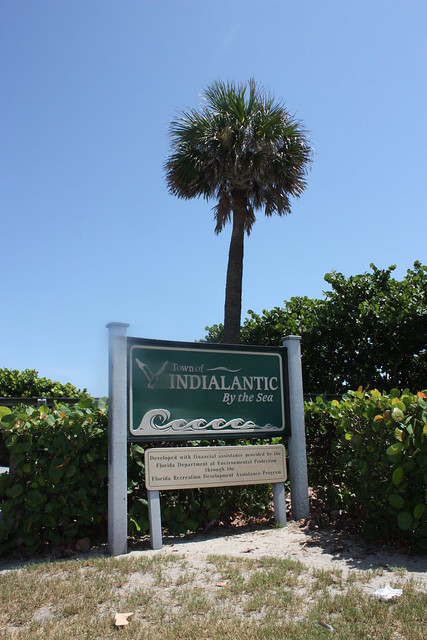 As a kid, I never understood the expression “You can’t go home again”. I thought it was idiotic. After sleepovers at friends’ houses, after long afternoons at band practice, after a week at SeaCamp (oh, don’t act so surprised: I was and still am a dork), home was always waiting for me. No matter how much time had passed, I’d reasoned that the one thing that you could always go back to was go home.

As I grew older, my understanding of this concept changed slightly. You could still go home, but you might find that someone else lives there. Or that you aren’t welcome any more. Or that your room has been turned into a storage closet and all of your personal possessions are “in the attic” or were “given to the Goodwill.”

Time passes, people change, and sometimes home is no longer that. This realization hit me a few weeks ago, when I returned to the only place besides Seattle that I’ve ever called home: Indialantic, Florida.

What’s that? … Oh, please. You have NOT heard of it. You are thinking of Indiana. Or possibly Atlantis. Both of which have a larger population of residents/mer-people than Indialatic (pop: 3,000).

Indialantic lies on a spit of land sandwiched between the Atlantic Ocean and the Indian River, and its name is as portmanteau of those two bodies of water. It is not vibrant or bustling. There’s no movie theater. I don’t know what kids nowadays do on a Saturday night (I know what we did. We rented Jeff Goldblum movies and giggled at his impossibly small waist. Kids today now ogle hairless, poreless young men who were probably genetically engineered by Disney. How sad.)

Growing up on the Space Coast, I can spot a funnel cloud in the sky, I can do the stingray shuffle, and I know that hurricanes rarely follow the paths predicted by meteorologists. None of this knowledge has ever come in handy living in the Pacific Northwest, but I’ve still managed to retain it, while forgetting all the math I ever learned in high school. So, there’s that.

I don’t have any family left in Indialantic. The few relatives I still have in Florida are in bigger cities, like Orlando or Ft. Lauderdale. But I still have friends there, in the city by the sea. That’s enough to keep me going back. It’s why I was there this past summer – to spend a few days with my friend Giselle, before we headed east to Lake Placid for a wedding reception.

I landed in Orlando, and Giselle drove to pick me up. It is not a short drive. I phoned our friend Desiree and made her meet us for dinner with ZERO notice. That’s the nice thing about old friends: you can inconvenience them whenever you are in town. It’s grand.

Here we are at dinner that night. I spent 6 hours on a plane, which is mostly what’s wrong with my face. 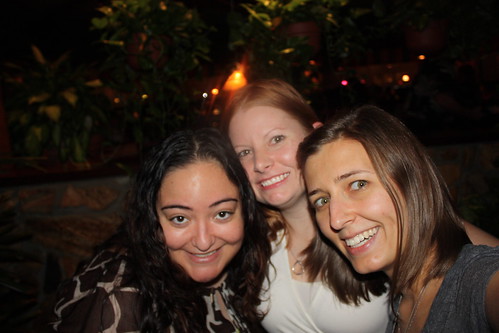 They are going to kill me for posting this.

Here’s another photo of the three of us, circa 1994. Please observe that I have never been cool.

"I must have missed the cue to ham it up." - Desiree

I suspect I will be in hot water for posting both of those images, but they have to forgive me. Old friendships are the BEST.

I crashed on Giselle’s couch for no less than 3 days, and she said nothing when I ate part of her present (I WAS HUNGRY AND IT WAS EDIBLE) and hogged her bathroom. She even made me vegan pancakes with bacon (which is the delightful way that I describe Giselle’s dietary restrictions: vegan + meat). They were delicious, by the way. 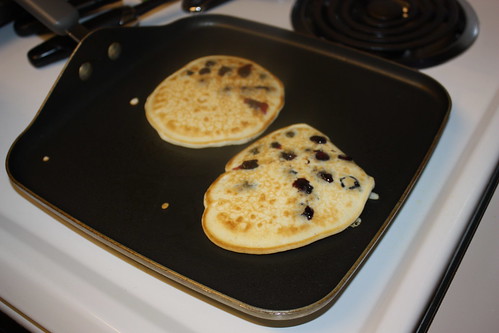 Giselle ate vegan food before it was cool.

Since we were kids, Giselle’s had a severe allergy to milk and eggs. I don’t mean any of this “intolerance” nonsense everyone has these days. No. Giselle has an actual EpiPen in case of emergencies. She never really made a big deal of it, but over the years I’ve decided to stick to her diet whenever we’re together (mostly). It makes it easier to pick food from her plate without killing her. Plus, one time in 5th grade I spilled a Wendy’s baked potato with cheese all over her leg. That was a bad night. I now laugh about it.

Me: Remember that one time I spilled cheese all over you and you instantly broke out into hives and couldn’t breathe?

Me: Wasn’t that HILARIOUS?

(Notice I said I laugh about it.)

My first morning in town, Giselle and I drove out to Flutie Field (now known as Flutie Athletic Complex), where we played softball as kids (it’s named after Doug Flutie, who lived in the area for a years while growing up in the 1970s. He was not born there. He does not live there now.) These days, the fields are much nicer than when we used them. The grass looks healthier, the bleachers less tentanus-y, and there’s an actually playground. 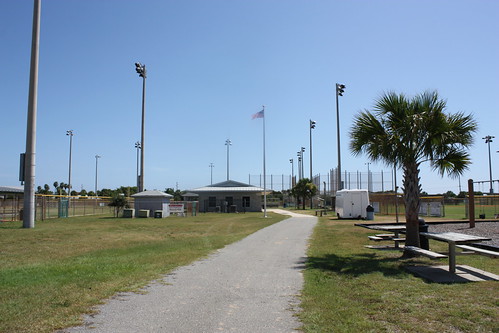 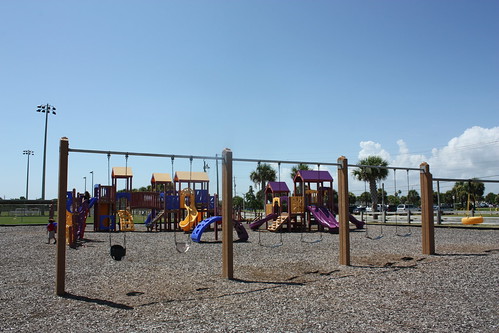 Walking around, Giselle and I enjoyed a rather lovely round of “Kids these days don’t know how lucky they have it”, after which we headed to the beach. Unlike the fields, it was remarkably unchanged. The lukewarm water, the cumulus clouds on the horizon, the searing hot sand – all the same as I remembered. 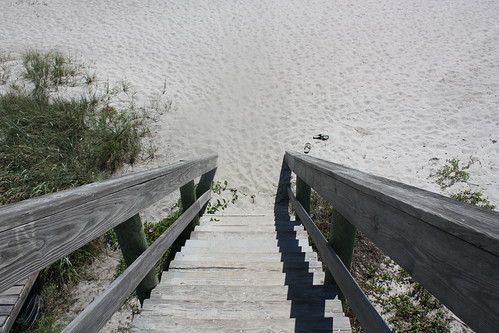 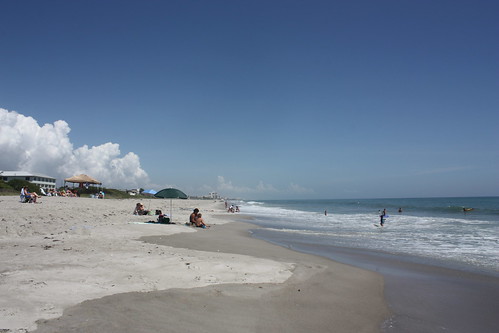 Giselle drove me around for hours. We went by places I knew and recognized, and some which had faded from my memory. We stopped by our old elementary and middle school (an experience which deserves its own post) and we drove by my old house. 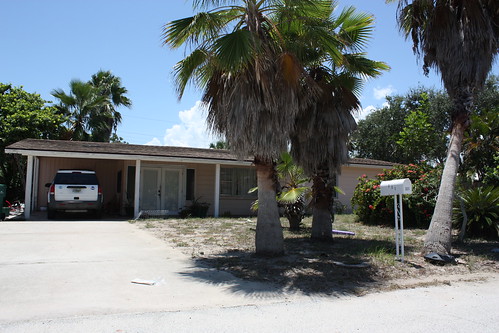 I figured I had no lingering attachment to that small rambler on that dead-end street, but I was wrong. I lived under that roof for six years – longer than any other home I’ve had before or since. I thought of all the times I ran through the front door after school, dropping my ESPRIT bookbag on the ground as I went. The hours spent in my room, talking on the phone with friends (nowadays I cringe when I get voicemail). The moonless nights when I grabbed a ladder and climbed onto the roof to the look at the stars (something so sweet and poetic, I can’t actually believe I did it. I take comfort in knowing I probably farted while I was up there.) And now? I could not even clean up the trash that the current residents had strewn upon lawn, and why the hell was there trash, anyway? WHO WERE THESE PEOPLE IN MY HOUSE?

And then I remembered the obvious: this was not my home. It was someone else’s to do what they wished. They could leave trash in the yard. They could replace the tiki mailbox my mother so adored with a crappy metal one. I couldn’t get mad at people for what they did to their own house.

A glutton for punishment, I asked Giselle to swing by my grandparents’ old place as well. It had fared much better. The yard and the house were clearly loved. But I still felt sad. I missed the life we had breathed into that home, the specific personality that we gave it when it was ours. I missed my grandparents. I missed my uncle. I missed our calico cat, that kept the yard clear of lizards and snakes. 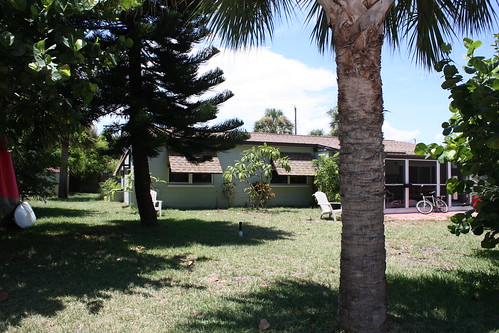 I even missed my hamster, whose mummified remains lie somewhere in that backyard (we buried her in her beloved plastic ball, which I’m sure delayed the decomposition process).

Hell, I missed everything. The now-defunct Winn Dixie grocery store, which has been turned into some sort of super-gym. The Italian bakery that made BITE-SIZED CHEESECAKES. The TCBY which, weirdly, we’d stop at after dental appointments. All these places were now gone. Was my hometown simply devoid of life? Or was it merely devoid of the glow of the childhood, which casts everything in a more vibrant light?

Adages are adages for a reason – everyone knows you can’t go home again, so why was I even trying? What the hell was I doing here, ANYWAY? 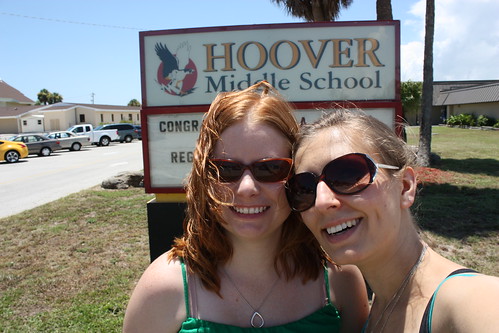 I didn’t tell Giselle any of the craziness that was going through my head. How I had been sad to leave Florida in the first place, and sad to return to find it so changed. She’d have probably said, “Oh, Deenie, come on. Everything changes after 20 years.” And she’d have been right.

That night, as I curled up on her couch, under crisp sheets and the ticking of an overhead fan, I watched Giselle wander around, covering up anything in her living room that emitted light. She draped a sweater over the glowing display of her cable box, placed a pillow over the blinking light of her laptop. It’s something Rand begrudgingly does for me whenever we travel.

“What are you doing?” I asked.

“I remember how you can’t sleep if there are any lights,” she said.

I get it: you can’t go home again. But you can go back to your friends’ houses. And if you are very, very lucky, you will find that it’s basically the same thing.