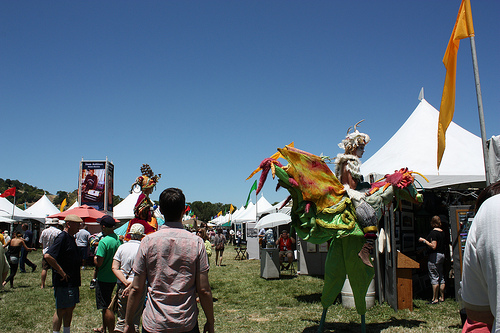 I feel sorry for people who have normal friends.

I’m sure befriending normal people has its merits. It must be nice to go out to a restaurant without having to apologize to the family next to you for what transpires at your table. And having someone dependable who can pick you up from the airport because they are not, at the age of 40, stoned out of their gourd and watching The Transporter 3 (in this PURELY HYPOTHETICAL SITUATION), would probably save you a bit in cabfare.

But, damn, it must be boring. No giggling until you are doubled-over, breathlessly gasping, “I’m going to pee!” No late night invites to drag shows starring people who were invited to your wedding. No immature, tired innuendos when one of you is eating pie. How sad.

I prefer my company to be just slightly unhinged. Not terribly so, mind you (keep your moon-landing deniers – I’ve no interest in them). But if you tell me your new hobby, is, say, painting tiny little leather-clad gimps into beautiful landscapes, or force me to spend half an hour on the floor of my home while you gently perform sacral realignment on me (which involves barely touching my scalp), or decide that even though we’ve just eaten lunch, some Chick-fil-A  sounds like a really good idea, well, we are probably going to be friends.

I call this sweet spot the Doc Brown level of crazy. As in, you probably wouldn’t trust his hotel recommendations, but you would have him babysit your kid for a few hours.

And Chris and Laura fall right into that category. We were lucky enough to hang out with them during our last visit to the Bay Area. They look so nice and normal in this photo. “You are covered in a very fine fuzz.”

And here is a photo of me grabbing them on their respective asses:
— Notice that Laura and I are the same height, yet her legs are like, 6 inches longer and her ass is not nearly as wide. Le sigh.

Huh. Actually, judging by these photos, it may seem that we are, in fact, the non-normal friends. I am in no way surprised by this revelation.

Laura and Chris met up with us in a town called Tiburon, just outside of San Francisco

“IT MEANS A WHALE’S VAGINA,” he replied. Onlookers were scandalized. It was grand. (Also, fear not: that link is totally safe for work.)

We had breakfast at a place on the water, and Chris did impressions of Tony Danza that mostly consisted of him saying, “Angelaaaaa.” Also, there was sausage.

From there we headed to the Marin Art Festival, which Laura had warned us might suck. And it did, in the most glorious way. It was staffed by a group of women who, based on their outward demeanor, had either been diagnosed with crabs, recently abandoned by their spouses, or had just been released from prison. They were awful. Since I wasn’t emotionally invested in the art festival,  and I was high on Vitamin-D from the sunshine, I found it delightful.

We used coupons to get admission for half-price (courtesy of someone in line behind us). When I handed it over to the woman working the ticket booth, she looked at me like I had given her a small turd. We had the following exchange (more or less):

Woman: (holding up the piece of paper and the money I handed to her in between her thumb and forefinger like it was a dead rat) What is this?

Me: It is a coupon for reduced admission to your fine festival. And a ten dollar bill, which I was under the impression could be exchanged for goods and services.

Woman: I hope you choke on a funnel cake.

Me: OOooh, you have funnel cake?

Yeah. It was something like that. EXCEPT THEY DIDN’T HAVE FUNNEL CAKE. I will be addressing that later in a complaint letter, I’m sure.

The art festival was in the middle of a scorched field, next to a large building that’s probably what people in the 60s thought the future would look like. Moon cars and Tang for everyone!

It was miserably hot. Our delicate Seattle blood was not accustomed to it. I assumed that it was Laura and Chris’ revenge for having to attend our wedding (in a floor-length dress and suit, respectively) in 105 degree weather a few years back. Rand finally caved and took off his shoes and socks, which meant I got to ridicule him for the elastic line on his calves. This is what he thought of that: Keep it up, Fishkin. With an attitude like that, you have a great future ahead of you working at the Marin Art Festival.

In case you can’t quite make it out, that is my dear sweet husband FLIPPING ME OFF. Lest you think he isn’t mortal.

Laura showed some solidarity by doing the same thing. Taking off her shoes, I mean. She didn’t flip me off. As we wandered around the festival, it became aware to us that the art wasn’t terribly … good. I mean, it wasn’t poorly executed, and it would have looked great in a hotel in South Florida, but I wasn’t particularly bowled over by anything. It was a bunch of oil paintings of pretty sunsets and statues of Native Americans, all made by retired white women. Rand was the one who was able to pinpoint what was wrong.

“There’s too much sunshine down here,” he said. “The artists are too happy and content. Good art comes from suffering.”

Sometimes that boy can be brilliant. If the artists in Central California want to up their game, I strongly suggest they consider spending some time in our damp little neck of the woods.

The live entertainment – the art of humanity, if you will – was far better than anything for sale that day. There were stilt-walkers, hobbling around the uneven terrain in ridiculously warm get-ups. Laura got a kick out of it, as it reminded her of her days in the circus. Yes, you read that right – SHE USED TO BE IN THE CIRCUS. I told you: my friends are awesome. And if that wasn’t enough, there was a couple wearing matching shirts. It was glorious. Forgive me, but as much as this is a crime against fashion, it is absurdly sweet. There’s no mistaking who your other half is. There’s no flirting with the waitress or surreptitiously handing your phone number to someone at the bar when A WOMAN ACROSS THE ROOM IS YOUR SARTORIAL TWIN. I have no doubts Chris and Laura will be the sort of couple that wears matching track suits. They already kind of do it now. Last time we went to visit them, they were inadvertently wearing the same thing. It was delightful.

And speaking of matching outfits … The most magical thing we beheld was the trio of belly dancers. I know, I know. It seems like I’m being facetious, which is fair, as that is my natural habitat. But truly, I was impressed. As a girl who hasn’t been seen in a bikini since sometime around 2001, I am instantly awed by anyone who is willing to put themselves (and their stomach) out there for the world to see. Especially if they aren’t rocking six-pack abs (and really, who among us is? I mean, besides Laura.) That takes major chutzpah. These gals are alright in my book. I wonder if they’re looking for a fourth. I suck at dancing of any form, but I’m really passionate about the craft.
–

Rand is noticeably less enthused about my future career path.

By this point, you may feel lightheaded by all the awesomeness I have thrown your way. You may need to sit down, take a few deep breaths, and re-group. That’s fine. I’ll wait. Because the glory of the Marin Art Festival is not yet over. For I have yet to tell you about the food court.

Those of you who have been following my blog for a while (I don’t know what is wrong with you, but thank you. Thank you a million times over.) may recall that Rand and I visited a food stand in which the young people working behind the counter were faking accents, and badly. This, too, was part of the Marin Arts Festival food court. As was a place called, I kid you not, Sausage Paradise. Where good meat-eaters go when they die.

Better still, this was the guy manning the grill: Sadly, this was the best photo of I could get of him. He barely looked up, so dedicated was he to his craft.

He looked like Jerry Garcia, and he no doubt had a prevailing aroma of sausage about his person. I might have said I wanted to run off with him, in a bout of honesty that comes from having spent too many hours in the sun. What? Don’t you bastards judge me.

Actually, it started to seem like maybe ALL of us had been in the sun a little too long. I have no idea what was going on here. This is not an appropriate way to get hydrated.

So, after one more brief encounter with yet another horrific woman at the ticket counter (they had asked us to return some raffle tokens if we didn’t use them. We did, and the woman screamed, “What do you expect me to do with that?!” I had several suggestions, but kept them to myself) we decided to head home. And while it may be the aftermath of spending 2 hours in 100+ degree weather talking, I hope we get back to the Marin Art Festival. I hope the staff remains as cranky and irritable as ever. I hope the art continues to be mediocre.

I hope our friends continue to be un-normal. Life is better when it’s odd.

The Essentials on The Marin Art Festival:

Verdict: Recommended (but that might be the sunstroke talking), though I don’t think I’d make the trip just for that

How to get there: It was about a half-hour drive from San Francisco. Rental car/personal transportation required.

Insider tips: Look online for coupons on discounted admission rates; the sun is incredibly hot, so consider bringing sunscreen or matching hats for you and your spouse.

Nearby food: Two words – SAUSAGE PARADISE. (I can’t vouch for it personally. It wins on name alone. I sincerely hope they are there next year.)

Good for kids: Sure! Children are impervious to heat and can’t appreciate art, anyway.