A totally random note from Geraldine: This is the 500th post to appear on my blog. Holy cats. There are few things I’ve done 500 times, folks. I won’t exactly go into WHAT, but there are few things – let’s just leave it at that. Thank you to everyone who helped me get to this milestone – whether through guest posts, comments, words of encouragement, or just by occasionally reading the nonsense that I post day in and day out … You are all wonderful, and I want to hug you each 500 times. Though that would probably get weird after the third hug or so.

My last post was intended to be about a pleasant day at the beach, and instead it devolved into gratuitous photos of me and my husband making out.

Sorry about that. I promise, there will be absolutely NO NONSENSE LIKE THAT TODAY. All my pictures will be chaste and sexless, and there definitely won’t be adorable self-portraits of me and my husband. 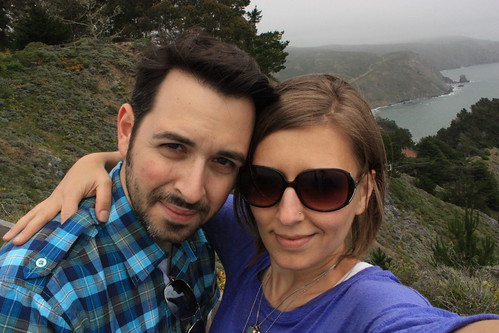 GAH! What is wrong with me? Sorry. Seriously, that will be the last bit of ooey-gooey sweetness for the day. It’s getting to the point that my own marriage might cause me to become diabetic.

Besides, spending long days traveling the world and having nothing to tell your readers except, “Rand’s hair looked particularly fantastic today. Also, his eyes looked greener than usual,” is just plain irresponsible. Yesterday, I got so sidelined thinking about my husband’s sideburns, that I didn’t even finish telling you the best part about Muir Beach, which is the overlook (there’s a joke here. Something about how I overlooked the overlook. I’m operating on 5 hours of sleep, so it’s not gelling together. Sorry). From there you have fantastic views of the water. 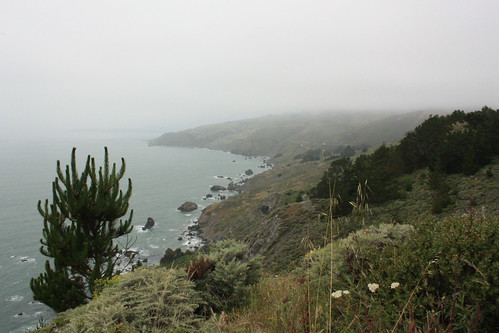 Like all good things that one encounters while traveling, we found it rather by accident. We were heading away from Muir Beach, on an equally winding but decidedly less traffic-burdened road, when we saw a rather unassuming sign. 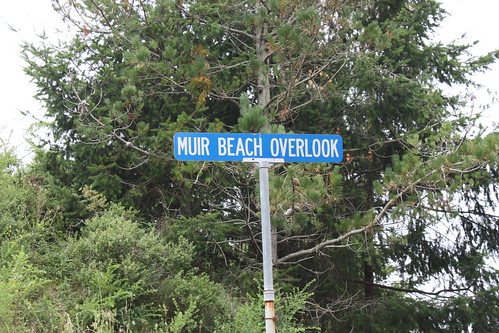 If I could give this sign an eBay rating, it would be this: "A++++ Item was exactly as advertised." BECAUSE IT WAS.

“WE ARE GOING THERE,” I screamed, and because I was driving, we did precisely that. (This may be why Rand elects to drive on most of our trips. I pull over whenever I smell baked goods or a spot a thrift store. If it was up to me, we’d never get anywhere.)

Decades ago, the overlook high above Muir Beach was of critical importance. There are several dugouts in the cliff called “base-end fire-control stations” (though the affectionate nickname for them soon became “gopher holes”). They were placed on the hill early during WWII, after the bombing of Pearl Harbor, when there was a fear that the next strike on the U.S. would either be in Los Angeles or San Francisco.  The gopher holes housed soldiers who were watching the water for enemy ships, with the aid of a giant scope. If they saw anything, they could relay the coordinates to a command center so nearby batteries could take aim at the targets. 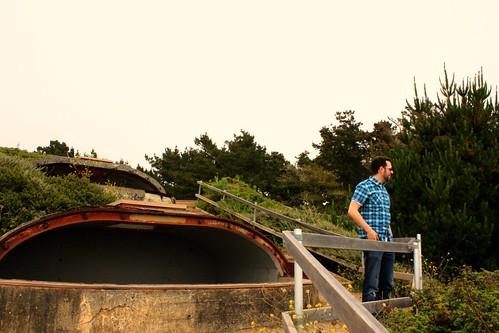 Rand and the gopher hole. Again, there is a joke here, and again, I'm too tired to make it work.

Obviously, no attacks ever took place on the west coast, and no ships were spotted.

Instead, dutiful soldiers spent long, chilly shifts in the gopher holes, two at a time, presumably alternating between being bored and freezing (or perhaps both, if they were feeling particularly ambitious). The military abandoned the stations after the war, and, judging by the refuse one can now find in the gopher holes, they’re currently used by the public as an out-of-the-way spot to drink beer, urinate, and get amorous, possibly in that order. 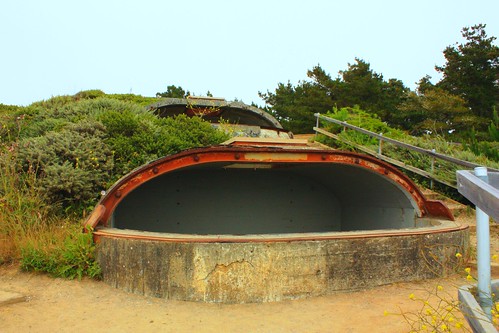 It occurred to me that I edited this photo to the point where it looks totally artificial. Forgive me. (Five hours of sleep, remember?)

I found the explanatory sign nearby to be endlessly entertaining: 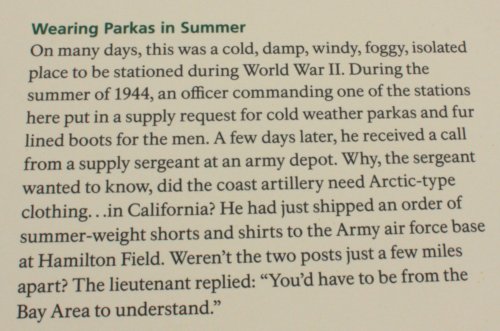 Note: "Parkas in Summer" would be a great band name for a group out of San Francisco.

There isn’t terribly much to do at the overlook except to, well, look over things. 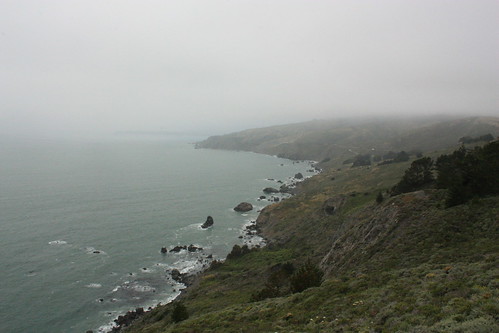 And because I said I would refrain from the sort of treacly-sweet sentimental nonsense that’s been clogging my blog as of late, here are a few things Rand and I did not do at the overlook.

We did not chase each other down this boardwalk like crazed children on a sugar high. 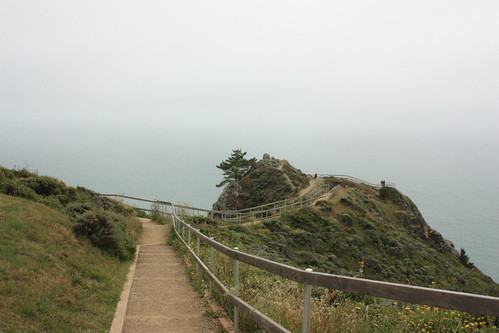 I was not charmed by the mere sight of my husband as he walked down the stairs. 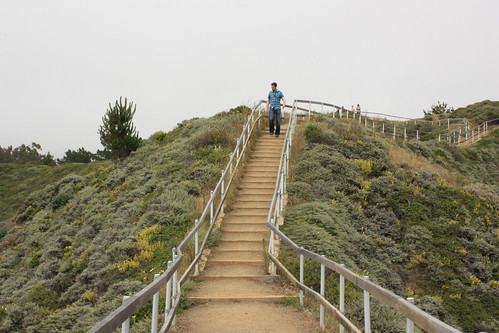 And we absolutely positively did NOT make out here … 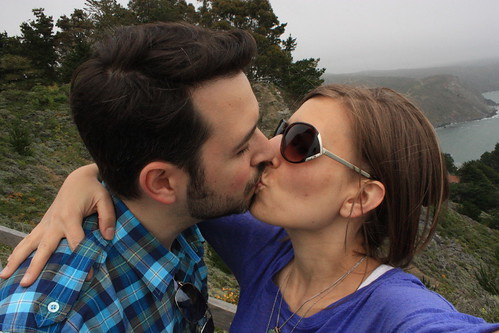 Move along, folks. Nothing to see ... 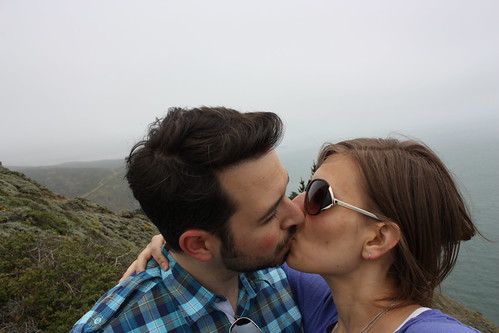 Don't trust your eyes! THERE IS NO SPOON.

NONE OF THAT HAPPENED.

And while we’re at it, when we left Muir Beach, and found ourselves at Joe’s Taco Lounge, which is a thoroughly decent spot not far away … 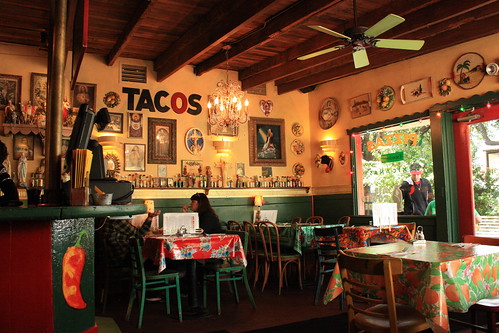 and had some lovely tacos, and then stepped out into the sunshine afterwards … 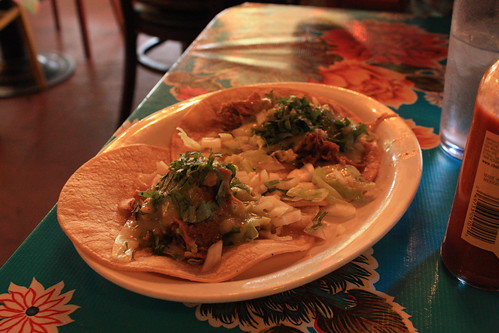 I absolutely did not think, damn it, he’s a handsome fellow … 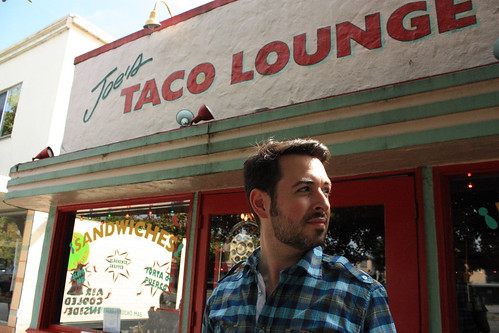 … even when he has tortilla crumbs stuck in his beard. Though, really, could you blame me if I had?

The Essentials on Muir Beach Overlook:

Verdict: Yes, particularly if you are in the area. If you don’t visit San Francisco often, skip this trip and just enjoy the views from the Golden Gate Bridge or Twin Peaks.

How to get there: You will need a rental car. The overlook can be found just north of Muir Beach, on Highway 1.

Ideal for: Photographers, WWII history buffs, folks who carry around binoculars at all times (like that one neighbor I used to have!)

Insider tips: Wear comfortable shoes. You’ll need to walk a little bit to enjoy the best views, and while the paths are well-cared for, they require a lot of stairs. It gets windy – bring a sweater or a blanket if you intend to hang out for a while.

Nearby food: There’s nothing up at the overlook, so you’ll want to bring snacks with you if you plan on staying for a long time. Joe’s Taco Lounge is nearby in Mill Valley, and is open daily for lunch and dinner. It’s not stellar, but after a day of  chastely touring the area, it hits the spot.

Good for Kids: The paths are not stroller-friendly, and there are some scary drops near the overlook, so make sure you have ankle-biters strapped down (do they still make those baby-leash things?). Older kids who are able to appreciate the historical significance of the place will probably get a kick out of it.