I have something very important to tell you with regards to travel. It has absolutely nothing to do with what you should pack or where you should go. I have no insightful revelations about which airline seat to pick in order to avoid sitting next to a guy who obviously has TB. I always end up in that seat. Perhaps that’s an area where you might be able to advise me.

No, the bit of advice that I have to offer is far less complicated than all of that. It’s simply this: that in the end, it does not matter where you go. You can climb Kilimanjaro. You can stay in a yurt and do whatever it is people do when they’re inside one of those things. You can take lots of photos, perhaps expertly, or, if you are like me, as though you have handed your camera to a drunken baboon. Do whatever you like, because really, it won’t make a lick of difference. In the end, the thing that matters is not where you go, but who is with you.

There are no two people who have taught me this lesson more than Jon and Lisa. 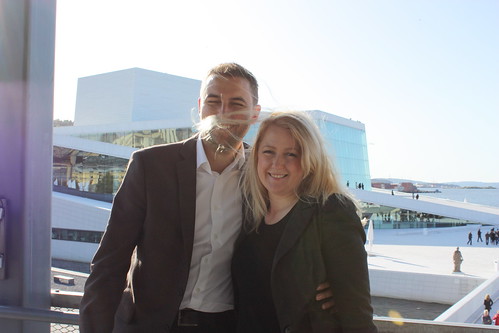 We were in Oslo, on a sunny day in October, and couldn't figure out how to get off a roof.

Whenever we meet up with the two of them, which is most often in the U.K., but occasionally in countries with slightly worse climates, things go awry. And yet I’ve never really noticed that our trips together are stunning examples of mediocrity, because, damn it, we have so much fun.

Take, for example, the time we went to Brighton, and it took us two full hours to get there, when it should have been roughly 45 minutes. How, after sitting in traffic and quietly starving, we found the restaurant we wanted to go was closed, and that it was absurdly freezing because we didn’t realize that GOD DECIDED TO INCLUDE BEACHES IN THE U.K. AS A JOKE. He never actually meant for us to visit them.

But it didn’t matter a lick, because we had a good time. The sort of good time that doesn’t stop simply because your ice cream scoop falls off its cone.

Or when I tried to take Lisa to Magnolia Bakery, but got miserably, hopelessly lost, ensuring that Lisa was late for an important call, and as we finally managed to get a cab and zipped uptown to our hotel, we noticed that Magnolia now had an outpost exactly THREE BLOCKS FROM OUR HOTEL (and this, dear friends, is why I pay so much attention to cupcakes. To avoid tragedies like this). Lisa, in her infinite patience, just sort of laughed about it, and whenever I pass by that damn bakery in any one of its locations, I smile a little and think of her.

Or, oh sweet lord, that hotel in Oslo that inexplicably had platforms all over the place, ensuring that both Lisa and I independently nearly broke our necks falling from them, while our husbands (dear souls that they are) kindly told us to be careful seconds after our ankles twisted unnaturally. And how we still laugh about it because a bathtub smack dab in the middle of a hotel room simply makes ZERO sense, even if you are a svelte Norwegian whose abs should always be on display.

All of this is why I’ve hesitated to tell you about our trip to The Black Swan Restaurant in Ockham and Richmond Park (in Greater London), because honestly and truly, I don’t know if either place is that great. I mean, we had a terrific time, but we had the company of Jon and Lisa. You may go and find it’s totally miserable.

I will tell you, in hopes of staving off some disappointment, that The Black Swan is not a thematic restaurant based on the movie, and there aren’t women running around in blood-stained tutus, as much as I wish to the contrary. The cuisine is a delicious (if a bit fancy-pants) version of tradition English fare, though it will sadly take you several long years to get it (we waited for over an hour). Of course, the time goes by quickly if you do the following: 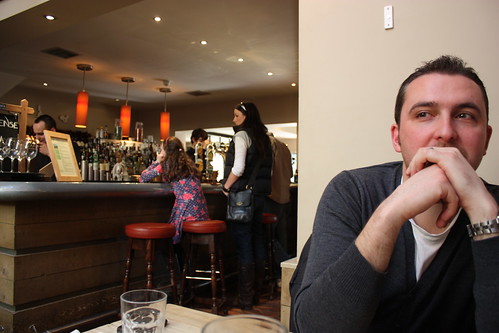 There she is in her floral dress and headband, patiently awaiting a Guinness with a straw in it.

Really, the time zipped by. When our meal finally arrived, it turned out to be quite delightful. Rand ordered some sort of liver dish topped in a pound of bacon. 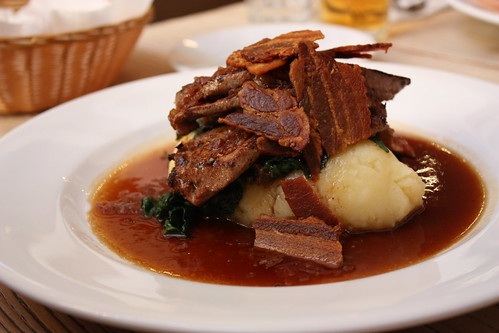 I got some sort of potted fish thing that sounds ill-advised but was lovely: 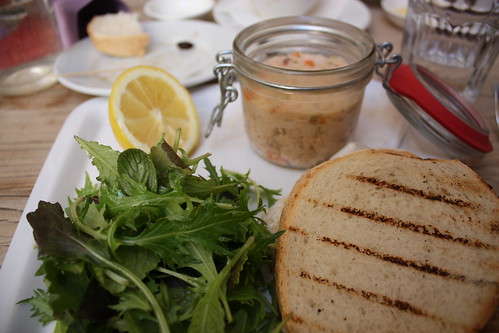 And I am pleased to report that there was, in fact, a glorious sticky toffee pudding. 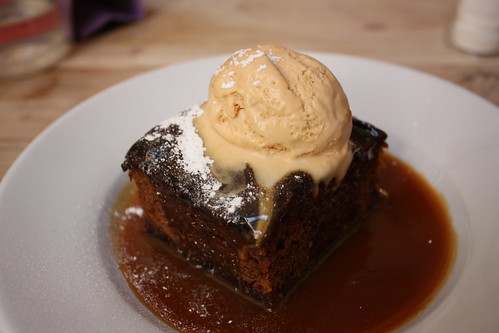 Deny me this and I will cut you.

We had a nice lunch, despite leaving several years older than we were when we arrived. From there we went to Richmond Park, which is a grand sprawling place where you imagine people distantly related to the monarchy (those who do not to merit their own pages in US Magazine, but are still a wee bit inbred) go hunting or something to that effect. 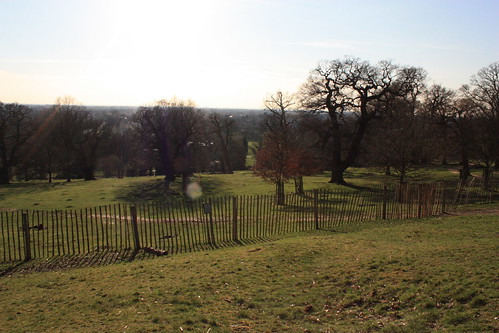 The weather was unexpectedly good, considering the forecast for London in March usually calls for grey skies with a smattering of ennui. 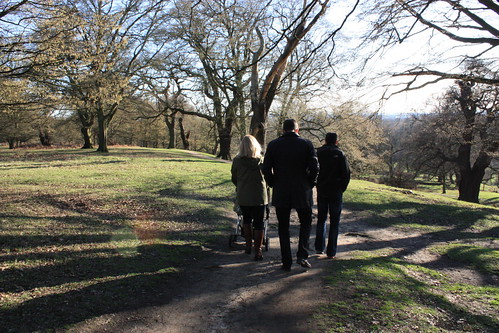 And there was this scene, which warmed the brittle lump of coal that is my heart: 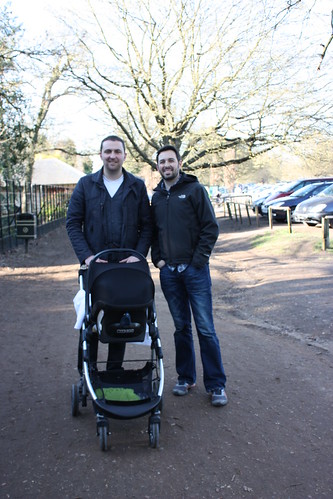 "FINE. You can both be mom. Now quit fighting about it."

Later, we headed to Pembroke Lodge in the park, which includes the following delightful line on its website:

Pembroke Lodge is a big stately affair, and I am sure that back in its heyday it was full of women who said, “Well, I never!” before abruptly fainting. Because I am a charlatan, I only took a picture of the backside. 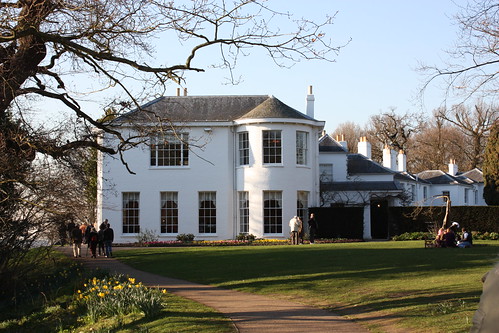 They have a cafe where we enjoyed cream tea outside, under a cluster of pigeons with loose bowels. 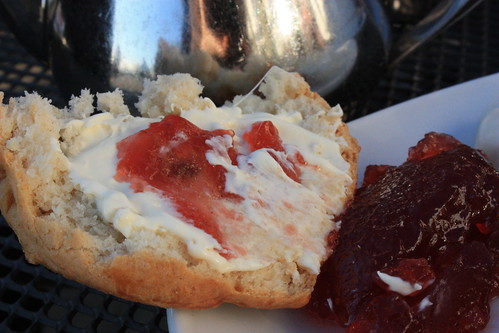 I should not have mentioned bird poop immediately prior to posting this photo.

And then we said good-bye. 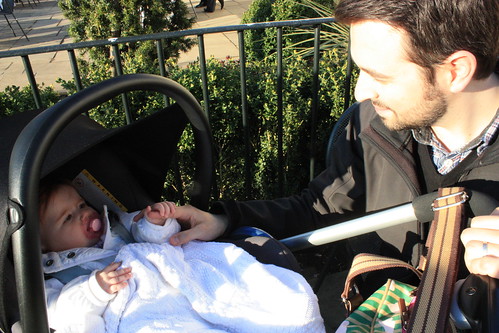 Would I recommend straying out of London to visit The Black Swan or Richmond Park? Probably not. They’re nice and all, but nothing truly spectacular. I had a lovely time, but like I said: it’s not where you go. It’s who you drag with you that matters.