Let’s talk about being healthy.

(Cue sound of people getting up from their computers and stampeding towards the nearly door.)

Well, goodness. I’ll admit, I wasn’t expecting a hugely positive reaction, but the gazelle-like sprint for the door was a little shocking. Anywho, yes, it’s kind of a mundane and boring topic, but I feel like it’s one that needs to be mentioned – being healthy while on the road is tough. If you travel only occasionally, and your vacation also happens to be your vacation from watching your diet, then it’s no problem. You can gorge yourself on margaritas and cupcakes and margarita cupcakes. And life will be good.

But for those of us who travel for more than a few weeks out of the year (I know, I know – rough life), eating with abandon isn’t really an option. It will catch up with you. As as you find yourself at home for a brief break between trips, you might have an exchange with your spouse that you’d never thought you’d have. Something along the lines of …

“God, I am so happy that we’re eating at home tonight.”

“Sweetie, what would you say if we went vegetarian for a while?”

“OMG – I was thinking the exact same thing!”

Yes, that exchange happened. And in my home. And no, those lines were not uttered by people who I promptly kicked out of my house. They came out of my mouth and that of my husband.

I know. No one is more surprised than me. But after lots of travel, and lots of eating in restaurants, Rand and I both felt like we needed a bit of a detox. Still, I know him. I know that he can live without bacon, and without shellfish, but not without both (Sigh. Gotta love those non-practicing Jewish men – all the neurosis and Semitic good looks, none of the food restraints). So we compromised and agreed – we’re going to be pescatarian until our next trip to Europe (which isn’t that far off, but suddenly seems like an eternity away). I’m actually feeling excited about the decision, though that might simply be meat withdrawal talking (note to self: “Meat Withdrawal” would be a great band name).

Of course, the struggle to not eat ourselves into elastic pants continues. And now that Italy is on the horizon, and cannoli lurk around every corner, I’ve put together a list of ways in which I try to eat healthfully while on the road. Some of you will see this as blasphemy – your dessert-devouring Everywhereist turned against you. But I promise, this isn’t the case. The way I figure it, the healthier you eat overall, the less you have to skip cupcakes.

Ugh. Did I really just do a top ten list of ways to eat better while on vacation? Yeah, yeah, I did. But in my defense, it’s for a good reason. Whenever I don’t clean my plate, or order a drink, and people ask me if I’m on a diet, I simply smile and tell them no, I’m not. I’m just saving room for cake. 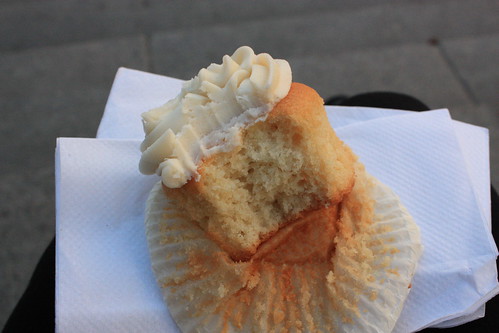