I feel like, in my honest account of Sofia, I’ve been a bit hard on the town. This was not my intention. But whenever a tourist walks through a city, the town is laid bare: all of the good and bad it has to offer can be seen. The locals simply shrug off the negative (We Seattlites don’t even carry umbrellas anymore, so impervious are we of the rain.), but the tourists? The tourists are harsh critics.

And so, before I cause any more hurt feelings or misunderstandings, I will admit to two things before I get to the heart of this post.

It helped that I was able to meet up with Rand and some locals for lunch – including one fellow in particular who was incredibly helpful. He needed to catch a bus downtown, so he walked me through the important parts of Sofia, putting things in context for me and telling me where to go. He also let me know that while there were a few places that he wouldn’t advise me to visit alone at night, during the day, within the downtown core, I’d pretty much be fine (the same can be said of most towns I visit.)

He was my savior that day, and gave direction to my wanderings. And, jerk that I am, I can’t remember his name.

So let’s just call him the Batman.

My first stop was The Church of St. George, to which the Batman kindly walked me. It’s believed to be the oldest building in Sofia, dating back to the 4th century CE. It’s smack-dab in the middle of a courtyard, surrounded by other buildings (including the Sheraton, which I was told was not as nice as the hotel in which we stayed, but very tourist-friendly). Seeing the ancient building amidst all the newer ones is a bit confusing. It’s the architectural equivalent of seeing Phyllis Diller at a Justin Bieber concert – thoroughly entertaining, and you’ll be glad you saw it, but still … weirdly out-of-place. 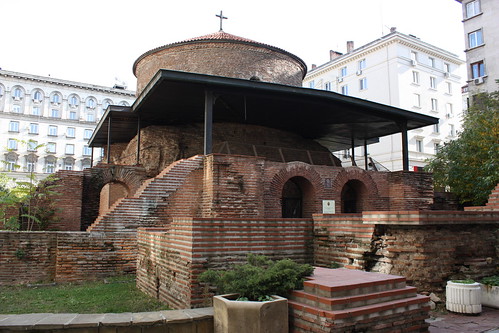 Though you were allowed to enter, there were no photos allowed of the interior of the building. It managed to remain quiet and serene, despite being in the middle of the city. 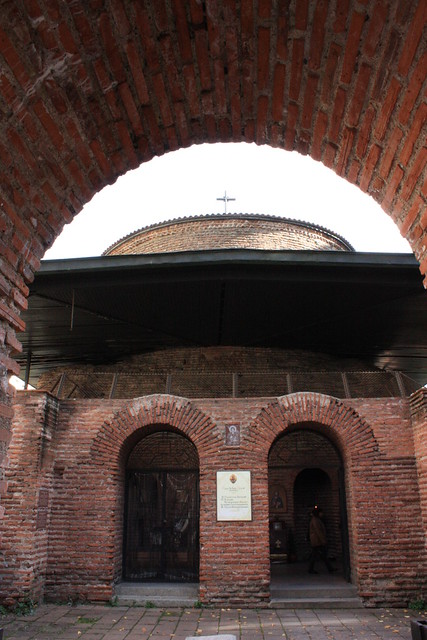 From there  I went to the church of a dozen names: The Hagia Nedelja (or Nedelya), a.k.a.,  The Saint Nedelya (Sveta Nedelya in Bulgaria). It, too, was a recommendation of the Batman’s. 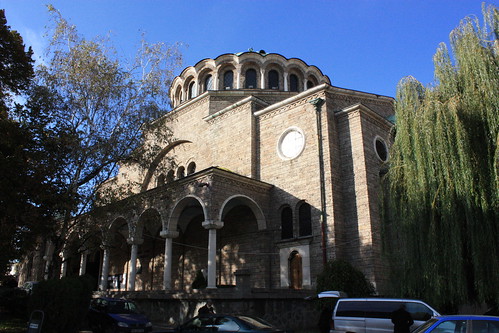 Photos were allowed inside for a nominal fee. It was reasonable, (about $3 U.S.), so I paid it and snapped away. 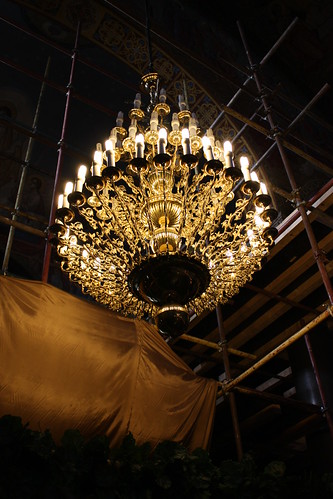 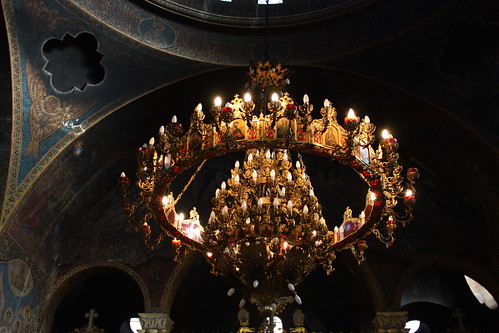 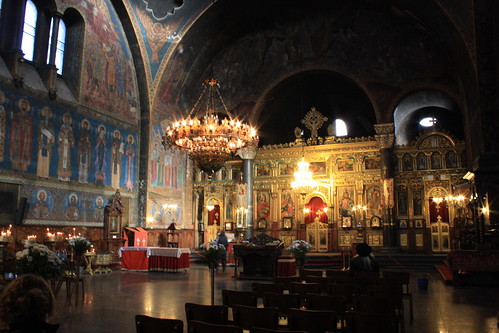 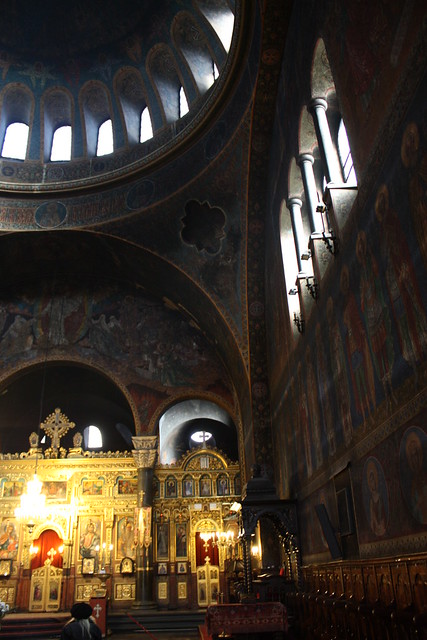 The back of the church was being renovated, so there was scaffolding up everywhere, which I had to admit, I kind of liked. 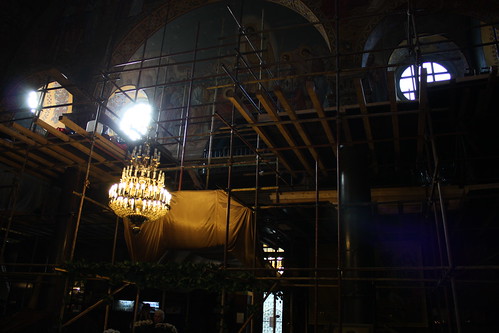 It somehow made things seem Indiana-Jonesy.

The Batman had explained the church was most notable for its historical significance – in 1925 it was bombed by the Bulgarian Communist Party, and 150 people were killed. It set off a chain of events in Bulgaria – including the declaration of martial law, and the death of hundreds of more individuals (some who were tried and sentenced for the events that had transpired, and some who were not). All in all, a sad chapter in Bulgaria’s history – and the gravity of it seems to have seeped into the church’s walls. It’s a beautiful place, but not a joyous one.

Not far from the church, a large portion of the city streets had been blocked off. Originally, it was in order to expand Sofia’s underground railway. But escavations soon revealed a wealth of underground artifacts, and ruins of Serdica, the Roman-Empire-era city that existed on the spot where Sofia now lies. While problematic for the building of the underground, it’s an archeological dream. Plans are now in the works to build an extensive museum for all the relics that currently being unearth, underneath which the railway system will pass.

It’s a few years out, though, so I had to content myself with the already-uncovered artifacts that dotted the underpasses. 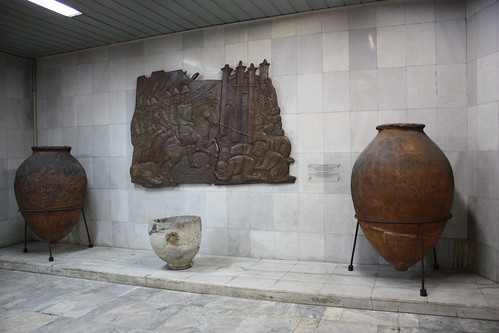 No one else seemed to bat an eye at the stuff. It reminded me a bit of Italy – when everything around you is ancient, it ceases to be a novelty. Kids shrug off things that are a few thousand years old. I read that building new structures in Rome is a nightmare, because every time you try and dig, you end up uncovering something ancient that needs to be carefully escavated. 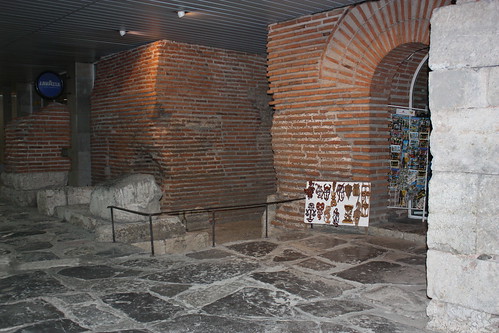 Notice the giftshop nestled within the ancient architecture.

Needless to say, we do not have this problem in the states. There’s not much of a risk of uncovering anything ancient. If something is more than a few decades old, we slap a plaque on it and declare that it be preserved, lest we forget what architecture of the late 1970s looked like. (On a personal note, this still stings).

This, thankfully, was not the case in Sofia. I freely walked through a lot of the churches, making donations, but never paying an entrance fee. When I finally reached the Bulgarian Academy of Science Archeological Museum, I was thoroughly spoiled, and consequently shocked that they charged a whopping $5 admission.

I mean, FIVE WHOLE DOLLARS? For that kind of money, you could buy a really fancy chocolate bar.

So, at this point, it would be lovely if I could tell you how I was responsible, paid the entrance fee, and had an incredibly culturally enriching afternoon. Because $5 isn’t very much money at all. Right? Sigh.

But instead, I went here: 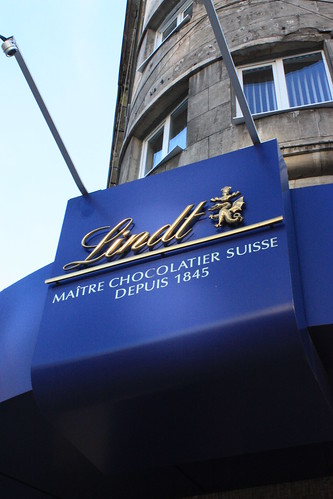 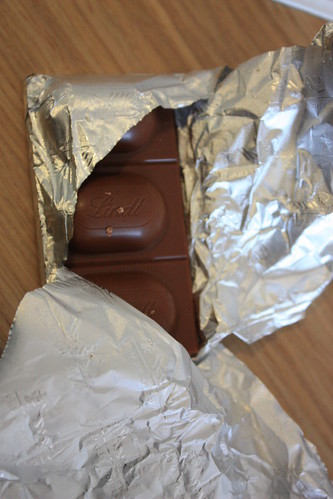 All this time I've been drinking my booze, like a peasant.

Drunk, and on a sugar high, I wandered back to the conference at the NDK, where Rand was wrapping up. 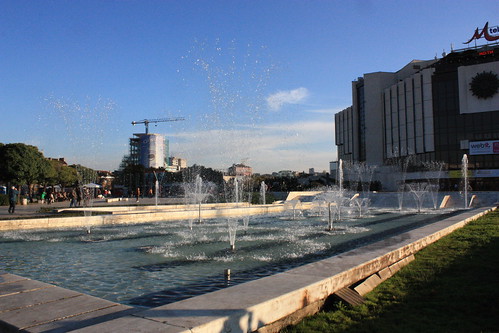 He inquired about my day. And I told him about all the culturally enriching things I saw – the ancient churches and artifacts, the city streets I wandered down, the expansive governmental buildings I walked past. And in my brain I was eloquent and rational. But, in the interest of being honest, let’s be fair: I was drunk on boozy chocolate. So it may have come out something like this:

“ZOMG OLD BUILDINGS, REALLY OLD CHURCH, gosh you are SO cute, THIS CHOCOLATE IS AWESOME. I owe it all to the Batman.”

In other words? It’s like I told you: I had a nice time.