The rich are different from you and I.

They have more art. (They also have smaller dogs, but this is a post about art).

When Rand’s grandparents made us an appointment to visit the Barnes Museum outside of Philadelphia  few months back, I had a vision in my head of walking into a crazy person’s home and finding priceless works of art mixed in within old newspapers and piles of laundry. After all, by the standards of the day, Albert Barnes was a nutter (though now he’d just be considered slightly colorful). He grew up in a working class family in Philly, earned a medical degree, amassed a fortune selling compounds and antiseptics, and spent a large amount of said fortune buying up paintings from then-up-and-coming artists like Matisse, Renoir, Cezanne, and Picasso (many of whom he called friends).

He had grand ideas about art – some of them reasonable (that educating the impoverished and the uncultured about art would help to improve their lives) and some of them outlandish (he insisted that the works he purchased be on display in an old, damp house (adjacent to his own home), stipulating in his will that they could never be moved). His oddness and curious behavior are the stuff of legend among art aficionados. I expected the museum to reflect this weirdness, finding it somewhat akin to stepping into The Addams Family mansion. In this respect, I was slightly disappointed. While the Barnes Museum is unlike any other I’ve been to, cluttered and haphazard by comparison, it is still a far cry from an episode of Hoarders.

I mean, from the outside it’s downright majestic … And then there’s the interior, of which you may absolutely not take photos: 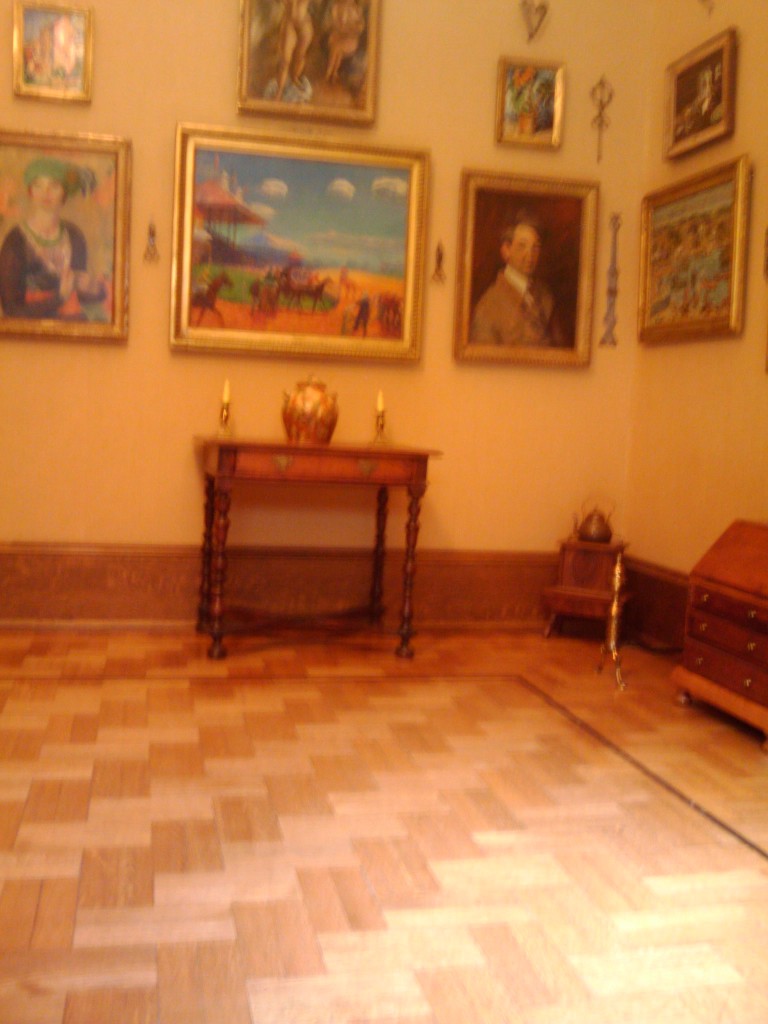 These photos suck. They were taken surreptitiously with my cell phone when the guard wasn't looking. 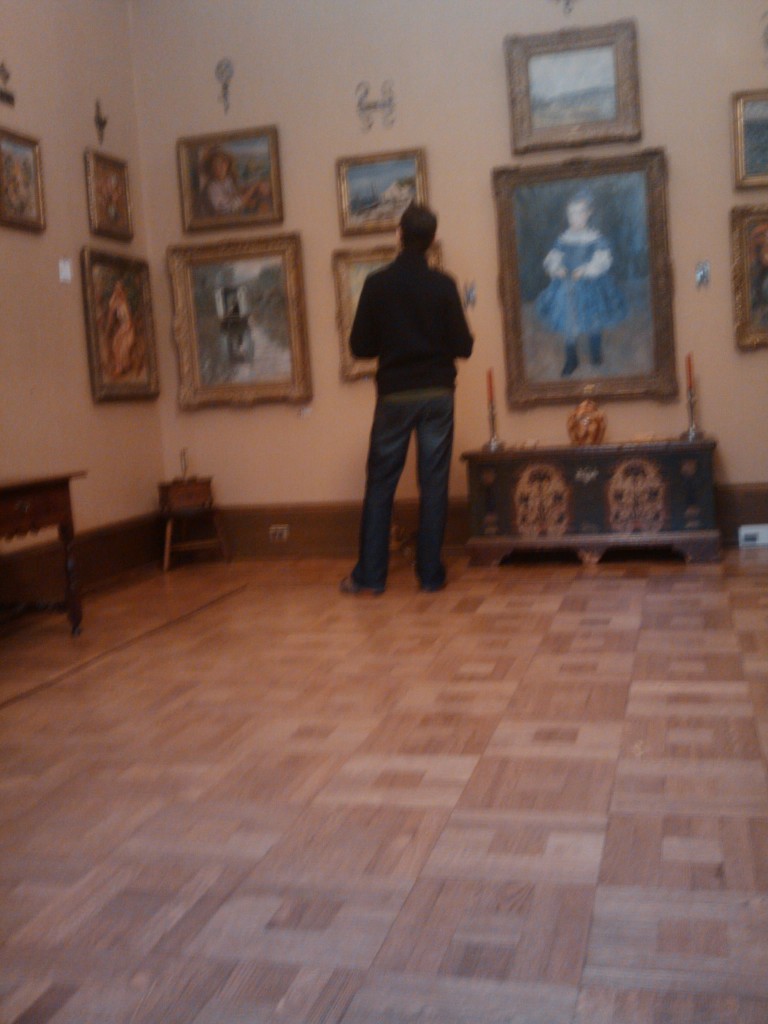 This photo proves Rand was an innocent bystander in my illicit photo-taking. 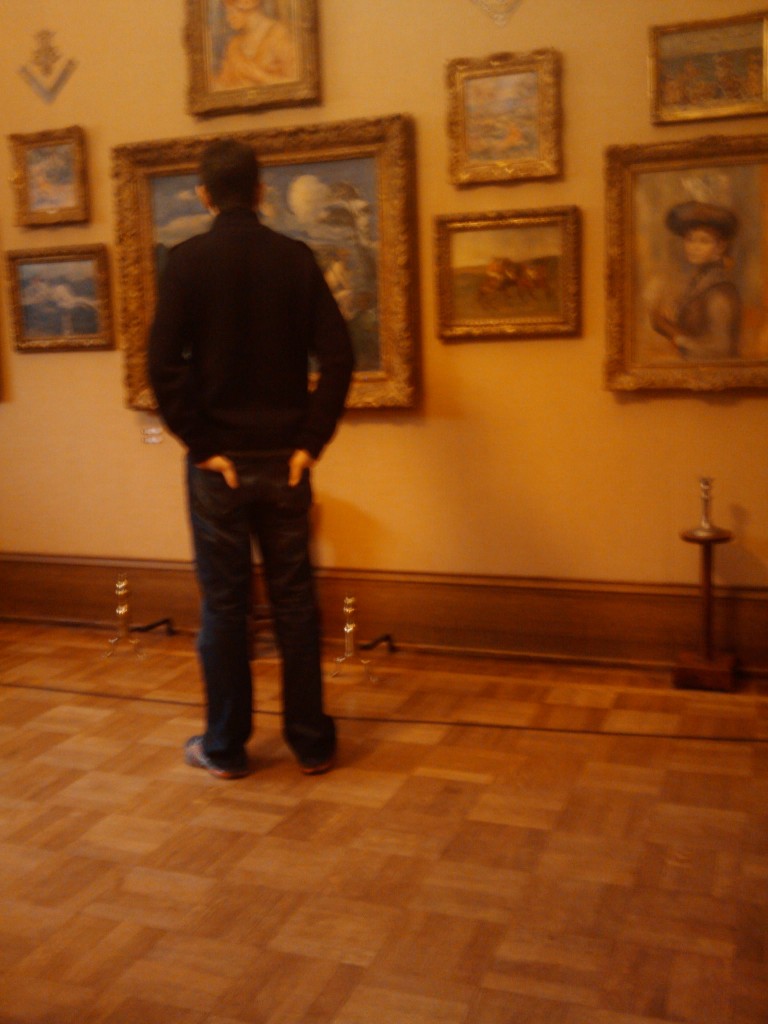 Really. He probably had no idea what I was doing.

Even though the museum wasn’t as crazy as I had anticipated, that doesn’t mean an intervention wasn’t necessary.

When Barnes died in the early 1950s, he left his art (and the museum-house in which it resided) to the local university, as not just an act of philanthropy, but also a flippant eff-you to the Philadelphia Museum of Art, of which he was not a fan (remember: this was years before Rocky made that place awesome). He wanted the school to continue to have access to the works so the students could study and learn from them, so he left stringent instructions in his will: the works could not go on loan (they would have to remain exactly where they were, in the same configurations on the same wall of the same building), and the museum could only be open two days a week to the public.

In the 90s, the folks on the Barnes Foundation board of trustees realized that they were running short of cash – the building needed serious repairs which they couldn’t afford (but were nevertheless necessary, as the paintings risked damage). So they challenged the will and were allowed to send the paintings out for loan to other collections. And just a few years ago, Barnes’ will was challenged again (successfully) in order to have the paintings moved to another, newer building, right next door to the Philadelphia Art Museum that he loathed so much. The new museum set to open in 2012. Naturally, there was a lot of controversy about the decisions – so much so that a documentary on the subject was made.

With all this context, visiting the Barnes was a loaded experience. The current iteration of the museum – the one Barnes intended – is crowded and drafty and not-at-all secure, especially considering that the 800 paintings in there (among them, 181 works by Renoir, 69 by Cezanne, 59 by Matisse, 46 by Picasso, 18 by Rousseau, 16 by Modigliani, 11 by Degas, 7 by Van Gogh, and 6 by Seurat, one of which is huge, and truly amazing) are valued at about $25 billion. It makes sense to move them, because already you can see some of the works feeling the effects of the humid air, cold winters, and hot summers. But knowing that it’s completely against what Barnes would have wanted … well, it’s a tough situation. After all, a man’s final wishes, no matter how crazy, are his final wishes. But if obeying his will to the letter means the works will eventually become ruined (something he obviously wouldn’t have wanted) should you still listen?

It’s hard to say. Of course, I understand a thing or two about not following rules, especially when something higher is at stake. It’s part of the reason why I was snapping photos like a mad woman with my cell phone camera, even though photography at the Barnes is prohibited. 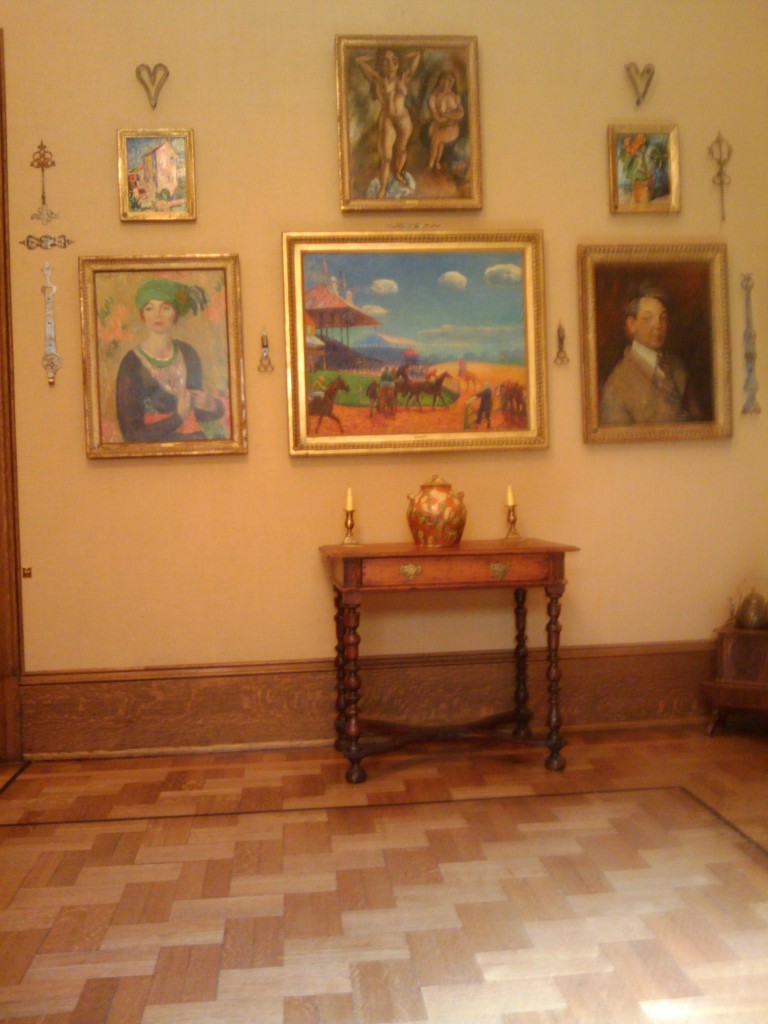 Would Alfred Barnes have hated me for doing so? Possibly. But I still appreciate the works he gathered together over the course of his life. So much so that I almost don’t have a problem with ignoring his will to preserve them.