I love my family. And I’m fairly convinced that at least some of them love me. Nevertheless, it seems that several of them are trying to kill me, or, at the very least, trying to ensure that I will get so hopelessly lost that I will never, ever be able to find my way home.

During my last trip down to San Diego, I decided to head down to the Arabic grocery store located not terribly far from my Auntie P.’s house. I had been there once before, and I had found it magical. Sugared nuts, dozens of different types of feta, a variety of pistachio- and walnut-studded cookies and pastries – it was incredible. The only thing the place lacks, for obvious reasons, is a hearty selection of pork. Oh, and the staff seems to hate everyone. But other than that? It’s a delightful place.

My aunt had accompanied me last time I went. She goes there fairly often (at least a few times a month), but despite this, she got us both terribly lost when trying to get there.

“I thought you go here all the time,” I said.

“I do.” she replied. She nevertheless had no idea where it was.

We finally made it by circling a few blocks, and eventually giving up and calling my uncle.

So, on my subsequent trip to California, several months later, I had figured that Auntie P. would be able to tell me how to get to the store. So I asked her, and she rattled off directions like a pro. I was so proud of her.

Of course, I didn’t believe for a second that she had the directions right, so as a precaution, I asked my uncle. Sure enough, his directions differed greatly from my aunt’s. Here you can see both of their directions. My aunt’s are on the top, my uncle’s at bottom. 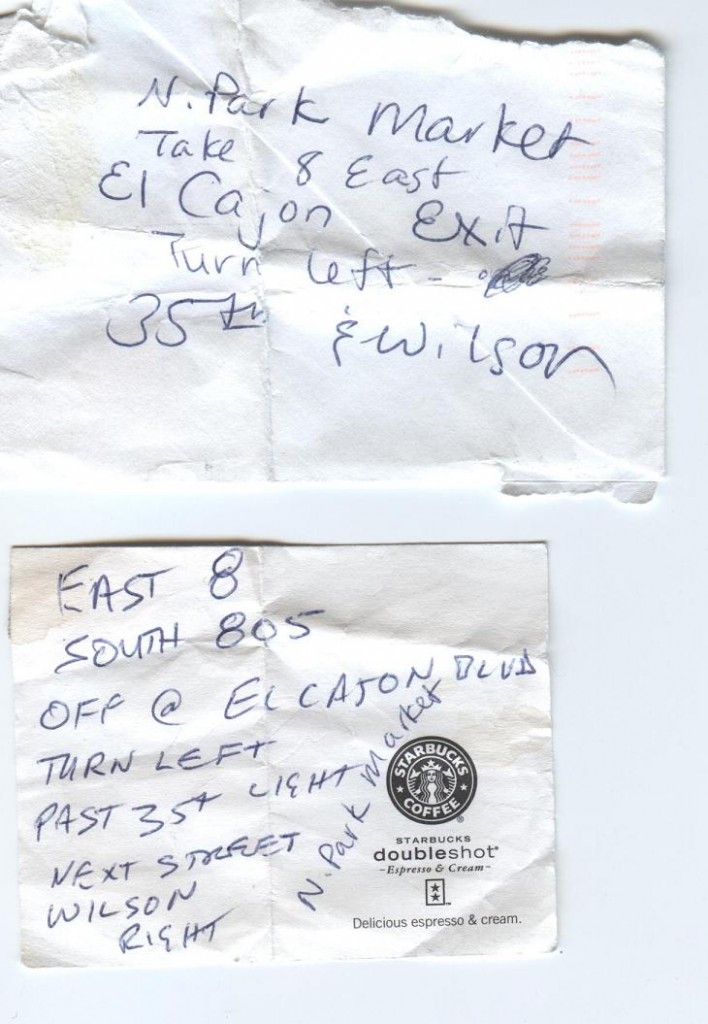 Of course, in the grand scheme of things, she got pretty close, but that’s not the problem, really. The problem is that certain members of my family give directions with absolute certainty, even when THEY HAVE NO IDEA WHERE THEY’RE GOING.