When I was 15, I had my first boyfriend.

On our first date, he took me out to dinner; we had pasta alfredo and milkshakes. It was quite sweet. We occasionally watched movies together, and while I’m sure even he will admit that while he was far (and I mean faaaaar) from being a gentleman, he waited a respectable time before making any attempts to venture into uncharted territory.

Fast forward 15 years (almost to the day) to this past weekend. Rand and I flew to Boise for a quick (but long overdue) visit with friends. Meaning that we went through security twice, and were subject to the new TSA screenings, which included our choice of back-scatter radiation or a federal-sanctioned groping.

The result? In short, the TSA owes me some pasta alfredo. And maybe a milkshake. 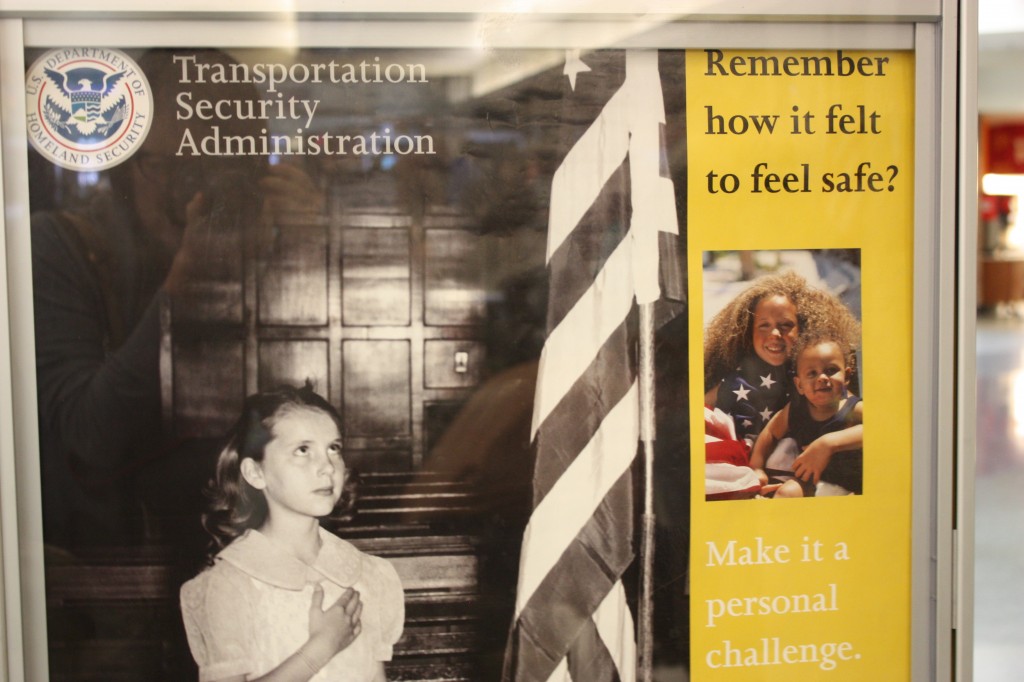 Actual TSA sign visible after going through security in Boise. Yes, there are kids wrapped in the American flag.

Rand and I flew out of Seattle on Friday morning. If you’ve been following the blog over the past few weeks, you’ll know that I’ve been thinking about the new TSA scanners quite a bit. They’ve had me fairly rattled, and I’ve been trying to figure out exactly what I could do about the whole thing. I even created a Facebook group about the cause. I knew the scanners had been installed at SeaTac, but I had spoken to a few people who had flown last week (including @pwcarey) and the scanners weren’t even in operation during their time at the airport. I wrung my hands together and hoped that would be the case when I flew out.

But, as usual, I had no such luck. When Rand and I reached security, the scanners were up and running. Now, apparently the full-body scanners are only being used if a passenger has been specifically selected for additional screening – at least, that’s what I’ve come to understand. But in the pandemonium of SeaTac, it seemed that most people were being sent through the scanners. There wasn’t any explanation or context given. No placard explaining the technology, or how it worked. There wasn’t even a sign saying that there were new search procedures in place. Instead, it seemed that the TSA had provided as little information as possible. It makes sense – the less people know, the less they’ll question what’s happening.

As I got to the front of the line, an agent told me to wait a spot a few feet in front of the scanner. To my left was the old-fashioned metal detectors of old. I was shaking, literally. My hands were quaking.

The agent, a woman, stared at me in a mix of shock and utter annoyance.

“You want to opt out?” she said, in an exasperated tone.

She sighed heavily and rolled her eyes.

“You realize you’ll have to have a physical pat-down?”

I nodded. She again sighed.

“Female opt out,” she said into a small speaker at her neck.

Rand was standing near me, and the same agent looked at him and waved him through the regular metal detector.

“Oh,” I said, not realizing it was even still in operation. “Can I just go through there with him?”

I watched Rand walk through. I wondered if perhaps I had opted out too early – maybe they wouldn’t have sent me through the scanner at all (I started blaming myself – that’s what people do). I waited. I held my hands behind me. I couldn’t hold them still. After a while, I was let through a little gate and led past the back-scatter machine to a carpeted area where they did the pat-downs. They explained to me the procedure beforehand, and asked again if I wanted to go through with it. I nodded.

Here’s the thing: the pat-down wasn’t actually that big a deal.

Don’t get me wrong: I disagree with it, with the back-scatter machines, with basically EVERYTHING that the TSA has done in the last few months. But the pat-down in and of itself wasn’t that bad – especially when you consider how much worse (and potentially dangerous) the scanners are. In the past, I’ve been “randomly selected” for “additional screening” and had to get pat-downs, and found that this one wasn’t that different (they do seem to spend more time around your naughty bits. They really focused on the inner curve of my boob. But how the hell could I fault them for having good taste? I mean, the inner curve of my boob is AWESOME). In the end, I was convinced that the pat-down was the best way to go.

It doesn’t mean the TSA isn’t grossly over-stepping their bounds. They definitely are. And it doesn’t make the whole situation any less ridiculous (at some point, when they were feeling the inner waistband of my jeans, the absurdity of the scene hit me: what could I possibly conceal in there?). But personally, I think the TSA was much more annoyed by the whole thing than I was (so obviously I will keep opting out).

Once the pat-down was over, I still wasn’t free to leave. The agent had to run a piece of paper over her gloved hands, which was then put inside a small machine to test for explosives. Once the  test comes back clean, you can gather your things and go.

As I stood, waiting for the test to come back (and thinking again about the sheer idiocy of it – I mean, I don’t have so much as a parking ticket to my name. The most un-American thing I do is listen to the music of Cat Stevens), I asked the agent who patted me down if lots of people opt out.

“Not really,” she said. “It’s just a few people who are (she put her finger next to her head and swirled it, signifying “crazy”). They’ve just listened to too much media. The machines really are safe.”

I simply muttered, “I’m not so sure about that.” And I quietly wondered to myself if she actually knew what “media” meant.

Seconds later, the results came back: apparently my body is not explosive, but I tend to think it’s still smoking (heh heh heh). By the time I was done, Rand, who is currently using a cane due to an injury, and is pretty damn slow, had been waiting for me a good while. This of course, is all part of the TSA’s plan: they want to make you wait as long as they can.

When I reached over to grab my things from my husband, I looked at my hands. They were still shaking. Uncontrollably. And that’s when I got mad. Because all this stupid security theater that the TSA had implemented succeeded in doing one thing, and one thing only: terrifying Americans. I hope the irony isn’t lost on any of you.

When we got to Boise, we joked to our friends that “I got groped for you guys!”

And on the way back to Seattle, at the end of a delightful weekend (thanks, Marshall!) I had to go through the intensive screening again – this time, Rand was selected, too (though “selected” is really the wrong word. People who are sent through the regular metal detectors seem to be the exceptions). We both opted out, both were patted down. The crew at Boise was far friendlier than the folks at Seattle – they were considerate and respectful of our request to opt-out (no eye-rolling, no heavy sighs).  Again, they explained everything they were going to do beforehand; they patted the inside of my thigh, the inner curve of my boob, the inside of my waistband. And again, my search took longer than Rand’s (even though he was also patted down).

This time, though, as I walked away, I noticed my hands were far steadier than they had been before. I attribute this entirely to the kindness of the TSA agents in Boise.

So … what can I conclude from the whole experience? Here are my final thoughts on the matter:

That’s pretty much it. If you guys have any additional questions, leave them in the comments, and I’ll do my best to answer.