As some of you may already know, I am a huge dork. My biological classification is dorkus malorkus. It is something over which I take great pride because, frankly, I’ve already tried being ashamed of my innate dorkitude, and that didn’t get me anywhere.

And so, I embrace my inner dork often (she likes hugs). Most recently, when Rand had a work meeting with Dharmesh (note: I don’t know what they talk about during said meetings, but in my mind they eat cupcakes and play video games. I am sad that I am not invited), I had one of two recreational options, both within walking distance of Dharmesh’s office: I could either go shopping at the mall, or head to The Museum of Science.

It was an easy decision, and I say this as an ardent mall-lover. Anyone who knows me well is aware of my passion for shopping and food-courts. I realize it’s a bit cliche, of course  – I’m a woman! I like  shoes and shopping! But perhaps it’s a bit of post-feminism that allows me to say that I like something stereotypically female, and I am nevertheless smart and confident. Also, these are adorable and by the time this post is up, I may have purchased them. But I digress.

Today’s post isn’t about shoes or shopping. Instead, it’s about dorkiness. And The Museum of Science in Boston, MA.

I walked to the museum, and even the trip around the mall to get there was quite awesome. You’ve got to hand it to those folks up in the Northeast – they know how to make their towns pretty. 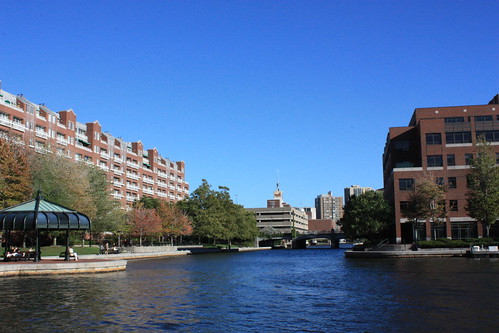 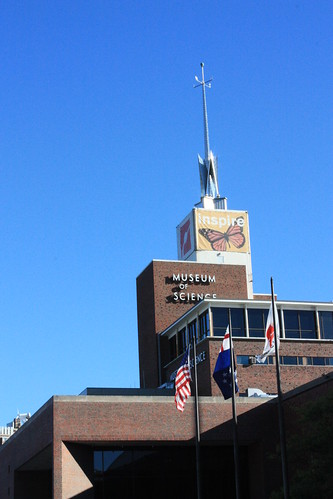 The museum is massive. I only gave myself about an hour and a half, after which supposedly Rand and Dharmesh would be done playing video games and eating cake (note: they were not. I could have stayed longer. FEEL THE GUILT, BOYS. FEEL THE GUILT). You could easily spend a day or long afternoon there, but be warned that you might hit sensory overload.

And I mean it – there truly is sensory overload. They’ve got lots of interactive exhibits, including ones that cater to children and the visually impaired. The were plenty of things to touch and pick up, and a few exhibits even played on the olfactory center. It was impressive. I even got to – SHUT UP – pet a beaver. Really. 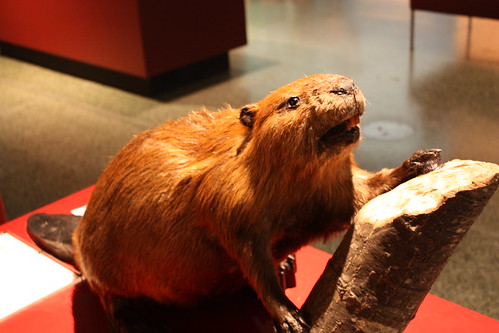 Remember how in old Disney movies beavers would whistle when they talk? I always loved that. 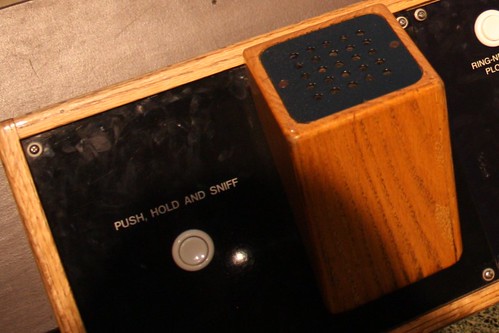 Like I said, the museum is huge, and it’s kind of staggering. I just looked up the exhibits I really wanted to see, knowing I couldn’t get to them all. High on my list? Dinosaurs. Including Cliff, one of only four nearly-complete Triceratops fossils in the world. 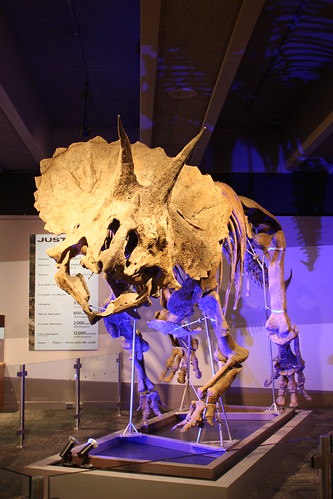 There's some sort of joke about Cliff Claven here, but most of you don't know who he is.

We spent some lovely time together, Cliff and I, and I only recently discovered that he might not be a Triceratops at all. According to some new research, Triceratops might actually have been just a juvenile form of the Torosaurus, which, if you’re like me, you regard as the Poor Man’s Triceratops, or Lame-o-tops. I cannot tell you how devastating this realization was to me, so let’s just say that I am nowhere NEAR over it, and talk about something else … like the T-Rex. 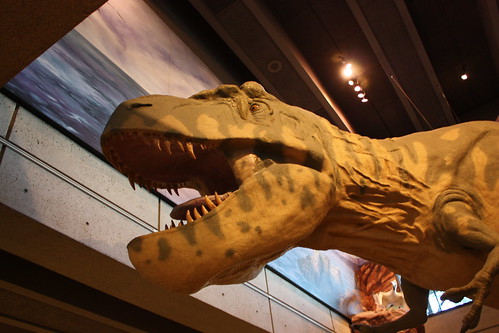 You'd never disappoint me, would you, dear? 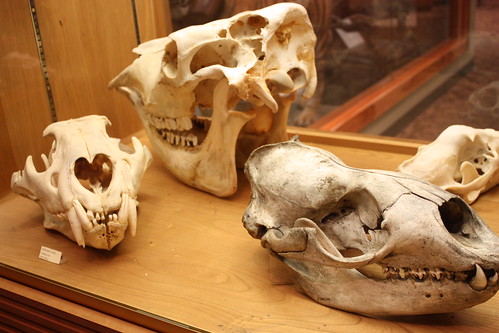 Including – I kid you not – petrified lightning. It’s an incredibly rare occurrence that happens when lightning hits sand, fusing all the grains in the immediate vicinity into glass. The result? A sandy glass mold of the lightning. It kind of looks like an enormous crab leg. 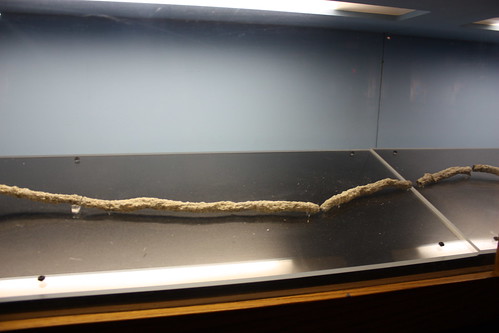 Though it may have been my hunger and geographic location in the American Northeast that caused me to make that comparison ...

Speaking of lightning, I don’t know what this next thing is called – but if I referred to it as “contained lightning in a glass bulb,” you’d totally know what I meant. Language is magical that way. 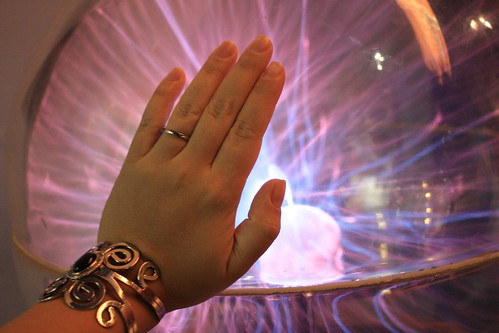 My fingers look kinda like sausages in this picture. The camera adds 10 pounds, even if it's just a shot of your hand.

I ventured into the optical illusions section, which had some pretty interesting mirrors that did nothing for my self-esteem, as well as an M.C. Escher exhibit (that’s right – they combined art and science in a single exhibit. I pretty much died of dorky happiness). 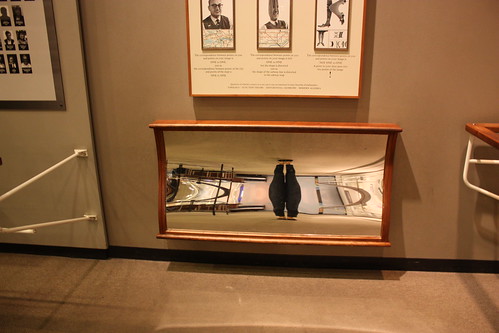 Yeah, because I wasn't self-conscious enough about my thighs already. 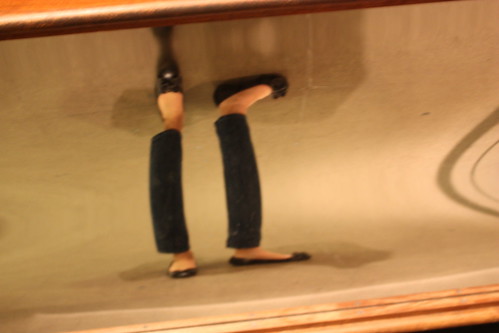 Oooh - much better. I'm so skinny! 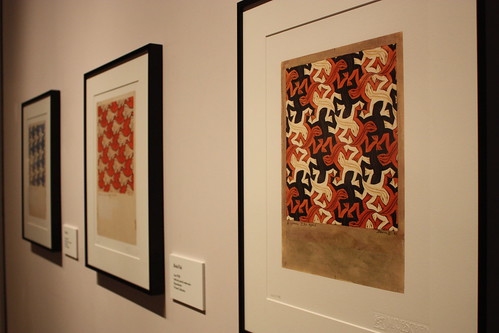 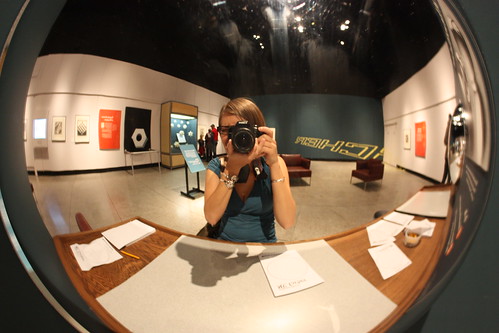 Like I said, there was gobs to see, and I really can’t do it all justice. So I’ll just note a few more bits of awesome, and then you can go book your ticket to Massachusetts, okay?

The location of the museum puts it right on the Boston Cambridge border – quite literally. This means you can stand with one foot in each of the cities. It kind of reminds me of the time I stood on the Prime Meridian. 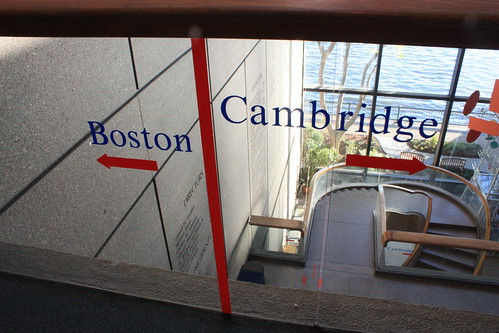 They also had a Naboo fighter from Star Wars hanging from the ceiling of one of the main halls. Let’s ignore the bad (that it isn’t from the original trilogy, that just saying “Naboo” makes me want to punch someone, and that George Lucas has destroyed everything good and pure about our collective childhoods) and instead focus on the good: Star Wars has a place in the Museum of Science. That is just cool. Also? R2! 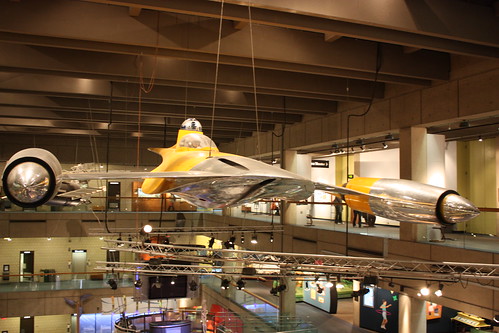 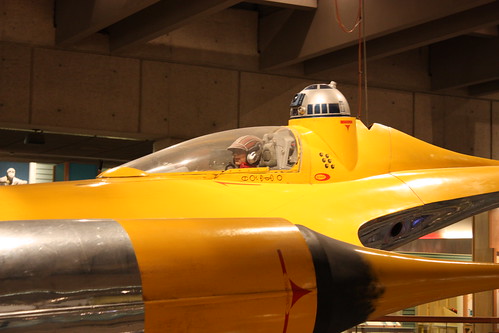 And while we’re on this crazy tangent, I don’t remember Luke Skywalker ever being this cute. This holiday season, we might need to reinstate our old nearly-forgotten family tradition of spending the whole day watching the original trilogy. Sigh.

Anywho, as for the Museum of Science, I highly recommend it, but give yourself more time that I did. I rushed out to meet Rand and Dharmesh, who had, upon my arrival, not only eaten all the cake and finished playing video games, but denied that they had done either, and claimed that they had been “working” the whole time.

At least my departure time from the museum was fortuitous – on my walk back, I spotted a guy on a unicycle … 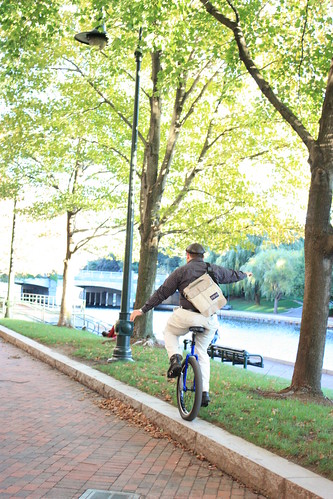 Had I spent more time in the physics section, I'd know how he's able to keep balanced.

I can only assume a man of such proud and wonderful dorkiness was headed to the same place I had just come from. Dorkspeed, good friend.