I may have sustained a serious bump on my head during our last stay at a Kimpton hotel, because the French doors in our room decided to plot against me (note: always be wary of the French). And I might have gotten into a slight skirmish with the packaging on my vanity kit, because I don’t like it when toiletry items tell me what to do. And I might have freaked out slightly when I encountered this in the shower … 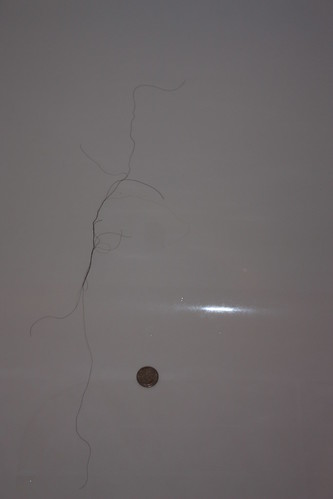 GAH! KILL IT WITH FIRE.

Yes, I put a dime next to it to illustrate juts how long it was. But you know what? Whatever. Like I said, this stuff falls into the “unexpected joys of travel.” Things are occasionally a little off, even if you are in a nice hotel. Hell, things are more than a little off in my own home, and no one seems to mind that (or if they do, they say nothing. Thank you, all of you).

As for the hair, it barely bothered me, because honestly, it was probably clean.

The point is, that despite the hostile French doors, the know-it-all toiletry items, and the trace evidences of a real-life Sasquatch left over in the bathroom, the Hotel Monaco in Portland – a Kimpton hotel – is awesome. For all sorts of reasons (the amazing staff, the lovely rooms, the convenient location, the afternoon wine tastings, etc), but one reason in particular: they let you raid the mini bar.

For the record, raiding the mini bar has always been my dream, but paying $7.00 for a half can of Pringles just isn’t in my blood. I am a thrift-shopper. I am girl who can’t say no to a bargain, even if it’s on something that I absolutely don’t need (especially if it’s in a discount bin. Put something in a bin, and I WILL BUY IT.)

But when we checked into the Kimpton, they gave us this: 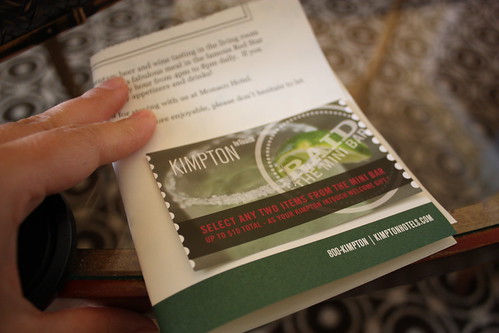 Because Rand is part of the Kimpton InTouch Loyalty Program (which you can join for free), they gave us a voucher that let us pick up to two items from the mini bar (for up to $10 total). And the stuff to choose from was pretty damn sweet. 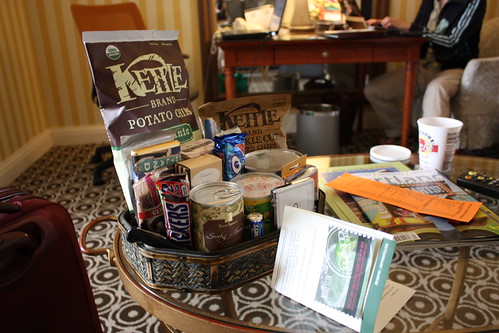 Kettle chips, Snickers, M&Ms, and yes, a tiny can of Pringles.

Rand and I were careful about our plan of attack. For example, we didn’t want to select the almonds, which were $7, because there wasn’t a single item for less than $4, meaning that we’d have exceeded our price limit. So, after a bit of strategizing, we made our selections.

Obviously, the Kimpton Hotels pay a lot less than $10 to offer this service to their loyalty program members – but the perceived value is pretty huge, and it’s so darn fun, too. I can’t think of another instance where such a small expense to the company yields a more positive impression (for me, at least).

In short? Awesome move, Kimpton hotels. We’ll be back.