I’m trying out a new feature of the blog – a sort of catch-all for some of the crazy things that I see in passing during my travels. Things which don’t really have a place in longer blog posts, but which deserve their own spot of attention for being so bat-shit insane.

This week’s WTF Wednesday photo took place in San Francisco, which, really, is surprising to no one. It was there that I saw this: 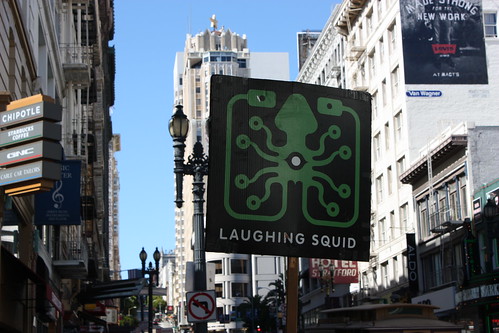 It caught my eye because, well, Laughing Squid hosts my site. I figured it was simple street advertising. Then I saw the back of the sign … 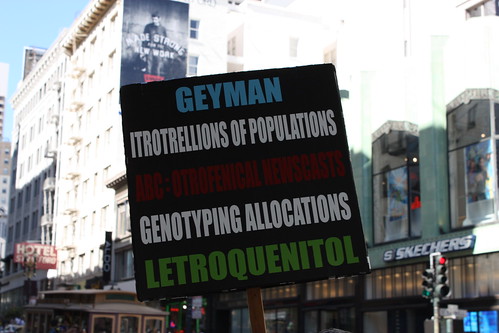 It contained the ramblings of a crazy person.

Was Laughing Squid engaging in bumvertising? I’d seen this once or twice around Seattle – homeless people have panhandling signs, and a local company (usually an internet startup) will pay to have their website listed on the bottom of the sign. They reached a bit of prominence in the Seattle area several years ago, but I haven’t noticed them as much recently. I guess it probably didn’t work all that great, for obvious reasons (the most prominent being that society tends to ignore the homeless).

I was at first a bit bothered that Laughing Squid was partaking in bumvertising, as it seemed exploitative. Then I read a bit more about the company and all their endeavors to give back to the community, and I felt a bit differently: clearly, the guy carrying the sign wasn’t poorly fed or sickly. In fact, he seemed pretty physically healthy, and well put-together (though a weensy bit out of his gourd). Still, he was quite polite and told me all about Laughing Squid and their services.

Did Laughing Squid rehabilitate this homeless man? Give him a new lease on his crazy life?

Not exactly. I did some research on the guy, and discovered his name is Frank Chu. And he is not homeless. But he is a trifle insane, and a bit of a celebrity in the San Francisco area (he was voted Best Pathological Citizen in 2007). There was even a brief documentary made about him.

Mr. Chu is out on the streets of San Francisco, tirelessly explaining his views to anyone who will listen. He wants to impeach President Clinton (yes, still), and there’s something about 12 Galaxies that I don’t really understand. Apparently he’s so popular around the city, that he is able to charge for sponsorships of his sign. In addition to Laughing Squid, Chu’s sign has featured ads for Quizno’s Subs, Rasputin Music, and candidates for several California elections.

So … well, I guess that explains that.