My name is fairly unusual. I’ve rarely met another one – so the fact that my aunt happens to have a very good friend in San Diego named Geraldine is kind of a funny thing. Especially when we’re down there visiting.

When other Geraldine’s husband calls her name, we both turn around. Ditto for when Rand calls me. I suppose if I had known another Geraldine at some other point in my life, it wouldn’t nearly be as strange … but she’s literally one of the few I’ve ever met, and the only one that’s been in the same group as me.

The other day, we were both sitting at a table at my aunt’s, and I commented that we had the highest concentration of “Geraldines” in all of Ocean Beach. I have no doubt that the claim I made was an accurate one. Because really, who on earth is named Geraldine? Except for say, someone’s grandmother, which I often hear when people ask for my name.

I smile and nod. It’s a name that was popular a hundred years ago. So naturally, when Rand and I booked into a little boutique hotel in San Diego a few days back, and one of the girls at the front desk told me her grandmother’s name had been Geraldine, I smiled.

I politely told her “Thank you.”

And to illustrate her point, she gently tugged back the collar of her shirt … 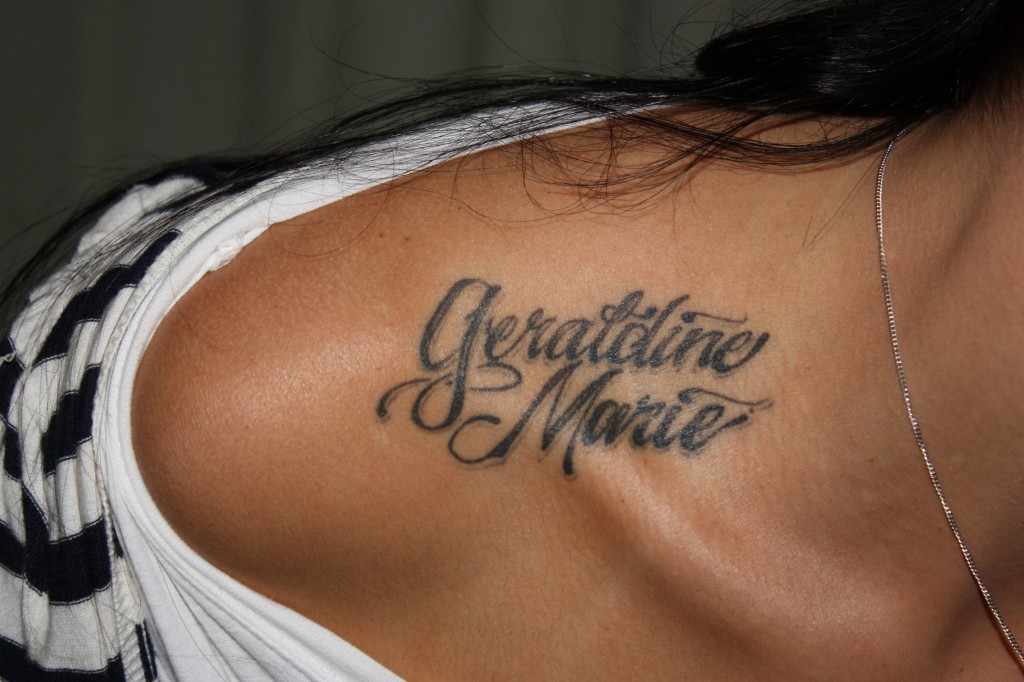 Seriously, how random is this? (For the record, my middle name is NOT Marie).

I was positively gob-smacked. San Diego not only has a Geraldine my age, but the adorable girl at the hotel had “Geraldine” tattooed across her collarbone. We chatted a bit more, during which I might have developed the weensiest girl-crush on her (I mean, can you blame me? She looked like Winnie Cooper and she had a tattoo of my name! I wanted to eat popcorn and watch old Cary Grant movies with her – a definitive sign of everlasting friendship).

I suppose it’s bound to happen: you travel enough, you meet people with your name. Or your name tattooed on their body. Once, Rand and I went to a wedding in Cascade, Idaho, where we encountered not only the bride’s aunt Geraldine, but a friend of the groom’s who was named Rand. Shortly after, we checked into a hotel, and the doorman was also named Rand. Not “Randall” or “Randy”, but simply Rand. My husband was stunned.

And he was stunned again when I showed him the above photo, minutes after I took it.

Yes. WTF, indeed. And awesome, too.

Share your WTF experiences: have a weird run-in with someone who has your same name? Spotted a tattoo that resonated with you? Tell me about it in the comments section below!