Sometimes, I find it’s very easy to predict what I’d like.

For example, if you took me to some sort of cake exhibition that required us to wear pretty clothes and comfy shoes, I would enjoy that very much. On the other hand, if you made me listen to “comedy” of Dane Cook while sampling flavored mayonnaise, I might pray for a swift death. I think I am uncomplicated in this manner. But sometimes, sometimes I will like or dislike something passionately, and it’s difficult to foresee.

So when my husband was driving me to Buellton, CA, because I was curious about why it was the split pea soup capital of the world (a distinction which I find equally dubious and hysterical) and he saw the signs for Solvang, CA, he immediately suggested we go there instead.

“You are going to love Solvang.”

Again, it’s one of those things that I doubt anyone could have predicted: that I would like (nay, ADORE) the cheesiness of a small Danish village in the middle of California. But I did. Of course, it helped that they had actual danishes, of the frosted variety. 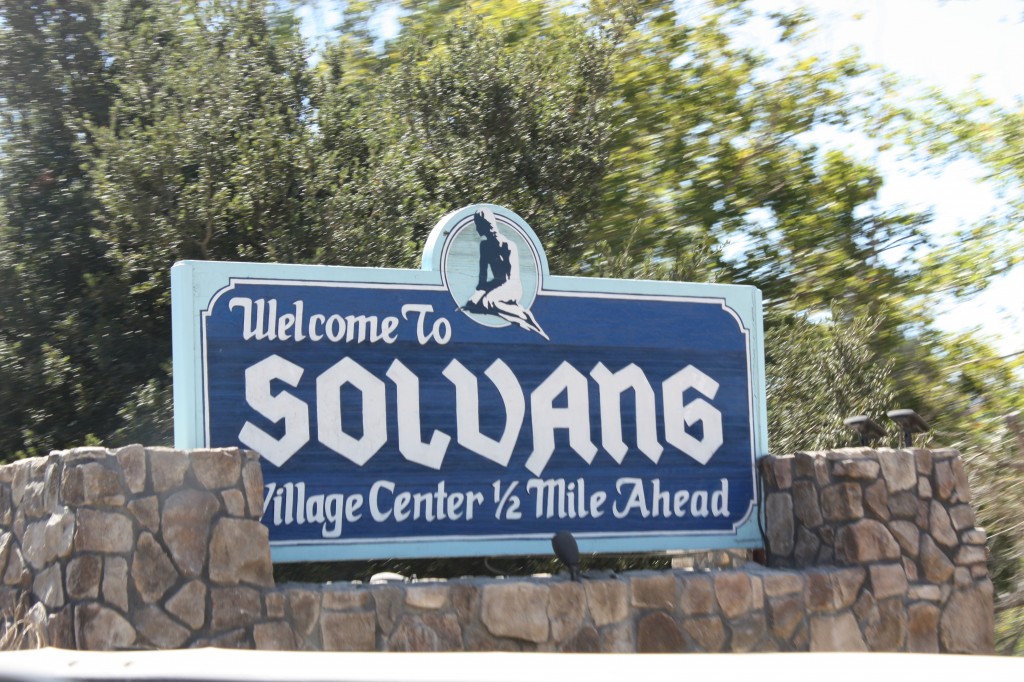 Something is awesome in the state of California.

Rand had been there once years before – he had promptly forgotten about it, but when he saw the signs, he insisted we go. I was sputtering with excitement. It turned out to be a lot like Ashland, but with more marzipan. The town was founded in 1911 by a group of Danes who spent a few nasty winters in the midwest, said, “F#ck this. I didn’t leave Denmark to freeze my ass off in Kansas,” and smartly headed towards California. 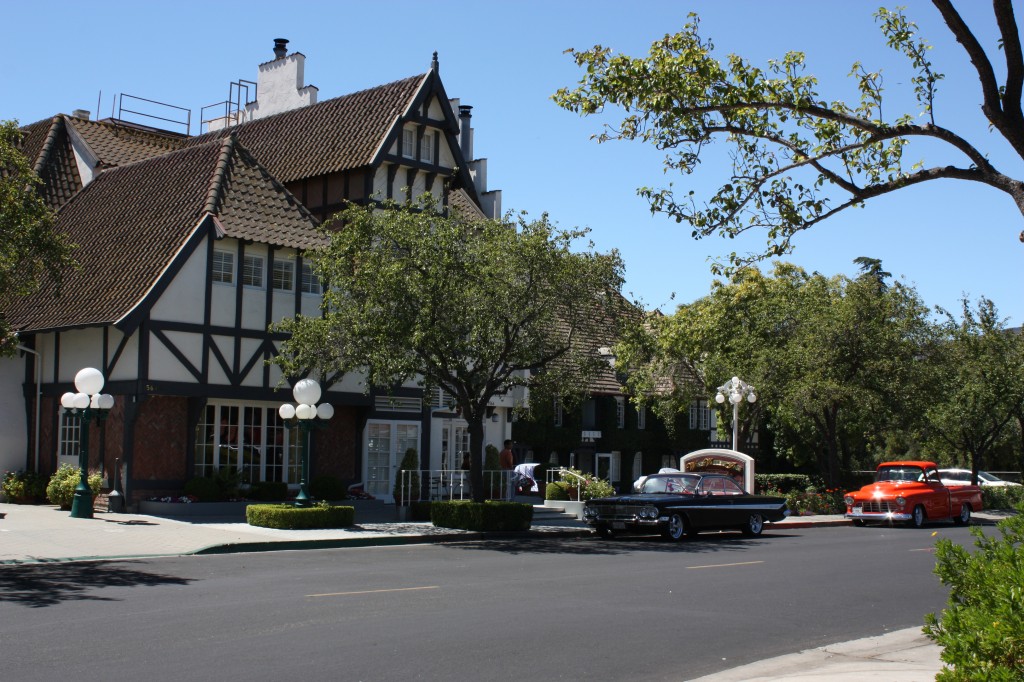 Some of the places kind of phoned-in their Danish-ness. Like the Viking Motel. I’m sure it’s a lovely place, but as my husband noted, probably not a lot of pillaging and abducting of women goes on there. This is probably for the best, as that sort of thing can really put a crimp in your Trip Adviser reviews. 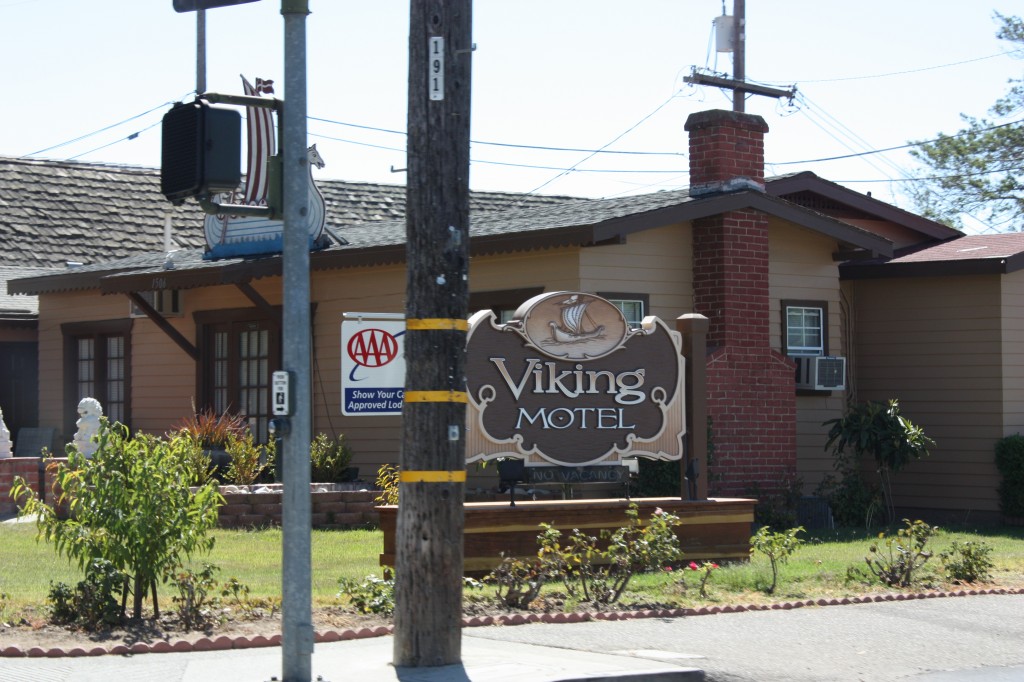 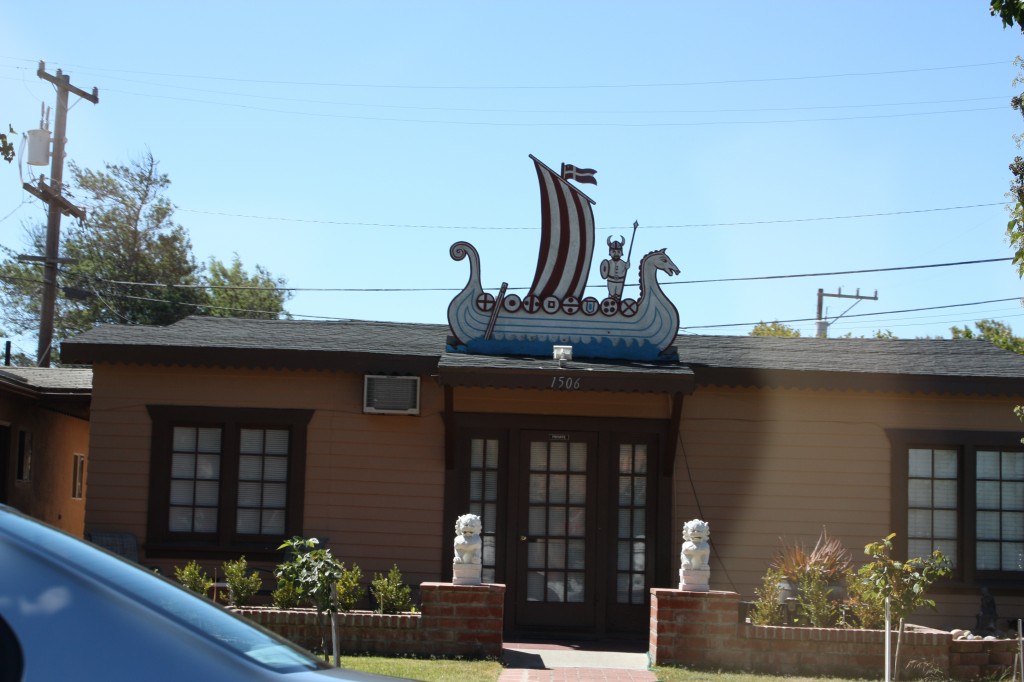 Other hotels were a little more Scandinavian in appearance, but were nevertheless ill-advised … 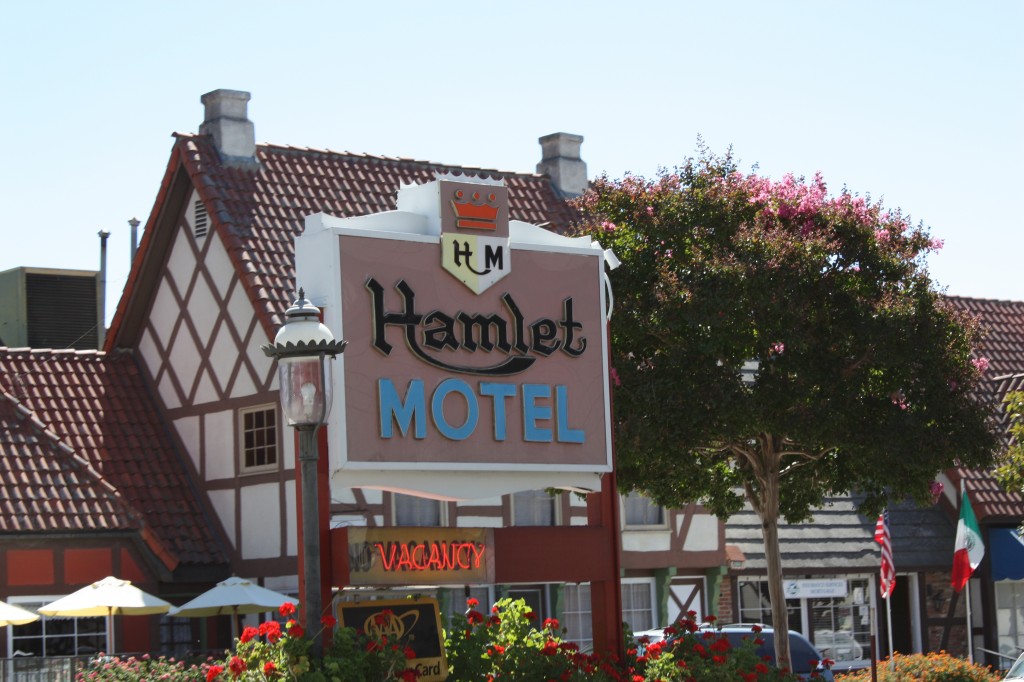 Spacious closets for the lady who doth pack too much.

No one wants to stay at the Hamlet Motel. Just imagine the Yelp reviews: “Friendly staff and spacious rooms, but the carnage in the great hall was a bit bothersome, as were all the sword slices in the drapery. Not recommended for children.”

Did I mention I was loving the heck out of this place? I was able to make dorky Shakespearean references, did my best Scandinavian Christopher Walken impression (yes, this is something I do. I think it is awesome), and then? A whole house, dedicated to pancakes. And none of that international pancake nonsense. Just Danish ones. This was fine by me, as the one time I tolerate ethnocentricism is in the case of sweets. 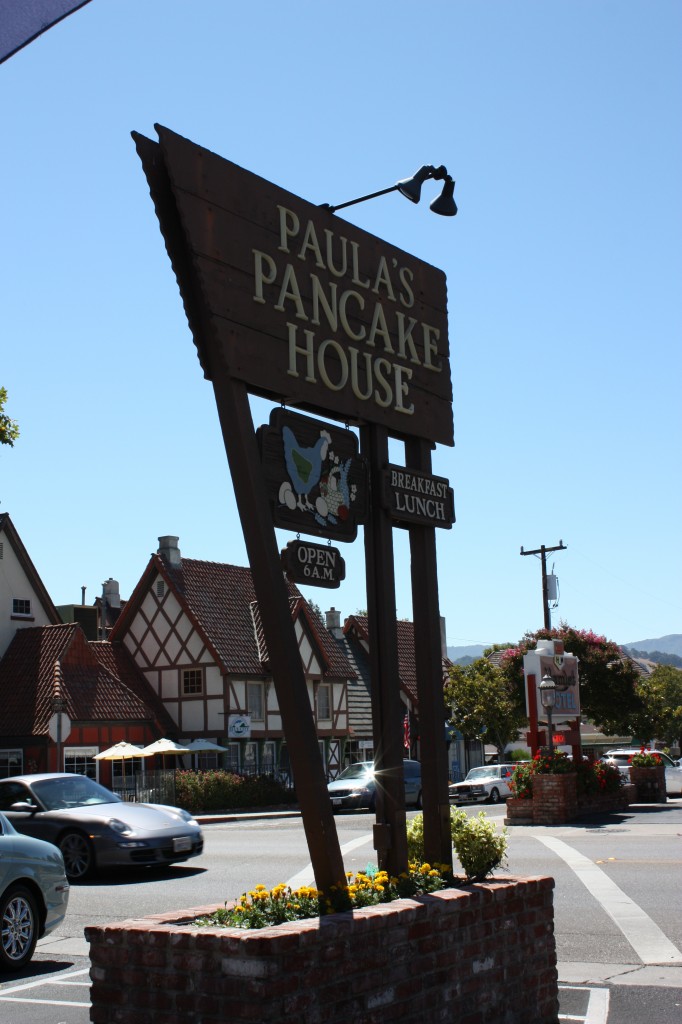 Rand proceeded to order a plate of pancakes roughly the size of a Volkswagen. I opted instead for the house-made sausage and eggs. And while there’s a clearly a “Your mom” joke there, I’m going to forgo it and simply say that it was awesome. Also, your mom likes house-made sausage (I was lying before). 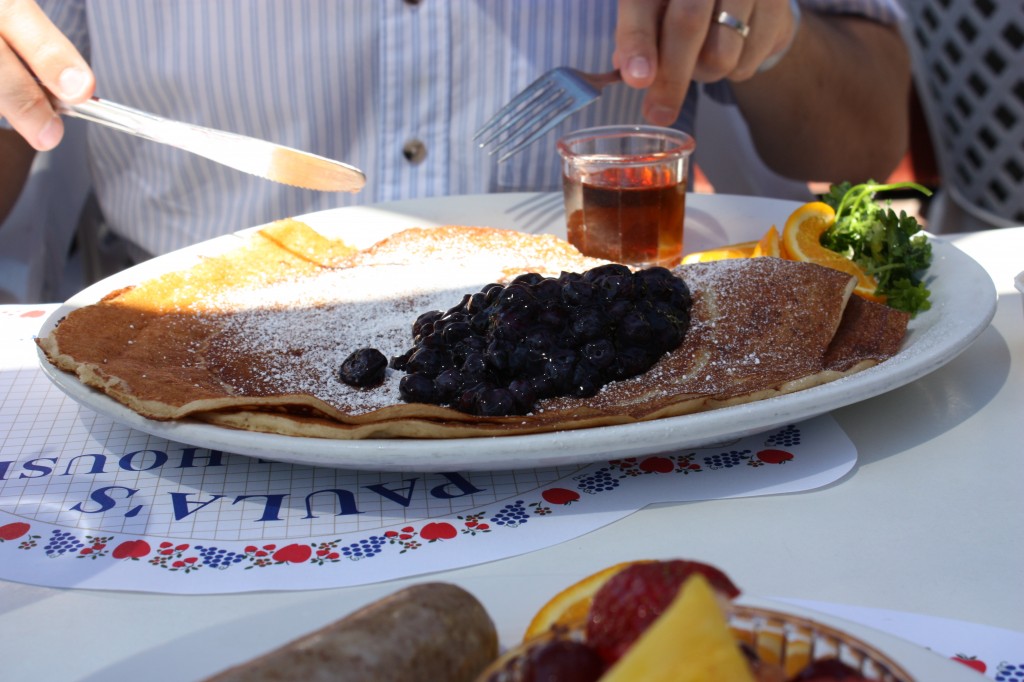 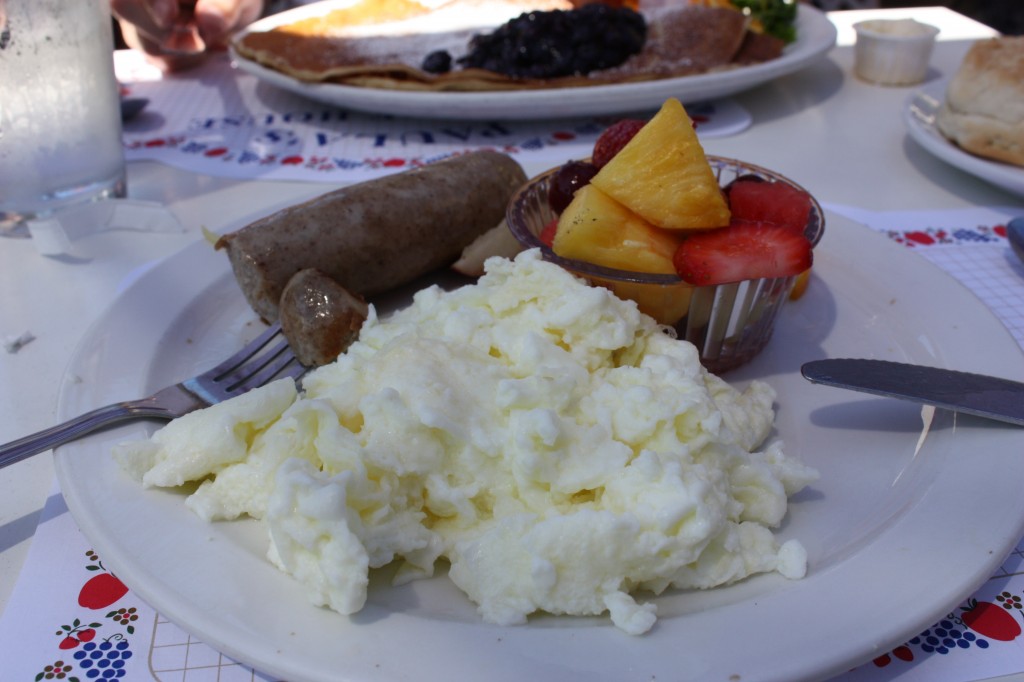 After breakfast, we walked to the bakery next door, and purchased an assortment of cookies, because I like to know where my next dessert is coming from. I half expected the sweets to be overly-sugared frosted confections (as they appeared to be). It’s not that I mind – I like a diabetic coma as much as the next girl – but I do try to avoid that sort of thing, because I find I am slightly more charming when I am conscious. However, the cookies were perfect – not too sweet, deliciously fresh, and (since this is my blog and I can create my own reality) low-fat! 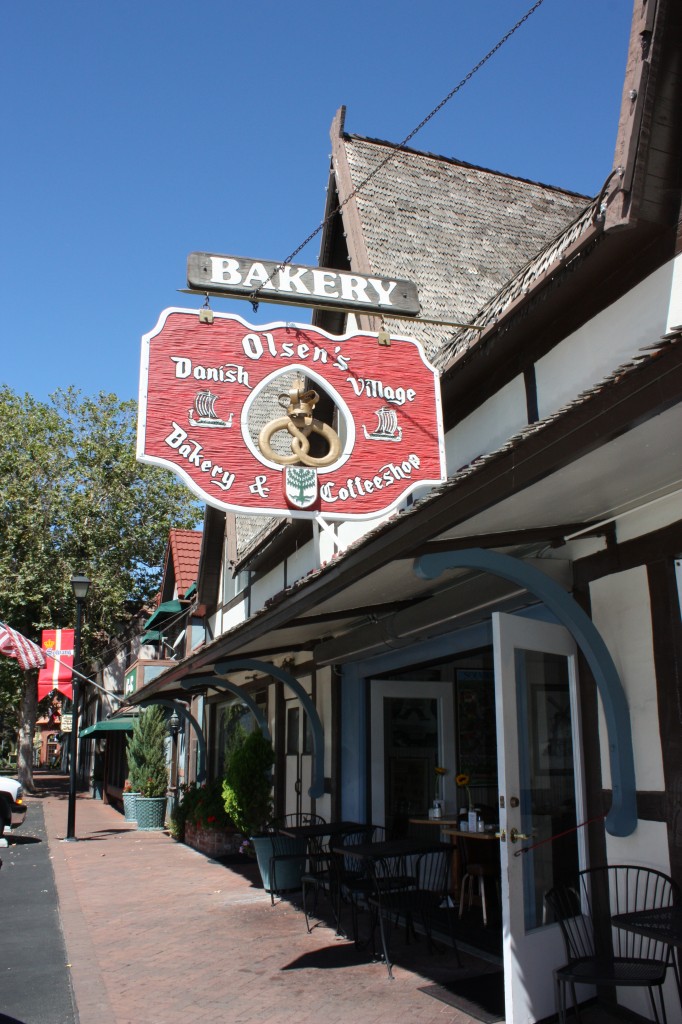 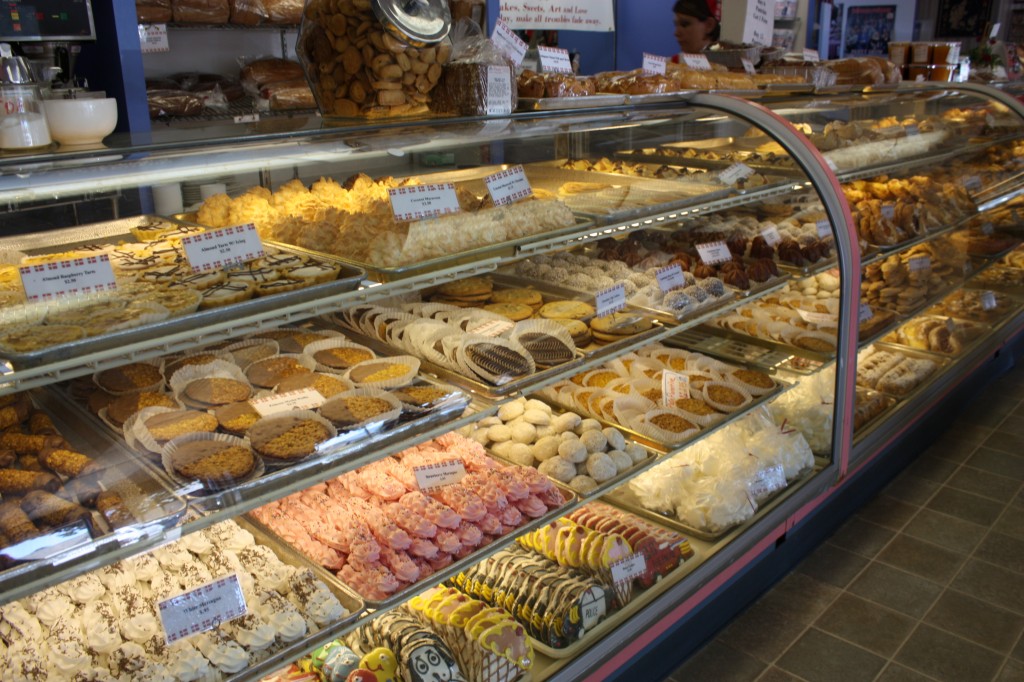 The glass is there so you don't drool on stuff.

Afterwards, Rand and I walked around town. I was a bit nervous leaving all our stuff in the trunk of the car (you should NEVER LEAVE ANYTHING IN YOUR CAR while traveling) but the biggest crimes in Solvang involve defending King Claudius and saying you like Disney’s version of The Little Mermaid better. So thankfully everything was fine, and we were able to enjoy the shops of Solvang in relative peace. And what shops they were! 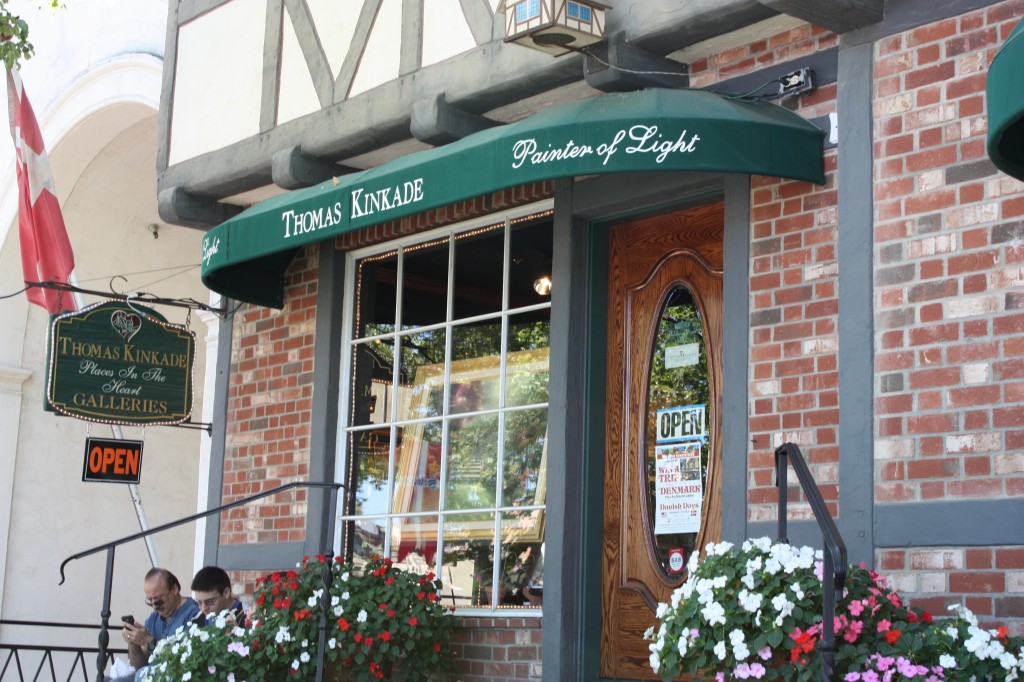 And a place with depressing needlepoint! 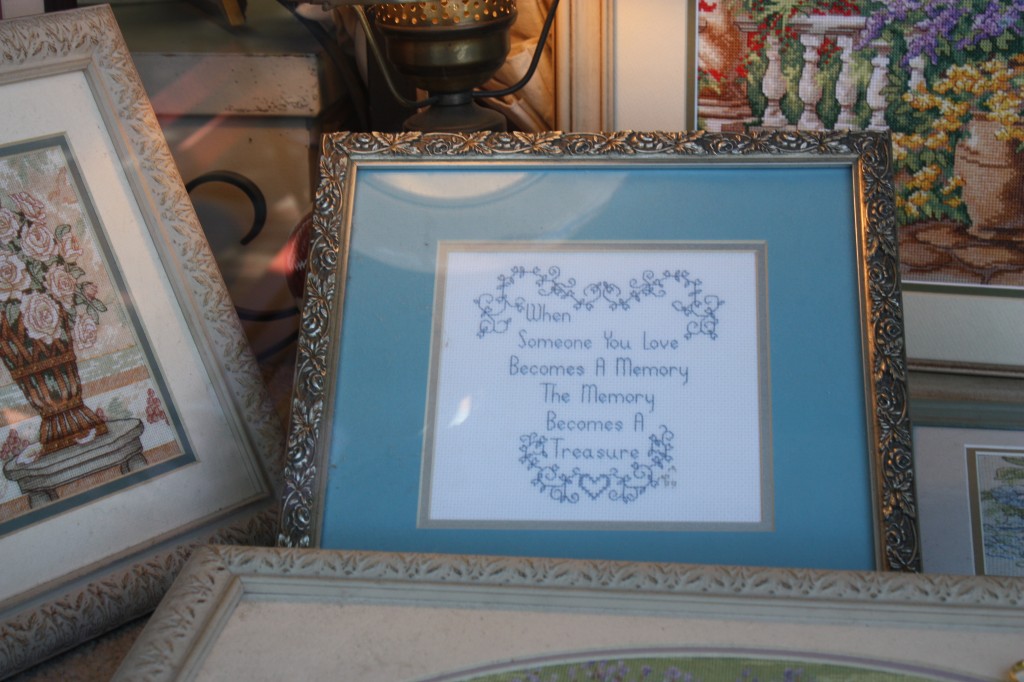 We then stumbled on to the most magical place of all: Yule Hus. IT’S AN ENTIRE STORE DEDICATED TO CHRISTMAS, YEAR-ROUND. I know, I know. I kind of freaked out, too. They even have a Facebook page (I am going to like the sh!t out of it later). The store was full of all sorts of crazy. I highly suggest that you move to Solvang immediately so you can do all your shopping there. 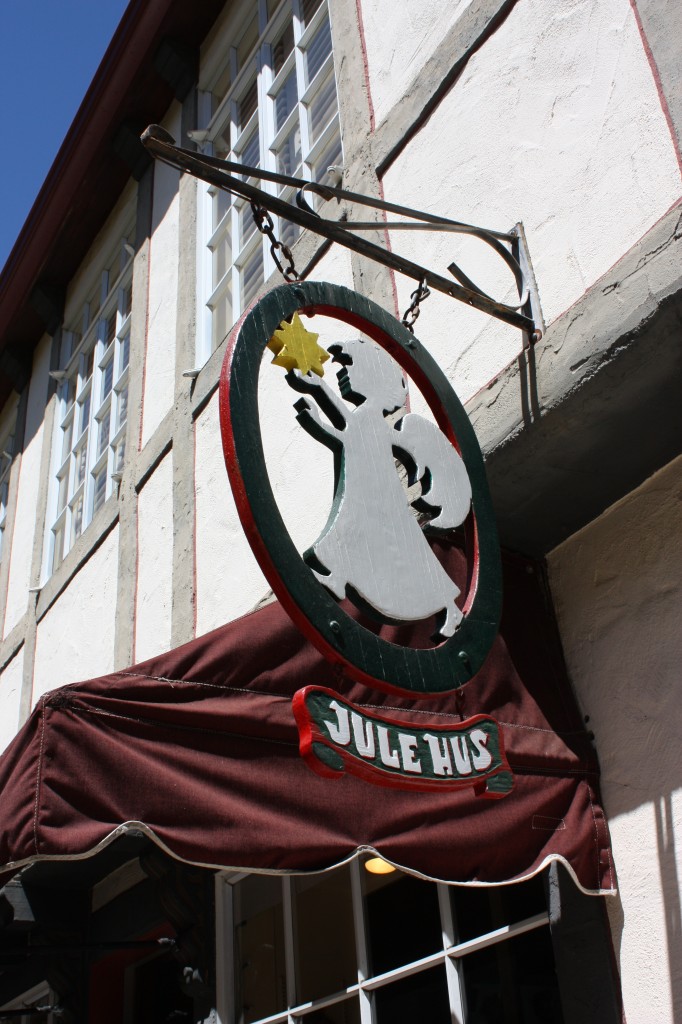 Yule Hus: Like getting beaten with AN AWESOME STICK. 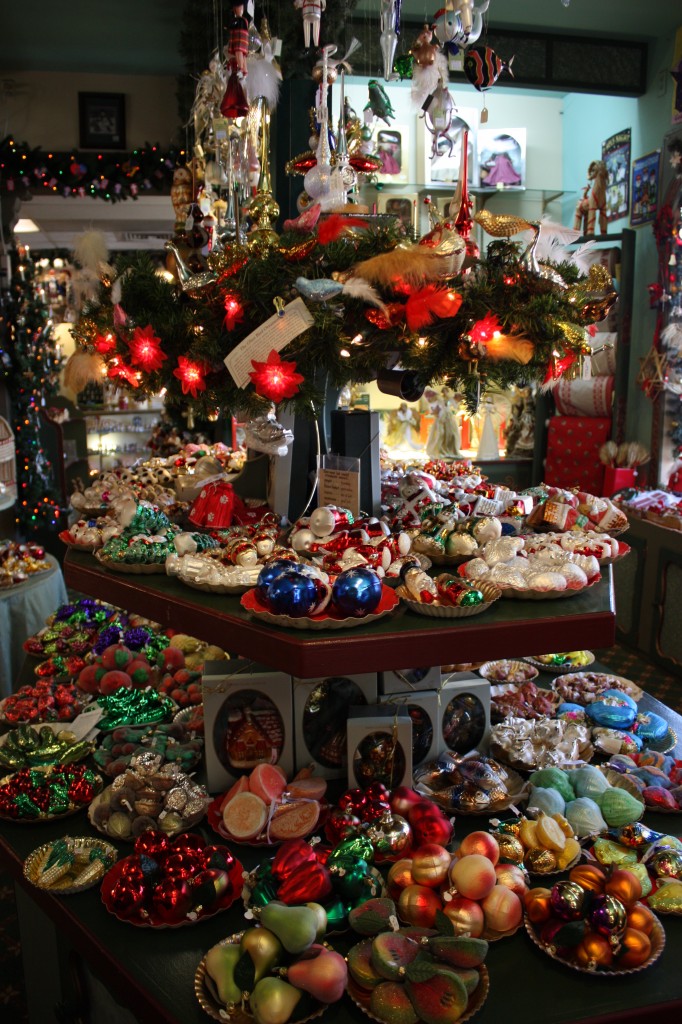 Did I mention it was August? 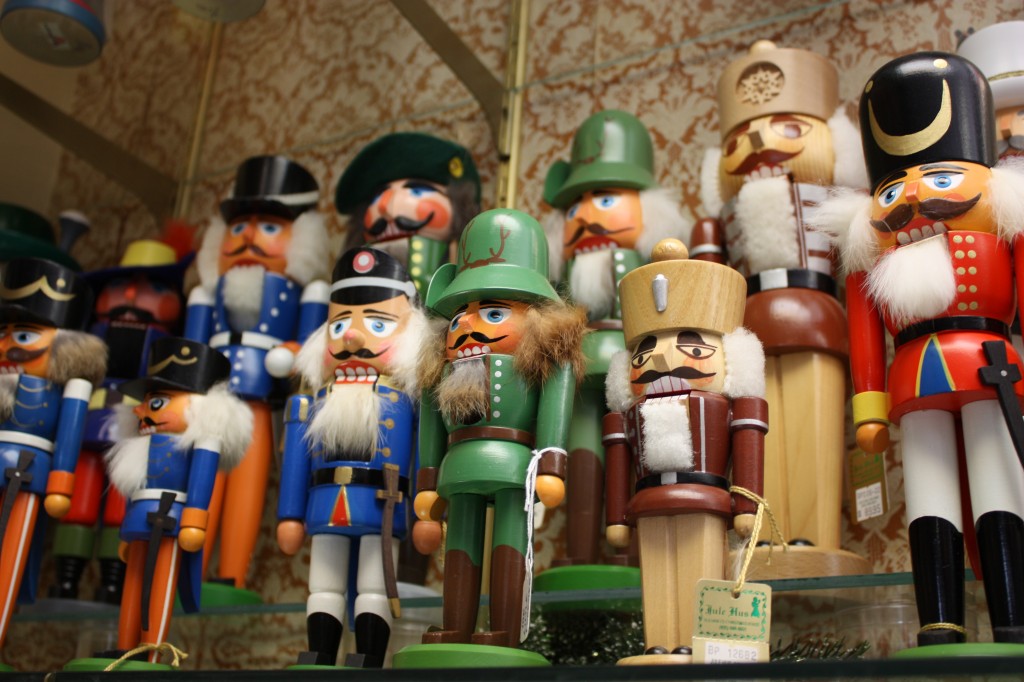 I can’t say if you’ll like Solvang as much as I did, but I suspect you won’t. I loved it madly and weirdly. It was the kind of thing I doubt I could have predicted (though if you had told me about the plentiful amounts of baked goods, perhaps I would have suspected it). Fortunately, I travel with a guy who knows me, possibly better than I know myself … 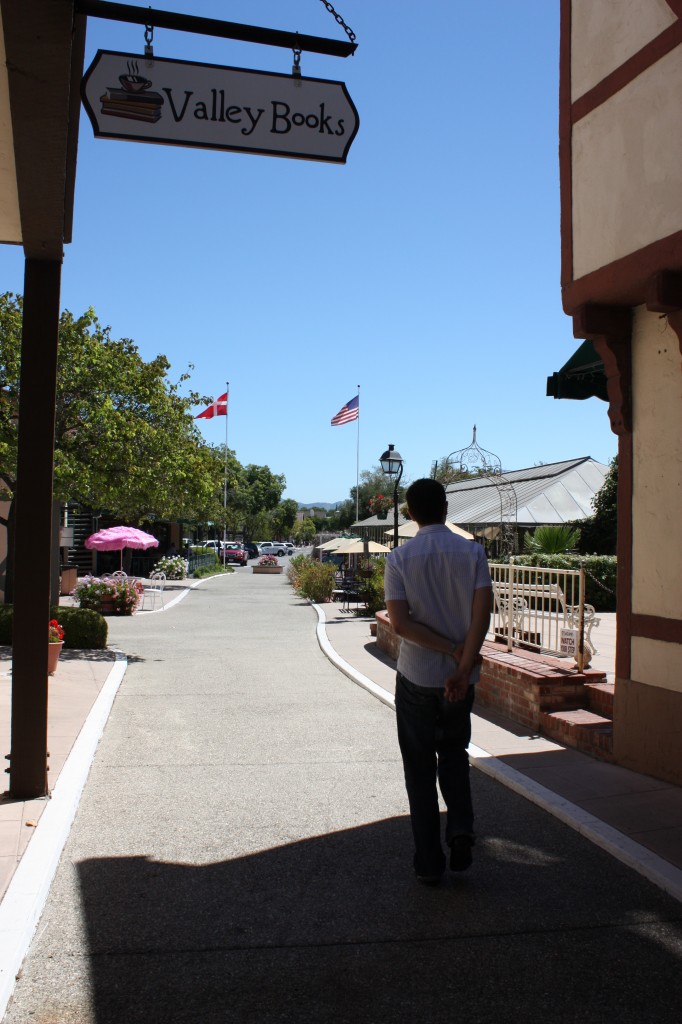 The one thing better than baked goods.

And on the list of things that I love madly and weirdly, he beats out even Solvang.