More than anything in the world, really (with one glaring exception). I am obsessed with it, in a way that few people will understand. Occasionally, I will rifle through old pictures, and find photos of cakes I made long ago. I remember them fondly, like old lovers.

I long for them in the middle of the night. When I daydream, my thoughts fall to them. And I must make a conscious decision, every time I am at the grocery store, to buy groceries and not an entire sheet cake or three.

Recently, a friend of mine got married, and I started dancing around in anticipation of the cake, and other numerous goodies that were on the dessert table. And after standing an excruciating few minutes in line (DEAR GOD THE HUMANITY) I was finally able to get to the front, where I might have piled an obscene number of sweets onto my plate.

Later, I sat amongst my friends, frosting smudged across my lips, drool dripping from my mouth, and slowly slipped into a mild diabetic coma. It was glorious.

“I want more cake,” I managed to wheeze. My lungs were being crushed by buttercream.

“Then get a second slice,” someone said.

“Then try one of the little cakes,” they suggested.

“You mean a petite four? I already had one.” (I know cake terminology well.)

This is where it started to get embarrassing.

At this point, everyone started to giggle. I would have, too, but my abdominal muscles had turned to sponge cake. I have suppressed any shame over my sweet-tooth. I simply eat my weight in vegetables and do copious amounts of yoga in a struggle to counteract it. And still, despite my efforts … This baby? She got back.

Moments after finishing my plate of goodies, Rand appeared.

“I brought you a slice of cake,” he said. This is why he is the love of my life. However wonderful cake is, it will never be able to bring me another slice of itself.

“I couldn’t possibly,” I said, and everyone laughed. Then, slowly, their grins faded. Why? Because I ate the third piece.

A few months ago, another friend of ours – Rob – got married, and we were unable to make the wedding, as it was in England. When Rob got back to the states, he told us he had a surprise: he had brought us a slice of his wedding cake.

I nearly died. Cake. FOREIGN CAKE. So overjoyed was I by this news, that I didn’t bother to ask any of the relevant questions that may have already popped into your mind: Mainly, how the hell can cake survive a trip back from the U.K in one piece? And how old was this particular piece, anyway?

After all, Rob got hitched in early July …

But no, these things did not bother me. THROW CAUTION TO THE WIND, my heart screamed. THIS IS CAKE!  NEITHER RAIN NOR SNOW NOR SHELF LIFE NOR SPECIOUS QUALITY WILL DETER ME. Ahem. Besides, as Rob explained, English wedding cakes are generally fruitcakes, which means they’re loaded with alcohol, which preserves them. Longtime readers know how I feel about alcohol and dessert (Blah, blah, blah margarita cupcake!).

And they last forever. No, really. FOREVER:

They weren’t like our “sponge cakes” as Rob described them (which is an accurate term for what we consider cake here, and yet, we never specify that. We generally assume all cakes are sponge cakes, don’t we?). They have a limited shelf life. But what Rob had brought? It might outlive us. 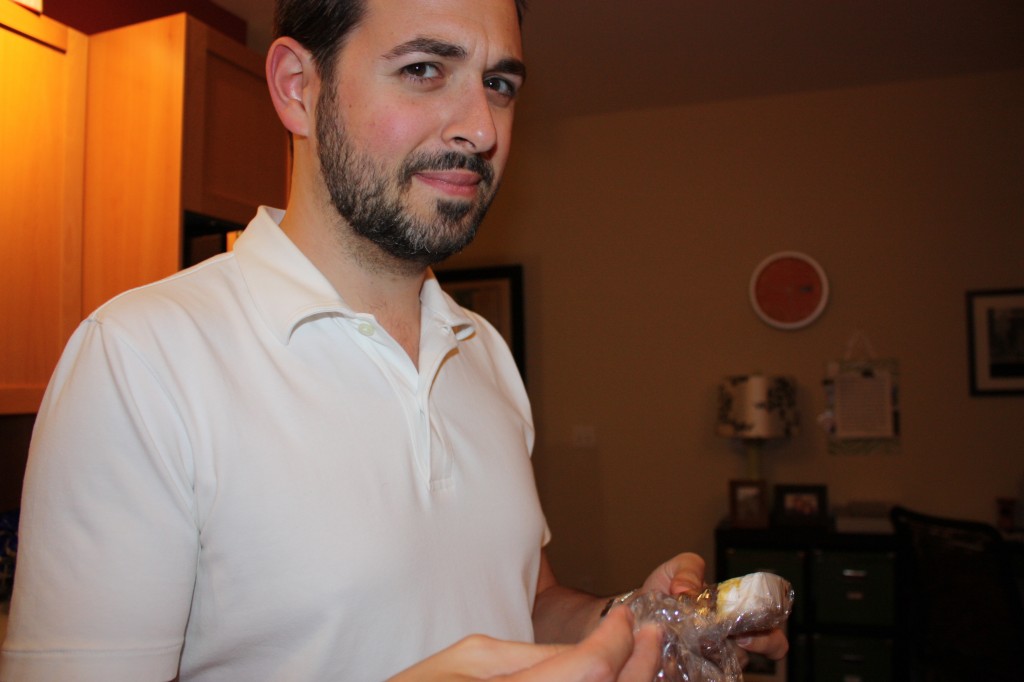 Rand distrusts the cake. But wouldn't you, if you met your greatest competition for your wife's affection?

Rand was wary. I was not. After all, it’s cake. My first love. My truest friend. So when Rob handed me a plastic container containing a dark slice, I might have done a happy dance.

But I tried to reserve my excitement. This was a different animal, I reminded myself. 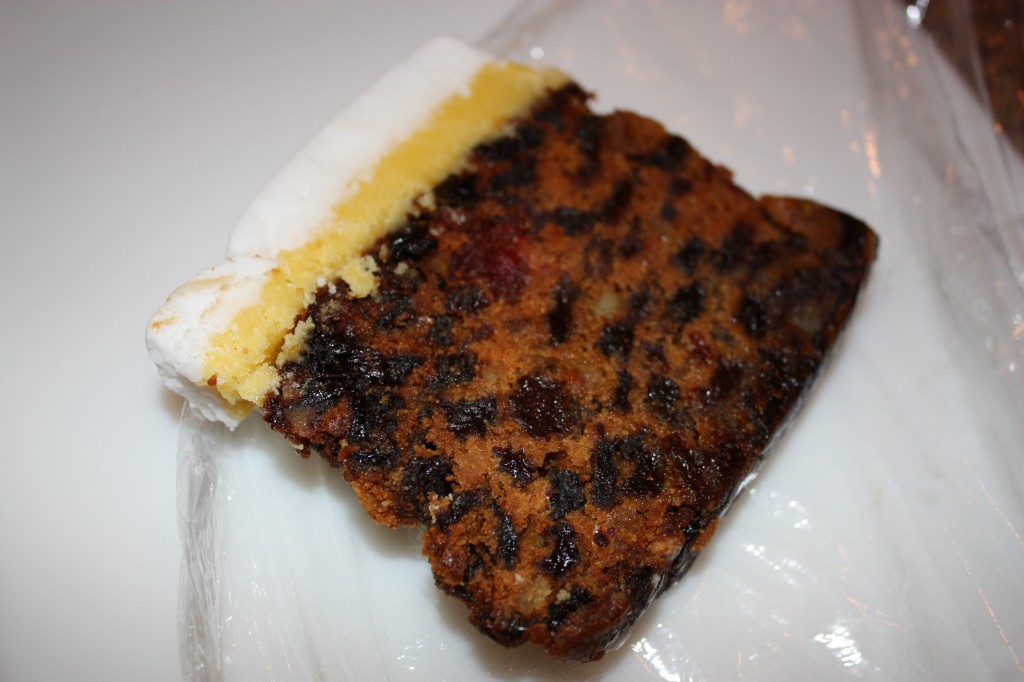 I scooped up a small bit with my fork, and brought the dark, dense confection to my lips. The verdict? It tastes of rum and spices, dried fruit and sugar. It reminded me of the holidays. There was a layer of marzipan and icing on top, which for some reason brought to mind a licorice all-sort: chewy and fragrant and very, very sweet.

Rand and I both had the same reaction: It was pretty good. Clearly, it was an excellent articulation of an English wedding cake … but it wasn’t what I had hoped it would would be. I won’t crave it in the middle of the night. I won’t think about it when my husband is out-of-town and I’m feeling lonely.

Pictures of me eating sponge cake are unavailable, as I can moving into my face at speeds my camera can’t keep up with. This is not the case with fruitcake: 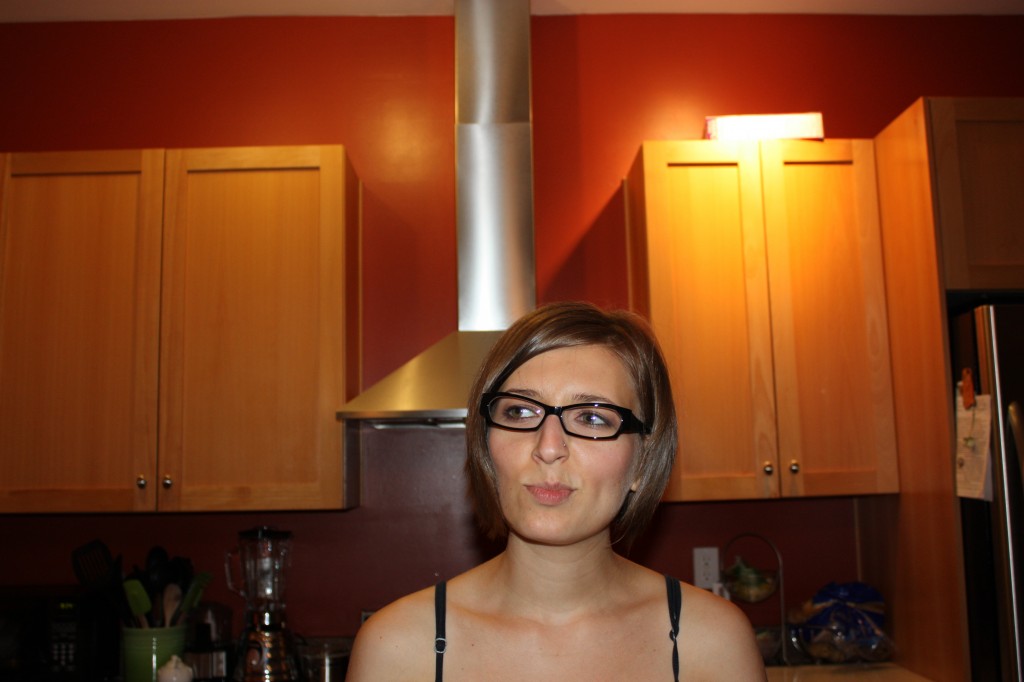 Things that make you go, "It's pretty alright."

Was it cake? By definition, perhaps. But in my heart, it wasn’t. The proof? I didn’t devour the whole thing.

Well, not yet anyway.

*Note: there were cuter photos of me eating cake, but Rand decided to make them cleavage shots, so they’re not included in this post.