I have, on occasion, been known to get a idea stuck in my head, and no matter how crazy, random, scientifically inaccurate, or illogical, I cannot seem to shake it. I once claimed China was an island (thank you, American school systems!). I am convinced, to this day, that Duran Duran sings Mysterious Ways. I actually refuse to accept that it is anyone else. I’ve considered amassing a fortune (by whatever means necessary) and paying Duran Duran to record Mysterious Ways, thereby proving the accuracy of that notion (let’s face it: you’ve never actually seen U2 sing it, right? So it could all be a hoax).

And after a few minutes editing Wikipedia, I could actually be right about all this stuff.

Occasionally, I get a crazy idea in my head that turns out to be correct (like the time I got into a screaming match with a kid in middle school, after I claimed that spiders weren’t insects. Take that, Vipul Shah). This is awful, because then I start to lack the necessary dose of self-doubt that people who entertain crazy notions should have.

So, when I got the idea to go to the Presidio because, I assumed, there would be amazing things to do, fantastic views of the Golden Gate bridge and lots of food vendors giving away free caramel apples exclusively to girls named Geraldine (what? It’s my fantasy), I never for a second questioned whether or not it would be a worthwhile trip.

Let me just say, my excitement was ill-advised.

However, as I left my hotel on that faithful morning, I was brimming with confidence. After all, even if things went awry, it would make for a good story. And, in a way, it did … especially if you find tales of me pulling my hair out entertaining (and many of you apparently do, because you keep coming back).

It was a six-block walk to the transit center from the hotel. It was here that I planned to catch the PresidiGO!, the shuttle which travels from downtown San Francisco to the Presidio. I checked the shuttle’s website, and learned that after early August, I would need to head to the new Transbay Terminal to purchase my pass and catch the shuttle.

So far, so good. Until I arrived at the terminal. Which looked like this: 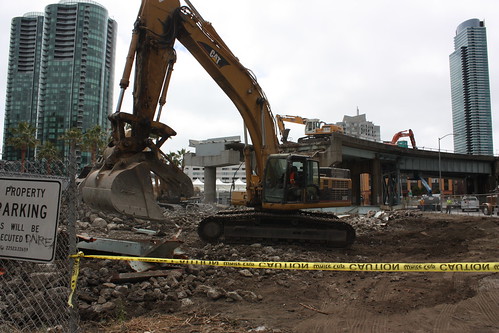 It was AN EFFING CONSTRUCTION SITE. Okay, so clearly I wasn’t in the right place. This couldn’t have been the terminal mentioned on the website, right? Except … 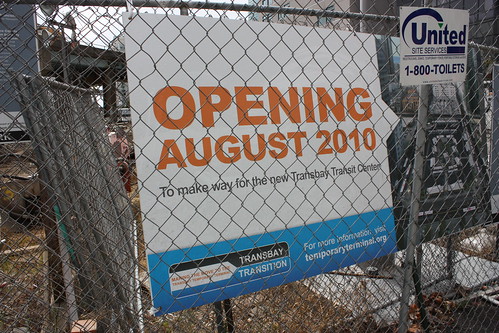 This was not a problem, I told myself. My blood sugar was up. I had an adorable outfit on, which was going to look adorable in the 500 photos I intended to take of myself in front of the Golden Gate Bridge, which I assumed would loom in the distance. Everything was going to be fine. (In retrospect, I should have probably gone to the website listed at the bottom of that sign. But I was a little distracted with the bulldozers and all).

I strode up to a nearby Starbucks, and asked if they knew where the PresidiGo stopped. They had absolutely no clue.

“I see people lining up on the street just outside here,” one girl said, noncommittally.

I headed out to where she had pointed, but found nothing. So I headed back to the construction site. After all, I couldn’t be the first person with this problem, right? I found one of the gentlemen working there, who looked somewhat official. I mean, he had a badge. And a reflective vest. And pressed slacks. Clearly, a man of knowledge and authority

I politely asked him where the PresidiGo stopped, and he told me I needed to go to the old Transbay Transit Center.

Of course! Since the new one wasn’t operating yet, it made total sense to that it would stop at the old center. So I walked over a few blocks to where the old transit center was supposed to be.

By this time, I had been walking for well over an hour. And thanks to San Francisco’s schizophrenic microclimate, I had taken my jacket on and off roughly a dozen or so times. I was starting to sweat through my adorable shirt. I was getting cranky. I didn’t understand where the hell I needed to go.

I popped into another store and asked the gals who worked there if they knew where the Transbay Transit Center was.  They didn’t, but supposedly it was close by. One girl noted, however, that it was closed.

Wait, CLOSED? No, that couldn’t be right. I wandered out onto the street. I was relieved to finally find a sign indicating the terminal was close by, but apparently the directional arrow had been scratched off. This did not bode well. 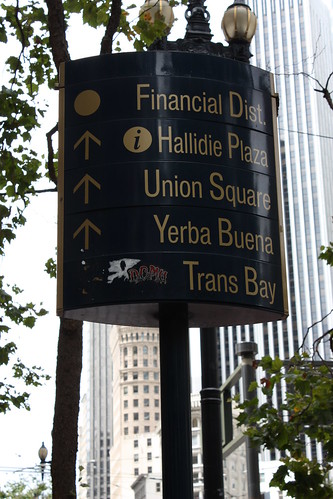 Finally, I managed to stumble upon the old TransBay Terminal. It was an abandoned wasteland. 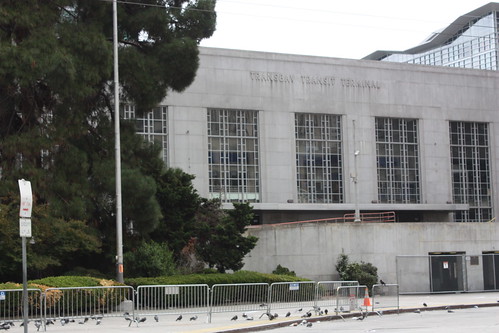 A banner was draped over one side, with composite images of the newly renovated center, and a sign that read: “Opening 2017.” A polite but territorial transient stood at one entrance of the old terminal, directing people towards the construction site. Apparently many of the buses were stopping there. Had I asked anyone else at the construction site, I likely would have found this out, but instead, I asked the one guy in nice slacks who also happened to be full of it.

I sighed. And headed back to the construction site.

I won’t lie: I was on the verge of losing it. When I got back to the construction site, I saw a small, unfinished building at one end. I politely asked two supervisors if that was the information desk, and they informed me that it was.

“And I can just walk across the lot and get there?” I asked. I wasn’t taking any chances: I had just seen a guy get yelled at for doing something similar. And I was not in a mood to be yelled at.

“Of course!” they replied. “Just walk over and you’ll be right there.”

So I started to head towards the information desk. And was promptly yelled at by other construction workers, who screamed that I couldn’t cut across the lot. I threw up my arms in exasperation. “THEY TOLD ME I COULD,” I yelled, as I headed back to the sidewalk and cast looks of death at the guys who had provided me the misinformation. They apologized profusely. It wasn’t their fault. I was at the end of my rope. (On a side note, I felt like a New Yorker for a few brief moments, and it was AWESOME).

I slowly started walking around the block, along the sidewalk, in order to reach the building (that was only about 50 feet away had I been able to cross where I wanted). Sometimes, when I get hopelessly lost, I imagine what would happen if I had a kid with me. They’d get impatient, and cranky, and wonder why their mom was such a colossal screw up. This came to mind as I walked around the block. I remembered something someone had said to me months ago: a quick, seemingly-innocuous jab referencing the fact that I didn’t have kids. At that moment, as I considered my ineptness, and those words, I wanted to cry.

I was standing now, in front of what I thought was the information booth, but upon further inspection, was a Greyhound station. I wondered if the two places could be one and the same, but instantly dismissed this idea. Later, I’d find out that I was in the right place (the Greyhound station was serving as an interim PresidiGO stop and info center). But right now? I was hopeless.

And with that, I may have had a meltdown of epic proportions.

There might have been some sniffling. And some foot stomping. I may have made a few phone calls to my husband, telling him that he was married to an idiot who was a terrible mother to her fictional children THAT THANK GOD WERE ONLY FICTIONAL.

And the scene of this lovely display? AN EFFING CONSTRUCTION SITE.

Slowly, I walked back to the hotel. I reached our room 2 hours after I had left, now sweaty, tired, and emotionally distraught for no good reason. I took a few deep breaths. And a shower. I had a much needed reality check (the things upsetting me were not problems. There are people without food or homes or legs or eyes and THOSE are problems. Not finding a transit center is not an effing problem. It means I am very lucky because I get to travel and write. Even when things don’t go as planned, they’re pretty great).

I regrouped.  I had a snack. I left a determined note for my husband. It declared that I was going to the Presidio. It may not have happened that morning, but still: I was going.

Or was I? To Be Continued (tomorrow) …