Okay, I admit it: I’m officially worried about you. This post was going to be another Dick Move!, but when I started to consider things a little more, I switched gears from “blinded by rage” to “concerned about your well-being.”

Seriously, we need to talk.

Have you completely given up?

Because it’s starting to feel like it. When I visited back in the spring with Desiree, I had hoped that the things I witnessed (cranky personnel, jacked-up prices, and a general air of pure hate for mankind) were simply a phase you were going through. I mean, you have gone through phases. Remember this? Or the time you thought you should go back to your original color? Sigh. But we got through that together, didn’t we?

I figured, the next time I see Seattle Center, it will be cheerful and upbeat and back to its old tricks. But that wasn’t the case.

I once again had out-of-town visitors (including Katie and my poor, easily-corrupted cousin) and since none of them had ever visited the Space Needle, it seemed like an obvious excursion. Why? Because people LOVE you, Space Needle. And for some reason, you think that it gives you license to suck.

After waiting in line for a solid 40 minutes (part of which was in a glass corridor- I lack the ability to tell you how heinous that experience was, because the portion of my brain reserved for that sort of thing was COOKED), we finally made it!

No, not to the elevators. Of course not. We had made it to the cheesy promotional photo area! Whoo-hoo! I had been telling everyone that we needed to go all-out for our photo for the better part of our wait in line. It was, I am convinced, the only thing that held us together during the tortuous journey through the infernal glass hallway of doom. It was a promise of hope at the end of our pain, of novelty props and blue-screen backgrounds.

But when we got there, we found that the umbrella props were broken, and we quite literally had to FIGHT WITH THE FRIGGIN STAFF in order to use the other props available – mainly, a salmon and an over-sized Starbucks coffee cup. They grew incredibly impatient at our attempts to enjoy ourselves. They simply wanted us to grumble through the photo move on. Seriously? If want I want a picture of me looking miserable, I can just look at EVERY PHOTO OF ME EVER TAKEN DURING MIDDLE SCHOOL. Why not let folks have a little fun after they’ve cooked part of their brains while …

Wait, what? What’s going on? Anyway …

Now, it would seem logical that the staff would want to rush us through our picture, right? After all, there’s a huge line waiting behind us, slowly baking to death. But guess what? THERE WAS ALSO A LINE IN FRONT OF US.

That’s right. Your staff, dear Space Needle, wanted to rush us through our photo so we could HURRY UP AND WAIT IN ANOTHER LINE. I want you to take a moment to reflect on how little sense that makes.

But again, we waited, now somewhat upset at the scolding we received when attempting to find joy in your bowels, Space Needle. It was at this point, that I began to consider what exactly your hiring practices were. How does a institution like yourself amass a staff that is equal parts apathetic and hateful? You’d think the two ideas would cancel one another out, and YET THEY DIDN’T. I can only imagine the exchanges that happen in your HR department …

“This candidate apparently stabbed his application repeatedly with a ballpoint pen. Also, under last place of employment, he wrote, ‘your mom.'”

“Have him manage the gift shop.”

We eventually made it up to the top, where your employees seem slightly less hateful. Is it the lack of oxygen? Or the fear that if they really piss someone off, they might get tossed down to the bottom? Whatever the case, they seem to loathe humanity less. By comparison, it was like Christmas morning.

Of course, we were packed in with several other hundred tourists … and for what, I’m not exactly sure. $20 a person doesn’t really seem to buy that much. It’s not like you can redeem your ticket for a drink or anything. I just wish that after all the waiting and rushing to get up to the top, it wasn’t such a let down (SEE WHAT I DID THERE?).

You know what would be cool? A slide. Seriously, if you made some sort of slide that took people down to the bottom, I would TOTALLY pay $20 for that.

Where was I? Oh, yeah. We finally made it up to the top, circled around, snapped some photos, and decided to head back down.

Yeah, you heard me. THERE WAS A FRIGGIN LINE TO GET DOWN, TOO. Honestly, Space Needle, there I times when I think you are fucking with me.

And, because I’m sucker for punishment, I went to the photo kiosk in the gift shop, the scene of our last Dick Move. Why? We wanted to see our photo. Sadly, because we had to rush through it, it wasn’t nearly as awesome as I had envisioned. And for some reason, I’m grimacing. Also, the blue in my shirt was apparently the same color as the blue screen, so there are trees in my abdomen. Whatever. 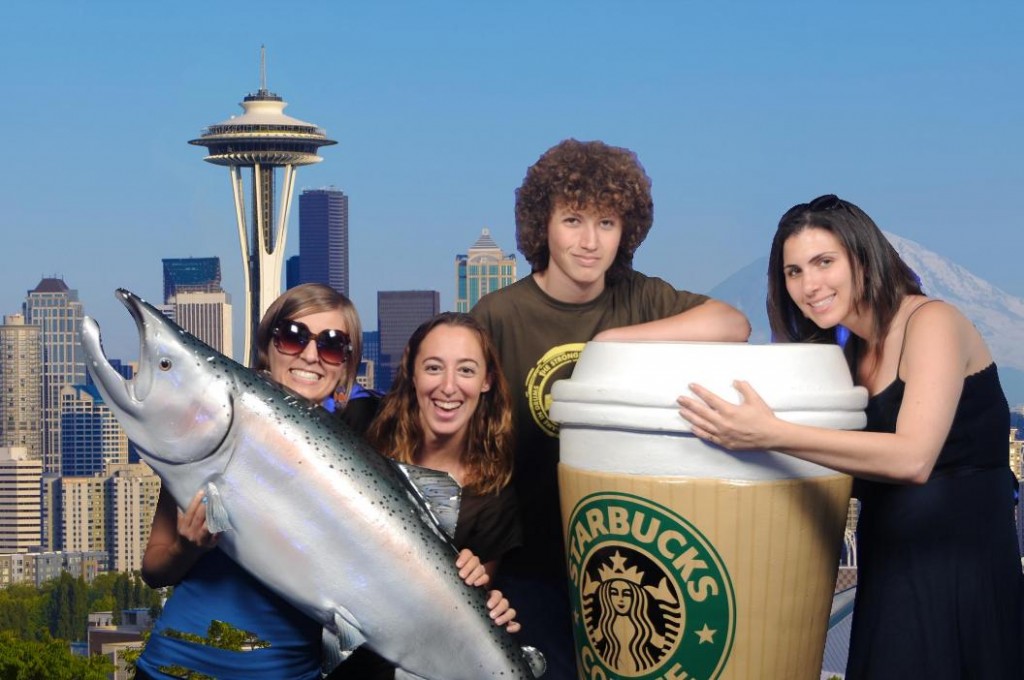 Seriously, though, how friggin suave is my cousin? Coolest fifteen year old, EVER.

On the plus side, you’ve apparently given people the option to download their photos for free, should they decide they don’t want to spend an additional $20 on a low-quality print. So we’ll list that under “Pros”.

As for the “Cons” pile … sigh. There’s a joke there. Something about how one of your cons is that all of your employees are ex-cons. Or something. I don’t know. Like I said, that part of my brain got cooked.

The point is, I’m worried about you, Space Needle. I’m scared you’re going to start drinking too much or carrying on with QWEST field and YOU KNOW WHAT I THINK OF THAT. Just promise me, if you feel you need to talk, you’ll call me. Because despite all the rough times we’ve shared as of late, we’ve had good times, too. Remember senior prom? It was freezing cold and cloudy, but you managed to make that night magical.

And when I was a kid, you were, I swear, the most amazing thing I’d ever seen.

So try to suck a little less, okay?