Skip to content
Posted in: Lost in Translation, Top Ten

I’ve started this post about four times. I kept trying to find a way to tie the topic matter to travel, and frankly, I couldn’t. It has nothing to do with travel.

Instead, this post has everything to do with me. Or, more specifically, my mom.

Since joining, she immediately friended one of my ex-boyfriends, posted half a dozen links about the existence of extra-terrestrial life, and called me every five minutes for days on end, asking me if I had seen her recent status updates and what I thought of her new profile picture.

The result is awkward, yet somehow endearing. To my mom, the internet is a new and strange place. She’s been an immigrant before, and now she’s a digital immigrant, to boot. She’s traveling in a strange new world, and only vaguely understands internet etiquette. She says things on Facebook that I wouldn’t in a million years consider posting.

And yet, there’s nothing wrong with that. Because when you explore new lands, there’s no right or wrong. It’s kind of like travel (HOLY CRAP, I AM MANAGING TO TIE THIS POST TO TRAVEL). You may not know all the customs. You may do things that other people find strange, or weird. But as long as you’re open-minded, willing to make friends, and your heart is in the right place?

Things will be just fine.

So, without further ado, some crazy/delightful ways my mom has used Facebook, and a few faux pas she’s committed.

1. Here are three posts from her in a row. Tell me if you see a pattern. 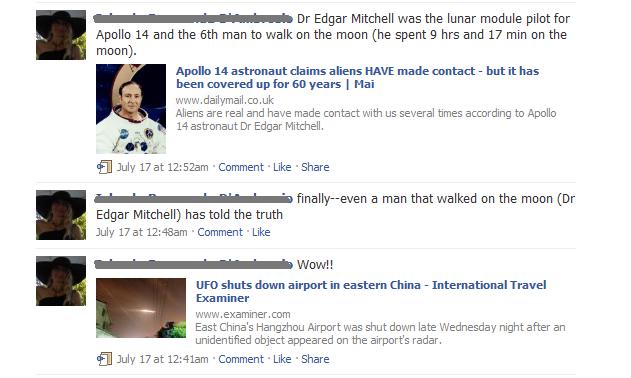 Did you find the pattern? That’s right: each post starts with a consonant.

2. Quizzes are apparently as worthwhile and legitimate as sworn testimony. My mother found out which 18th century philosopher she was, posted the results, and then proceeded to do a ton of research on said philosopher. Upon discovering that there was something she disagreed with, she immediately deleted the results of the quiz, freaked out that her friends will now think she’s bonkers, and posted roughly half-a-dozen status updates about how she really doesn’t believe in a categorical imperative. Somewhere therein? I received a frantic phone call about the incident. 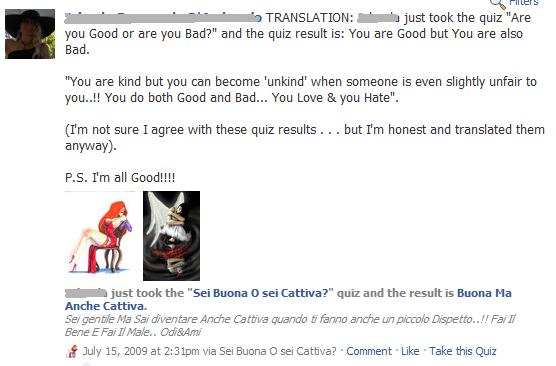 No one is going to take the results that seriously if they involve Jessica Rabbit.

3. She and my Auntie P. bicker on Facebook. I’m not gonna lie: This is pure awesome, and I occasionally have been known to egg them on. 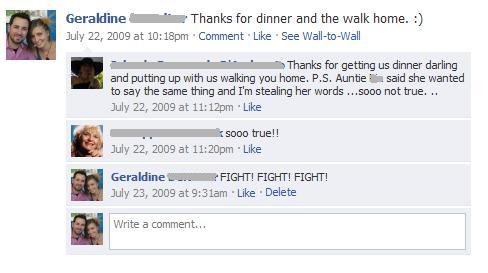 They insisted walking me home, otherwise I’d “get murdered.”

4. She takes things far too literally. So if you ask, “What’s on your mind?” as Facebook prompts people to in status updates …

5. She doesn’t realize when a phone call is better. When my brother’s cat died (he had left it with my mom a few years ago because his then-girlfriend-now-wife was allergic), my mom announced it on Facebook before telling anyone. Actually, she didn’t so much announce it as vaguely reference it (which she felt would be easier on everyone), leaving us to make our own conclusions … 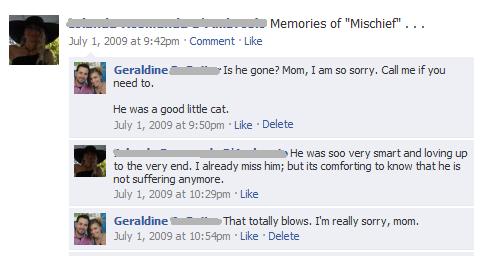 6. Movie quotes? Yeah, she ain’t gonna catch those. Still, it’s pretty cute how encouraging she is, given that out-of-context, my brother sounds nuts..

If you can immediately guess the movie, then you are a bigger dork than I.

7. Sometimes, she makes sense. These are the scariest moments of all. 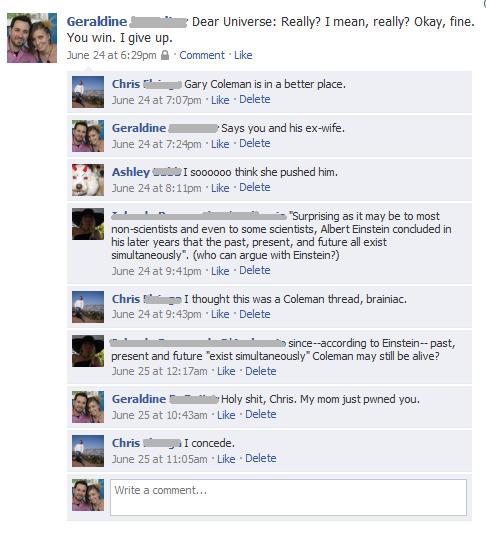 You wish your mom was this awesome.

8. She makes up emoticons. I have no idea what this means:

I think this is a chicken being urinated on. 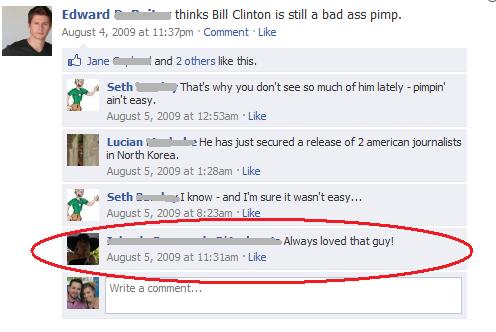 But still, I kind of love her for stuff like this.

10. She takes a stand against the most random things. Don Quixote has his windmills. My mom has sidewalks.

Don’t get her started on the douchey crosswalk.

Crazy, right? And yet, so damn delightful. A lot like my mom, actually. After all, I might complain or tease or poke fun, but honestly, if she used Facebook like everyone else did? I’d be miserably bored. Remember that next time you’re traveling, and are fairly sure the Italians (or the French, or the Germans, or whoever … but mostly the Italians) are nuts. If we were all the same, it would be so damn dull.

Plus, I’m sure if I looked hard enough, I might find something inappropriate that I had said on Facebook …

Okay, fine. I didn’t have to look hard at all.

Wow. I’m kind of an asshole.