If there’s one thing I understand, it’s being in a funk.

Recently, several of my friends have found themselves in funks, for varying and legitimate reasons. And consequently, it put me in a bit of a funk (did you know that funks are contagious? Bet they didn’t teach you that in sex ed. Stupid middle school health teacher).

One of my friends is moving to Baltimore for graduate school (I’m resisting the temptation to watch The Wire, which I’ve never seen, because I know that after doing so I will want to lock her in my bathroom for fear that something bad will happen to her). I hate it when people leave Seattle. It’s silly – I’m hardly ever in this town, but I strive to keep a high concentration of people I love in just a few places. I like to tuck them safely away, and then, like so many other things in my life, I start to take them for granted.

Until one day, they tell me they’re leaving.

And suddenly I think of all the hours spent in front of my computer instead of in their company (ahem). I think about the birthdays I missed, the parties at which I didn’t show up, the phone calls I forgot to return.

And I feel like a heel. Hence, the funk.

It seems that the times I see a person the most are just when they’re about to leave town. Suddenly I rush to make up for lost time, to squeeze every ounce of life out of our interactions.

Because sometimes squeezing the life out of things is good. Especially when you’re in the company of friends. And so, what could have been a dreary, sad, “We can’t believe you’re leaving!” dinner, turned into a magical afternoon. Because what we failed to realize, when we sat down at a cute little Thai restaurant in the Fremont neighborhood of Seattle last Saturday, was that we had given ourselves first-row seats to the Fremont Zombie walk …

It’s funny, because I spend a lot of time thinking about zombies. I mean, a lot of time. They’re my number one fictional fear. I think about zombie escape plans, and I realize that Rand and I need to work on ours. I keep my gas tank at least half-full at all times. I realize I will need to buy more non-perishable food items. These are things that occupy my mind. I realize it’s not rational or logical, but still, I think about them.

So you can imagine how I shocked I was to discover that nothing – nothing – will pull you out of a funk like a Zombie Apocalypse. 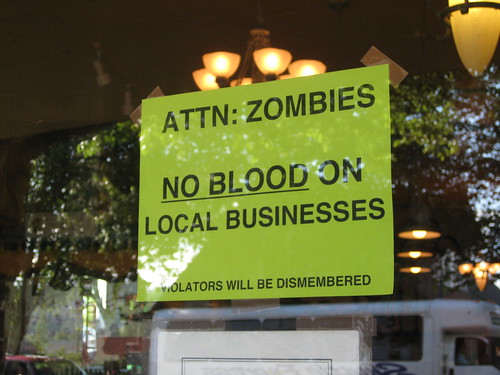 We were adequately warned. As in all zombie apocalypses, there was a cryptic sign of what was to come.

Things started off quite calmly. I think that’s why it was so much fun – we really only expected to see a few passing zombies here and there. 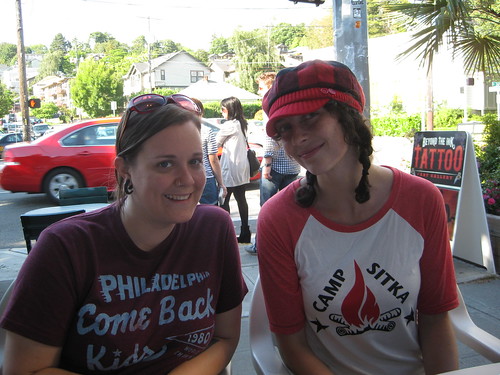 Chrissy and Skye, expecting nothing. 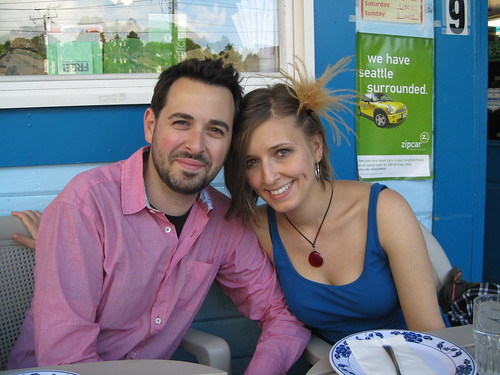 Notice the sign behind me that reads "We have Seattle surrounded." This is what we call "foreshadowing."

Then we realized something was stirring. The first people to go past were a couple of guys in HazMat suits. They told us not to worry – everything was under control. 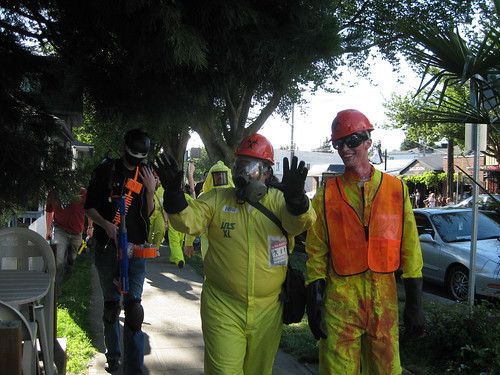 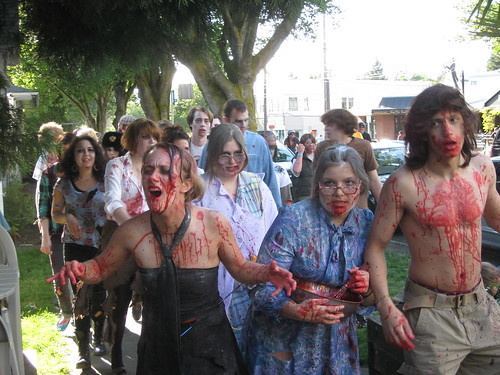 A lovely day for a slurping, stumbling stroll. 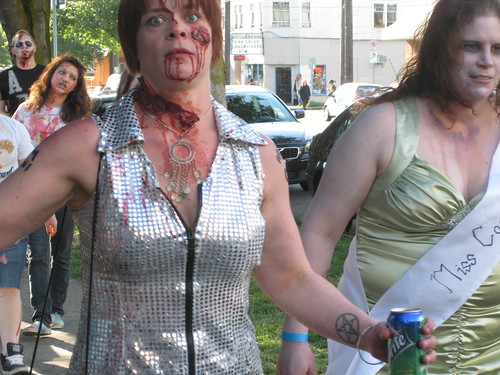 The undead apparently prefer the un-cola. 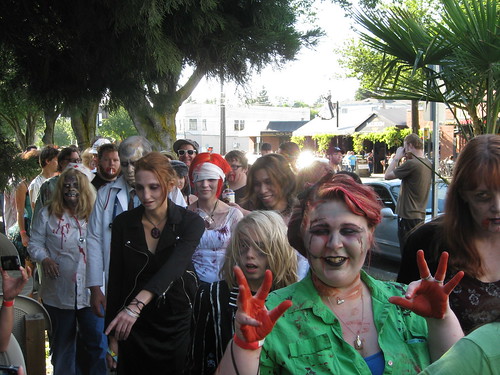 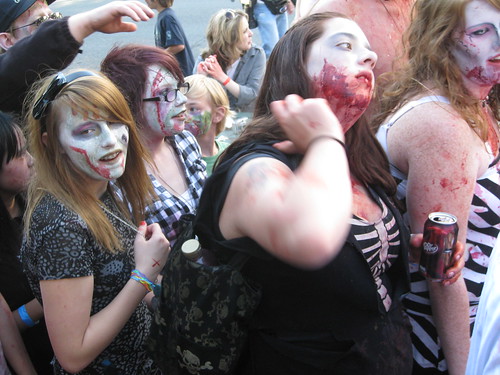 Though in all fairness, some of them might have just been goth.

Keep in mind, we were having dinner, outside, at a lovely little Thai restaurant. We hadn’t exactly expected this when we sat down. It was kind of a little gross, actually. Hysterical, but gross. 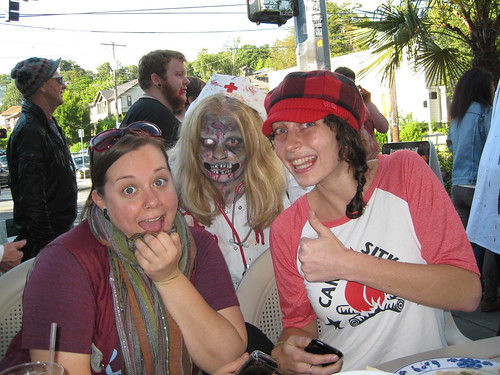 Chrissy and Skye were totally good sports about it, though.

We were in kind of a vulnerable position. I can’t tell you how many people stopped by to nibble on my dinner companions. Then again, they are adorable. It kind of makes sense. 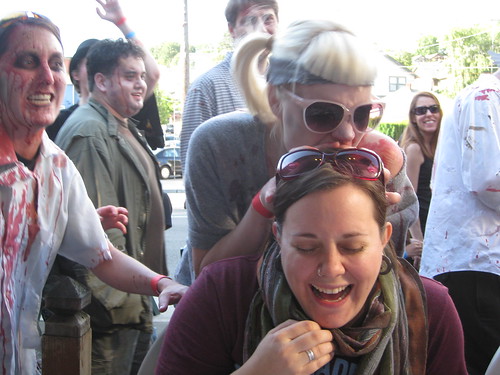 They're coming to get you Barbara ... I mean Chrissy. 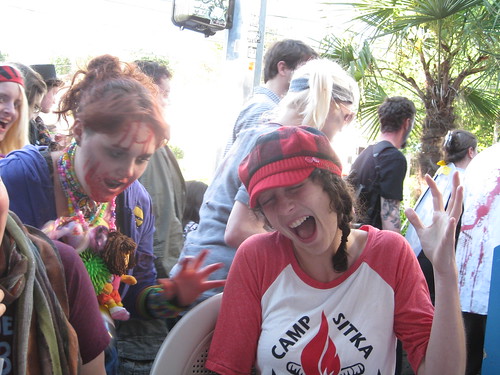 Skye was screaming because she hates ravers.

And the costumes we saw were downright brilliant. Not simply zombies, but zombies with a backstory. 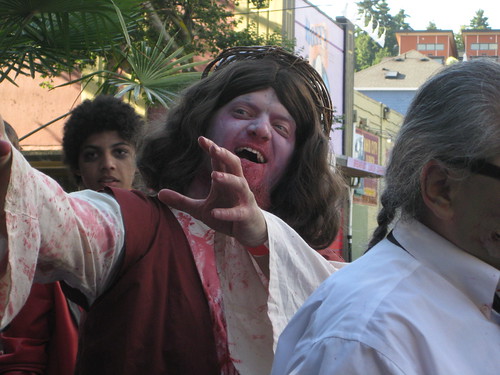 This was one of about three zombie Jesuses (Jesii?) that we saw that day. 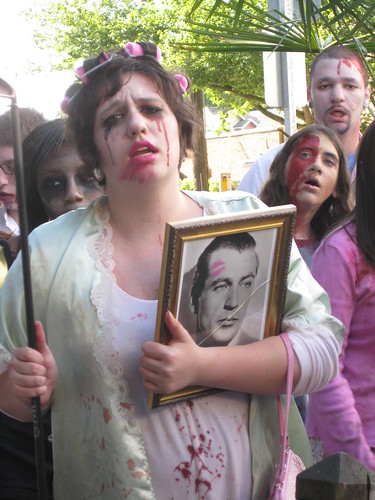 This girl was my favorite. I wanted to ask her what the backstory was, but she was so perfectly in character ... 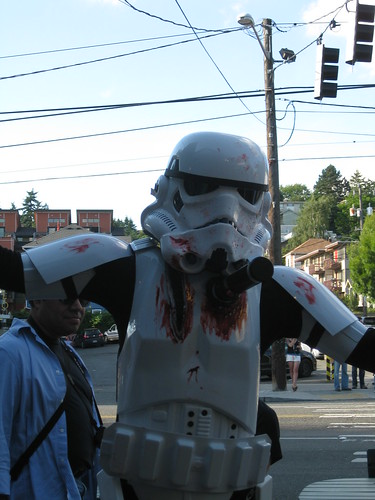 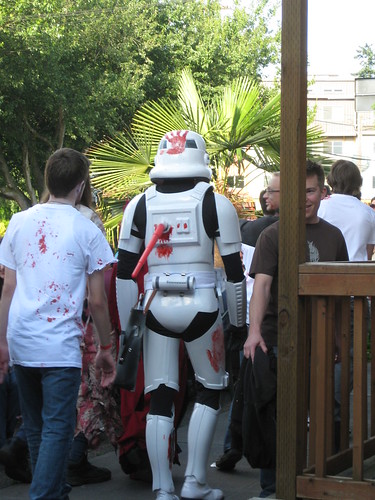 I know, I know - a lightsaber wouldn't stick in his chest. It would slice right through him and cauterize the wounds along the way, so there'd be no blood. Whatever. It's still funny. 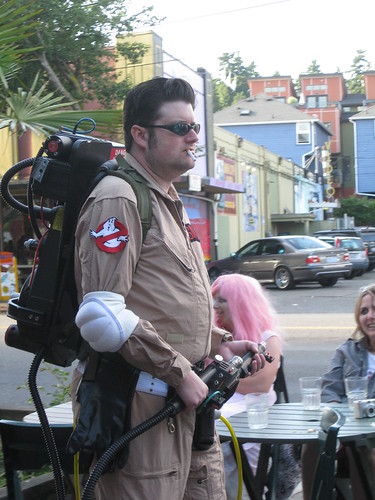 Finally, help arrived. But do zombies count as ghosts?

And damn, some of these folks pushed the envelope. You can see the rest of the photos in my Zombie Apocalypse photo set, but I’ve chosen not to include some of the more heinous ones here. I heard that the guy who organized the walk occasionally gets criticized for glamorizing violence, but I don’t know if I agree with that assessment. It just seemed like a bunch of people dressing up and having fun. We actually saw a lot of families, and people who looked delighted to be spending time together. 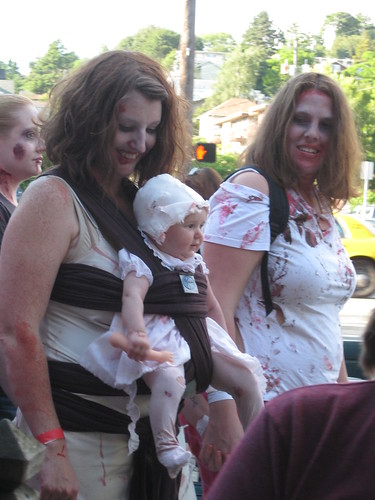 One of my favorite photos of the bunch. 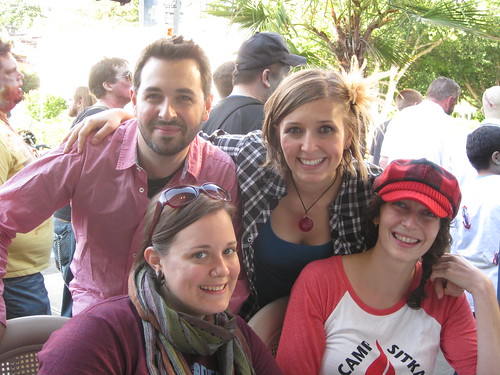 I counted us among those enjoying each other's company. 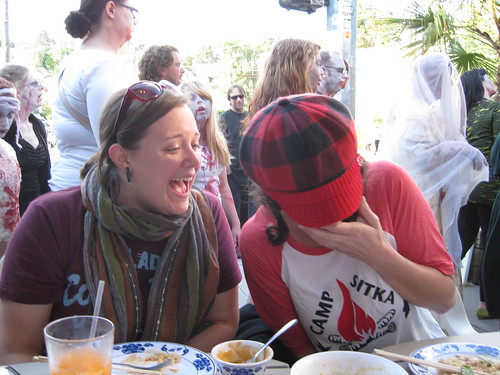 Sometimes all you can do during the zombie apocalypse is laugh.