The Fourth of July just passed, and as my husband and I stood watching fireworks with a couple of friends, I got to thinking a bit too heavily about what it means to be an American.

No, I wasn’t drunk. Nor had I ingested any sort of chemical that would cause me to wax poetic over my own cultural identity. But when you’re surrounded by folks who’s grandparents or parents or great-grandparents hail from vastly different places, it’s a strange and interesting thing to think that we all fit under the same big star-spangled umbrella. It’s a warm and happy thought, actually (provided you don’t think about the plight of Native Americans. Then, the warm and happy feeling dissipates pretty quickly and wonder if heading to the casino will assuage your guilt. It won’t).

My thoughts were made more complex when I asked my husband why he considered me “Italian.” For the record, I don’t, nor have I ever, described myself this way. I generally say, “My family’s Italian” (when I’m not saying, simply, “My family’s nuts.”) But I describe myself as an American. I was born here. I grew up here. And yet Rand will, on ocassion, say, “My wife is Italian.”

I asked him why he did this. And to him, with his Jewish-American parents and grandparents, my upbringing was foreign. We spoke mostly Italian (though my mother and brother and I didn’t speak it generally amongst ourselves, when any other family members were around, it was almost exclusively Italian). On weekends and during the summer we ate a big meal with my grandparents at around 2pm. It was pasta. Nearly every single day without question, pasta. 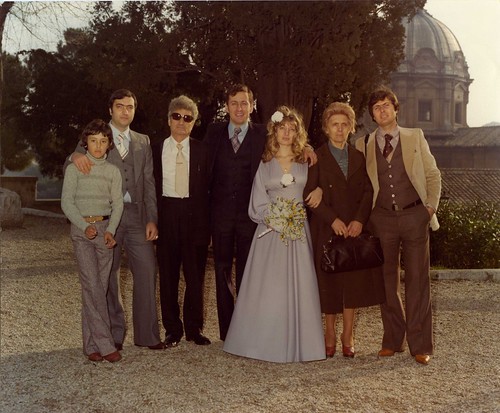 My parents on their wedding day, along with my mom's family, in Rome. Notice my nonno never took off his shades.

Nevertheless, I don’t think it was an Italian upbringing. Nor do I think it was Italian-American (that is a different animal all together, and one more foreign to me than most things I’ve encountered). I think, instead, it was an immigrant upbringing. Rand’s logic in calling me Italian isn’t entirely accurate, but it does reflect a key element of his thinking: that my upbringing was not a stereotypically American one.

And yet, and yet, and yet. When I think about all my friends – my undisputedly born-and-raised-in-the-United-States friends, I realize that many of them had upbringings similar to mine. Though they weren’t Italian, they were the children of immigrants, nevertheless. They spoke Korean or Spanish or Norwegian in their homes. Their parents didn’t have American accents (and some spoke little to no English at home). They had Vegemite or kimchee or other “strange” food items in their homes that needed to be purchased at specialty shops. The only difference for me was that pasta and tomatoes are sold at the regular grocery store.

Our relatives were all from somewhere, and it wasn’t here. We were bonded together by our diversity, our shared sense of being “the other.”

When I went to Italy, this realization hit me stronger than ever. I sat with my cousin’s friends, watching shooting stars on an August night over their village. A few of them chatted, casually mentioning their parents or other relatives whom everyone else knew. For many of them, their parents had been friends. Their grandparents had known each other. Their families had been in the same village for hundreds of years.

And I realized: they were all Italian. Every single one of them. I mean, it’s obvious, I’m sure – but imagine hanging out with a group of your friends, and having them all be the same ethnicity. It’s such a rare thing to come by in the United States, that the thought of it just sounds bizarre. But more than that, it was so strange that were Italian and lived in Italy. There was no sense of being an immigrant or foreign or different. Not sense of moving some place.

It was so weird.

Every American I know is American and something else. That’s what it means to be American, really. And so, getting back to my family …

My mom is Italian. Despite her American citizenship and American children and having lived here for 30 years, there’s never been any doubt of this in my mind. She’s loud and neurotic and can’t wait in line to save her life. People note her unidentifiable accent and ask her where she’s from, to which she proudly replies, “Rome.” 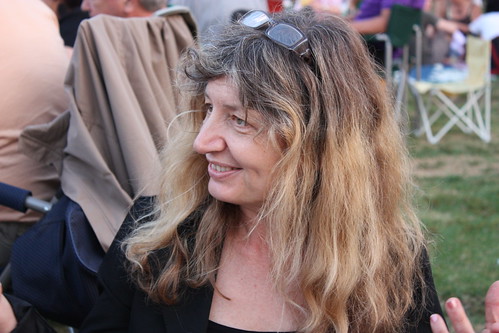 Many words come to mind when I think of my mom. "American" is not one of them.

A few years ago, my mother and I spent two weeks in Italy. It was the first time in years that mom and I had traveled together alone, and the first time she’d been back to Italy in ages. We were at her brother’s home, and my little cousin graciously brought my mom a cappuccino in a large Starbucks mug decorated with the Seattle skyline.

“Zia,” he said, “Because you’re American, you get the cup from America.”

My mother sat, speechless for a few moments. Finally, she spoke.

“After years of Americans calling me Italian, an Italian just called me American.”

And all I could think was, “Well, of course.”