Many years ago, I was friends with a girl who, despite being abrasive and a bit mean, had a wonderful way of explaining things. She was telling me why she felt that she could never be friends with any of her ex-boyfriends.

“At some point, I will look at him and think: Hee-hee. I saw your penis.”

The idea that they had seen each other naked meant that, no matter how mature they were, and how long passed their relationship was, they could not be friends. Not really. And it wasn’t all that sad, either. It was kind of funny.

And if that theory holds true – that we can never be friends with anyone who’s seen us naked, then performance artist Marina Abramovic must live a lonely life. Because over the course of her career, many, many people have seen her naked. Last week, her most recent exhibit – “The Artist is Present,” a retrospective of all her past performances – ended at the MOMA. Marina was in attendance nearly everyday, performing throughout. She sat, motionless and silent, for hours on end. The chair opposite her was vacant, and museum guests were invited to sit down with her. 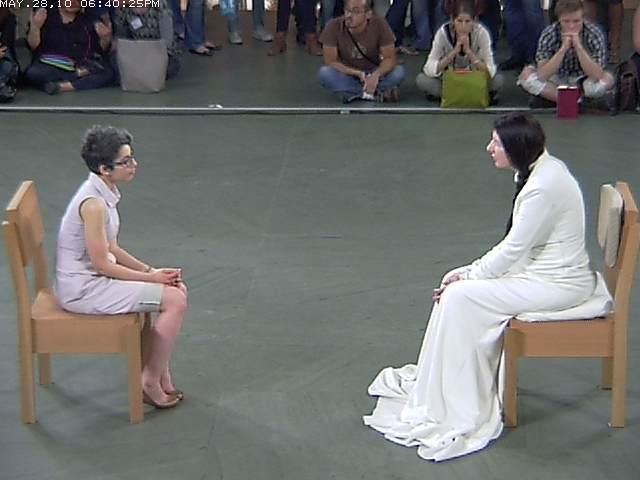 In this instance, Abramovic was fully clothed. But many of the dozens of artists helping to recreate some of her greatest works, both solo and collaborative, were not.

One hundred-percent naked. Right in the middle of a museum in Manhattan. Tee-hee.

And truth be told? It wasn’t that strange. I mean, I would never perform in the nude in a million years. And if I knew that a friend of mine was performing in some sort of naked retrospective … well, I’d admire their chutzpah and all. And I’d support them. But I’d politely take a rain check.

But Marina Abramovic is not my friend. And neither were any of the performers at the MOMA. So it wasn’t that weird. Actually, I kind of found the whole thing compelling. The New York Times didn’t quite agree. The reviewer felt that Abramovic’s attempts to recreate her past performance pieces failed; they had lost the impact they had when she first performed them.

You see one girl lying naked underneath a skeleton, you’ve seen them all, I guess.

But up until that visit to the MOMA, I had never seen a girl lying naked underneath a skeleton. Perhaps because it was my first time seeing such a thing, it held my attention (though I wonder if I should ever reach a point in my life where that scene will be commonplace. And unless I move to Tribeca, I’m going with “no”.) And the gravitas of much of her old work helped erase any urgings to giggle.

One piece, a table full of objects (ranging from a revolver and bullets to fruit and cotton balls) was a recreation of one present in one of her earlier performance. Abramovic had sat naked on a chair, and asked the audience to use the objects on the table on her, so to speak. She was cut, poked, and fed. One visitor loaded a bullet in the gun, placed it in Abramovic’s hand, and held it up to her forehead. Fights broke out between patrons trying to defend her from others who were trying to attack her.

I suppose it’s easy to understand why they didn’t have a performer re-enacting that piece.

Other performers were situated around the museum, having been trained by Abramovic to do the same things she had done (in her case, with partner and collaborator Frank Uwe Laysiepen): one pair, a man and a woman, sat back-to-back, their long hair braided woven together in a braid. Another pair wore all black and stood facing one another and pointing, perfectly motionless (their fingers were only a few inches apart). And two performers stood naked, facing one-another, perhaps a foot apart. There were motionless and expressionless as museum attendees were invited to carefully walk between them. 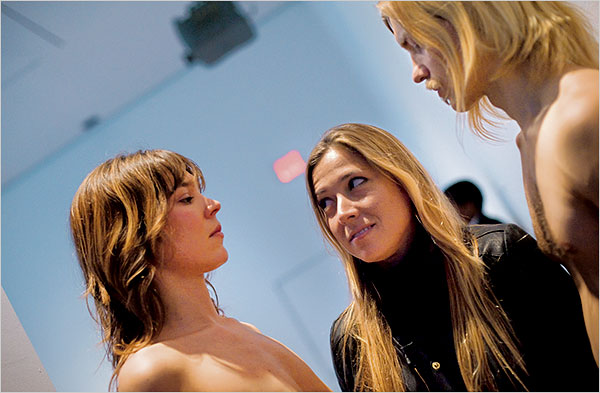 Image courtesy of The New York Times. Used without permission because they never answer my letters.

Of course, not everyone kept it together. One 30-year-member of the museum was forever banned after groping one of the naked performers. If only he had merely snorted. Another woman grabbed the fingers of the two performers who were pointing at one another. Though she was drunk and meant to do so jovially, it came across, at least to the artists, as rather hostile.

When I went to the museum, the two performers creating the “naked human hallway” (my name for it – not theirs) were both women. They stood, motionless, staring at one another.

“You can go through,” the security guard told me.

The thought had literally not crossed my mind. In fact, I had resolved to do exactly the opposite before arriving at the museum.

There is no way. I had thought to myself. There is no way in hell I am walking between two naked people standing in the middle of the museum.

I would think, by now, I’d know myself better. I’d know that the instant I’ve decided against something, I’ll do just the opposite. But apparently I don’t have a clue. Because I gathered my bag close to me, and I snuck right in-between those two gals, barely giving it a second thought.

And I didn’t even giggle.