While Rand and I were in San Francisco, we actually had a day (gasp – yes, a whole day!) where he wasn’t glued to his computer, working on projects of which I have a dull glimmer of understanding. We asked a friend (and SF resident) how we should spend the day, and since we’ve already done Alcatraz and a handful of other touristy sites, he suggested Sausalito.

Naturally, we were both sold: Rand, because he loves having time off to explore new things, and I, because I love chocolate chunk anything.

I will tell you now: Sausalito is sorely lacking in the cookie department. It is clearly a case of false advertising (I should have expected this, given that there were no Mint Milanos in Milan). Still, it was a pleasant day trip from SF.

Sausalito is located in Marin county and is not, as I had previously assumed (in what could only be described as a drunken haze) some sort of island. I would like to take a brief moment to once again reiterate that geography is kryptonite to my Batman (and come to think of it, I’m not so great with analogies, either). It’s a short ferry ride from downtown, and catching the boat is quite an awesome experience, as it meant we were some of the few people in the San Francisco Ferry terminal who were actually going somewhere.

Plus, the ferry terminal itself is pretty lovely. 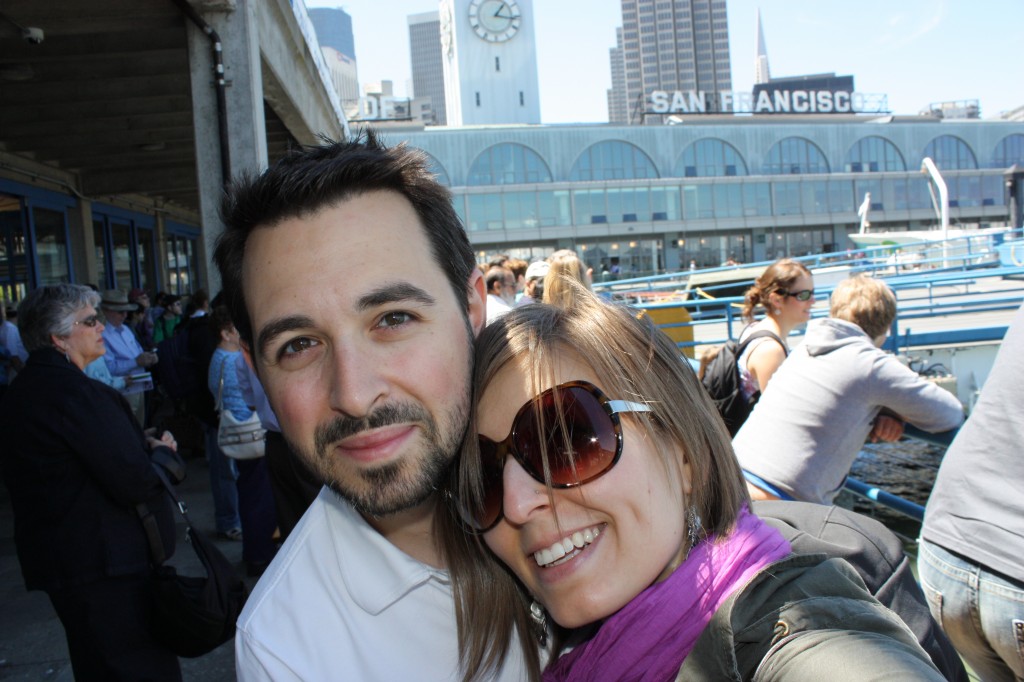 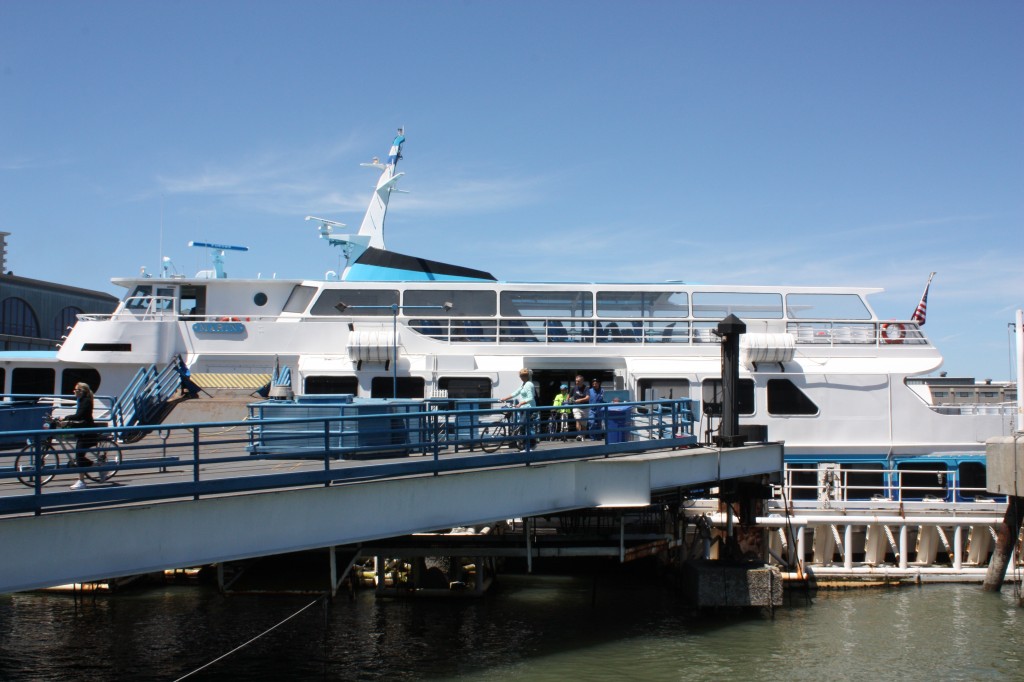 The ferry runs fairly often (about once every hour to hour-and-a-half), and adult ticket fares are only about $16 roundtrip. It’s well worth it, given the views. Be warned that it is just a passenger ferry, so there won’t be any tour guides telling you what anything is (this resulted in a lot of people pointing out the Bay Bridge to their fellow travelers and identifying it as the Golden Gate Bridge – despite the fact that the two are drastically different in color). On the plus side, you don’t have to groan through annoying jokes, nor do you have to tip anyone! 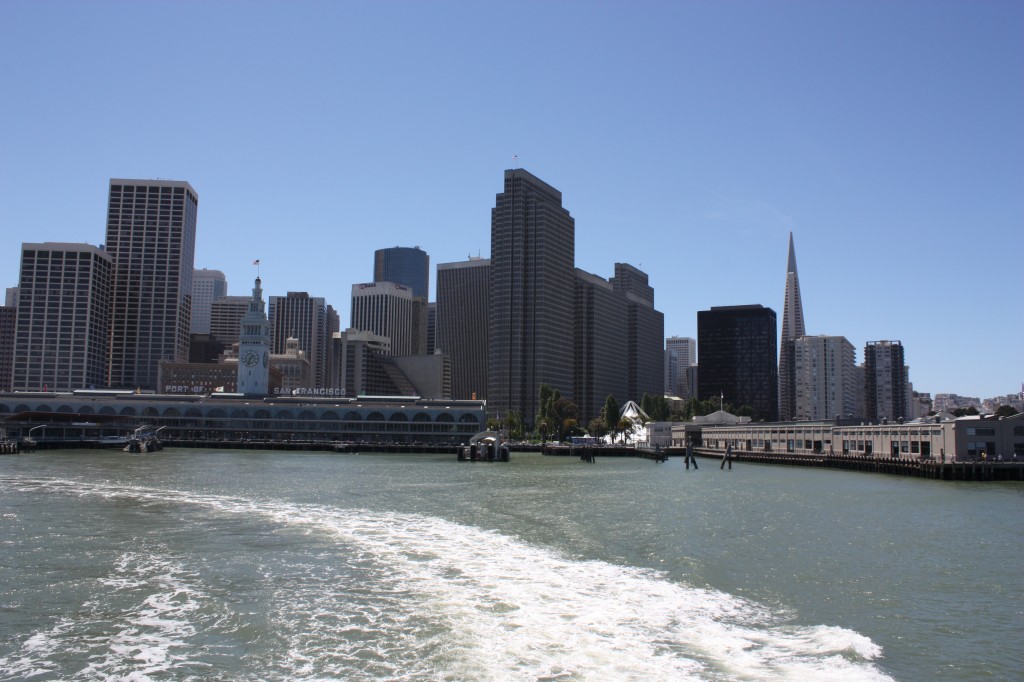 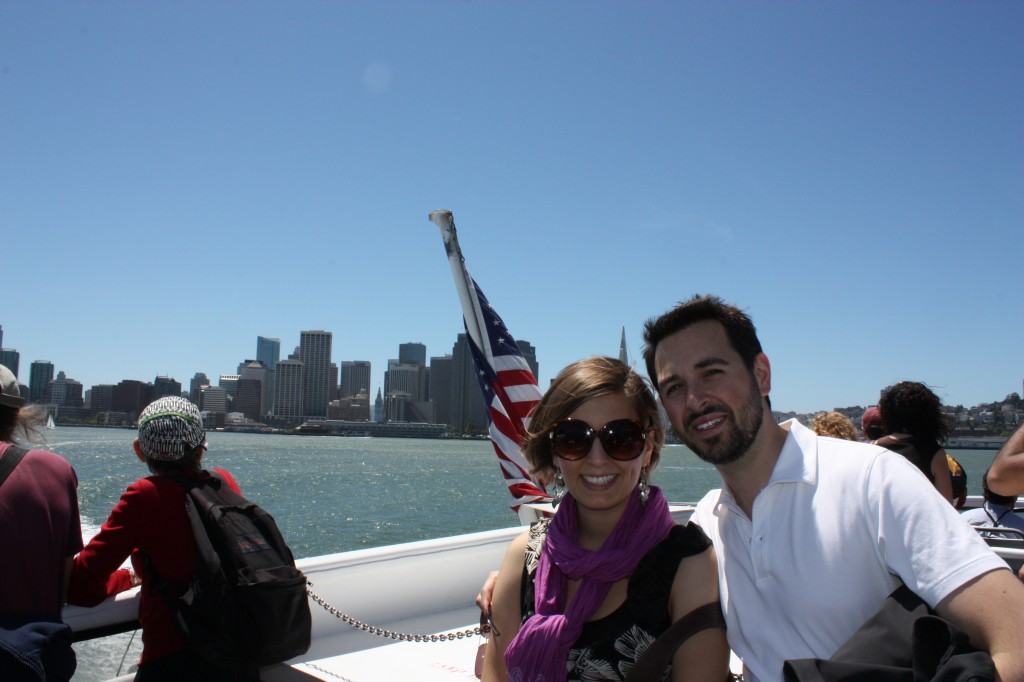 We force some German tourist to take our photo. 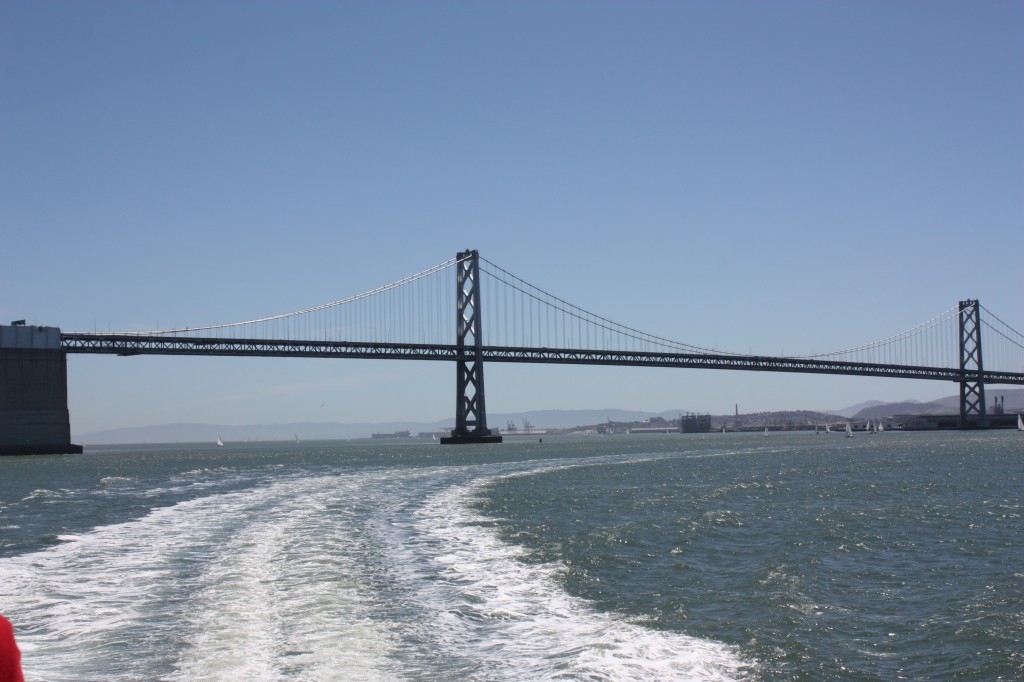 NOT the Golden Gate Bridge. 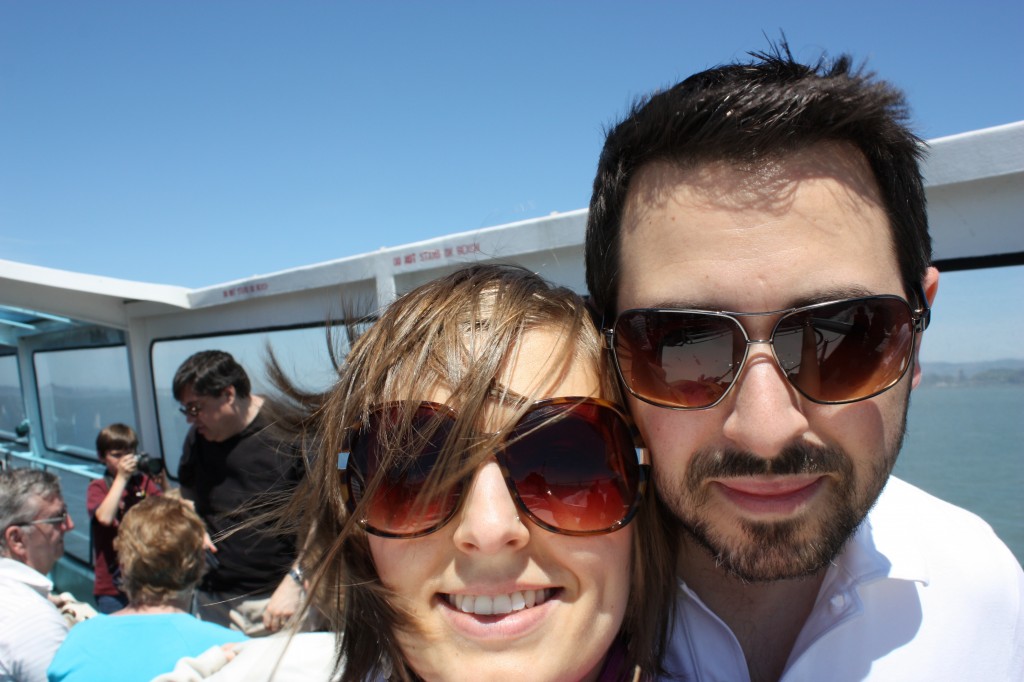 Dork Love II: Still Geeking after all these years. 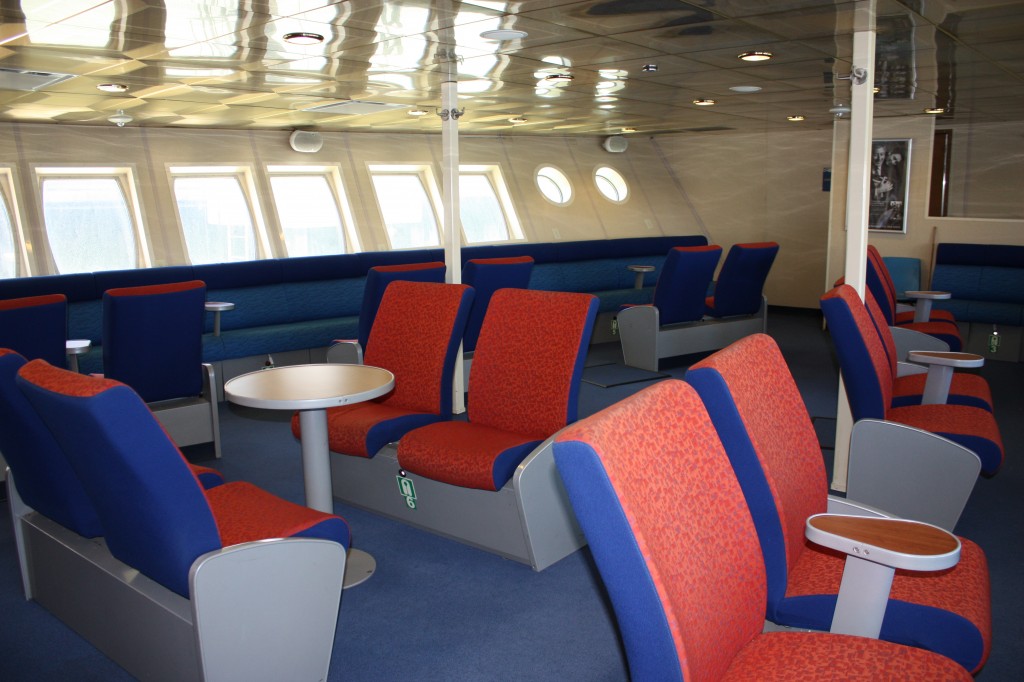 Because everyone rides on the top deck of the ferry, the lower deck has been perfectly preserved in its original 1978 state.

The ride to Sausalito takes one-half hour. Many of the seats on the upper deck don’t have shade, but usually there are a few empty covered seats, and Rand and I opted for those, since, as Seattlites, sunshine frightens and weakens us. Once we arrived at the island of Sausalito we noted that it was a lot hotter than San Francisco – a good 10 to 15 degrees. Boo.

Immediately after getting off the ferry, we spotted a nice gentleman who was balancing rocks in some crazy configurations. He was incredibly friendly, and when I tipped him a dollar, he insisted on giving me a postcard. I liked him very much. After a bit of research, I found out his name is Bill Dan, and he is known as a “rock balancer” (which would be so awesome to have on a resume). He even has his own YouTube station. 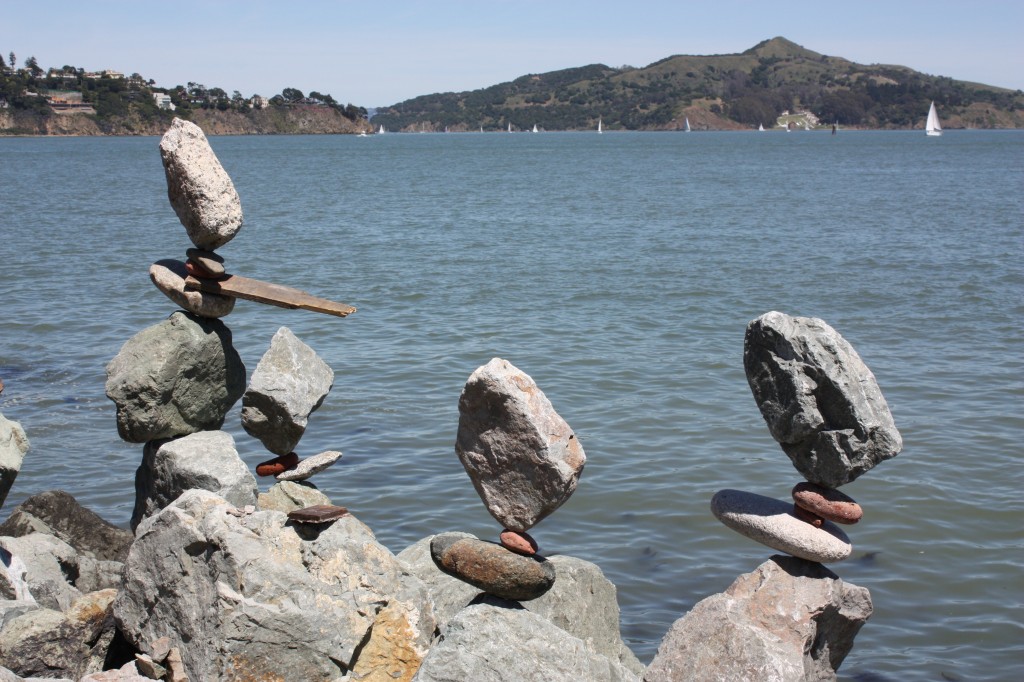 One of Bill's rock balancing sculptures. 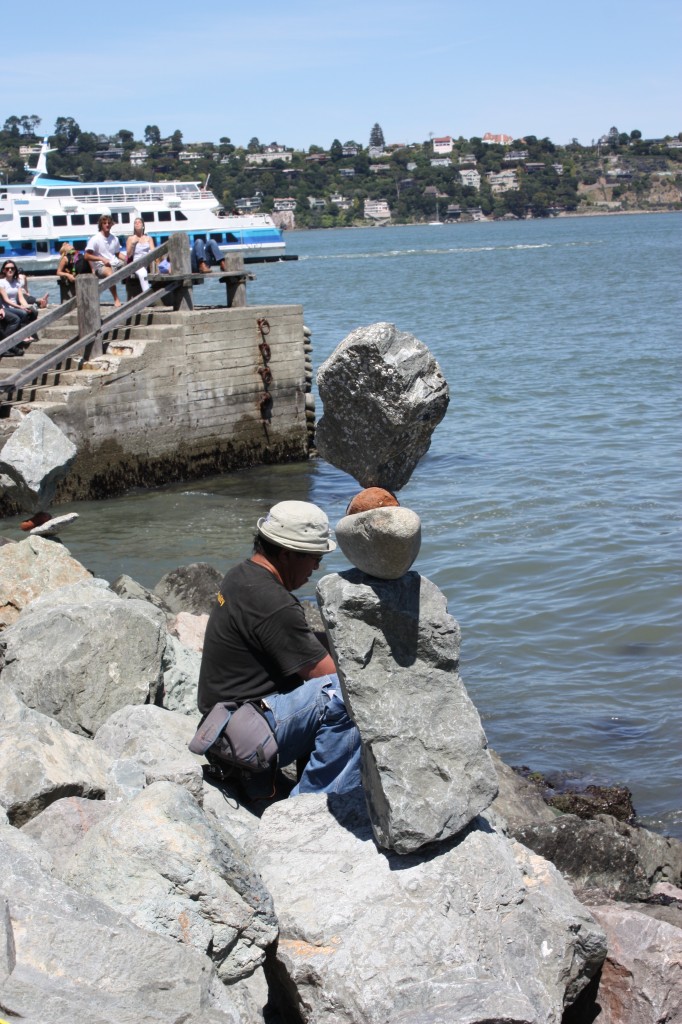 The artist at work.

The views from the Sausalito boardwalk are pretty fantastic. While it was dreadfully hot, we decided to walk up and down it for a bit. 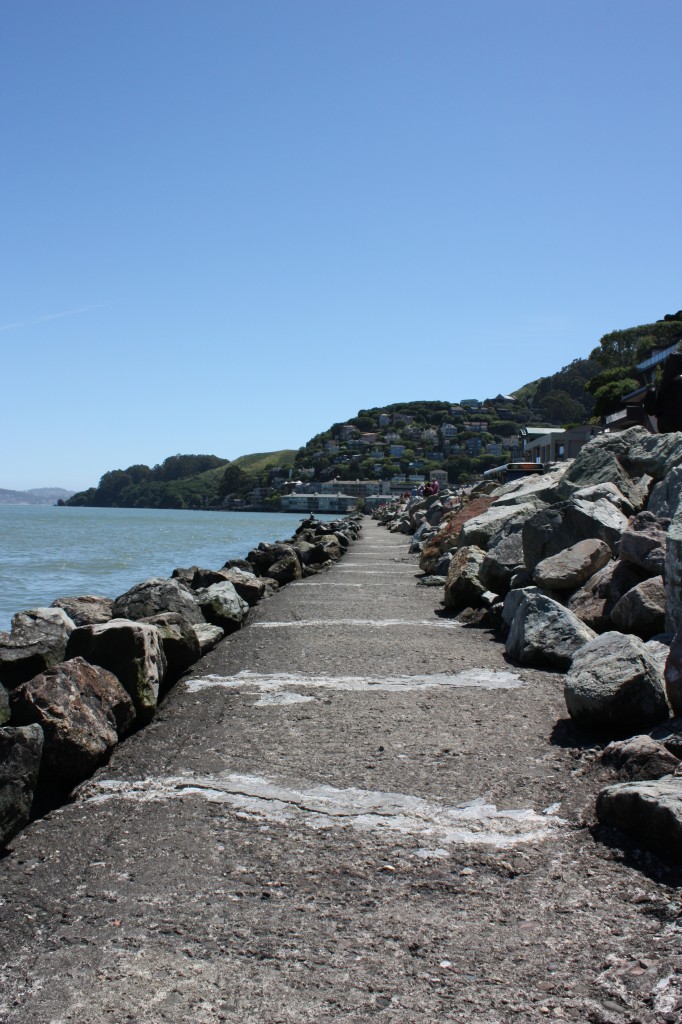 The city is just off to the left. Off to the right are embarassingly expensive houses. 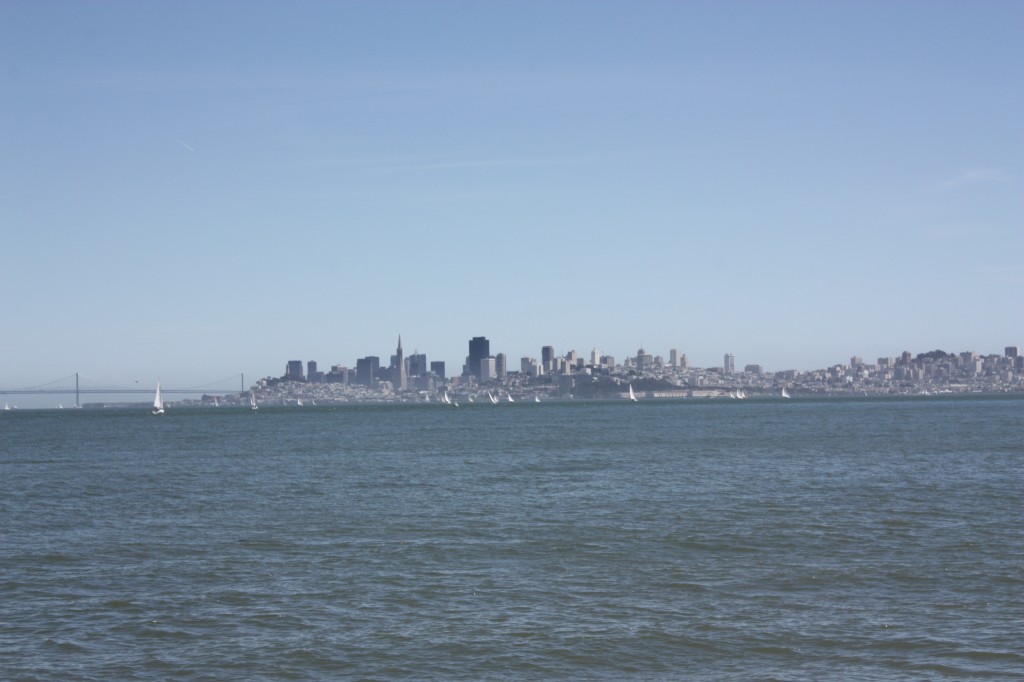 The view of San Francisco from Sausalito.

Downtown Sausalito wasn’t unpleasant, but it is incredibly touristy. There are bicyclists everywhere (I think you can rent bikes in town), kids running around with ice cream cones, and gobs of souvenir and clothing shops. Truth be told, it might have been the least interesting part of Sausalito. I wish I had more photos of the downtown area, but sadly, my computer can’t read RAW files from my camera, and I can’t presently afford the software that will enable it to do so (an amateur problem, to be sure). The thing is, you aren’t really missing much. Yes, it’s cute, but it’s similar to any other little touristy waterfront town. The ferry ride, boardwalk, and people watching were far more enjoyable, in my humble opinion. 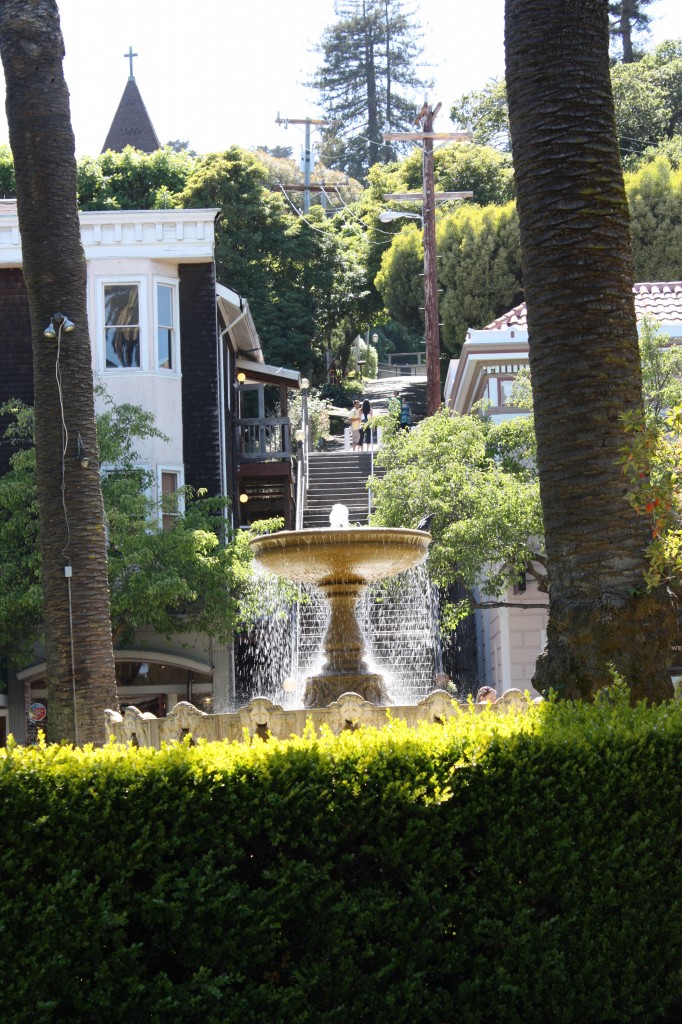 The only photo I have of downtown Sausalito (Oh, don't you start complaining).

After a few hours, we headed back to San Francisco. The ferry ride back was less crowded that the one there, but everyone was asleep. If you were so inclined, you could very easily rob someone. I chose this poor schlub: 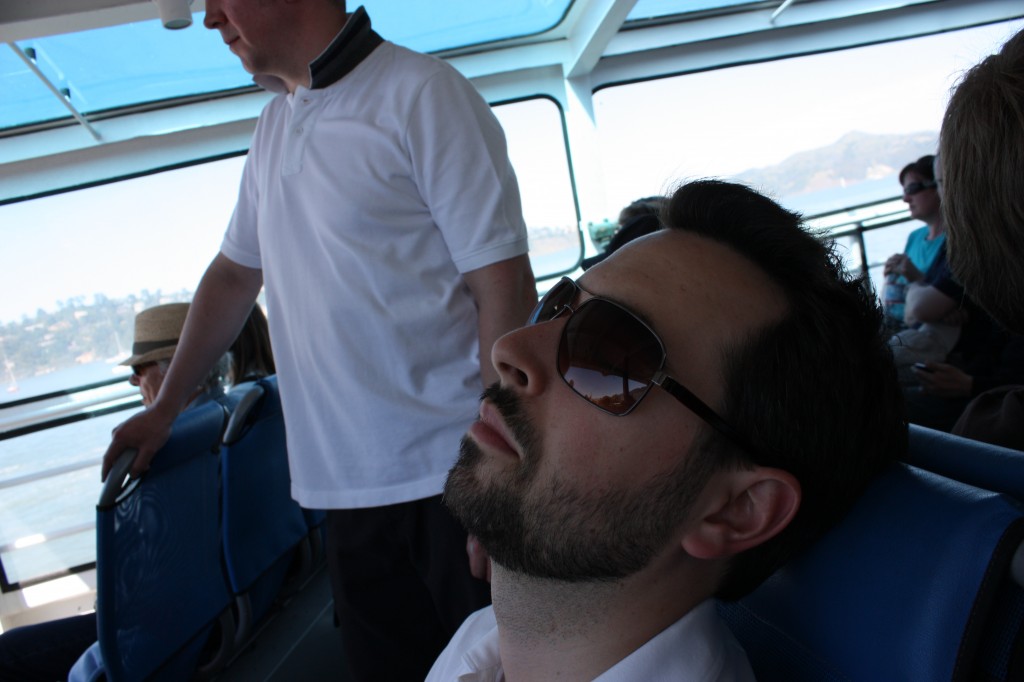 I stole his wallet. He stole my heart. I'd say we're even, since my heart is probably worth about $73, anyway.

And just like that, we were back in San Francisco: 15 degrees cooler, and many times more urine-y. If you’ve seen the other touristy spots of San Francisco and are looking for a quick day trip, Sausalito is definitely a good option (wear comfy shoes, cool clothes, and bring sunscreen). And if you’re a bike aficionado, pour yourself into some spandex and head on over: you won’t be alone. Even if the highlight of the trip turns out to be the ferry ride, that’s still not too shabby (after all, it ranked second on the Society of American Travel Writers top ferry rides in the world).