Skip to content
Posted in: City Guide, Rants and Raves

You owe me one.

Because Tin City sucks ass. And now you know, so you will never, ever have to go there. Not that you would. But if you found yourself starving near Naples, Florida, and your husband innocently said, “Hey, that place looks interesting,” you could unwittingly end up spending the better part of an afternoon there. And it would be somewhat awful.

I know. It happened to me.

As you know, from my tedious and extensive but nevertheless sporadic coverage of it, we were in Florida a few weeks back. We covered a lot of the state. A lot of it. This was mostly due to miscommunication, and the fact that my cousin, while lovely, tends to make plans without actually consulting people first. So while we landed in Ft. Lauderdale (where he lives), he thought we were landing in Orlando, so he planned a trip to Disney with the kids.

The result? We ended up driving three hours in the middle of the night through Florida. I do not recommend this. 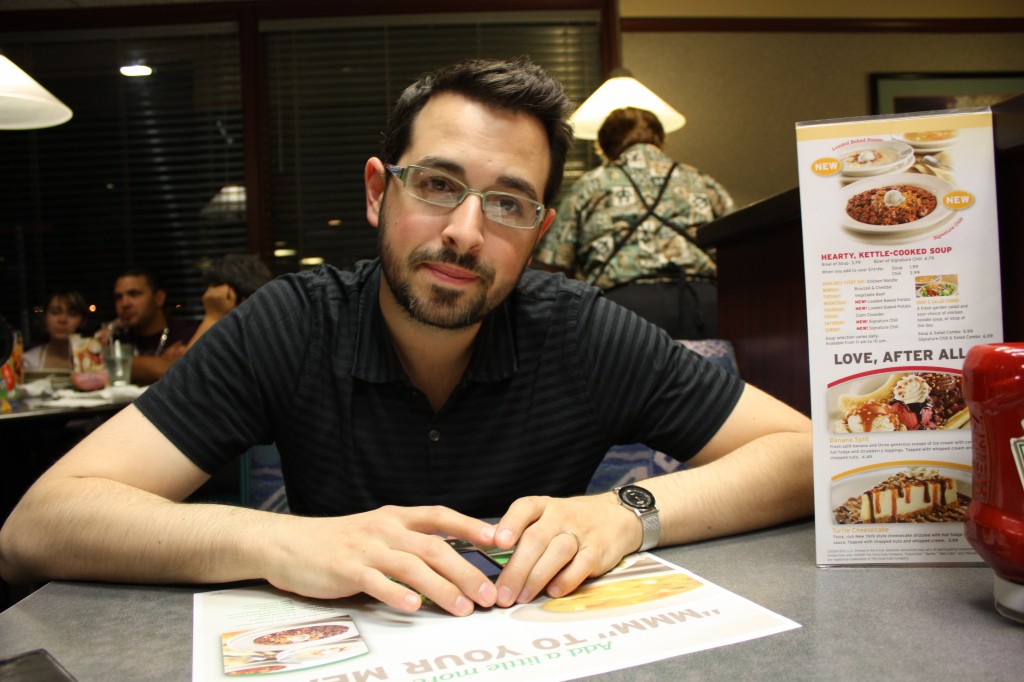 My husband at a Denny's in Plantation, Florida, at 10:45pm. He is unhappy.

After a few days in Orlando, we headed over to Tampa to see our friends Lindsay and Eric, and meet their twins. It was awesome. I love children that aren’t mine. 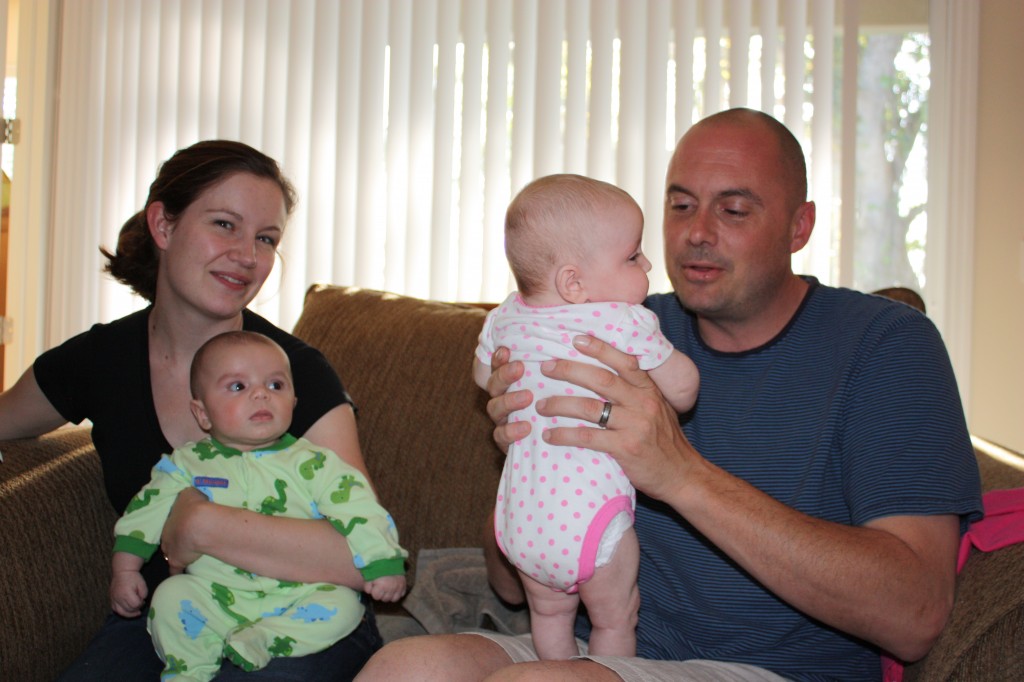 She has TWO babies. TWO. She is a goddess.

And then it was back to Ft. Lauderdale from Tampa. On the way, we stopped in Tin City, which is just outside of Naples. This was a mistake. 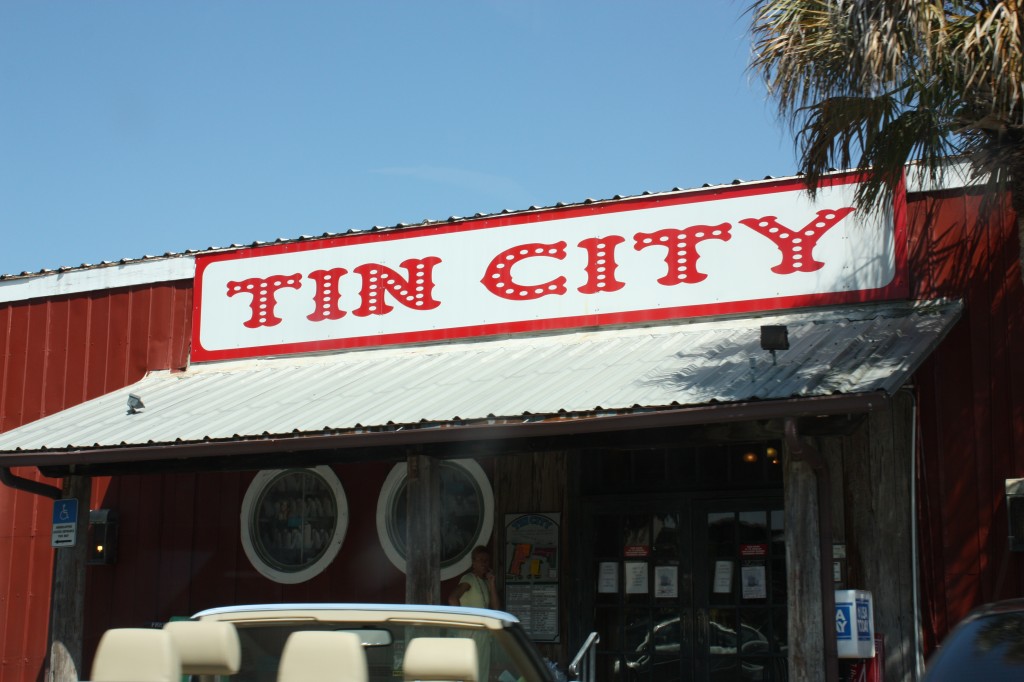 Rand's exact words were, "Take a picture of this place, so we remember never to come back."

You read more about the history of Tin City here. But as far as I understand, it was a clam-shelling and oyster processing plant back in the 1920s, and it’s now full  of shitty stores and terrible restaurants. So, I guess it was a lateral move. 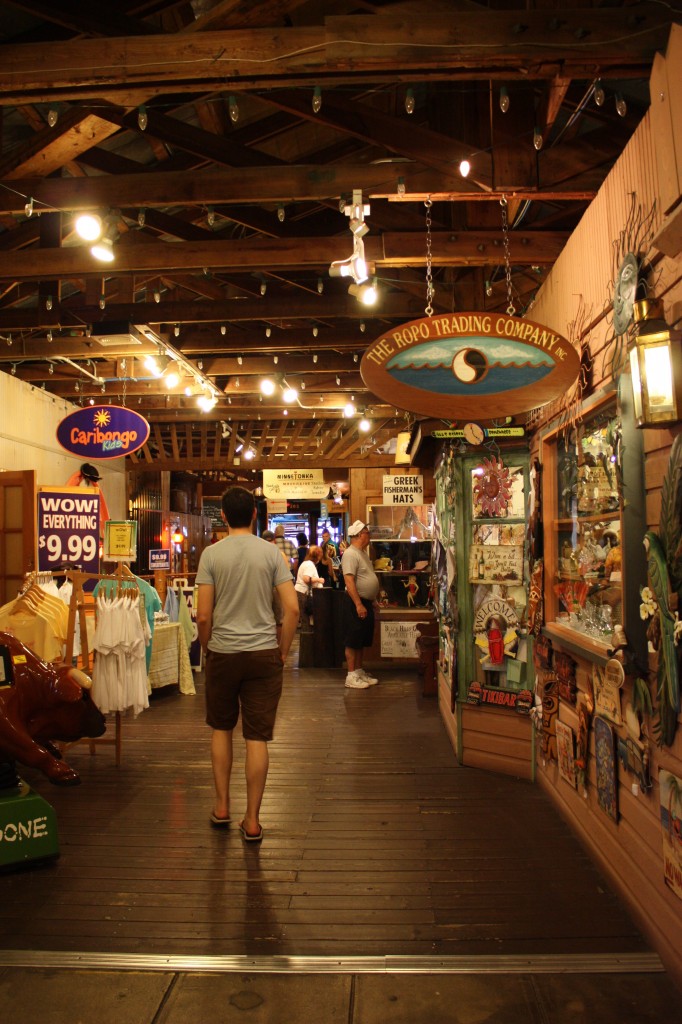 Rand doesn't like kitch. This was hell to him.

Since I felt too guilty to out-rightly take photos of some of the heinous clothing that was for sale, I surreptitiously did so. These photos do not do these garments justice. But then again, nothing short of a bonfire would. 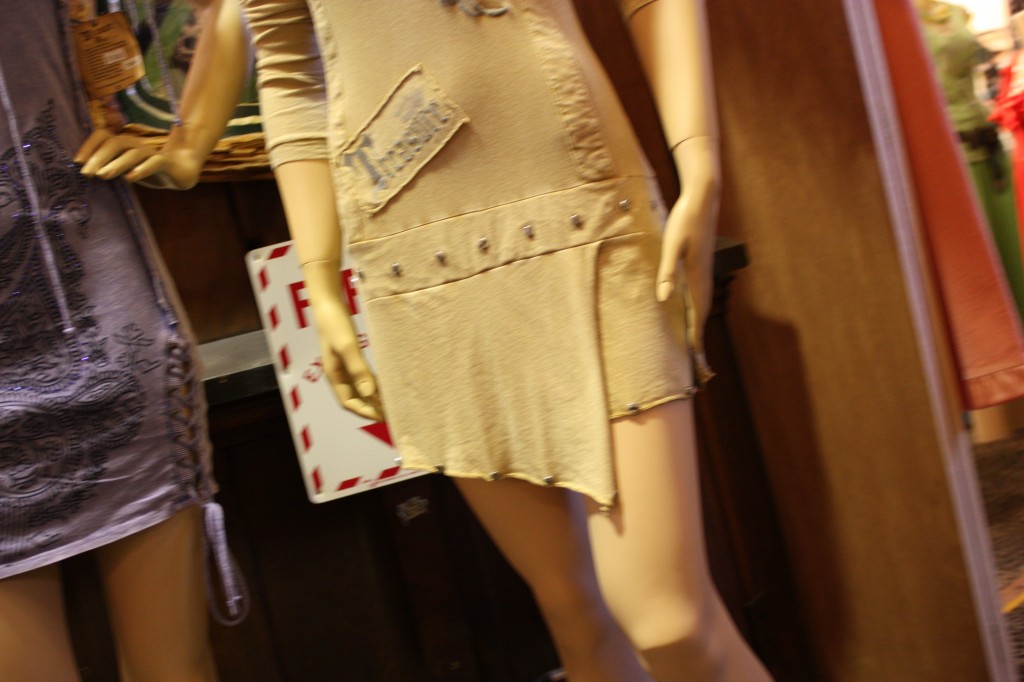 The patch of clothing on this dress says "Treasure." Which is appropriate, because it should be buried. 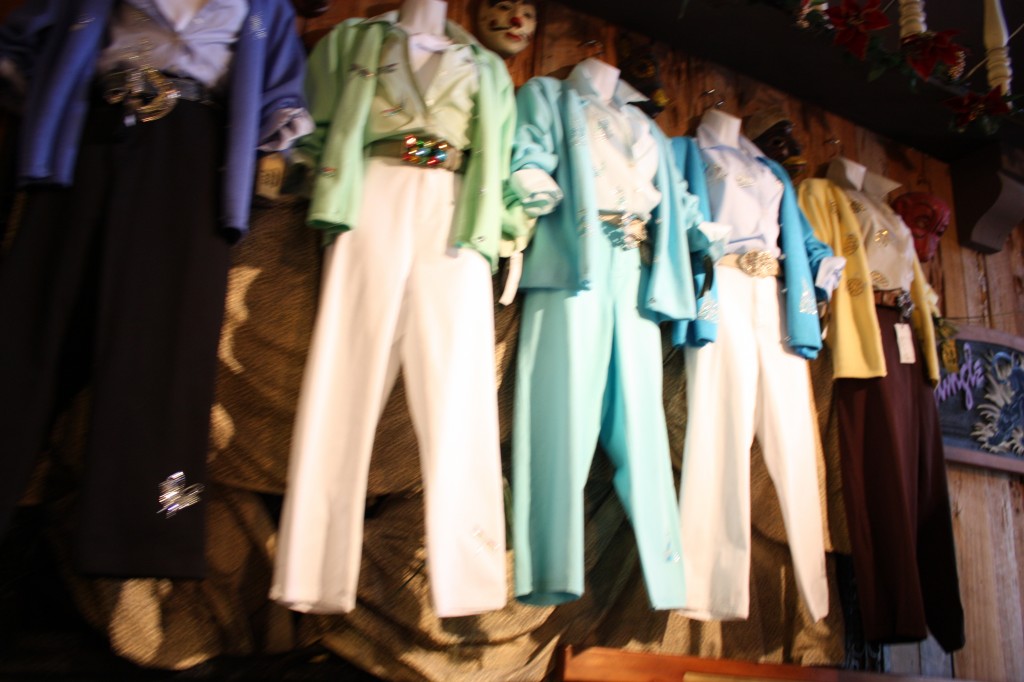 Moments after taking this picture, a woman called her friend over to see how cute these outfits were. I can only hope facetiously.

By now we were sufficiently starved. It was impossible to actually find any real food in Tin City, and several of the places we ventured into were packed and had huge wait lists. We finally found one restaurant that was able to seat us. 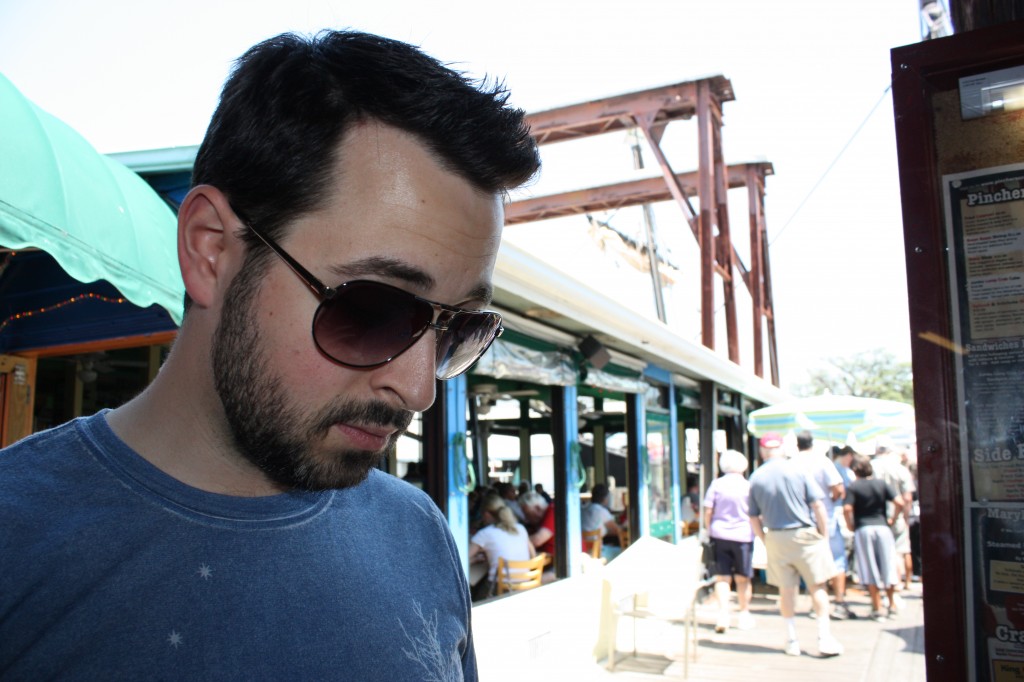 Rand attempts to look up restaurant reviews on his phone. Behind him: a line for one of the eateries. 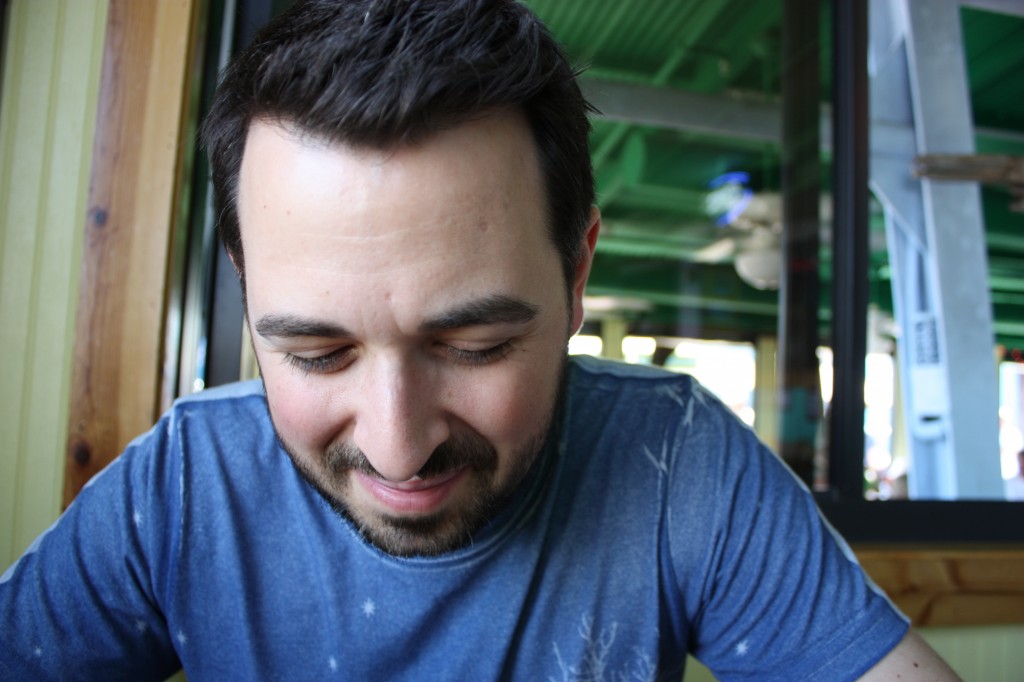 This is my hubby's half-assed attempt to put on a good face. In his defense, he usually does so with gusto.

In all fairness, the place wasn’t that bad, but it served the sort of impractical, touristy food that you’d expect, given our surroundings. We couldn’t even order a decent salad. And a quarter of the way through our over-priced meal, we realized we mis-ordered. But we were starving and the waitress was so over-burdened that if we didn’t pounce and order immediately, we weren’t eating.

In retrospect, not eating may not have been a bad thing.

At least the place was right on the water, meaning that we had a fantastic view of  this dude: 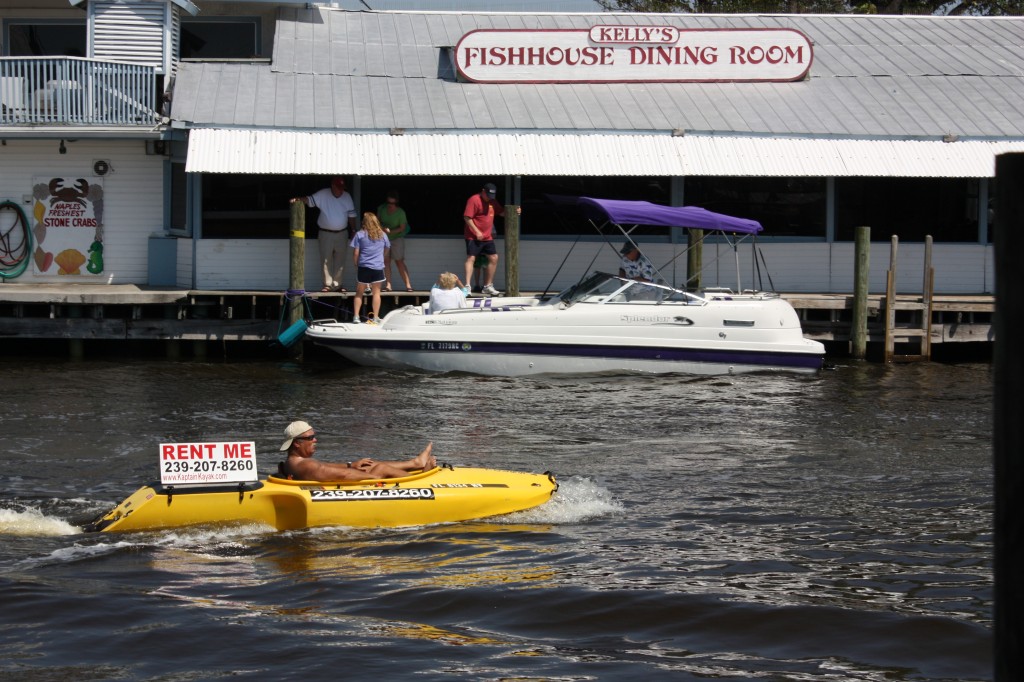 The sign on the back says, "Rent me." I'm not going to read into it any further.

We headed back to car. Throughout the afternoon, Rand had joked that we would find it empty (we’re somewhat convinced that we’re going to get robbed after a debacle in San Francisco). I told him it wouldn’t happen, and we ended up making a $20 bet on it.

I am pleased to say that I won. Tin City had merely robbed us of our time and our souls. 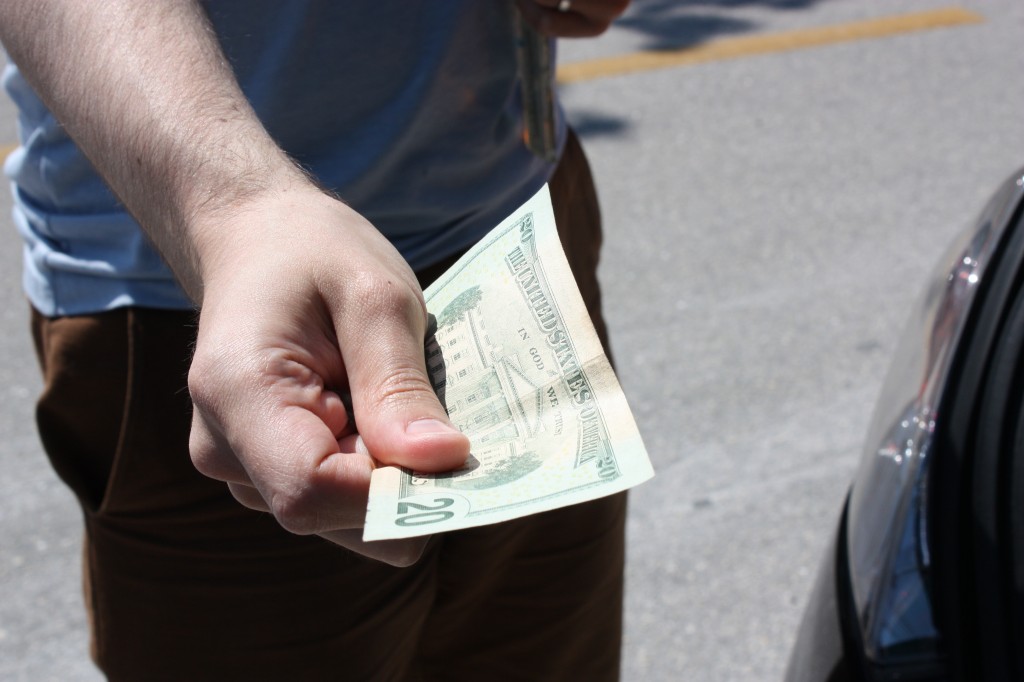 I am paid for being right. I wish this happened all the time.

And the town wasn’t through with us, yet. While it is easy to enter Tin City, it is nearly impossible to leave. All the roads out of town were blocked by one-way streets. We started to think we’d be trapped there, forced to spend the rest of our days consuming fried clams while clad in asymmetrical dresses. It was a horrifying thought. 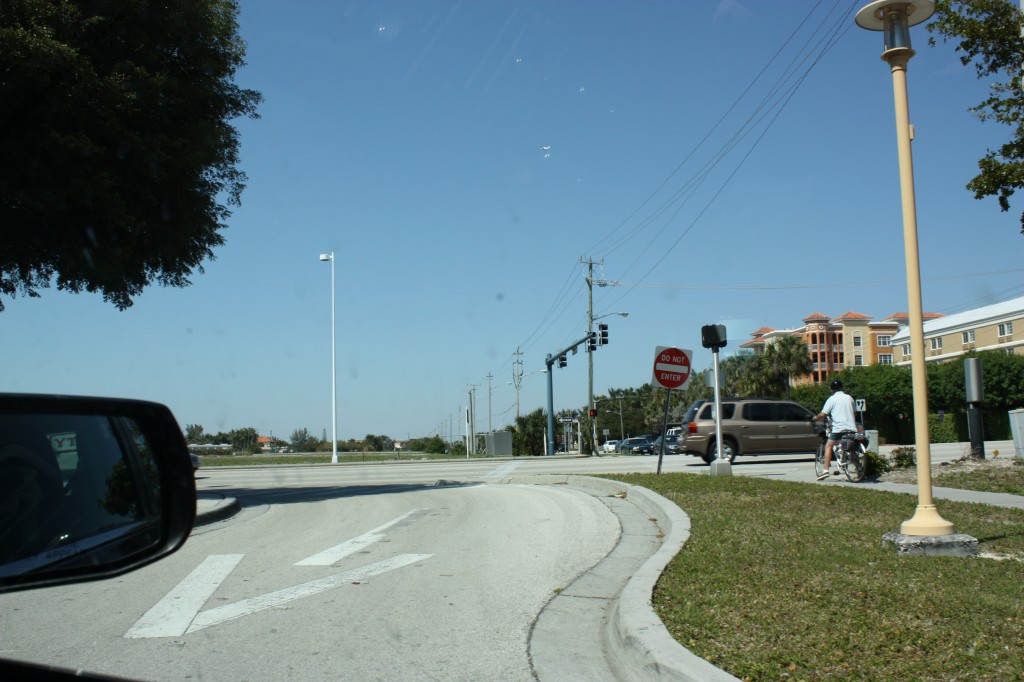 The "Do Not Enter" sign should really be on the front of Tin City.

Eventually, though, we were able to wave good-bye to Tin City … 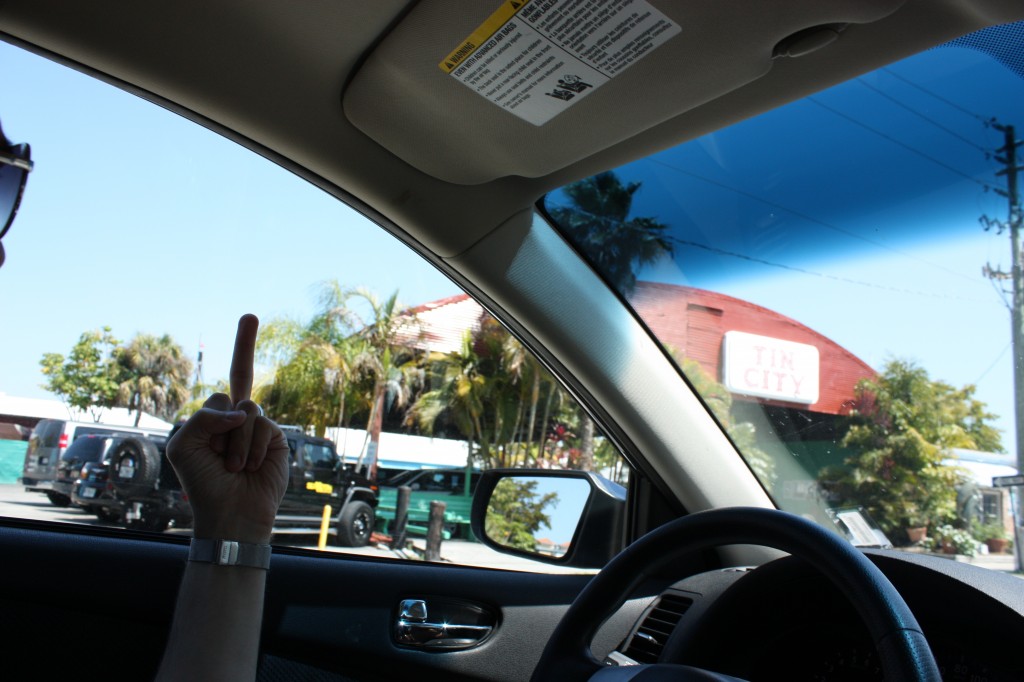 Well, he was kind of waving.

We headed out on the road again, irritated and somewhat ill-tempered. When we finally arrived in Fort Launderdale, we were cranky and once again hungry. My bad mood had many targets: I was angry at Florida, angry at traffic, and even angry at my cousin for living so damn far away. I illogically planned to walk into his house and given him an undeserved piece of my mind. But when I walked into his kitchen, I was greeted with this: 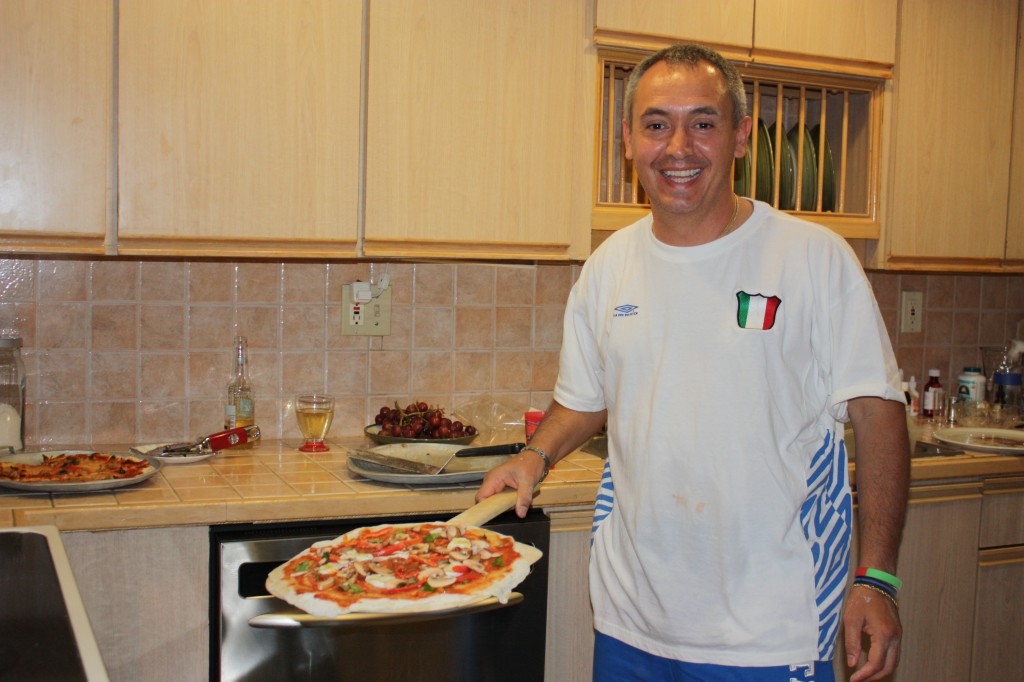 How friggin adorable is he? (Notice the head to toe Italian clothing.) 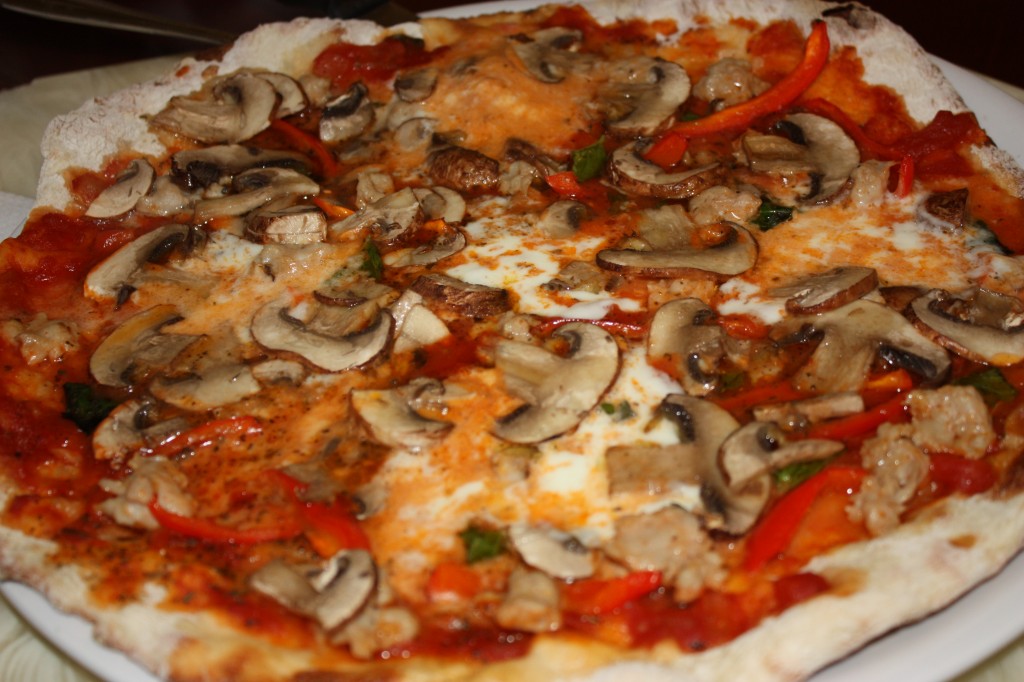 Just thinking about this makes me happy.

And suddenly driving through Tin City doesn’t seem all that bad.

But don’t you go doing it.