This week’s guest post comes from Naomi, a.k.a. The Gastrognome. Longtime readers (hi to both of you!) may remember my previous proclamations of Naomi’s awesomeness. She is a brilliant food blogger, an absolute riot, and she’s not too hard on the eyes, neither.  If the opportunity presents itself to share a meal /drink/ dirty joke with her, I strongly suggest that you take it.

All that, and she’s been awesome enough to share her tips of how to swing an awesome vacation (in this case to Cabo) while unemployed. This is definitely one to bookmark, kids: the economy kind of blows right now – employed or no, saving a little cash never hurt.

It’s also been way too long since she and I have hung out, so I’m going to turn the last bit of this intro into a guilt-trip. After all, she’s too busy galavanting around the world to call me. Or email. It’s fine. I’ll just sit here. Alone. In the dark. Waiting for her to call …

The last thing I expected to be doing with one of my first weeks after getting laid off was to spend five days lying on the beach in Cabo San Lucas, vacation destination of the rich and famous. As I took the shuttle from the airport the driver pointed out to us Martha Stewarts’ three-house complex, the condo where Angelina stayed, the house Mel Gibson owned, the list went on. Where was I and how was I going to afford this week where the closest store to my hotel was Gucci?

In my time in Cabo, I watched my money like a hawk. An unemployed girl can’t afford to be wasteful, not even on a (sort of) luxury vacation. Now that I’ve done my research and learned my lessons, I pass on to you my top five tips on how to go on a luxury vacation while unemployed.

A friend of mine had called to let me know he was booking a hotel room in Cabo on travel points and that I should join him. A quick glance at my finances would have warranted a no, but instead I cashed in the entirety of my frequent flyers for a first class seat down and back. A third friend would join us for part of the time as well, which brings me to my first tip.

1) When considering things like lodging, think about your plans 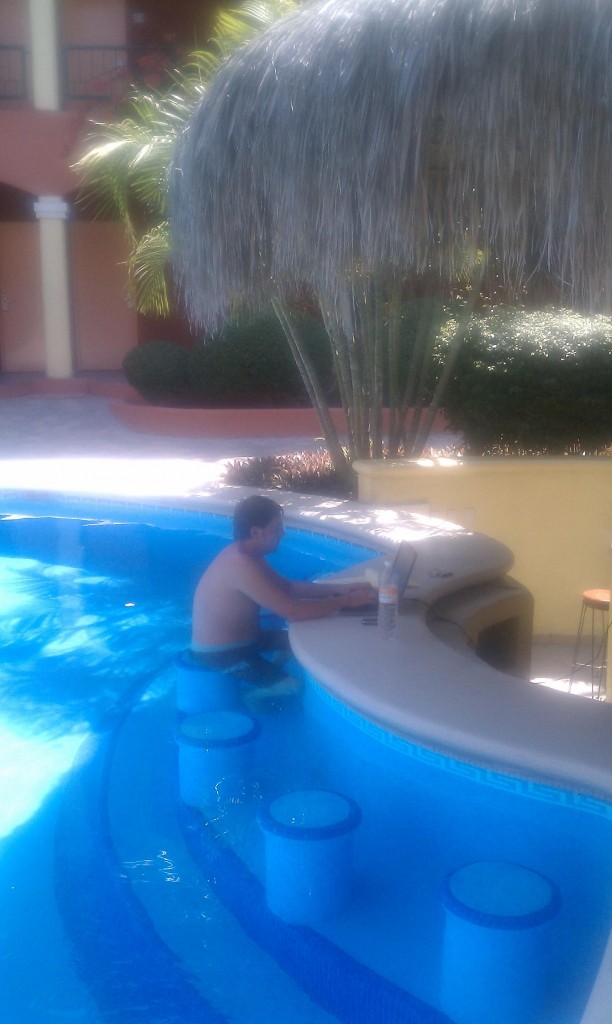 We were crammed, three people into a tiny cement box of a room for 5 days, and yet this had no negative effect on our vacation whatsoever. While the room was booked on travel points, it was a mere $60 (so $20/person) otherwise. People spend inordinate amounts of money on luxury hotel rooms here, but ours was spare. This was fine with us—we spent only about 20 waking minutes a day in the room–we were there for the beach, the sun and the fun. The hotel did have things that met our basic needs: air conditioning, free wi-fi, free breakfast and a pool with a swim up bar. It didn’t have beach-front property, though the half-mile walk to the beach just made the ocean that much more refreshing. It didn’t have cabana boys either, which was unfortunate, but there was not much else for which we could have asked.

Sometimes that walk to the beach even yielded treasures you never would have expected, like the time I found a lady selling amazing Mexican breakfast foods out of a cooler in a back parking lot of a luxury hotel while lost on my way to the beach the first day. Which is why you must remember the next tip.

Being alert can save you money, both in finding new opportunities and keeping you from getting ripped off. Yes, the advantage of staying at an all-inclusive resort is that you don’t have to pay attention. Someone will bring you that drink and they will escort you to the restroom, leaving no question unanswered. You don’t have to worry about getting ripped off or where your next meal is coming from, but a little vigilance for the budget vacationer can really pay off. The first example, above, is a happy one. I had found great, cheap food from the side of the street where few tourists are. The man eating next to me, a local worker, explained that this was real Mexican food, pointing to his food, then gesturing in disgust towards the plethora of cheesy eateries that catered to the tourist crowd. I smiled and dug into my homemade tamal. The second example is less nice. After a day of drinking on the beach, we took our bill. The prices at this bar were clearly posted all around in Pesos, the local currency. When our bill came, it was quoted in dollars and was significantly higher than it should have been. When we requested it in Pesos, it was recalculated clearly using a different exchange rate, as it was higher than our total. When we explained this, our server threw a minor hissy fit, but realized it was not worth it and eventually wandered off. In places like this, where most people come to throw away money with abandon, it pays to pay attention. Also, this brings us to point number three.

The story above already illustrated this point, but I’ll hammer it home. People come on vacation here for convenience, and changing money is inconvenient. Thus every restaurant and store will start out by quoting your price in dollars. On something as small as a $10 you could end up paying as much as $3 extra dollars because of bad exchange rates. Convenience has its costs! Think about that extra $3 over the course of 5 days worth of meals, drinks, gifts and other purchases and you’re looking at over $100 in money just thrown out the window!

There’s a place in Cabo that offers 8 peso tequila shots—about 75 cents each. This is dirt cheap, and the boys were excited to try them, so off we went. My stomach being a little delicate when it comes to throwing down cheap alcohol, I decided I wanted a beer. My beer was not 8 pesos. In fact, at five times that price, it was the most expensive beer I drank in Cabo. The deal was there to lure people in, then sell the rest of the food and beverage with scary, scary prices. By the end of the trip, though, we mastered the art of downing a few cheap tequila shots then sipping on an expensive drink from the fabulously skilled bartender, Victor, at the Monkey Bar. 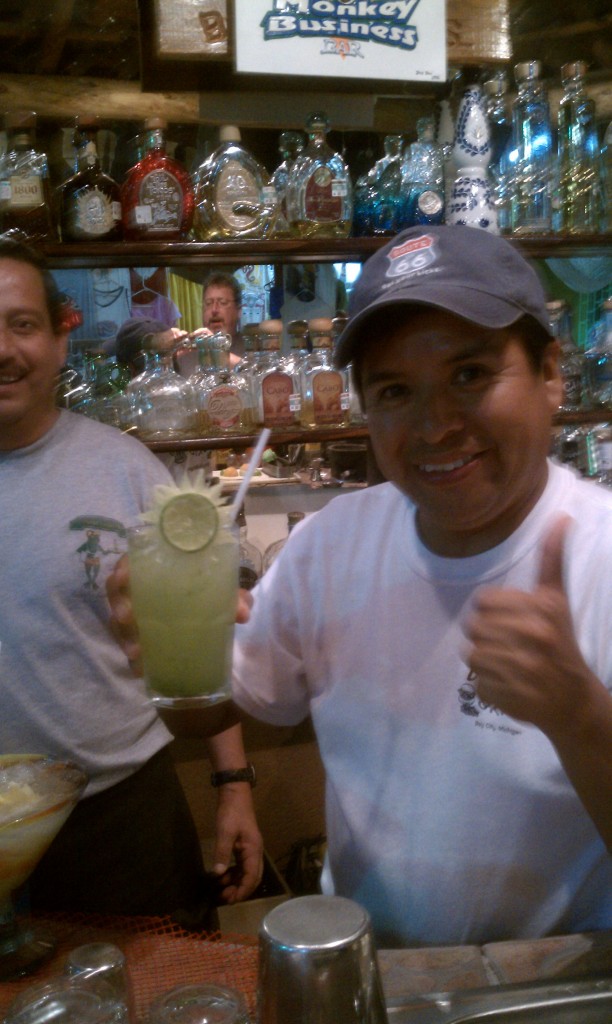 Victor shows off some of his best assets

5) Talk a walk, get away from the tourist area

When being in a tourist town gets too expensive, get out of the tourist area. All the people who work here have to live and eat somewhere, so knowing that we walked in the opposite direction of the beach in search of a bar with a TV to watch the Mexican soccer team play Ecuador. About a half mile from the beach, the scene started to change. Vinyl signs stopped advertising Italian food and tequila and were replaced by neon paper scrawled with taco and beer prices. Sanitized storefronts became ramshackle open-air restaurants and we knew we’d found our place. We returned to this area multiple times—for cheap food, cheap beer and a feeling that you might actually be in Mexico, not Los Angeles South. While here at a delicious seafood restaurant one night, we may have been caught in the crossfire of a lime fight between old friends, but lets be honest, it added to the experience, and there are worse things to be hit in the head with than lobbed limes, right?

The trip was awesome, I scrimped and saved where I could and splurged on the important things, like getting buckets of ice cold beer brought to me in a lounge chair on the beach by men in white pants and tight shirts. I wouldn’t recommend Cabo as a vacation destination to anyone looking to save money, but should you end up at any luxury tourist spot with a thin wallet, there’s no reason to let that hinder your enjoyment!

If you are, however, headed to Cabo and are interested in any restaurant recommendations or food tips, head over to my blog and check out my post on Cabo Eating.