My friend Desiree came in to town from Florida a few weeks ago, and among the many activities we packed into the few short days she was here, we planned a trip to the Seattle Space Needle. Our friend Jamie was also with us, and since she has an annual pass to the Space Needle, she was able to get us reduced tickets (and you know whether it’s the amount of fat in milk or ticket prices, I love things that are reduced). When she purchased her annual pass, she was also told that one of the perks of being a pass-holder is that you get 25% off at the Space Needle gift store. Again, discounts = awesome.

We had a lovely time at the top of the Space Needle with Desiree. If you’re visiting Seattle, I strongly suggest you go … 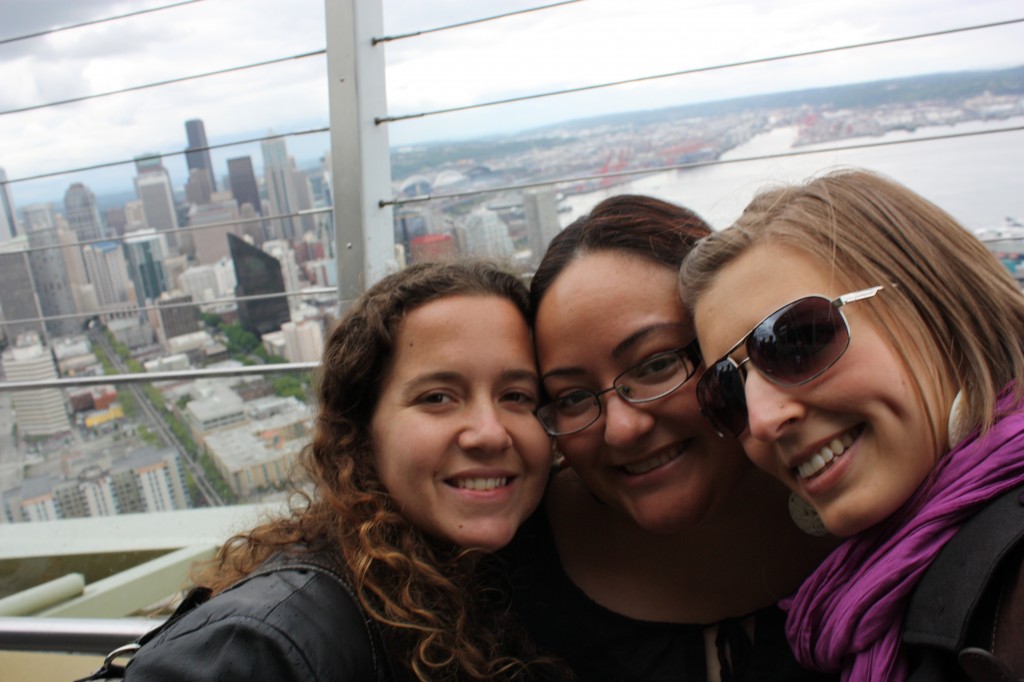 I am starting to perfect the one-handed self-portrait.

Afterwards, we visited the gift shop, hereafter referred to as “the place where shit went down.” For the record, I think that souvenir photos – the kind you are forced to take when visiting almost any tall building (or novelty museum, or before heading on a boat tour) are ridiculously over-priced and occassionally tacky. Sometimes, though, the photos are hysterical, and include friends of yours who you’ve known since the fourth grade, and consequently MUST BE PURCHASED.

This was one of those times … 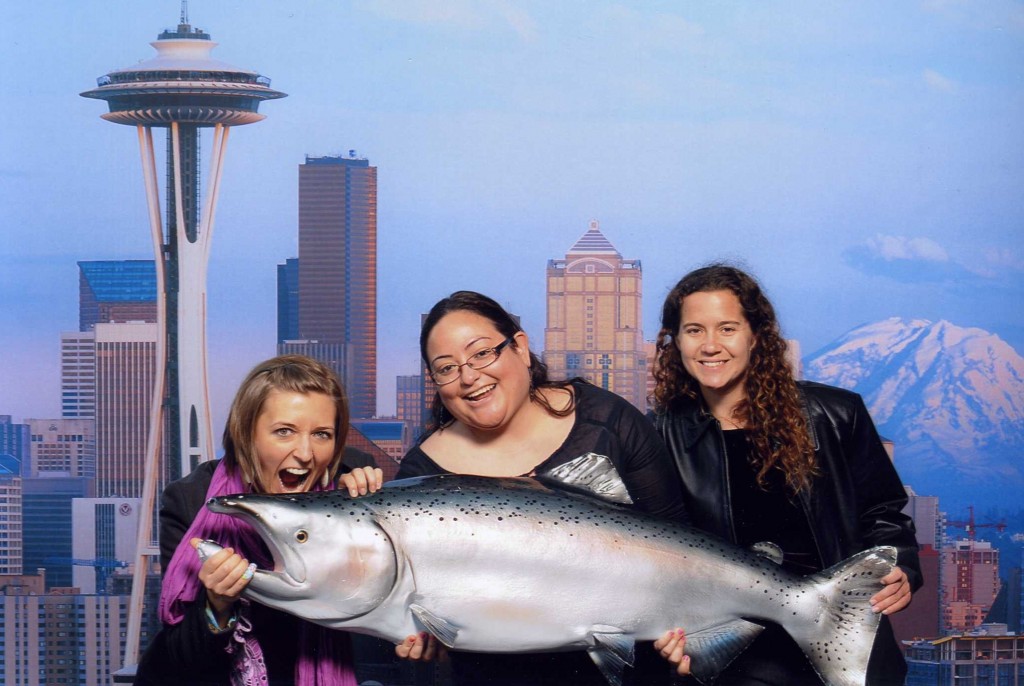 How could I not buy this? This is our relationship in microcosm.

So we chatted with the girl behind the counter, told her about our discount, and she quickly told us the price we’d pay for our photo – essentially $15 instead of $20. This was incredibly advantageous, because while $20 constitutes “too expensive”, $15 is just barely under the limit I find acceptable to spend on impulse buys.

I pulled out my credit card, and the girl took it and started ringing us up. She asked her supervisor was the discount code was, and her supervisor noted that it had been discontinued a few months before.

“There’s no discount,” the first gal explained. “It was discontinued a few months ago.”

We stood, a little confused.

“Yeah,” I said, “But you just quoted us on a lower price. Can’t you give us the discount, anyway?”

And at this point, folks, shit went down. They flat out refused to help us. They went from kind and courteous to downright rude. There was eye-rolling. There were cocked eyebrows. There was righteous indignation (on our parts).

We mentioned that the discount had been valid when Jamie bought her pass. We felt that Jamie’s discount should have been grandfathered in, and should still count.

The answer remained “no.”

This was no longer about five friggin dollars. This was about principle (isn’t is always?). In the end, I found myself quite unimpressed with the behavior of the staff at the Space Needle gift shop photo processing kiosk (There. I said it). At the point where we were politely asking for a discount that we have previously been quoted on, they should have given it to us and called it good (seriously, the profit margins on those photos are obscene. A $5 reduction wouldn’t have hurt anyone). I would have simply walked away, but the picture was so damn awesome, and frankly, I really wanted to get it. I figured we needed it as a balm for this stupid customer service. And we needed it at 25% off, but whatever. 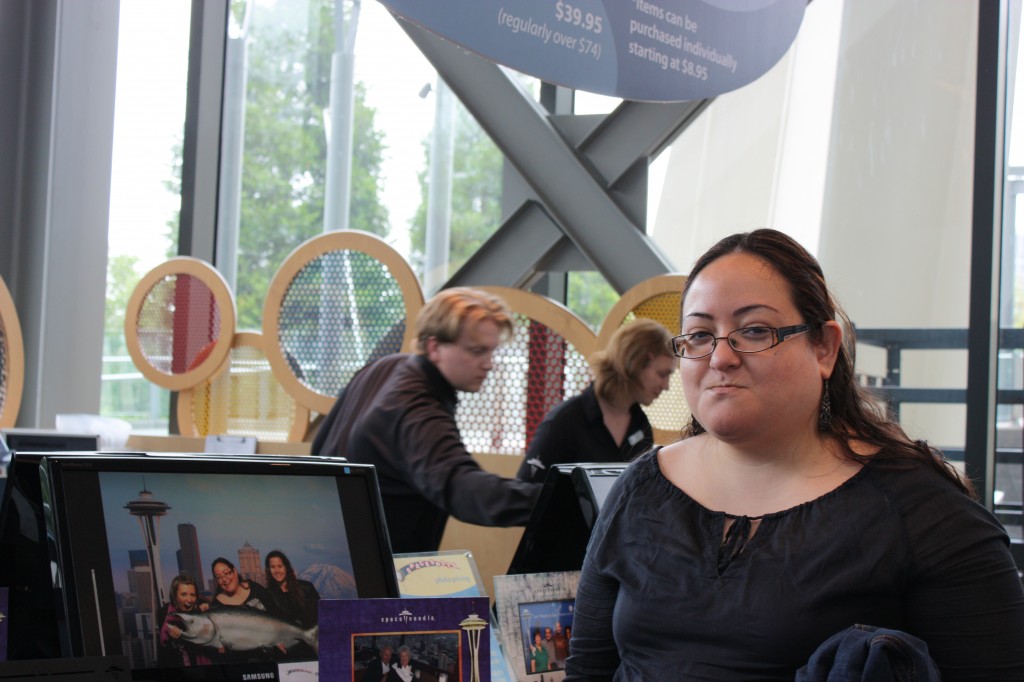 Angry Desiree is angry (sort of).

So I purchased it, full price. The photo was adorable, and I’m glad I did. But I was still peeved about the whole exchange, the lousy customer service, the lack of a discount I felt we were entitled to. So I did what any passive-aggressive, rule-abiding Seattlite would do: I wrote them a sternly-worded letter.

And, oh, how it was sternly worded.

I explained my displeasure at being in the process of paying and then being told I had to pay more. And how I felt Jamie’s discount should have been valid.

I received a prompt reply and an apology from a woman named Lisa. She explained that the discount hadn’t been valid for years (and that Jamie had been misinformed  by whoever sold her the annual pass – weak), but that the exchange shouldn’t have gone down as it did.

Frankly, that’s all I wanted to hear. If someone had said, “Shoot! I’m so sorry – that discount hasn’t been valid in ages,” from the start, I’d have been perfectly content, and wouldn’t have had to resort to the barbarism of a complaint email.

But Lisa insisted on going one step further, and sent me two free passes to the Space Needle. For the record, I felt this was unnecessary. I don’t like it when companies reward complaints with free stuff (I think it just encourages illegitimate complaints, and it doesn’t solve the original problem). And I didn’t like the guilt I felt upon receiving the free tickets – because it wasn’t a fair exchange. I wanted a $5 discount – not $40 worth of free passes.

But it still was a lovely gesture, and a smart one – I applaud her for it.

Fortunately, my friend Katie is visiting next month, and I’ve promised the tickets to her (she has the noble profession of being a teacher. She deserves free stuff).

And I’ll suggest maybe she should skip the photo kiosk.