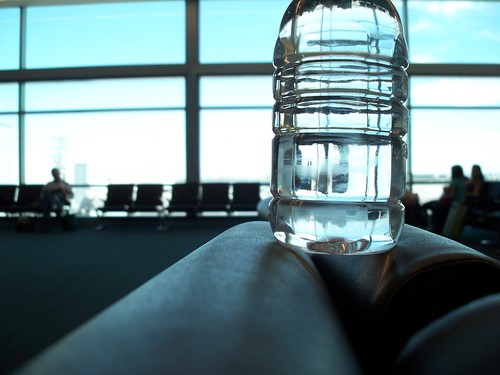 I could have easily turned this post into a Dick Move!, but that’s pretty much a given when the TSA is involved. It seems there’s no point in even complaining about them any more. Though they supposedly serve the people, they’re not accountable to the people. It puts them on par with the IRS, the secret police, or an evil monarch.

On my most recent encounter with the TSA-holes at SeaTac Airport (who are, for the most part, morons, with a scant few exceptions who tend to work every other Easter) I thought I was prepared. I had my toiletries in my 1-quart bag. Everything was 3 oz or less. I had removed my shoes. And my jewelry. And anything else that would have branded me as an autonomous individual with rights. I had placed all those things, along with my sense of self, into the a little plastic bin in order to be scrutinized by people who I assume are literate (but, when it comes down to it, I have no evidence of that fact).

I’m being melodramatic, aren’t I? Forgive me. I’m Italian. And Russian. A combination that leaves one with a dark and somewhat theatrical view on life. And because I know that this tendency of mine, along with my big mouth and compulsion to speak out against completely asinine and bullshit rules, is bound to get me in trouble (and probably handcuffs) one of these days, I usually make sure that I know said rules ahead of time. Knowledge is power, and all that jazz.

But this time, I flat-out forgot. I usually carry a reusable water bottle with me whenever I travel. It’s proved indispensable time and again. Restaurants and food stands are more than willing to fill it up for me, which saves me a ton, and results in less waste than if I were to buy a bottle of water. And this time, I forgot to check if it was empty. Naturally, it wasn’t.

Here’s the exchange that ensued:

TSA-hole (exasperated): Ma’am, you can’t take more than 3 oz past security, even if it’s just water.

Me: Oh, shoot! I’m so sorry. I always check that! Is there some place I can dump it out?

TSA-hole: If you want to dump it out, we’ll have to go back out to the other side of the security checkpoint.

TSA-hole: If you want to drink it, you’ll have to go back out to the other side of the security checkpoint.

Me: Um … what if I just decide to throw the whole thing out?

TSA-hole: If you want to throw it out, you’ll have to do so on the other side of the security checkpoint.

(Let it be known that at this point, I thought I was losing my mind – whatever I said or did, her reply was the same. I did notice, though, that Rand was on the other side of the security checkpoint – he had yet to go through the metal detector.)

Me: What about my husband? Can he drink it? He’s on the other side of the security checkpoint.

TSA-hole: He’ll have to go back outside the security checkpoint.

Me: Isn’t he already outside?

At this point, the TSA-hole took the bottle and grabbed Rand out of line, who, god bless him, seemed to be paying some attention to what was going on, and wasn’t entirely shocked (though he was shoeless). When they disappeared, I started to get nervous. Apparently, even though Rand was on the other side of the security checkpoint, that wasn’t sufficiently outside. He had to go back outside, past the initial screening, to throw the water out, then stand in line again with his now-empty water bottle. I felt terrible, and angry. When he finally made it back (in a blissful 5 minutes – thank god there hadn’t been longer lines anywhere) I was a flurry of apologies on my behalf, and anger at the TSA.

“Shhhhhh …” he said, sweetly at first, and then with increasing ferocity as he tried to get me to shut up.

I, of course, was angry, and wanted to hear nothing of it. Since when did the area right in front of security become part of security? Why on earth did the TSA-hole make Rand go all the way back to the bathrooms? After all, if I had noticed my water bottle wasn’t empty, and gulped down the rest before setting it on the conveyor belt, none of this would have happened. So since Rand was on the other side of the conveyor belt, why couldn’t he just drink or dump out the water? Technically, he wasn’t through security. Why make him go any further out of it? AND WHERE THE HELL WAS THE SIGN THAT SUPPORTED ANY OF THE B.S. THEY WERE TELLING US TO DO?

I was hissing some of this as we were putting on our shoes, just on the other side of security. I was like someone who had just made it over the Berlin wall, taunting the soldiers on the Communist side. Which, as though it needs to be said, is a very bad idea. Because the soldiers still have guns.

Rand reminded me of this as he dragged me away.

“Do you know how many times I’ve seen people complaining about TSA on the other side of security get hauled back and interrogated?”

“It happens all the time. They want to make an example of people. And make sure no one complains.”

Sigh. He was right. No complaining within earshot of the TSA-holes, because they can lock you up. But still, that seems to only make things worse. We’re acknowledging that they have absolute power. That we can’t sway their behavior, or make them treat us like human beings through the power of complaint and fear of losing their job (which, let’s face it, makes any non-governmental employee treat you a little nicer).

It’s an unjust and unfair system. And it’s led me to two conclusions. The first is that I’ll stop complaining about TSA anywhere close to them (that’s, after all, what my blog is for). And the second is that I just might consider applying for a job at the TSA.

I think I have the right attitude for it.