I remember reading in one of Anthony Bourdain’s books (and I can’t for the life of me remember which, so don’t ask), about the time he and his brother went to the their (deceased) father’s village in France. And as they walked the tiny streets and explored the seaside, they realized something was absent from their trip. And they looked and looked for it, but couldn’t find exactly what was missing.

And then it hit them, clear as day: they were looking for their dad.

I’ve felt the same thing before, rather acutely. After my grandparents died in 2001 (during a particularly crappy summer whose casualties also included my cat of 17 years and my first “serious” relationship), I threw up my hands and said, “Screw it, I’m leaving town.” I scraped up all the money I had (which, at 20, wasn’t very much) and got the hell out of Dodge.

I went to Italy for a month. And during that time, I might have done more damage than good for my already then-fragile psyche (I am not built for binge drinking and summer romances). But hey, it was better than being at home. I stayed with my aunt and uncle, and on one scorching hot day, they decided we should go see my grandparents’ village.

(Note from Geraldine: it was at this point in composing this blog entry that I tried to find some video footage of my my grandparent’s village on YouTube. I found one video, and was incredibly excited, until I realized it was an incredibly depressing documentary about how young people are leaving Frigento to find jobs elsewhere. It basically paints the town as hopeless and dying. Thus, an hour was lost, and I find myself in need of a drink.)

And we roamed the streets, my cousins and aunt and uncle and I. We stopped by a woman selling produce who asked us who we were related to – because strangers don’t head to villages that tiny unless they’re visiting someone. And when we told her who we were, she got misty-eyed remembering my grandparents, and said how they had been friends of hers.

We walked down the street where their house used to be (they later bought one across the street); and again, someone else asked us who we were. We told her, and she explained that when she was in school, my Auntie P. had been a good friend of hers. It’s funny: she said it kind of proudly. Like we had this shared ownership over the same people. And then she looked closely at me and said, “Yeah. I know your face. You look like them.”

Now, let me be clear: falser words have not been spoken. I look nothing like my mom’s family. They’re full-lipped and big-eyed and effortlessly gorgeous and SO DAMN SKINNY EVEN THOUGH THEY EAT EVERYTHING.

And I am fully able to admit that my dear cousin, with her flawless skin and ability to shave her effing head and still look adorable, inherited all of that. I can say that without any jealousy or ill-will (provided I quietly dig my nails into my palm). 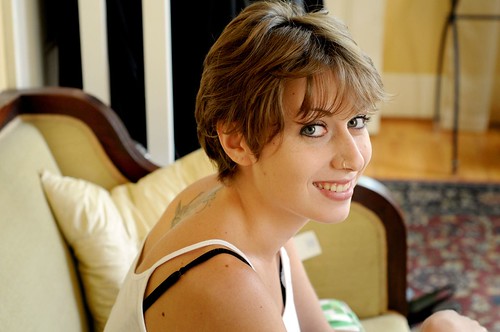 We get it: you're adorable. Now please go away.

But for whatever reason, this woman thought I looked like my mom’s family, and specifically my grandmother, and I’ve never forgotten it.

We spent the day there, and I thought that the visit would help with my feelings of loss, but they only made them more acute. I had thought, if I looked hard enough in that village, I might find my grandparents there, in some way. However woefully misguided, I was convinced that if I turned the right corner, they’d be sitting there, younger than I had ever seen them, in the middle of a game of cards.

And I won’t lie: that’s part of what I was looking for when I trudged through that documentary. And the other half dozen videos of Frigento I watched. I keep looking for them: in the streets of their village, in grainy videos uploaded on YouTube, and, oddly enough, in food.

I know, I know: the jokes abound, and I’m doing my absolute best not to succumb to any of them (because once, just once, it’d be nice to have a post that didn’t embarrass my husband).

When I was little, and we had yet to move to Florida, my grandfather would purchase small, dried salamis from the market. I’m not quite sure which grocery it was – it might have been PFI or possibly DeLaurenti‘s (back when it was owned by Italians). I have vague recollections of a gray cement floor, and him selecting the salami he wanted.

And when we got home, he’d pull out a small cutting board and a paring knife. These, along with a fork with the tines spread wide (to catch more pasta) were my grandfather’s tools. He’d cut a few slices off the salami, and hand them to me, who’d be watching, expectantly and quietly, by his side. I don’t quite remember if everyone got to try it, and I suspect that they didn’t. The salami was imported, and was a pricey thing to get in Seattle in the 80s. We only had it occasionally, but I remember every time we did, he’d always hand me a slice first.

There were even times, if I had been particularly good (which was never the case) or he was feeling particularly exuberant after a few glasses of vino, that I’d even get a whole sandwich, and the sole ingredient between the slices of bread were tiny little rounds of that salami.

In my later years, I’ve looked for it. I’ve spent thousands of dollars trying to find it. I’ve purchased virtually every charcuterie that DeLaurenti and PFI offer. In Italy, I asked my uncle if he had any idea what it was, and he was unable to tell me. Wild boar, duck, pork – I’ve tried virtually every variation and kind you can think of, without any luck.

I’m trying to taste a memory.

I realize the impossibility of finding it. But still, I’m convinced that one day I will. Because, as sarcastic and cynical as I am about everything in life -absolutely everything – this is one area in which I have faith. I think that everything that’s left us – missing socks, lost loves, songs we’ve never quite caught the name of – eventually comes back.

And so, when Rand and I were at DeLaurenti’s today, I asked to try a few salamis. When I had one that faintly reminded me of that which I had lost, I asked Rand if we could get some – despite being more than $30 a pound. And of course he said yes. I’m going to try some tonight, and see. Maybe, maybe it’s the right one.

And if it’s not? I’ll keep looking. 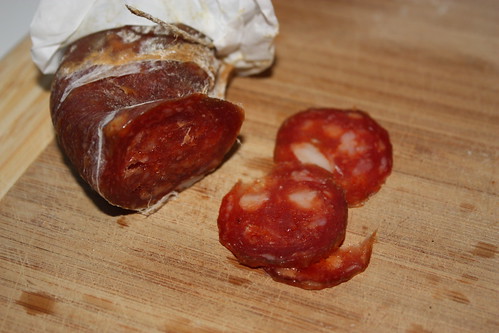