In the travel world, certain places have an air of exclusivity. You can’t simply sign up for a tour or call up for a reservation. They are open only to the wealthy and connected.

Needless to say, I am neither of those things. So I generally dislike places that are shared secrets among people in the know. If something is amazing, I think that everyone should know about it. But obviously, that would ruin it and make it less amazing, and … sigh. You get the point. Obviously, it helps to tell myself that I don’t want to get into exclusive clubs or restaurants in the first place, because then I never need  to confront the reality that I couldn’t get in.

Which is why, when Rand and I received an invite to dine at the Brasserie at La Esquina, a supposedly impossible-to-get-into restaurant in New York (at least, impossible for the likes of us)  with a group of his colleagues, I was hesitant. It seemed that sort of clique-y, upscale place that I generally shun. And frankly, I’d rather not step into that world at all. It makes me feel strangely inadequate and snobbish all at once.

But, since I figured it would make a good story, and I’m always up for a meal with friends, I put my neurosis aside and decided to have a friggin taco or three.

After dinner, I was of two minds.

A few weeks before, we had been hanging out with some of Rand’s colleagues. And after a few drinks, and bit of bragging, the flashing of an American Express Centurion Card, and a few dares of “You can’t really get us into this place,” someone at the table ended up with a reservation. And we ended up with an invitation to dinner.

La Esquina’s brasserie is located underneath it’s street-level taqueria (where it is far easier to grab a bite, thankfully. Honestly, the taqueria seemed far more my pace). You walk to the back wall of the taqueria, where a bouncer and a guy with a clipboard check to see if you’re either ridiculously good-looking, a minor celebrity, or incredibly wealthy. As I noted before, we were none of those things. But our reservation holder was with us, and showed his I.D. We were let through the door, and down a tiled stairway to the basement of the restaurant. We walked down a hallway, through the kitchen (and as we did so, passed some random British celebrity on his way out), down another corridor, and into a dimly-lit, dungeon of a restaurant. 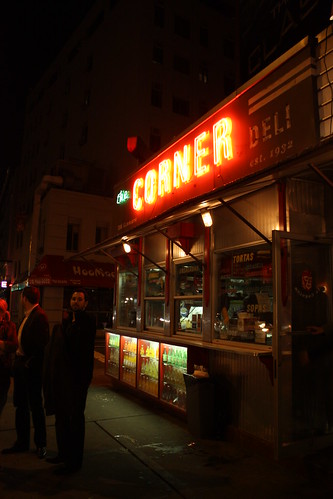 The diner atop La Esquina.

There were more celebrities, and gorgeous people everywhere. Women in tight dresses with no body fat. Men with perfectly tousled hair who spent the majority of their waking hours at the gym. I generally do not enjoy consuming food in front of people such as these. It is less because I am self-conscious and more because they look underfed, and I, consequently, fell guilty.

But consume food we did. Apologies for the photos. I didn’t want to seem like a paparazzo with my huge camera, and I sincerely thought that someone was going to stop me from taking pictures.

Here are the people at our table … 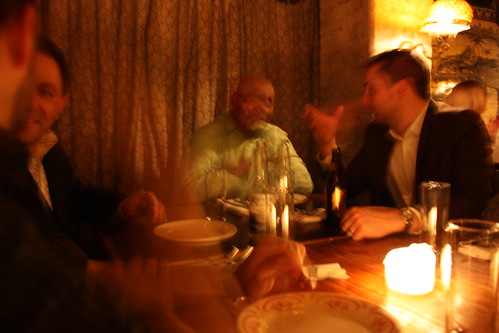 They're far less blurry in person. 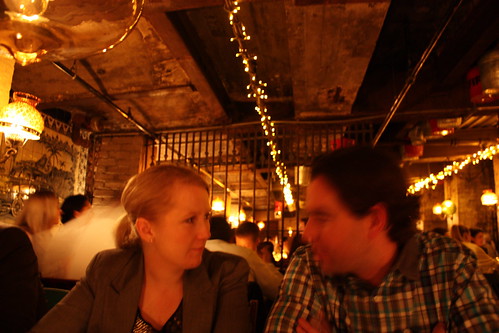 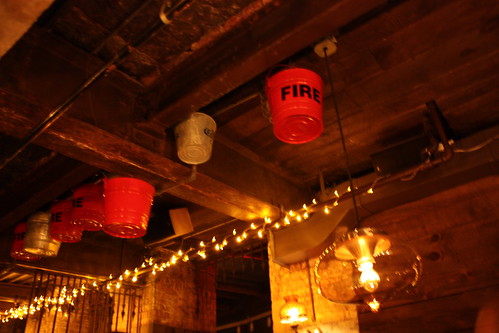 I don't know if these were for show or not, but they did make me realize that in the event of a fire, we were all doomed. 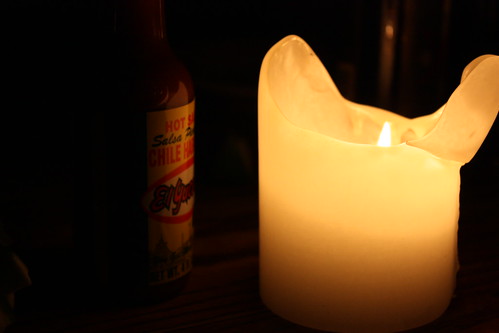 Sometimes I try to be artistic. 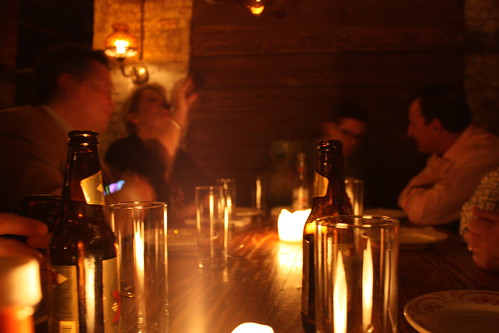 I'm incredibly proud of this shot.

But you probably don’t want to hear about the ambiance and the good company, right? Who does, in matter like these? Instead, we should get to the food. Because of the size of our group, we were forced into a fixed menu, and the quantity was absolutely obscene. Everyone was full by the time the actual main course arrived. The starters were several different types of tacos, salads, ceviches, and sides. It was than enough for a full meal, and so when the roasted chicken, steak, veggies, and corn arrived, we all sort of stared at it, thinking, “You’re kidding, right?” 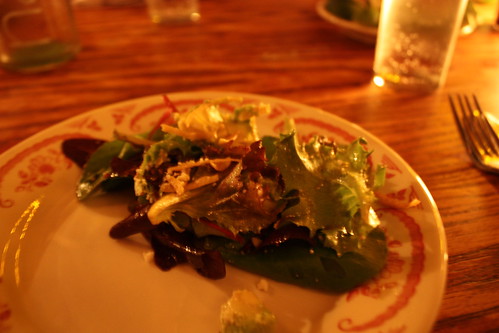 The simplicity of this salad is deceiving. It was awesome.

At some point, I caved and used my flash. I was not, I am pleased to say, tackled by someone’s bodyguard … 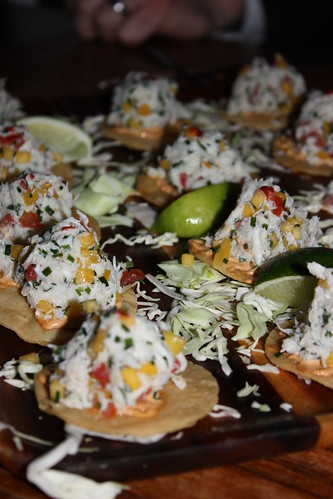 Crab tostadas. I think I ate six of these. 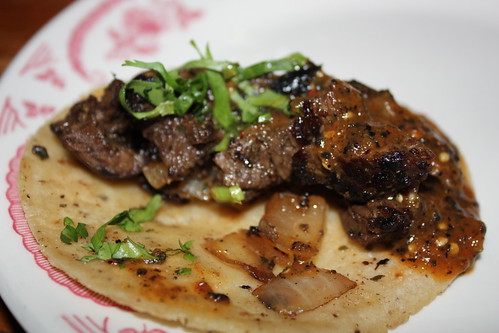 I can't believe I managed to photograph things while stuffing my face. I can multitask, after all. 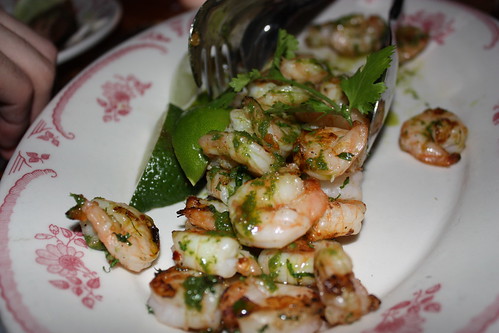 Grilled shrimp; it came after the appetizers, and got very little love, as we were all already full. 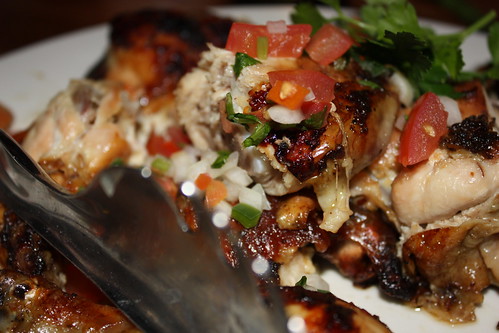 Ditto for the roasted chicken, which, dammit, is making me hungry right now.

I can without exaggeration that it was unforgettable, and truly one of the better meals I’ve had in recent history. And even as I type those words, I’m sure someone reading this is thinking to themselves, “I’ve been there. That place isn’t that great.”

Because that’s how things go: first a place is undiscovered. Then it becomes beloved. Word spreads. It has to spread – otherwise fantastic restaurants would go out of business. Then perhaps it spreads too much, and becomes over-hyped. Quality might suffer. It is a complicated and weird thing, the life of a popular restaurant. And so you understand why, on most days, I avoid it all together. I eat at establishments where no one is a celebrity, where there are no bouncers, no secret entrances, no lines. The food at places like that is often fantastic. But rarely is the entire experience unforgettable.

And rarely do we get lost on our the way out. 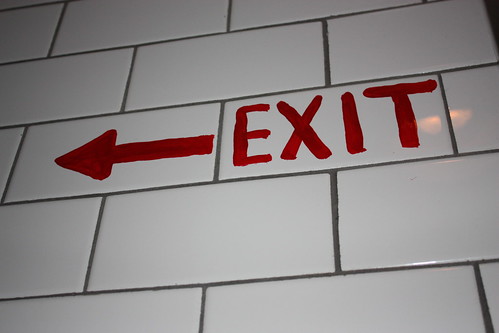 I will probably go back next time I’m in NYC … but if I do? I’ll be eating at the taqueria upstairs. And we’ll pretend that I had a choice in the matter.