There are many types of people in world. Some, I daresay, are better than others.

They are the sort of folks who run marathons.

That benefit good causes, like the American Cancer Society.

And they do all these wonderful feats on the morning of their wedding.

My friend Rachel is one of these such people.  While we were roaming around New Orleans, she was running a half-marathon (and simultaneously making the world a better place).

On, in case you didn’t catch it the first time I said it, she ran a half-marathon in New Orleans on the morning of her wedding. But I’ll get to that in a moment.

The morning of the wedding, Rand and I walked around town. Prior to this trip, I had assumed that New Orleans would be broken, quiet, and bitter. But it wasn’t any of those things.

It was bright, beautiful, and so damn caring, it would break your heart. 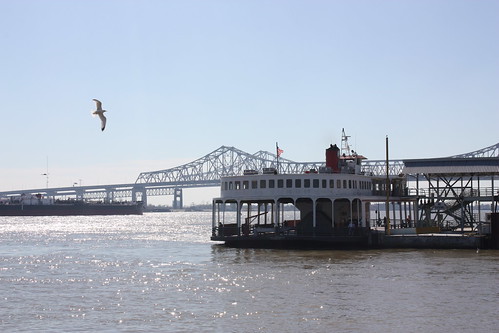 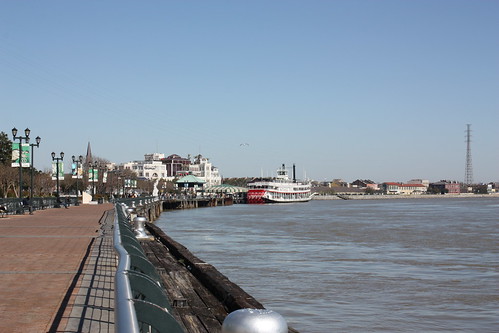 Dude, I really should have read Huck Finn. 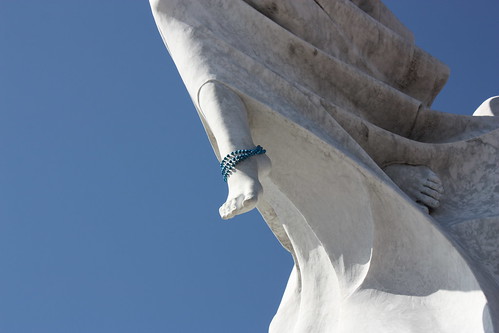 She was wearing quite a lot of beads, esp. considering she wasn't a topless statue. 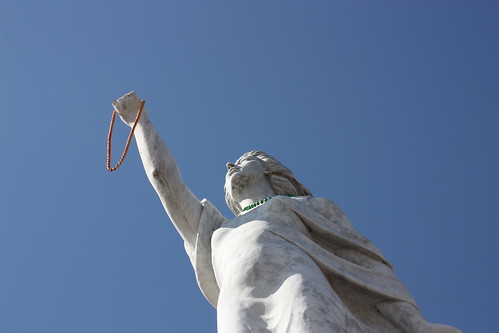 But I'm sure she earned it, nevertheless.

It’s kind of like how you would assume a woman who’d just run a half-marathon on the morning of her wedding would be cranky, exhausted, and a little bit nuts. But instead, she was the same radiant, sweet, and utterly content Rachel she always was. Well, maybe a little more so.

After all, on this day, she had beignets.

Oh, and she was getting hitched, too. That might have had something to do with it. Maybe. 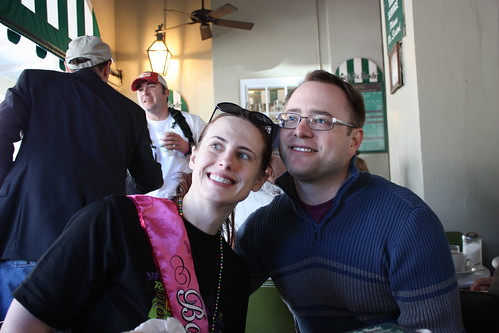 This photo warms the brittle lump of coal that is my heart. 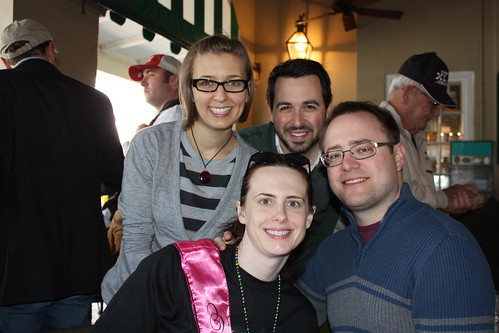 As soon as I am home for more than five minutes, I will print this photo and frame it on my wall.

Oh, and the beignets. The beignets! They’re the sole item of food on the menu at Cafe Du Monde. And really, the only thing that needs to be. We were at the French Market location, which is open 24-hours a day, and which Rachel explained was her late-night hangout in her high school days. 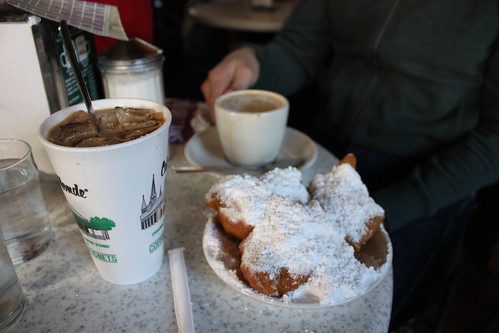 Rand and I decided to split an order of three, which was a mistake. Get three to yourself. Trust me.

We ordered some. In the warm, early spring breeze, eaten alongside a cup of iced coffee, any woman will find herself glowing like a bride on her wedding day.

And if you really are a bride on her wedding day? The rest of the folks nearby had better wear shades.

The French Market itself goes on and on. It’s worth a visit. 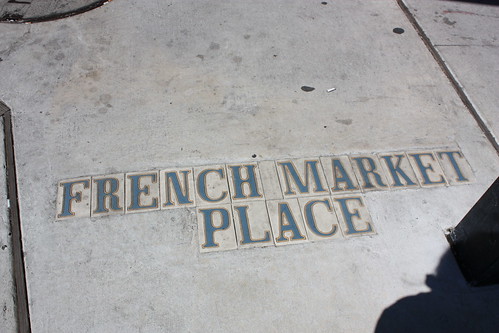 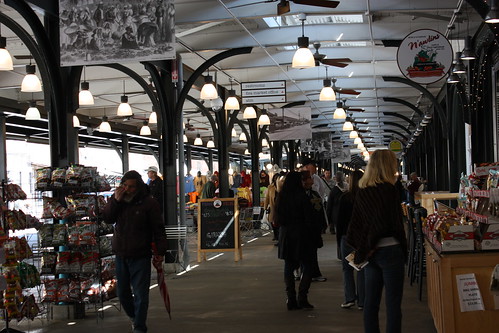 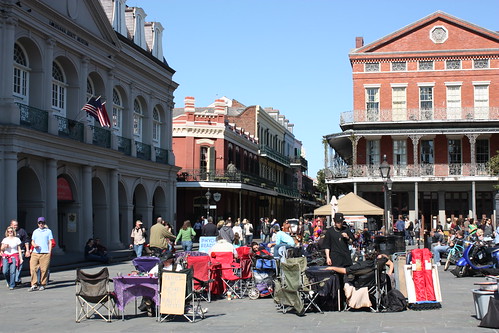 There were rows and rows of palm and tarot card readers, but I couldn't convince my husband to try it.

By far one of my favorite scenes was this one: 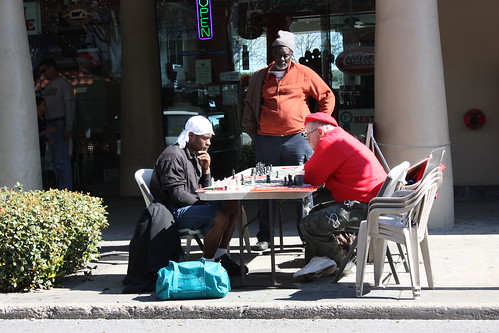 As we walked around, I couldn’t help remembering all the stories I had heard about New Orleans after Katrina. The impression I had – of a city lost and in ruins, didn’t jive with what I saw – people laughing, playing music, dancing, and so damn happy to see one another. I don’t want to sell you a fairy tale. Everything isn’t sugar and daffodils. Not even close. But the thing is, it is so much better than you could imagine, and I suspect that things will continue to improve.

And one of the reasons why I believe that things will continue to get better? This: 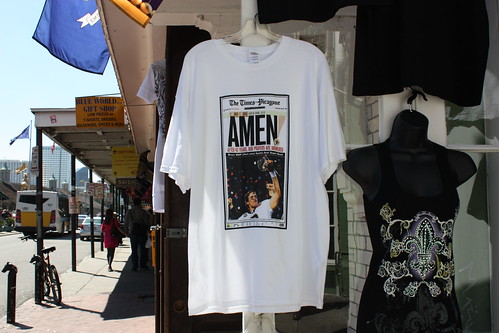 For those of you who don't know, that's an image of Drew Brees, the quarterback for the Saints, holding the Superbowl trophy.

Here’s the thing: I stand by what I said in an earlier post – the number of people who jumped on the Saints bandwagon pissed me off. I’m not going to abandon the Colts and cheer for the Saints just because it’s the cool thing to do. But if you ask me to root for the state of Louisiana, and New Orleans?

Salvation comes in a lot of forms. For NOLA, appropriately enough, it came with The Saints. I’ll gladly have my team lose, any day of the week, if it means sending happiness and hope to New Orleans. And I hope the people who live there continue cheering for their team until the end of days. 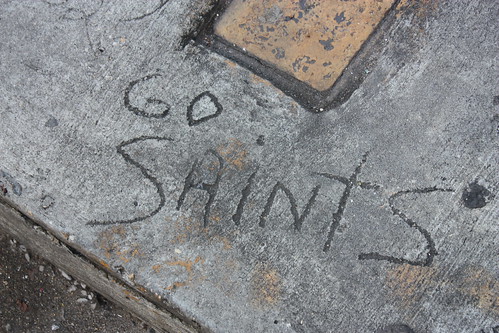 You must mean "Go NOLA." I'm on board with that.

But the rest of the poseurs should shut up.

Anywho, where was I before I went on yet another tangent about the Superbowl? Ah, yes. New Orleans. Rachel getting married.

Before the wedding, Rand and I searched for a spot to get lunch. We bumped into Gastrognome, who gave Coop’s Place a glowing recommendation. Naturally, we couldn’t ignore her, and I’m glad we didn’t. 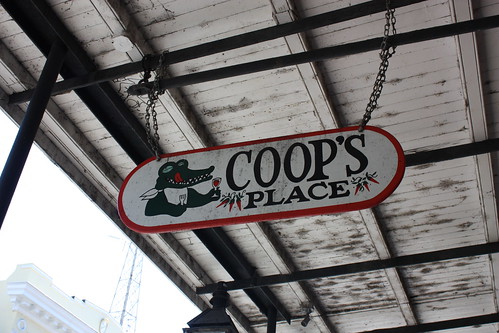 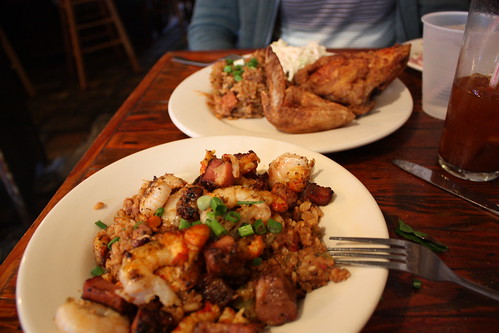 Rand and I might have fought over the chicken. And his bloody mary. And everything else we ordered. I’ve heard everything there is pretty damn fantastic, and from what I tried, I believe it.

And while it was a singularly fantastic meal, it wasn’t the best one of the day. Not even close, because dinner was still to come.

Rachel and her groom (who will forever be immortalized by these events) decided to have their dinner at Restaurant August. And from here on out, anyone who is planning a wedding at any other location is making a grave mistake. Because while I am sure the church where your grandparents were married is a lovely and sentimental venue and all, it doesn’t serve food like this … 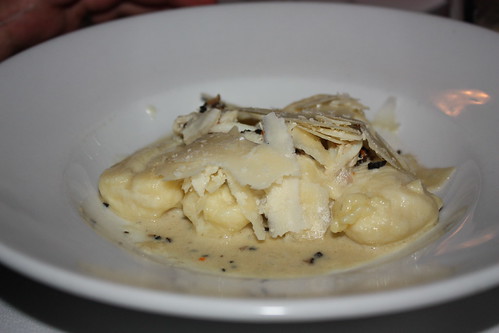 This was the starter: gnocchi, with crab and truffles. Just thinking about it makes me smile. 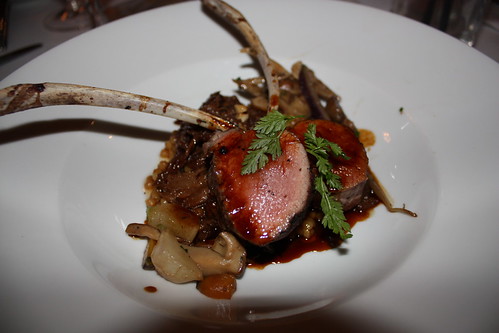 At one point, I was un-self-consciously gnawing on my lamb rib chop, explaining to a few others at the table that “meat lollipops” were possibly one of my favorite things in the world. As I was doing so, I caught a glimpse of Gastrognome across the room, deftly gnawing on her rib chop.

“I love meat lollipops,” she would say to me later, because she is awesome.

The food was exceptional, but it wasn’t really a surprise.

“What else would you expect of Rachel and Chris?” someone said. And they were absolutely right. 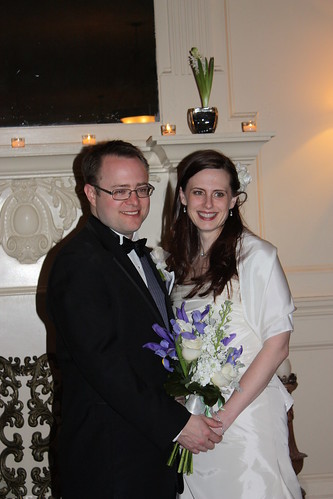 I realized that even if New Orleans hadn’t been so wonderful, I’d still love it for one reason: it was her hometown. Fortunately, like I said before, I found it bright and beautiful. And so damn caring.

I’m glad she’s in Seattle now, and we get to see here often. But if she ever needs us to go to New Orleans again, we’ll be there in a heartbeat.

I just hope it’s not during play-off season.