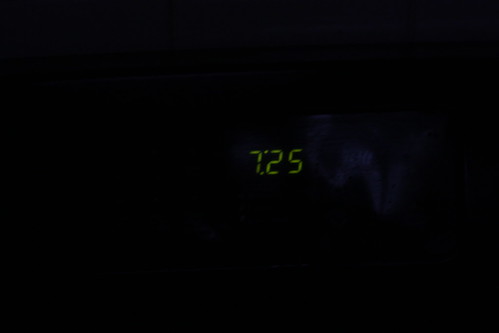 We woke up this morning, smack dab in the middle of our two months of mad travel, under the distinct impression that we were, for the first time ever, going to miss our flight.

Now, several hours later, we’re eating breakfast with my family, and I am doing my best not to ridicule my husband. Because, as my dear friend Lauren says about her boyfriend, “Well, at least he’s pretty to look at.”

We flew in from New Orleans last night, landing in San Diego to spend one last evening with my family before heading home (on a side note, I saw my brother for all of an hour before he pissed me off to the point where I stormed upstairs. But more on that later).  Before going to sleep (at midnight, which felt like 2 am on account of the time change between Louisiana and California) I asked Rand if he had set an alarm.

For future reference, answers given by your spouse when he or she is severely sleep deprived and laying in bed probably cannot be held up in court.

So when I woke up to a grey San Diego morning, and realized Rand hadn’t set an alarm (and had no recollection of me asking him to do so) I wasn’t that surprised. It would be fine, as long as we made it to our 10:30 am flight. Which was 2 hours away. And we weren’t packed.

I will say now: I have hauled ass like that only once, when I had roughly 20 minutes to shower, pack, and get myself and a colleague to the airport. Viewed from above, I imagine the scene was somewhat reminiscent of dropping a jolly rancher on an ant hill.

This morning was a little bit like that. At 9:15 am, having defied the laws of physics and space-time in order to get our bags packed, we ran downstairs.

“Time for a cup of tea?” my uncle asked.

“No, no, no! We’re super late.” I glanced at the kitchen clock, just to be sure.

“Actually,” I said, putting down my bag. “We do have time for a cup of tea. We have plenty of time.” And then I started laughing, maniacally.

Rand turned and looked at me.

“Baby,” I said, sweetly. “When you forgot to set the alarm, did you also forget to change the time on your watch?”

The look on his face was priceless.

It was 7:15. And we had nearly 2 hours before we had to leave for the airport. So we’re now finishing a cup of tea, and spending some time with my family.

And while severely sleep-deprived, I’m still finding the whole scenario funny. But that’s probably a sign of exhaustion.