And the very same time, this happened (Turn the volume down because I scream. A lot):

I suppose  I should explain, right? Ah, but it’s such a long story. And most of you have probably heard it before. The crazy guy who was trying to propose on a commercial on the Superbowl. It fell through, so he proposed on local TV. The abbreviated version is this: I was watching TV with friends. A commercial came on. The rest is (my and Rand’s) history.

If you want to know more, there’s an article about it here. People always ask if I really didn’t suspect a thing, and I usually say, “Of course I didn’t. You really think I’d have left my hair like that if I had suspected someone was filming me?”

Consequently, I am now one of those people who won’t be seen without make-up. But that’s another story.

Rand’s commercial made a tiny little blip on the cultural radar, and we got tons of emails from friends and relatives who had seen us on the news, or Access Hollywood, or (gulp) being interviewed by Oprah.

But the weirdest part of all of this is that, for whatever reason, we’ve made it big in Japan.

Okay, fine. Maybe not “big”. But thus far, we’ve been approached by four Japanese TV shows who wanted to profile our story. One already aired last year. The show was called something like, “World’s Most Astonishing Videos.”

One of the producers of that show (who was actually in San Francisco, but worked for a company out of Japan), asked us a series of questions (the sort we had come to expect: “How did you come up with the idea?”, “Did you suspect he was going to propose?”, “What did your friends and family think?”).

Then they sent a television crew to our house, and they filmed us opening the door and greeting them.

They filmed us talking about our story, showing them around our apartment, and doing the dishes. At some point, they asked us to pretend we were cooking a meal together, so I think Rand started chopping a carrot or something. The filming and interviews took the better part of an afternoon. They also let us know that they would be hiring actors to re-enact parts of our story.

Yeah. That’s right: Japanese actors playing us. This had potential for amazingness.

The producer then called us again with another set of questions, which were far stranger than the run-of-the-mill things they had asked us to cover the first time around. I suspect that our reaction can largely be explained by cultural relativism: what’s strange to an American can be perfectly reasonable to someone else, and vice-versa. But nevertheless, it made us a little uncomfortable:

“What are your siblings’ names? And what work do they do? Are they married?”

They proceeded to ask our parents’ and grandparents’ birth dates, the year they were married, which college and high school they had attended (along with their areas of study and favorite subjects), places of birth, ethnic backgrounds, employment histories, and asked for a detailed story of how each couple met. They asked the same about our siblings. The wanted to know details about my brother’s wife’s job. For one brief moment, both Rand and I thought it was an elaborate hoax to steal our identities (“And what’s your mother’s maiden name?”). At some point, Rand noted that this chain of questioning was quite unusual to him and making him somewhat uncomfortable (note: when a guy who proposes on TV thinks something is too intrusive … ).

“Yes,” the producer replied. “We often get that response from Americans we talk to, but these are the sort of things our viewers are interested in.”

Zuh? Really? For however flattering it is that someone would be interested in the minutia of your life, it’s also really, really strange.

Still, the producer was incredibly nice, and she seemed genuinely interested in our story(and to this day, I haven’t seen any evidence that she took out a credit card in my name).

We drew some lines: I didn’t end up sending them video footage of the wedding, or our official wedding photos, even though they requested both. I just wasn’t comfortable with that. The producer was incredibly polite and understanding about it (though she did seem a bit disappointed).

And though we asked for a finished DVD of the episode, we never saw it. But several months ago, Philip sent me this: 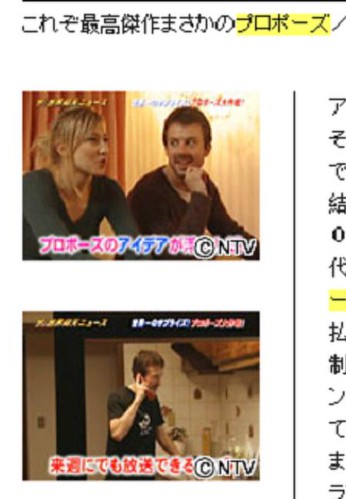 I’ve always wanted to be blonde and skinny.

It’s from the “World’s Most Astonishing Videos” website. You can see the two actors that portrayed us (as you can imagine, we were profoundly disappointed they weren’t Japanese).

And though the proposal was years ago, I think about it every time the Superbowl rolls around. And on the Tuesday after the Superbowl. Sometimes I re-watch the commercial, even though I’ve seen it a few dozen times by now. It makes me smile.  I suppose it always will. It was one of the best days of my life, and will always be – irrespective of whether or not it made us pseudo-famous in Japan.

But it has: we’ve recently been contacted by three more Japanese TV shows in the last two weeks (we’re not sure why).

And, yes, as usual, the questions started again. Some of them seemingly relevant, and others strange and tangential.

We’re politely answering their questions. We just have one request: they absolutely have to send us a copy of the DVD.

P.S. – A lot of these shows have offered to pay us in order to cover our story. My husband, hell bent on saving the world, always accepts their offer and donates the money to charity. Because he is awesome. We usually pick Seattle Children’s Hospital, but this time, he spoke to the Japanese producers and just told them to donate the cash to charity, prompting this exchange:

Me: Did you specify which one?

Me: You don’t know that.