I was originally going to make this a Dick Move! post, but honestly, if I did that every single time I felt the inclination, that’s all this site would be (and I’m pretty sure I can’t get the domain dickmove.com, and if I did, I would probably get a lot of misdirected traffic). But I digress. Besides, sometimes potential Dick Moves allow me to learn something useful that I can pass on to you, faithful reader.

This week’s lesson? If you’re catching a sightseeing bus tour in Scotland, you have to act like you want. I mean, really, really want it. Make a banner saying, “PLEASE STOP!” or “NAUGHTY CATHOLIC GIRL TRYING TO UPSET HER PARENTS” or “FREE WHISKEY” or something to that effect. Show some leg, and possibly some other body part. Jump up and down like a moron. Anything to get the driver to stop.

Otherwise, that tour bus will pass you right by.

We were staying at the Hilton Glasgow, and a local (a dear follower of my husband’s blog, who we had never met before but offered to pick us up from the airport and take us to dinner) suggested that I take the Glasgow City Sightseeing bus tour around the city. He explained that it was only 10 pounds or so to ride it, that it took you all around town to 20-odd stops, and that you could hop on and off at any of the stops at your leisure. The buses came every 30 minutes, so you had as much time as you wanted to explore the city. The stops were at major landmarks, museums, and shopping districts, so really, the whole idea is brilliant.

One of the stops was conveniently located not too far from my hotel, and since it was set to come at a littler after 10am, I decided to leave a bit early. I got to the stop at about 9:4oish am, and waited patiently in the cool morning air. There was nothing really around me – no coffee shops, no place to sit down. The hotel was a good 15 minute walk back.

After about 10 minutes of waiting, I saw one of the red tour buses approaching. Funny, as it was (according to the schedule) about 20 minutes early. I stood up, walked to the curb, and then watched as it zoomed past me. The driver didn’t slow down or glance in my direction, and didn’t even move into the curbside lane. It was this last bit that convinced me he wasn’t the bus I was looking for. After all, the schedule said the bus stopped at all designated stops, and this guy wasn’t even in the right lane.

So I waited. And I waited. And soon, the scheduled time for the bus to arrive came and went and I realized: the bus that had arrived 20 minutes early and had no intention of stopping? That was my bus.

So I stood in the cold, contemplating what to do. Since the buses weren’t at regular intervals, it seemed a bad time to go anywhere: I couldn’t be sure when the next one would arrive, or if it would even stop. But I decided to wait. And that freezing cold half hour that I sat there was filled with self-doubt and worry.

Was I wasting my time? Why hadn’t he stopped? Had I done something wrong? If I had a child, would they be cold or angry or fed-up by now? Was a bad mother before even having children?

These were the thoughts that preoccupied me until the next bus finally approached, 10 minutes after the schedule said it should have arrived. This time, he was in the curbside lane, and I stood, waved  my ticket frantically, and looked ready to break into a sprint.

Apparently that last bit was a good instinct, because again, he drove right passed me.

And I ran after him like a woman possessed.

About a hundred feet past me he stopped, and I was able to finally – FINALLY – climb aboard. I stared at him, breathless and cold, my hands shaking.

“Sorry,” he said, looking bored. “You didn’t look like you wanted it.”

ARE YOU FUCKING KIDDING ME? I had stood, flapping my arms like a bird in heat, and I didn’t look like I wanted it?

Next time I’m making a banner.

As for the bus tour itself, if you manage to actually hop on the damn thing, I highly recommend it. It’s only 10 pounds to get on (and I happened to have a coupon for 1 pound off) but make sure you have cash and that you hang on to your ticket. And despite the two crazy drivers that I managed to find, all the other bus drivers seemed to make their designated stops, and on time to boot. Plus, it’s an amazing way to see the city, and you can choose to listen to audio giving you information about all the places at which you’ll stop. 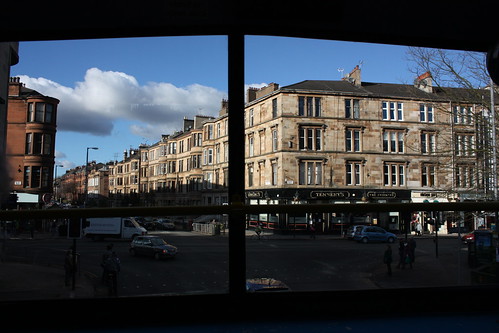 View from the top tier of the bus, looking forward. 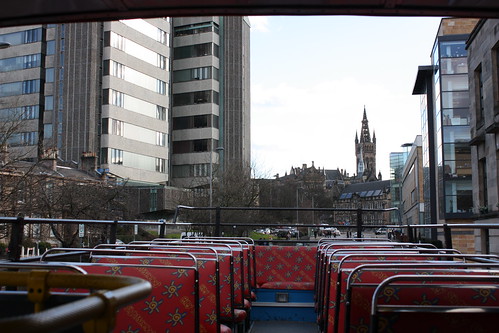 The top rear of the bus is uncovered, which would be rotten on a crappy day, but happened to be lovely when I went. 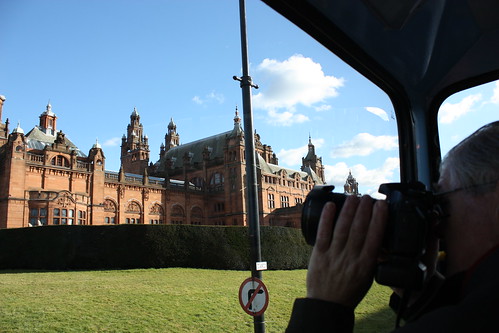 This is the Kelvingrove Museum, which is amazing - more on that tomorrow.

I only hopped off the bus twice – at the Kelvingrove Museum, and once at the University of Glasgow (more about those in later post). Though I’m sure there were lots of other places worth seeing, I highly recommend those two stops. Frankly, I was too exhausted to do much else, so when I hopped back on the bus for the third and final time, I decided to just stay there until the tour ended.

And I might have fallen asleep, opening my eyes now and then to take a  few crooked, out-of-context photos. Consequently, I have no idea what this building is: 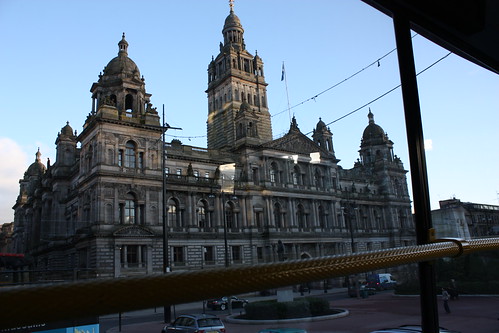 But it's pretty, right?

Though I might have misunderstood (I was asleep, remember?) I think that the following photos are of Glasgow Green where, apparently, residents of Glasgow have the right to hang their laundry to dry and let their sheep graze. Though no one seems to do either. There are even poles onto which you can string your clotheslines. While there’s a good chance your clothing will get stolen, it’s definitely something I want to try someday (with, you know, oversized novelty underwear). And apparently I’m not the only one. 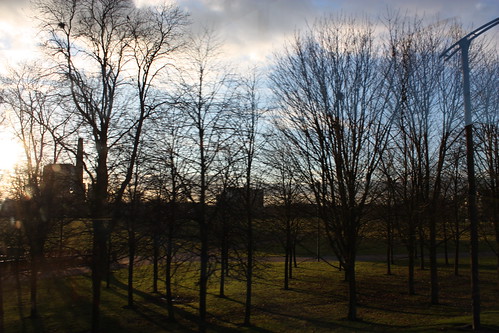 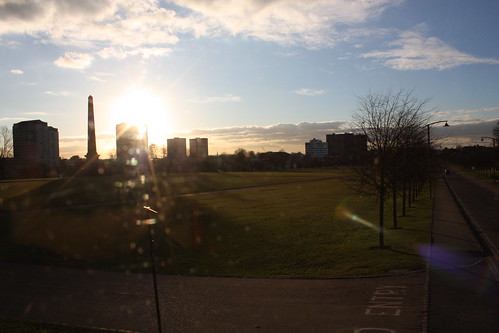 I should apologize for the quality of these photos, but I'm just impressed that I woke up long enough to take them.

If you ride the bus straight out (without hopping off) it takes about 75 minutes to see all the stops. Like I said, I stopped twice, and walked around a bit, got lunch, and took some photos, so it turned into a rather exhausting 5+ hour excursion, but was still entirely worth it.  Just make sure that, in the event you have to run after the bus screaming like a lunatic, you have your running shoes on. Just in case.