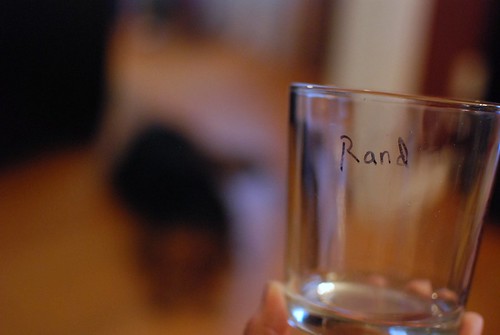 Not shown: the sombrero-wearing stick-figure drawn on the other side.

My friend Rachel took the above photo on New Year’s Eve. She was running short on glasses, so we had to write our names on our disposable cups. Rand followed suit, even though he had an actual glass. When simple directions elude you, it’s time to stop drinking.

But that is not the moral of this story, dear friends.

The moral is that it’s a new year. And that’s a very, very good thing. Because anything is possible this year.

Maybe it’s because I accidentally ate some hair product (by first playing with my hair and then biting my nails) and then listened to Cat Stevens, but I’m now convinced that our opportunities are endless, and the world is an amazing place. And I want to see all of it. Every damn inch of it. And quite a few of my tickets are already booked. Including one to New Orleans to celebrate Rachel’s wedding (I’m bringing my own Sharpie just in case).

But I’d better calm down, because I’m full of cyclomenthicone and good-intentions now, but who knows how long it will last? Hopefully 350 odd more days. During which I’m going to set out to meet these resolutions:

And, to accompany those resolutions, I also came up with 10 predictions for 2010.

I’m not entirely sure what’s going to happen and what won’t. One thing I can say definitively: We’re going to have a time.