Ladies and Gentleman, when I’m not doing a half-assed job of recounting my trips across the world with my husband, I am (removes glasses a la Clark Kent) … A COPYWRITER!!!

Okay, fine. So it’s not that exciting. I don’t pop into phonebooths and tear off my clothes at the first sign of trouble … There’s a joke there, folks. I’m not going to do the work for you.

But it does impact the way I see a lot of things. I feel a strong kinship to Peggy Olson, the secretary-turned-copywriter on Mad Men (and spoiler alert – don’t click on that link unless you are all caught up on Season 3). I hate the new Snickers ads (don’t tell me “they stay with you”, because you know what else stays with you? Genital lice.).  And I find So Sayeth the Anti-Chris (a blog written by friend and fellow-copywriter Chris Elzinga) to be all kinds of awesome. He even shares my disdain for Kenny Rogers’ plastic surgery, and my love for John Stamos. But I’ll ask you kindly not to visit his site, since he’s far more clever that I, and you probably won’t come back here.

I also find that I take note of ads, wherever I happen to be. The ones in the U.K. surprise me on a continual basis. British culture, as a whole, seems more buttoned up and, well, proper than American culture. I mean, we’re the rebellious, foul-mouthed bad-asses, right? And yet some of the ads I saw in England would never fly in the U.S. They’d be downright … scandalous. Here are just a few that caught my eye … 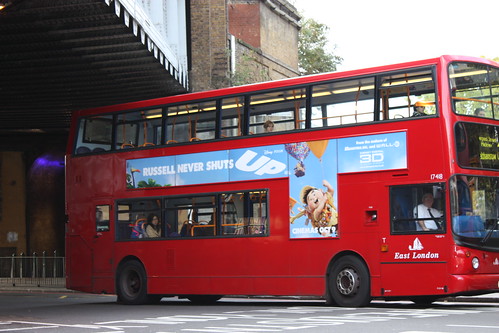 The ad reads “Russell never shuts UP”, and the last word of the tagline serves as the movie’s title. I was downright shocked when I saw this. Not because I thought it was offensive or unfunny (on the contrary, I thought it really worked well Pixar’s hip and edgy brand image), but because I can’t imagine Disney letting something like this fly in the states. It’s just a bit harsh for the squeaky clean image that the mouse has cultivated stateside. 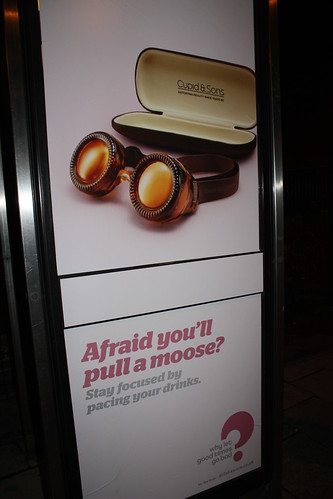 You can't see from this pic, but the band on the glasses reads "beer goggles".

It took a couple seconds for Yanks like me and my husband to figure this one out. We realized right away that it was an anti-excessive-drinking campaign (which in and of itself is kind of funny – it’s not even anti-drinking … it’s anti-getting-really-trashed), and beer goggles is a term we use in the states as well. We were just unfamiliar with the phrase “pulling a moose“, though we figured it out fairly quickly.

I was kind of conflicted about this – on the one hand, it’s clever and edgy and probably resonates with their audience. On the other hand, how sexist can you possibly be? I understand that they’re probably targeting a male demographic, but trying to encourage young men to drink less by bringing up the threat of ending up with an ugly girl? So. Not. Cool. I can see this sort of thing causing a lot of uproar in the U.S. Or, hopefully, anywhere.

This ad for an equipment rental company was fairly short and sweet. A simple tagline that read “Don’t get caught with the wrong rental” … along with Hugh Grant’s mugshot from his arrest for soliciting a prostitute. 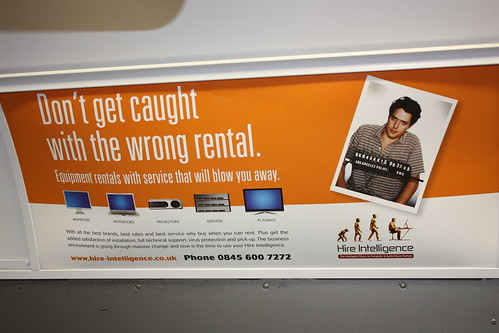 I'm not gonna lie - this was funny as hell.

Despite being slightly scandalized, I thought this was pretty darn amusing. There was even a double-entendre in the form of “service that will blow you away” which was tacky, but memorable.  I considered a few reasons why this ad could not work in the states. For one, Hugh Grant is just not as famous in the U.S. as he is in the U.K. While we’ve mostly forgotten about his indiscretion (which took place in 1995 – seemingly ancient history in the tabloid world. For reference, the Everywhereist was a mere 14 years of age), it’s clearly still a touchstone for the English.

For another, I can imagine any sort of blow-job/prostition reference causing a lot of uproar here in the states. Actually, I’m not entirely sure this ad is even legal in the U.S. You obviously can’t use a celebrity’s image to sell a product (and I’m guessing this ad was created without Hughie’s permission), even if the person is considered a public figure. I don’t know anything about British copyright law, but I’m guessing it’s a little less stringent than ours.

Some friends first told us about this, and I happen to love it. I’m not sure if it could be found offensive in the U.S., or possibly irrelevant (because the product being advertised isn’t featured prominently enough) but, personally, I thought it was great.

“What kind of cheese was that?”