And, just to get it out of my system …

Phew, okay. On to New York.

The High Line is great. It’s also free. And, as you all know by now, I will go anywhere if it’s free (except Vegas). But the High Line is legitimately worth seeing, not only because of the price, and its proximity to the art galleries of Chelsea (which are also free), but because there is some pretty wicked people-watching that can go on in that area. We were lucky enough to see Don-King-Elvis-haired guys, of whom I snuck a picture while pretending to photograph Rand: 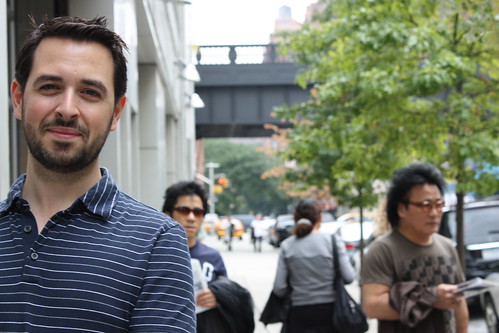 Do you know how happy I was when I saw that there was not one, but TWO of them? Very happy.

Originally built in the 1930s, the High Line was a set of raised railroad tracks built to accommodate freight cars passing through New York’s West Side. Prior to the building of the High Line, freight cars barreled down city streets, causing so many accidents that 10th became known as “Death Avenue”. In an attempt to preserve public safety, men on horses would ride in front of the trains, waving red flags to alert pedestrians and drivers. They became known as the “West Side Cowboys.” I am now fairly sure this term refers to a gay dance troupe out  of Chelsea.

The High Line fell out of use in the 1980s, and over the next two decades folks lobbied for a variety of different things: reinstating it as a railroad, tearing it down, turning it into a public space (which eventually won out). It’s now a public park featuring art installations and what-should-be-indigenous-to-Manhattan plants. The result is something fantastic – a garden and walking path a story or two above New York’s city streets. 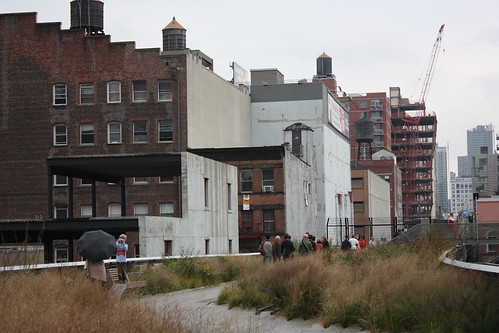 You end up feeling a little bit like something out of Mary Poppins, only with a closer proximity dumpsters and heroin (not in the park itself, though, which seems remarkably clean and safe). 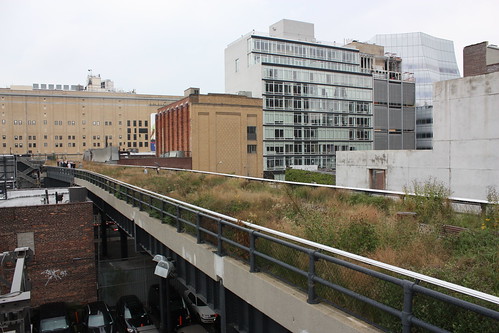 The height of the park also gives you some nifty views … 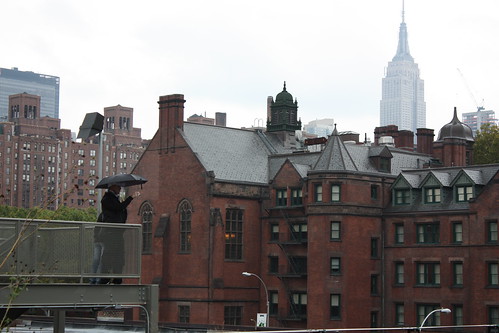 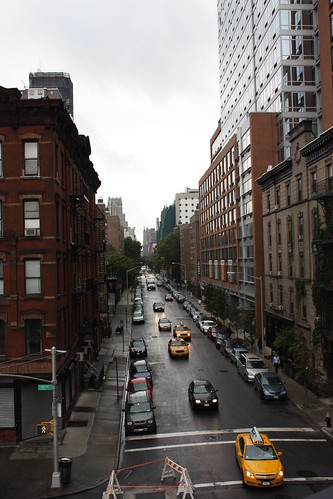 And provides some excellent light for photos, ensuring that you and the hubby look inexplicably refreshed despite the humidity and torrential rain: 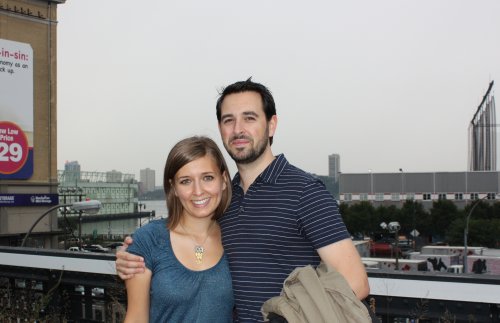 There’s a lot of entrances to the High Line, and figuring out which one to take can be a little tricky. We took the steps, but I presume there’s an elevator somewhere, since the park is supposedly stroller- and wheelchair-accessible. If you’re in Chelsea, I recommend checking it out (it’s open between 7 am and 10 pm daily). I’ll hope you get better weather than we (see? I’m not entirely evil), but even if you don’t, it’s a cool spot.