I can appreciate modern art. I won’t stand in front of a painting and discuss, seemingly to no end, the different elements of a painting, its composition, or what I thought the artist intended. But I will, on occassion, turn to my husband and say, “I like that.” And, often, he will reply with, “Me too.”

Of course, there are a lot of people who like to spend way, way too much time analyzing brush strokes and trying to determine whether or not the artist was constipated. I find these individuals equal parts annoying and entertaining. Sometimes, I want to join in with fake facts and nonsensical observations.

“Ah, you know Andy Warhol‘s father worked at a cannery, yes? And that Andy himself was deathly allergic to tomatoes? Thus, his Campbell’s soup can paintings represent both the fate he was convinced he’d have, and his own mortality.”

“Duchamp’s toilet was not about redefining art. It was an homage to his childhood pet, a mutt named Rover that had a weak bladder – hence, R. Mutt.”

The numerous art galleries in the Chelsea district of New York are made for just these sorts of blasphemous observations. (Note from Geraldine: It was at this point that I decided to finish this post, drunk, on midnight on Thursday in London. My apologies). Since all of the art is by relative unknowns, you can make up all sorts of crap, and odds are someone will buy it (your lies. Not the art). Here are just a few tidbits that you can choose to share:

There might be a slim chance that I’m being slightly disrespectful (ALSO, HOLY CRAP AM I DRUNK). But honestly, the pieces in the Chelsea art galleries are so completely out there, what else is left to say but absolute b.s.? Don’t get me wrong – it’s all delightful – but part of that delight comes from not taking any of it too seriously. Art is emotional, and that means it can be fun and silly and even absurd, at times. Plus, all of the galleries are free. So I say start making crap up, and enjoy the hell out of them.

Because, really, what else can you say when you see a video of the animatronic George Washington in The Hall of Presidents ride at the Magic Kingdom, over which the artist has superimposed a video of himself cracking a bullwhip? No, I’m not kidding: 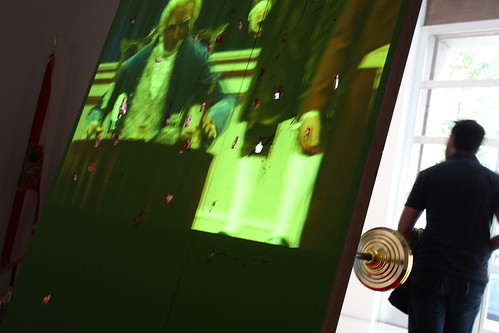 The artist also shredded the screen with buckshot. I can’t make this stuff up.

Or this piece, which my husband accurately and endearing named “Flying Building Guy With Helicopter Penis”: 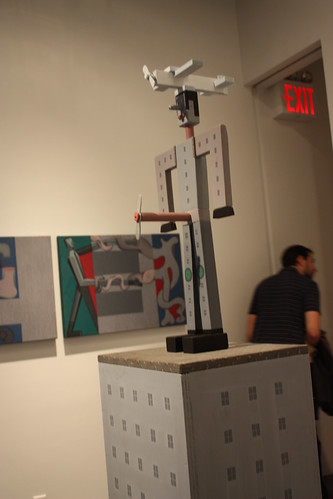 I love how Rand is sneaking around in the background of both of these photos, looking out for security guards.

Or these over-sized LED books, “reasonably priced” at about FOUR GRAND each: 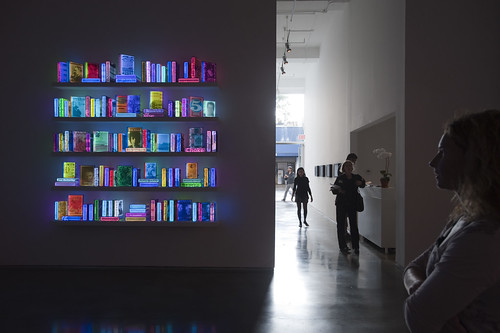 Photo courtesy of JulianBleeker, via Flickr.com

The galleries are clustered between 19th and 26th streets, and 10th and 11th avenues, on Manhattan’s west side (in Chelsea). The Chelsea Gallery Map has a useful layout of all of the different ones you can visit. Whether you need a laugh, some artistic stimulation, or just a healthy dose of “WTF” in your life, it’s worth a stop.