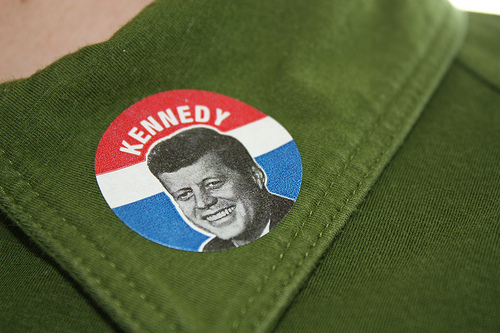 My cousin was born on the day of the moon landing, which makes it incredibly easy to remember his birthday. The day Aston was born is part of family lore: journalists came to interview my aunt in the hospital, thinking that she was going to name him “Astro.” Thank god, at the last minute, she came to her senses, and changed it to Aston. Except for a brief stint in middle school, where kids would say things like “Aston? So your ass weighs a ton?” (a particularly stupid insult, since he had a thyroid condition that made him very underweight), he fared fine. Better than he would have stuck with the name Astro. But I digress.

The newspapers made a big deal of the 40th anniversary of the moon landing. And Aston made a reasonably big deal about turning 40. I celebrated both: I went to San Diego for Aston’s 40th, and this past April, I went to the Kennedy Museum just outside of Boston.

But since I can’t really tell you to go celebrate my cousin’s birthday with him (I mean, I suppose I could … he’s a pretty friendly guy. But you’d have to wait until next year), I’ll just tell you about the museum.

Rand’s grandmother had been raving about it for years. We had to go. And frankly, I had absolutely no desire to see it. Really. I mean, an entire museum dedicated to Kennedy? Really? Was I going to be staring at his old governement files for hours? It sounded awful. We went, begrudgingly.

And holy crap am I glad we did. It was amazing. Seriously. Of course, it succeeded in part because of my incredibly low expectations, but still. Even the admission stickers were cool: I am stupid proud of the awesomeness of this photo.

The museum walks you through Kennedy’s entire career, from his campaign … … to the Democratic National Convention : There was also a video of the inauguration, which we watched almost in its entirety. Not because we are dorks, but because it was actually interesting.

… and even notecards from the infamous “Ich bin ein Berliner” speech. Notice that he wrote things out phonetically so he’d pronounced them properly. Unfortunately, his translator was a moron.

You’ve probably heard the background on this. If not, please watch Eddie Izzard’s brilliant account of it:

This all inevitably led up to his assassination, which was handled respectfully … Walking through it, Rand and I both independently noticed a lot of similarities between Kennedy and Obama. Sorry – if you find that oppressively cheesy, feel free to go to hell. It was simply that the way they addressed a country in turmoil was very similar, as was their overriding message of hope and optimism.

And, of course, there was Kennedy’s legacy. His promise to have a man on the moon by the end of the decade. Which seemed insane. And yet … … and now I never forget my cousin’s birthday. Go figure.

At this point, we were kicked out of the museum. No, seriously. The people who work there are total morons. Rather than warn you that the museum is about to close, and that you have, say, 15 minutes or a half-hour left, they simply walk through at closing time, with no warning, along with a security guard and push you all out. It was one of the most poorly organized things I had ever seen, and came across as totally ruthless. They need to work on this. Fortunately, there is still something rather incredible to see outside of the museum. Namely, the president’s sailboat: I know, probably seeing the photo, it doesn’t seem like a big deal. But seeing it there, on shore, but right next to the water – it just looked so lonely. We had just seen a video of JFK and a very young Bobby Kennedy playing around on the boat – they must have been in their early twenties, at the most. And despite having spent a few hours among his posessions inside the museum, this was more moving than anything else. Rand, as usual, put it best: Those other items were from his political career. This was from his life.